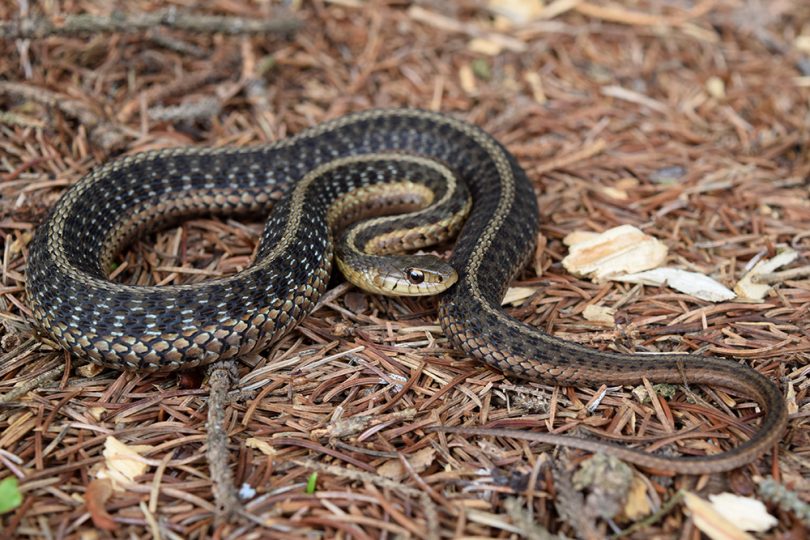 The gartersnake is one of the most common, widely distributed, and familiar of all North American snakes. It is found throughout Connecticut, sometimes in yards and even in urban areas. Photo credit Paul Benjunas/DEEP Wildlife Division (courtesy photo)

‘Leave them alone’ is the key piece of advice from the Connecticut Department of Energy and Enivironmental Protection (DEEP) regarding what to do if encountering a snake.

In addition to bears, which seem to be everywhere int town, snake sightings are common, and West Hartford residents often post photos of snakes on social media – questioning what type of a snake they’ve seen and what they should do about it.

This is the time of year when snakes are very active, the Connecticut Department of Energy and Environmental Protection (DEEP) said in a news release distributed last week, and they provided advice on what people should do if they encounter a snake either in their yard or on a hiking trail.

“Snakes are often needlessly killed by people because of mistaken identity, fear, and misunderstanding,” Jenny Dickson, DEEP Wildlife Division director, said in the press release. “If you unexpectedly come across a snake, the snake is likely as startled as you are. The best course of action is to remain calm. All snakes will retreat from humans if given a chance.”

Reptiles are important to the natural world, DEEP said, and are both predators – consuming small mammals and helping control the population of rodents and other pests – and are also prey for birds of prey and some mammals.

“Do not kill snakes that you encounter,” DEEP said, recommending observing snakes from a distance and allowing them to go on their way.

There are 14 species of snakes found in Connecticut, and most are shy and non-aggressive, DEEP said.

“The two venomous snake species found in Connecticut (timber rattlesnake and eastern copperhead) are not widely distributed, and most people are unlikely to encounter a venomous snake around their home.”

Even the venomous snakes, like the 12 other species, “will only bite if threatened or handled. If left alone, snakes pose no threat to people.”

Gartersnakes, which can be found in residential yards and near outbuildings, may sometimes enter buildings in search of food, and DEEP suggests the following method of removal:

“A pair of garden gloves is sufficient protection from gartersnakes, which prefer to emit an odor (musk) in defense but will occasionally bite when handled. All snakes have teeth; a bite on an unprotected hand is not dangerous but can break the skin and be painful and startling. The snake should be picked up carefully to avoid excessive squeezing. Snakes have delicate bodies and are easily injured. Place the snake in a cloth bag or bucket and release it in an area not far from the point of capture so the snake will be in familiar territory.”

While it’s rare to encounter a venomous snake in a residential area, DEEP said if that happens, leave it alone and allow it to move along on its own.

To keep snakes out of your homes and outbuildings, seal foundation cracks, and close basement windows tightly or cover them with screens, DEEP advises, noting that snakes can squeeze through small openings.

“If you wish to discourage snakes from your yard, remove the places where they can hide. Cut grass short, remove brush and rock piles, and trim shrubs up off the ground. This will also discourage the prey species snakes feed on making the yard less attractive to snakes,” DEEP said.

The DEEP website provides additional information about snakes in Connecticut, including an identification guide.

Photos of snakes can also be sent to [email protected] for identification assistance.