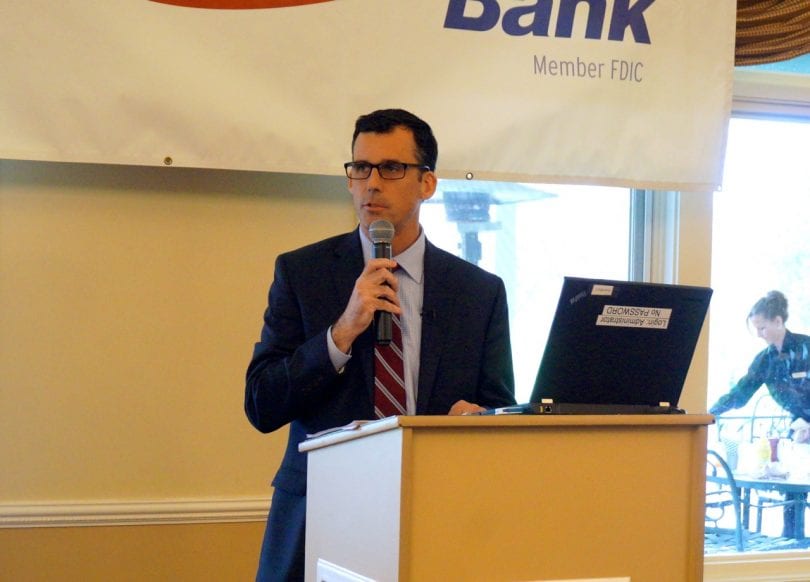 The economic development update is like a “Business Buzz” column on a monumental scale, and McGovern focused his presentation by answering these three questions: “What’s New? What’s Coming Soon? What’s on the Horizon?”

“We love our pets, don’t we,” McGovern said as he listed some of the new businesses to open in West Hartford since he gave his last presentation. New pet-related retail establishments include Dogology on Sedgwick Road, Woofgang in Blue Back Square, and a second Pet Valu store that recently opened in Corbin’s Corner.

“We also love our beverages,” McGovern said, noting the opening of Total Wine in Corbin’s Corner and the third Harvest Fine Wine & Spirits store on New Britain Avenue in Elmwood.

“Lots of new restaurants,” said McGovern. Since his last update in March 2016, he said, Bar Louie has opened in Blue Back Square, as has a second Goldberg’s location and INDIA restaurant.

Farmington Avenue in the Center is now home to Hartford Baking Company’s second location, and LaSalle Road has added Noble & Co. (same ownership as McLadden’s) and Savoy, which is part of the Max Restaurant Group.

In Elmwood, New Asia has moved across the street, and on New Park Avenue there is Chick-fil-A. “I’m sure there are others here in the room that went there three times the first week they were open like me. You can admit it,” McGovern said.

“As we discussed last year, there are lots of restaurants but also lots of places to work off those pounds,” McGovern said. Health and fitness businesses have proliferated throughout town, among them Orangetheory, Pure Barre, Starr Yoga, and Fearless Fitness.

Newly opened “instruction” businesses include GOLFTEC and the New Old School of Music, both in Elmwood.

“You saw an number of trends there, and I think everyone’s a little disappointed that we don’t have more new retail in terms of stores, but it’s a changing environment for retail for sure, people are buying things differently, and in the meantime we have plenty of options to work out and invest wisely,” McGovern said.

New residential development in the past year includes 2432 Albany Ave., called Bishops Place, which opened in August and is fully leased. The new condos at 777 North Main are selling well and the second building is under construction.

The new 243 Steele Road apartment complex is “leasing faster than they can build the units,” McGovern said. The development will eventually include six residential buildings (two are still being constructed) and a clubhouse. As of now there are 110 units with temporary certificates of occupancy, but leases in place for 125 units.

Kingswood Place, The Landmark, and the 84 units of assisted living and memory care at Brookfield/Chatfield are also new residential projects completed in the past year.

The grand list increased $259 million, or 4.3 percent, due to a combination of revaluation and new projects. Between the two, $10 million of revenue to the town budget was generated. Commercial property values on average increased a staggering 24 percent, McGovern said, with about 30 percent increase for apartments.

Exciting news for the future includes the Corbin Collection in the former Sears and Sears Auto Center buildings in Corbin’s Corner, a project that was approved by the Town Council in January.

Already announced tenants for the Corbin Collection are the new-to-West Hartford retailers Saks Fifth Avenue Off 5th and Shake Shack, as well as the move of REI from Blue Back Square.

Joining those businesses will be Cost Plus World Market – an international bazaar which according to its website offers original and high quality items from around the world for a small percentage above cost, including “eye-catching, trend-setting home accents, an awe-inspiring array of international foods.”

Cost Plus World Market has more than 270 stores nationwide, but the Corbin Collection store will be the company’s first in Connecticut. It will be located on the lower level of the building that will include REI and Saks Off 5th.

Cost Plus World Market is owned by Bed, Bath & Beyond, Inc. – as is the Christmas Tree Shop and several other retailers, another of which – buybuy Baby – will also be opening in the Corbin Collection.

Buybuy Baby, which according to its website provides everything that new and expectant parents “need to confidently welcome their baby and navigate the transitions of life as a family,” will open its second Connecticut store on the lower level of the REI and Saks Off 5th building. An existing store is located at Connecticut Post Mall in Milford.

Permits for the Corbin Collection have just come in this week, and McGovern said demolition and construction should begin soon with a planned opening date for the development of mid-2018.

Turing toward food, McGovern said, “The pace of restaurant openings in West Hartford has not slowed down the slightest.”

Park Road will be adding 0 Degree Ice Cream, a great re-use of a long vacant building at 120 Park Rd., as well as Zaytoon’s Bistro.

“We’re going to have a distinct Mexican flair in Bishops Corner,” McGovern said, noting the planned opening of Ocho Café (which has the tagline “tacos and tequila”) as well as Moe’s – both coming in May.

The many planned restaurants in the Center, which have been announced, include Zohara on Farmington Avenue, and right next to that will be Donut Crazy.

“Hand-crafted doughnuts with love – I don’t know if it can get any better than that,” McGovern said.

Also opening in the Center will be Milkcraft and Vaughan’s Pies and Pints on Farmington Avenue, and Harvest Wine Bar and Division West on LaSalle Road.

In Blue Back Square, Cook & the Bear is getting closer to opening, McGovern said.

McGovern provided a few surprises – including the planned opening of Deadbolt Bar & Grill across from the existing REI store at 63 Raymond Rd., in what has been the temporary Delamar West Hartford Hotel office that was formerly GNC.

Deadbolt Bar & Grill will pair up with a new business in the “fun and games” category, McGovern said. It will be the same ownership as Skeleton Key, which will take over the former Verizon store on the corner.

Skeleton Key is an escape room concept and the two businesses will be connected internally through a door. “They wanted to be able to combine it into one operation but our zoning regulations do not provide for indoor recreation and food working together easily,” McGovern said.

Mission Escape, which will soon open above Bricco, does not serve food or drink as part of its business model, so that was not an issue.

McGovern said that the town needs to find out a way to facilitate more of the new types of entertainment businesses and also provide a full experience of food and drink to go with it as well.

He said that at the Town Council direction, his department is working on a draft ordinance that will look at how some spaces will be able to combine uses that haven’t been combined in the past. The space that REI will vacate in Blue Back Square, as well as the former Walmart Neighborhood Market in Bishops Corner, could make use of that additional flexibility, he said.

Other new construction includes the Companions for Living office that broke ground just last week, an eight-unit condominium complex with underground parking at the intersection of Farmington Avenue and Arlington Road that will be developed by ARDG, LLC, and the Gledhill Estates open space development on Mountain Road that recently received wetlands and special use permit approvals.

What’s on the Horizon?

Transit-oriented development is what is being pursued on New Park Avenue – a mixture of housing, office, retail, and other amenities integrated into a walkable neighborhood near quality public transportation.

“We’ve got the transit,” McGovern said, noting the just-celebrated two-year anniversary of CTfastrak, as well as the Hartford-Springfield rail line which is scheduled to begin service in January 2018.

A station, once built, will “really be transformative for West Hartford,” McGovern said.

The design phase for West Hartford’s railway station is funded, he said, but the construction is likely a few more years out. The station will be contiguous and just across the tracks from the Flatbush Avenue CTfastrak station.

Cumberland Farms has also opened recently on the corner of New Park and Flatbush, and although it’s certainly not transit-oriented development, it cleaned up a blighted corner and is proving very popular.

On the south end of the New Park corridor, McGovern said, is 616 New Park, Trout Brook Realty Advisors and West Hartford Housing Authority’s 54-unit mixed-use, mixed-income development now under construction that should be completed by the end of 2018.

There’s also the potential Gastro Park. The Town Council recently passed a food truck ordinance, which paved the way to allow food trucks to park on low-volume streets or as an accessory use in industrial zones, and also permits food truck parks.

A concept has been brought to the town by Iron & Grain food truck owner Tate Norden, McGovern said, and has identified a property at 637 New Park Ave. “It’s an exciting opportunity,” he said.

With good things happening on the north and south ends of New Park Avenue, McGovern said, “Now we’re trying to pull it all together.”

The completed study will be used to seek grant funding, McGovern said.

On the horizon in the Center, McGovern said, is the review of zoning.

“We have demand to build multi-family housing in the Center,” McGovern said, but the challenge of the zoning and the allowable floor-to-area ratio doesn’t allow enough flexibility for these developments to have enough parking.

After the failure of two proposed ordinances last year – one brought by the town and the other by a developer – an outreach process that has been underway since the fall is nearly done and a report will be submitted to the Town Council by the end of next week.

Public input, which has been greater than expected, indicates a desire for responsible and smart growth and a solution for parking issues.

The other major prospect for the future will be what to do with the UConn campus, which the town will take ownership of in October following a deal that was struck this week for the town to purchase the 58-acre parcel and buildings for $1 million.

Conversations with the community about desired uses for the UConn property haven’t been able to take place because due diligence was continuing, McGovern said. Those discussions will soon begin.

“I think we’ve reached a point where our feeling is given the liabilities on the site, that the west side should be developed and if we were to do that we would have potential revenue to develop the east side for more recreational facilities,” McGovern said. That will be the backdrop for the discussion.

Although there has been major grand list growth, McGovern believes there are still opportunities for transformative development in The Center, at UConn, and on New Park Avenue.

“Are we reaching a restaurant bubble? I don’t know,” McGovern said. “But I think everyone in this room is going out to dinner more and more.”

McGovern noted that Money Magazine rated West Hartford the 15th best place to live among small cities in the country last year. “That tells me things are going pretty well.”