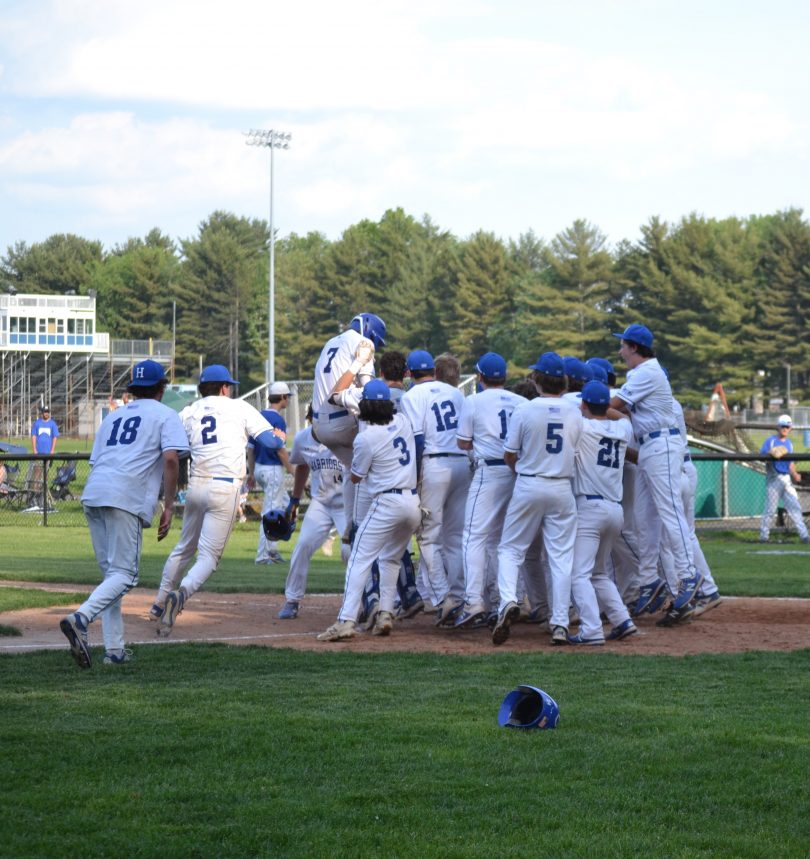 Tucker Redden is mobbed by teammates as he jumps on home plate following his game-winning home run. Hall vs. Newtown, Class LL first round. May 31, 2022. Photo credit: Paul Palmer

Hall hosted Newtown in West Hartford Tuesday afternoon in the the first round of the CIAC Class LL baseball tournament. 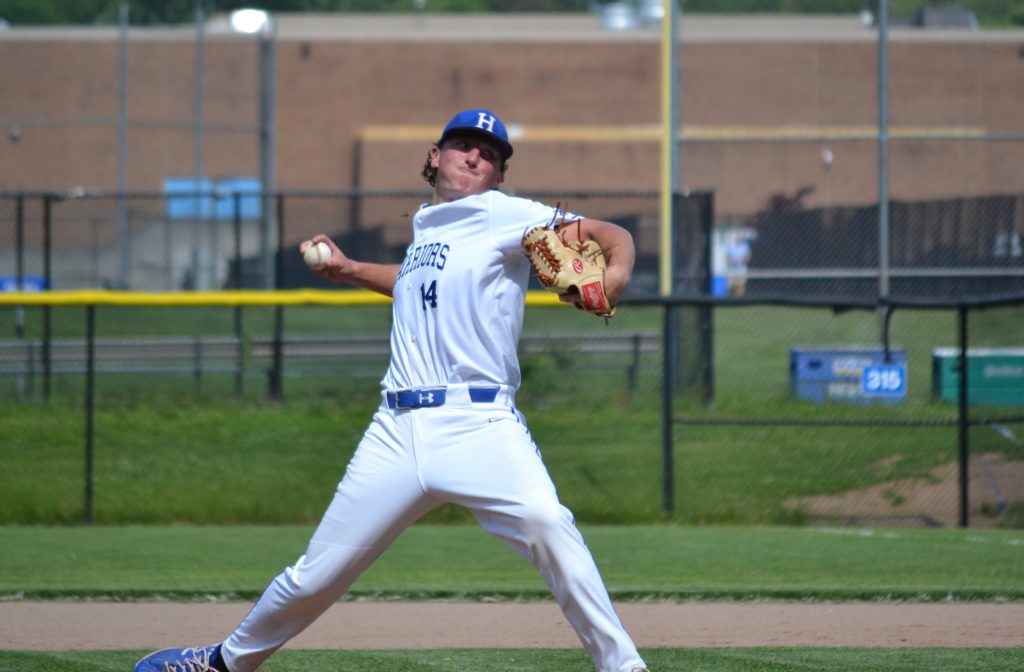 A pitcher’s duel that ended with a big bang in the bottom of the seventh inning moved Hall into the next round of the Connecticut Interscholastic Athletic Conference (CIAC) Class LL State Baseball Tournament.

Under a blistering sun in West Hartford, Hall’s Joe Dooley and Newtown’s William Burns were locked in a head-to-head duel, matching strikeout for strikeout for six innings. Both would finish with 10 strikeouts, but the moment of the game would belong to Hall senior Tucker Redden.

With two outs in the bottom of the seventh, Redden took 2-1 pitch of reliever Nick Tetrault over the left field wall with a no-doubt three-run home run to give Hall the 4-1 win. 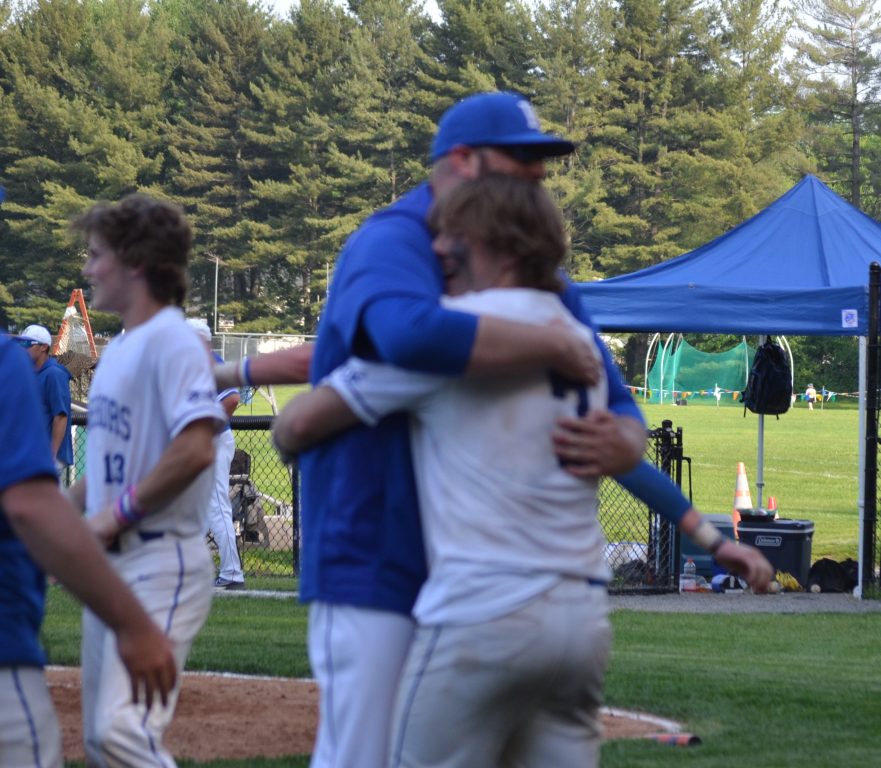 Dooley, who threw 90 pitches in the game, including 19 first-pitch strikes, set down the side in order in the first with three strikeouts. Burns got two of his own in the bottom of the first and the tone was set for most of the game.

The bottom of the second saw Hall push across its first run of the game. Tommy LaSpada led off with a single and was forced out at second on James Renda’s fielders choice. After a strikeout, Will Gaumer inside-outed a pitch to right field to score Renda who had stolen second base. 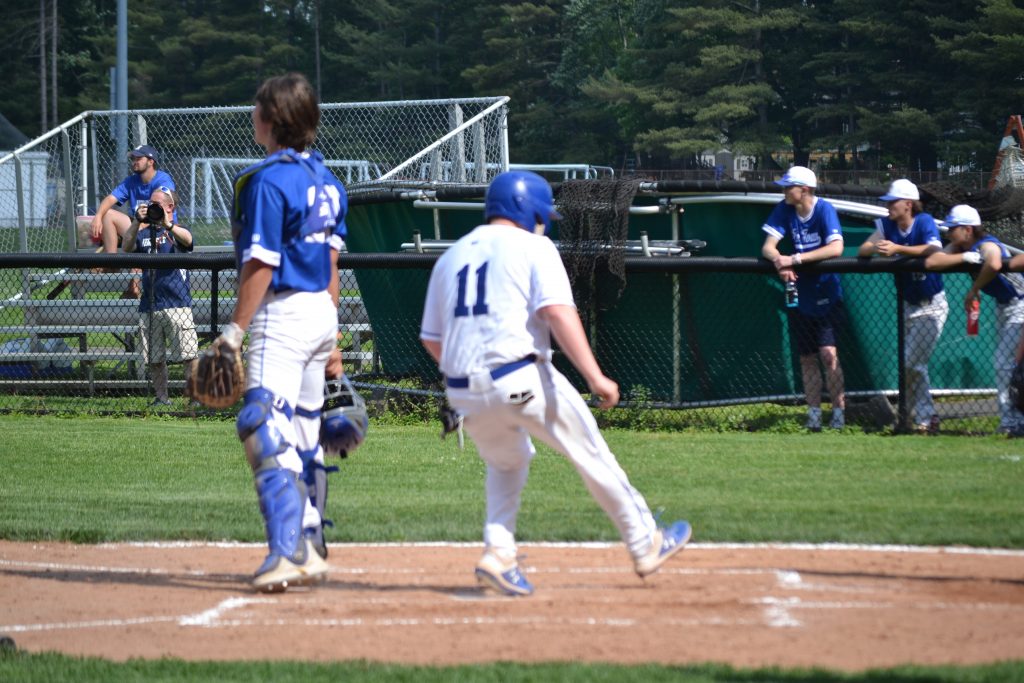 In the top of the fourth, Newtown looked to be putting something together after Josh Rosen led off with a single. But he would be picked off by Dooley, before Matt Pietrorazio singled back up the middle and Alex Kasberian doubled to left. With runners on second and third, Dooley struck out Evan Nikolas to end the threat and hold the 1-0 lead.

Hall looked ready to add to the lead in the bottom of the inning. Alex Ciafone reached first on a throwing error. He stole second and moved to third when the throw was not handled at second. But Burns would strike out the next batter, issue a walk, and then get two more Hall hitters to strikeout to end things.

In the top of the sixth, the Nighthawks would use an error and a single to tie the game. After getting the first two outs of the inning, Dooley induced a fly ball to left that Ciafone could not track down and Pietrorzaio would end up at second. Chad Argaves followed with a clean RBI single to left to tie things at 1. 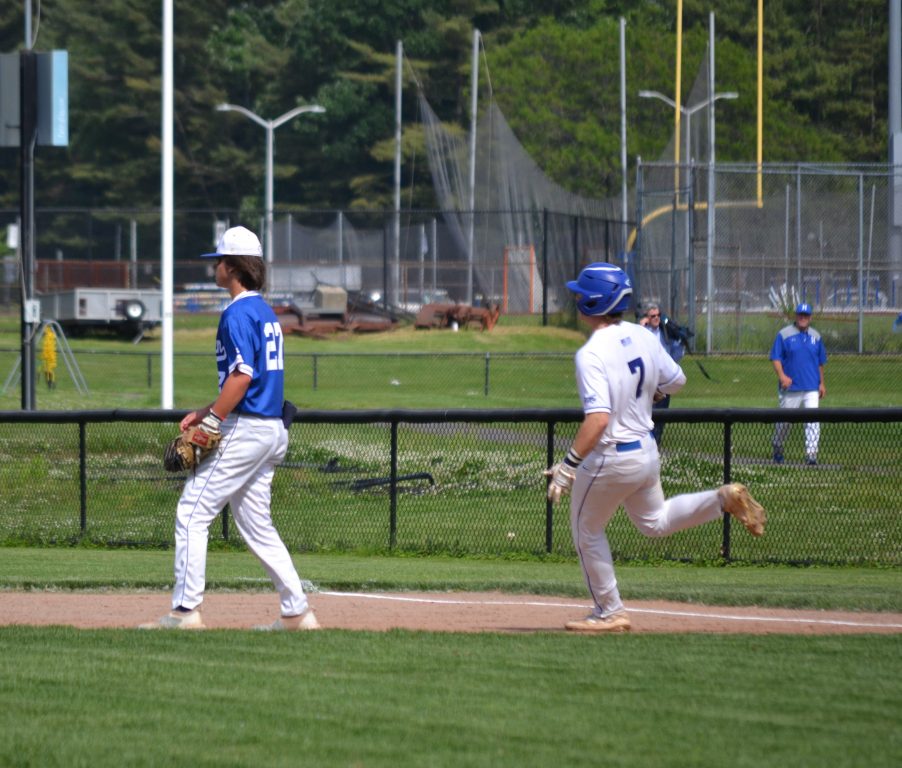 Tucker Redden rounds first base after his single in the first. Hall vs. Newtown, Class LL first round. May 31, 2022. Photo credit: Paul Palmer

Heading into the top of the final inning, Dooley opened by striking out pinch hitter Logan Akbas. Catcher Hayden Conklin then hit a dribbler towards third. Ixael Albino made the only play he could – barehanded it and threw to first. Conklin was called safe, when the umpire ruled that Gaumer was pulled off the base by the throw. The home plate umpire then called a conference, and then ruled Conklin out at first.

It was similar to a play in the previous half inning when Ciafone was called out at first on a ground ball to shortstop. The high throw to first appeared to pull Finn Geisler off the bag, but Ciafone was called out. Hall coach Nick Marsh had a conversation with the first base umpire and the umps had a conference, but this time upheld the call.

In the Hall half of the seventh, the Warriors had a pair of chances to win now that Burns was out of the game for Newtown. With one out, Brian Chelli – who played a solid game in center field, walked and then stole second. Cole Kocienda then delivered a single to center field that Yarema Stastyshyn played on a single hop. Marsh never hesitated in sending Chelli home, but Stastyshyn made a perfect throw on the line to nail Chelli at the plate. Dooley would follow with a walk to put runners on first and second. 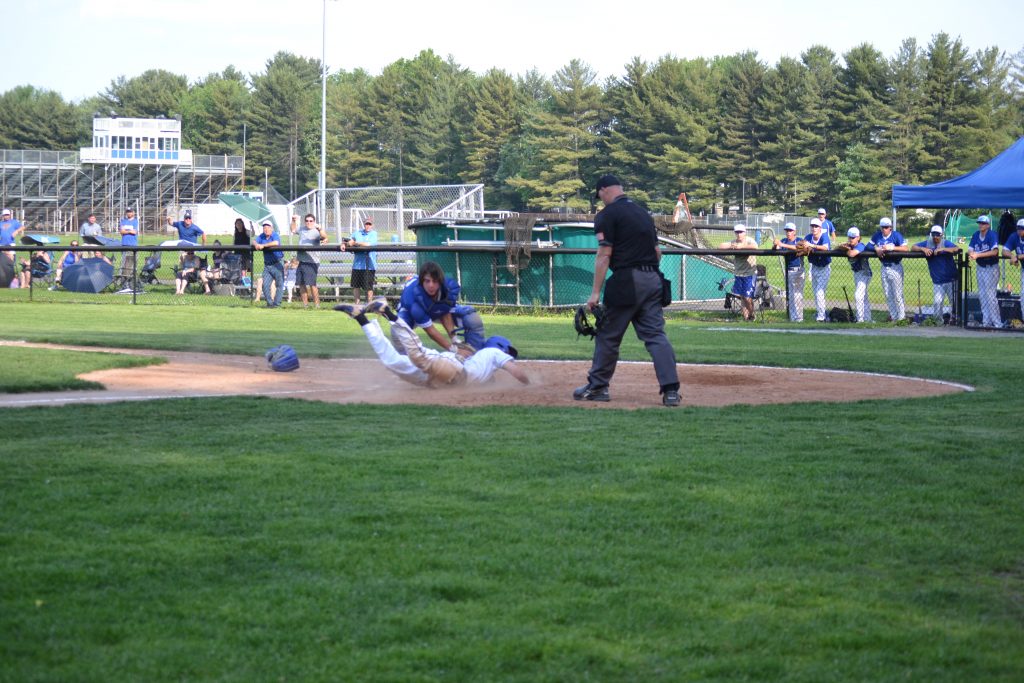 Then it was time for Redden to play the hero with his blast over the left field wall that ended the game at 4-1.

Hall, now 14-7 on the season, is back in action Wednesday when the No. 13 Warriors will travel to No. 4 Southington for the second-round matchup in Class LL. The 18-3 Blue Knights won the only regular season matchup between the two, 6-2, in April. 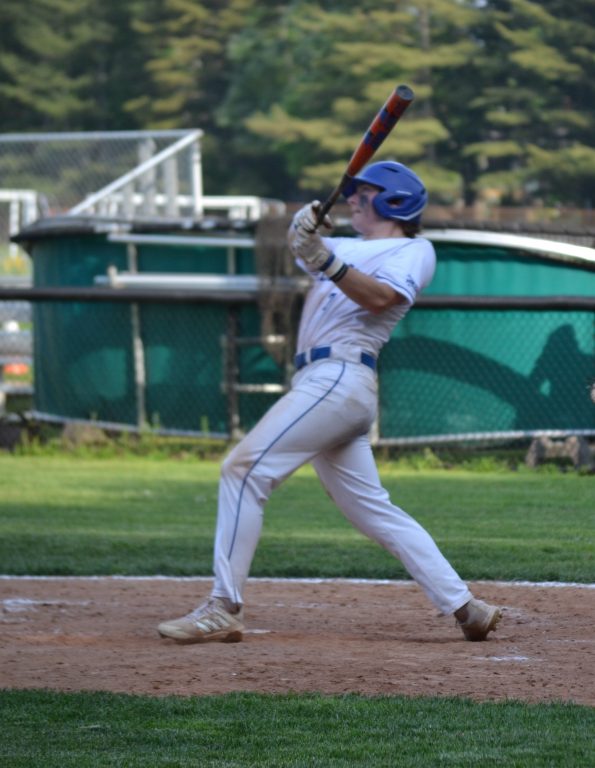 Tucker Redden follows through on his 2-out, 3-run game-winning home run. Hall vs. Newtown, Class LL first round. May 31, 2022. Photo credit: Paul Palmer 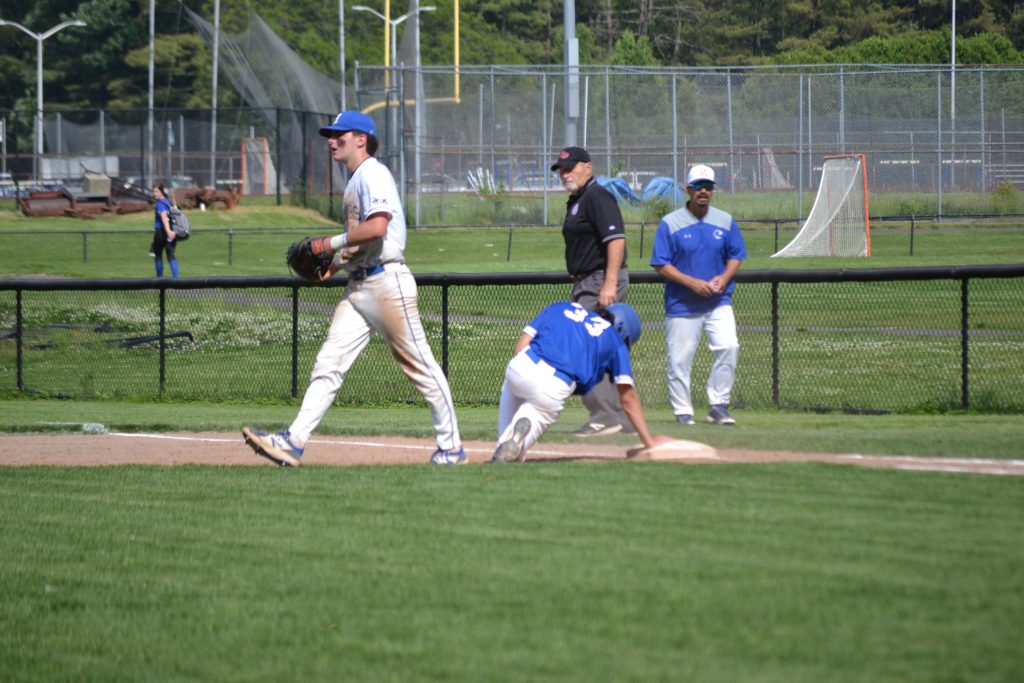 Newtown’s Joshua Rosen is picked off at first by Joe Dooley. First baseman Will Gaumer made the tag. Hall vs. Newtown, Class LL first round. May 31, 2022. Photo credit: Paul Palmer