A Connecticut State Police vehicle was heavily damaged after a collision with another vehicle in West Hartford on Wednesday. 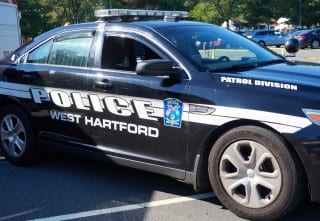 A vehicle being driven by a Connecticut state trooper was heavily damaged Wednesday when another vehicle turned into its path at the intersection of South Main Street and New Britain Avenue, police said.

According to West Hartford Police Capt. Jeff Rose, Trooper Paul Gunn was behind the wheel of a 2013 Ford Taurus cruiser that was headed north on South Main Street. He was proceeding straight through the intersection with New Britain Avenue when he was hit by a 2009 Honda Accord driven by Doreen Bottone.

Police said that Bottone was headed south on South Main Street and was turning left to travel east on New Britain Avenue when she collided with the state police vehicle.

Both vehicles sustained heavy damage, and although police said that both drivers were “shaken up,” there were no reported injuries. Both vehicles were towed from the scene.

Trooper Gunn was not on duty or involved in any police activity at the time, Rose said.

Bottone was given a ticket for failure to grant right of way while making a left turn.