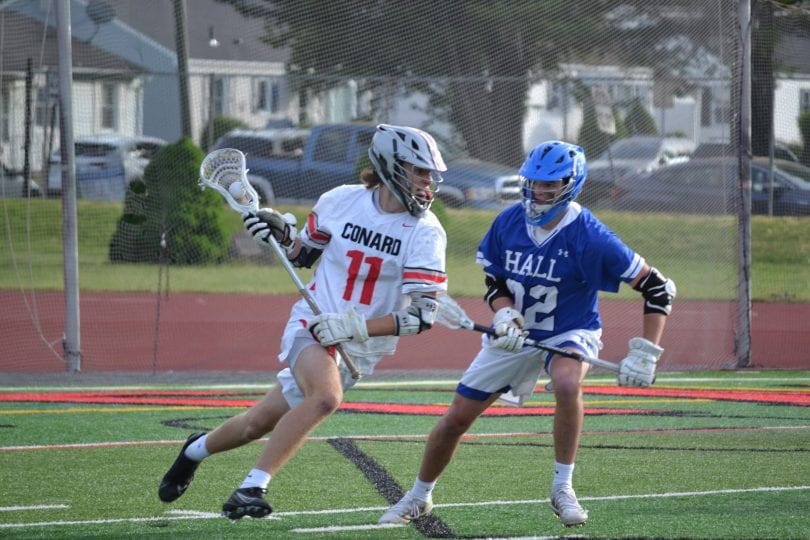 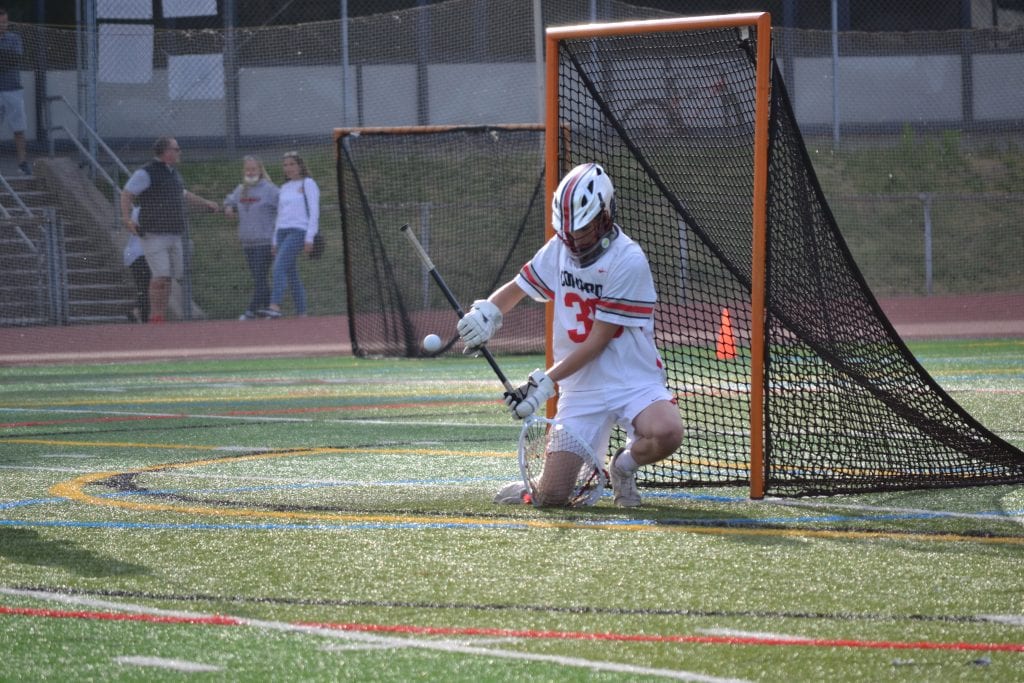 When it is Conard and Hall facing off in any sport, neither team needs to look far to find motivation. The crosstown rivalry games are some of the most intense of the season for both schools.

Tuesday on the turf at Conard, the Chieftains’ boys lacrosse team was looking to finish a disappointing season on a high note by beating Hall. For the Warriors, the message from head coach Jared Kirkorian was simple as he gathered his players before the opening face off: “Our tournament starts now!”

Hall, which will finish in the top 10 in Class LL and host a first round tournament game, took his charge, and converted it into an 11-5 win.

Senior attack Luke Duzan was the scoring hero for Hall (11-3) with five goals and an assist. But the early part of the game belonged to the goalies for each team. 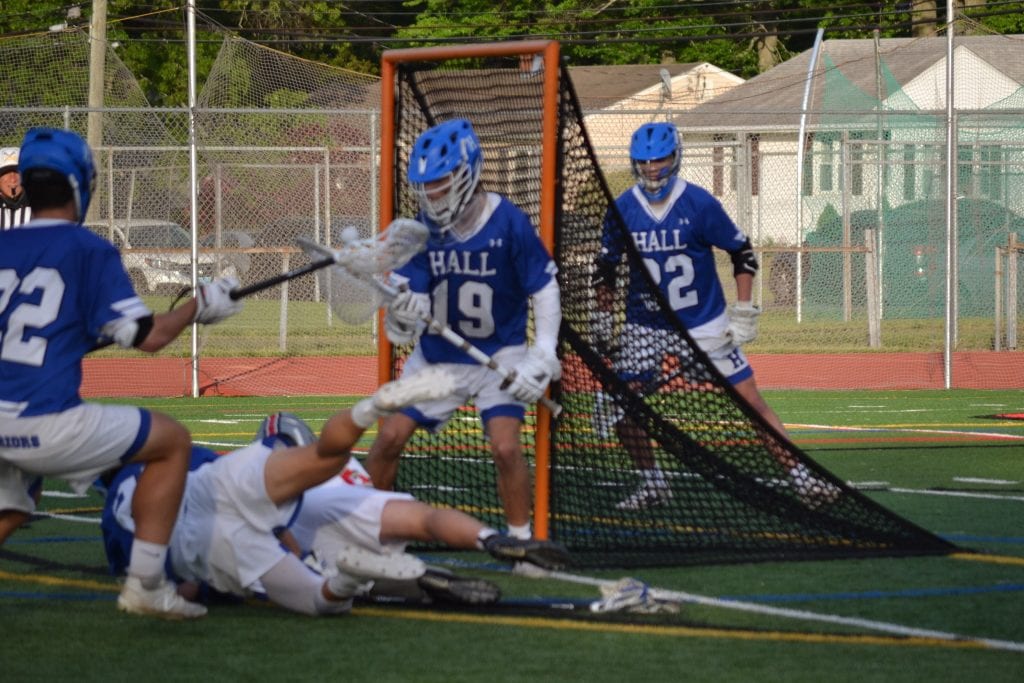 Hall goalie Campbell Manolis focuses on the save as players pile up in front of him. Conard vs. Hall boys lacrosse. May 25, 2021. Photo credit: Paul Palmer

Campbell Manolis of Hall and Trevor Dalton of Conard matched save-for-save as the game got off to a fast start. Dalton, just a sophomore, was especially sharp on an early effort by Hall’s Teddy Gianoullis, and then stopping Duzan in close, and deflecting a rebound try over the net. At the other end, Manolis made his best save on Aidan Shaffer’s bid.

Conard got the game’s first score with 2:30 left to play in the opening period. After a Hall turnover, Baden Krisst (2 goals), would beat Manolis with a low shot to make it 1-0. But just 18 seconds later, it was Duzan getting his first of the game on a nice feed from Logan Murphy. That would be all the scoring in an entertaining opening 12 minutes. 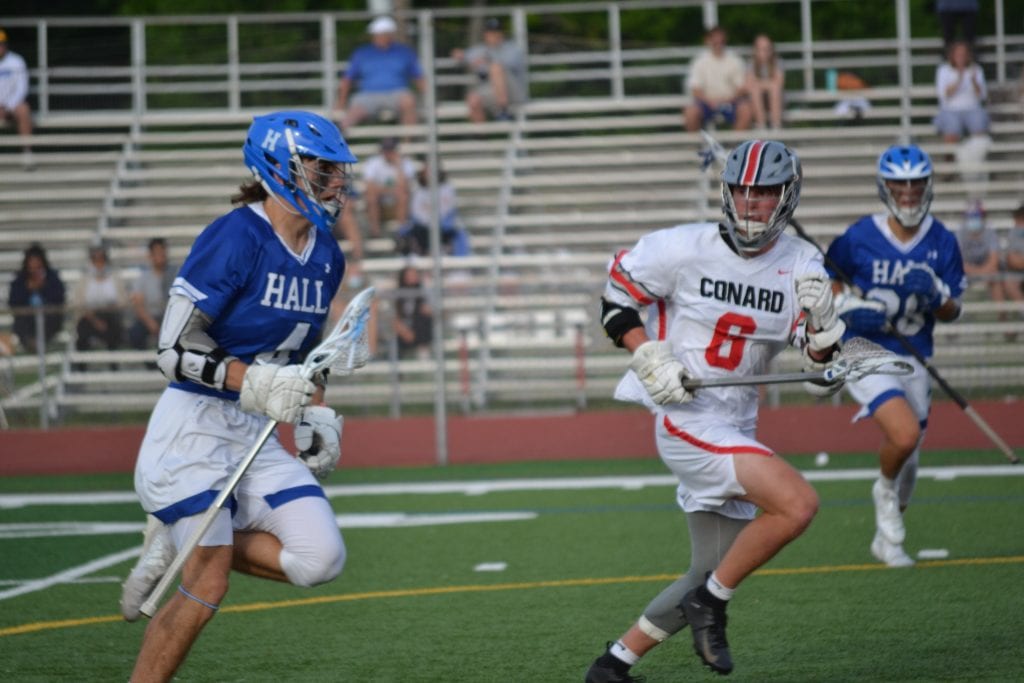 “We played how we wanted to play, and it left us in it,” said Conard head coach Matt Cersosimo.

While Cersosimo might have liked the start by his team, Kirkorian was not happy with the level of enthusiasm shown by the Warriors. “We came out a little unexcited,” he said. “In the crosstown rivalry game, everyone should be at a 10 on the excitement meter.”

Apparently, his team took his instructions to heart as 20 seconds into the second, it was Dalton being forced to once again stand tall when he stopped Brooks McConnell from in close. Then the momentum started to shift, and Hall would reel off three times in just under 3:30 minutes to start building the lead. 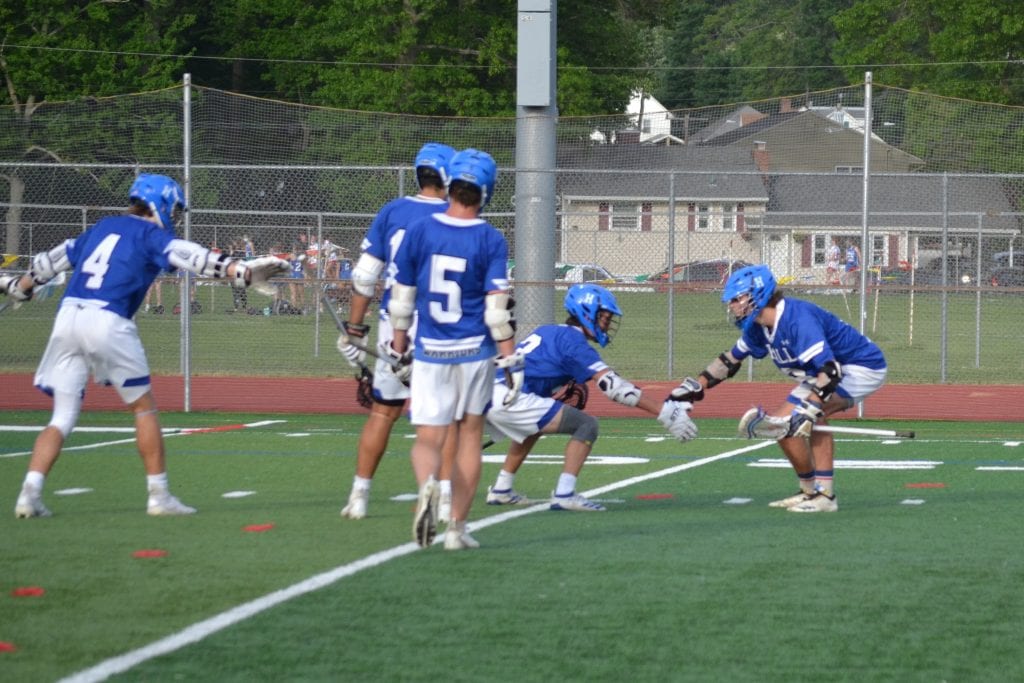 Sophomore attack Grant Kanaga got the first one with 8:43 to play in the second. Kanaga then assisted on Duzan’s goal. While Conard was playing down a man with 7:14 remaining, Duzan would do it again as he cut across the crease and fired a shot that beat Dalton.

Despite the three-goal deficit, Conard kept fighting. Senior middie Namar Gaynor picked up a loose ball and with a full head of speed charged down field, running over a would-be checker, and crashing the Hall crease before having the stick and ball dislodged from his hand. On the defensive end, Rowan Sierra and Harrison Sweeney played strong, physical games. 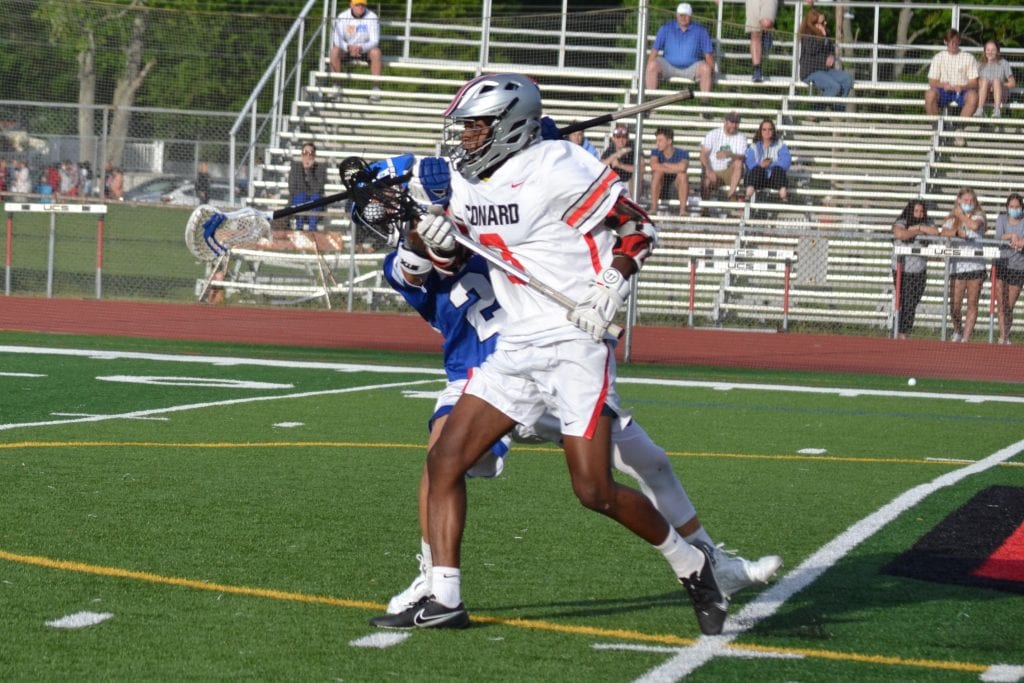 Each team would score once more before the second period ended – Aidan Guzman (two goals) pushed Hall’s lead to 5-1 with just under 3 minutes to play, while Conard’s Owen McGoldrick (two goals), scored his first with just 24 seconds to play.

With it still being anyone’s game as the third period began, in a 90-second span the Warriors would put the game away. Twenty-nine seconds into the period, Gianoullis fired a pass from behind the net to Duzan, who scored. Then the two switched roles and Duzan fed Gianoullis for the goal. 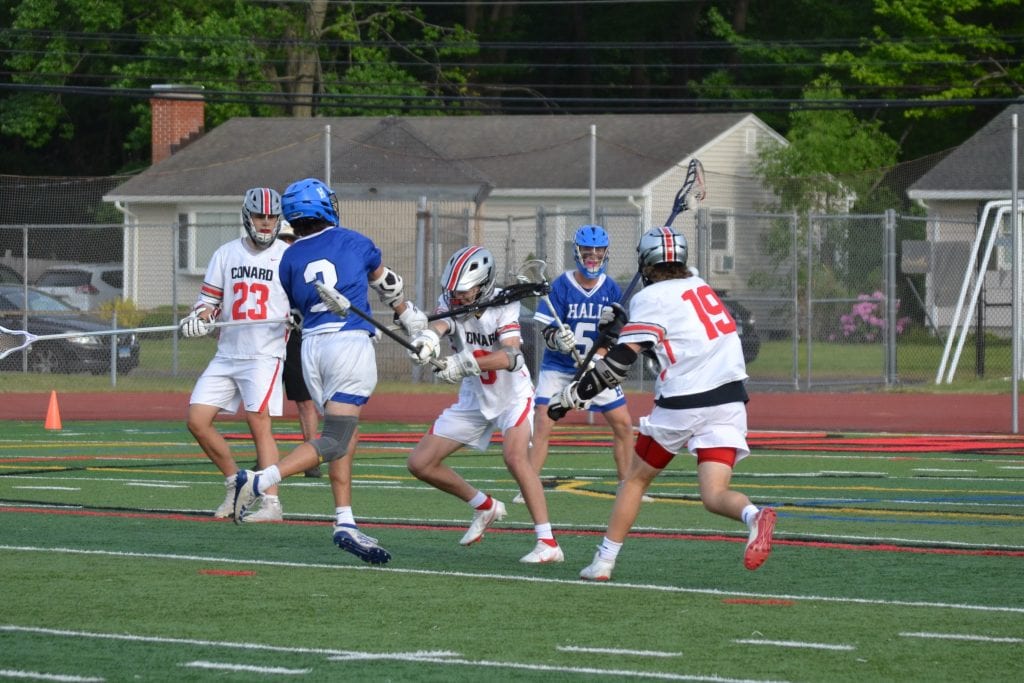 Hall’s Teddy Gianoullis gets his shot off as Conard defenders close in during the Warriors’ 11-5 win Tuesday. Conard vs. Hall boys lacrosse. May 25, 2021. Photo credit: Paul Palmer

Guzman made a solid run through the Conard defense, and scored Hall’s third of the period, and just like that the Warriors’ 5-2 halftime lead was now 8-2. Hall pushed it to 10-3 before the period was over, and Kirkorian saw a team that was playing the way they should be heading into the state tournament. “That energy to start the third, that is what we need for states,” he said.

Kanaga would get his second of the game with 5:24 in the final period when Matt Farber found him cutting  in unmarked, fed him the ball, and Kanaga buried the shot to the far side of the net. It would have been easy for Conard, which had won just twice all season, to fold at that point, but they refused to go quietly.

Off a scramble in front of the Hall net, Krisst scooped the ball, and found a virtually empty net as Manolis had moved out to try and field the loose ball. Following a timeout, Shaffer scored on a nice pass from his hockey team teammate McGoldrick.   But that was as close as the Chieftains would come, and Hall would take the game by 6.

Asked about  his team’s fourth quarter effort, Cersosimo saw it as a metaphor for the entire season. “Resilient,” he said “That fourth quarter was like our whole season and what kind of team we are.”

Cersosimo talked with his team after the game and his message was simple. “I told them all how proud I was of all of them.”

Hall will find out Thursday who they will host in the first round of the Class LL playoffs, In the meantime, Kirkorian will keep his team sharp at practice and focus on the mental game. “We have to have the drive to play a full 48 minutes,” he said. “We need to focus on our patience on offense. We have a lot of talented players, but we just play rushed sometimes.” 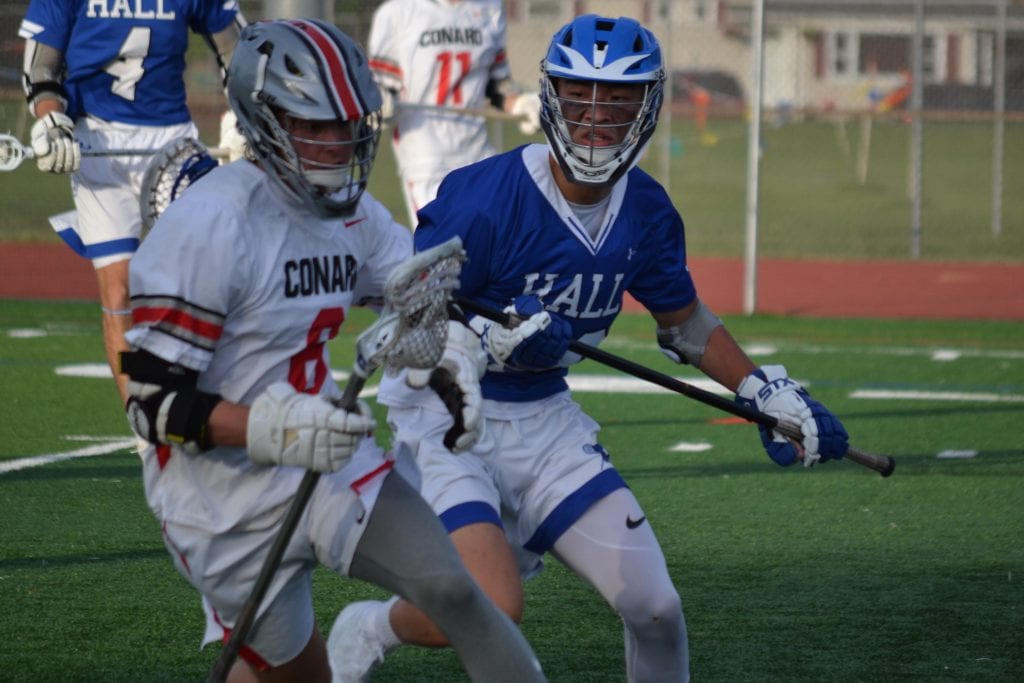 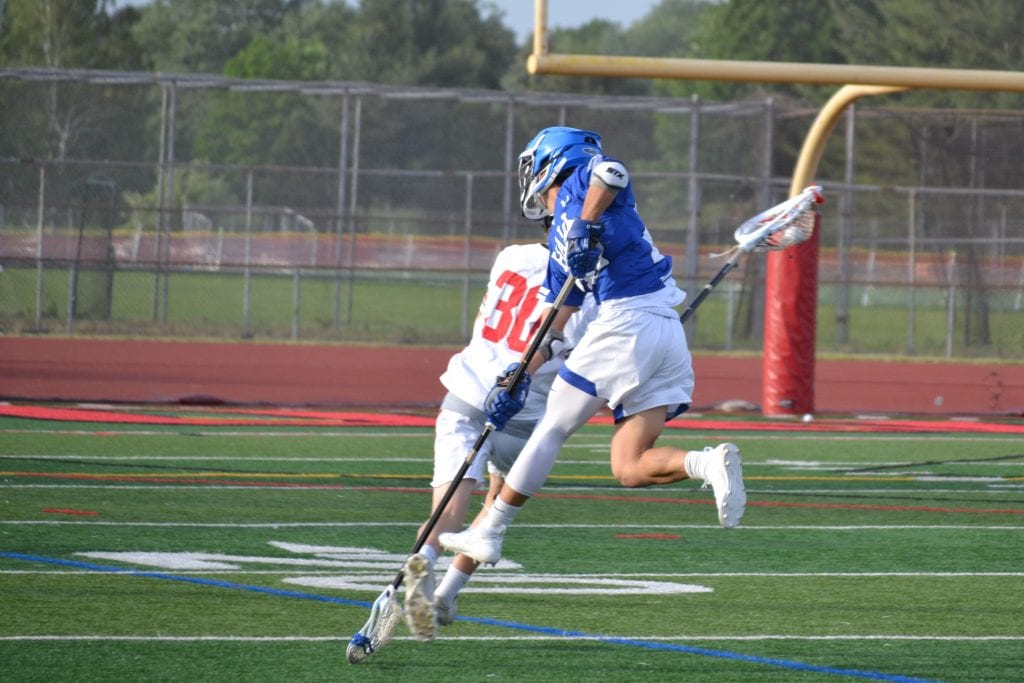 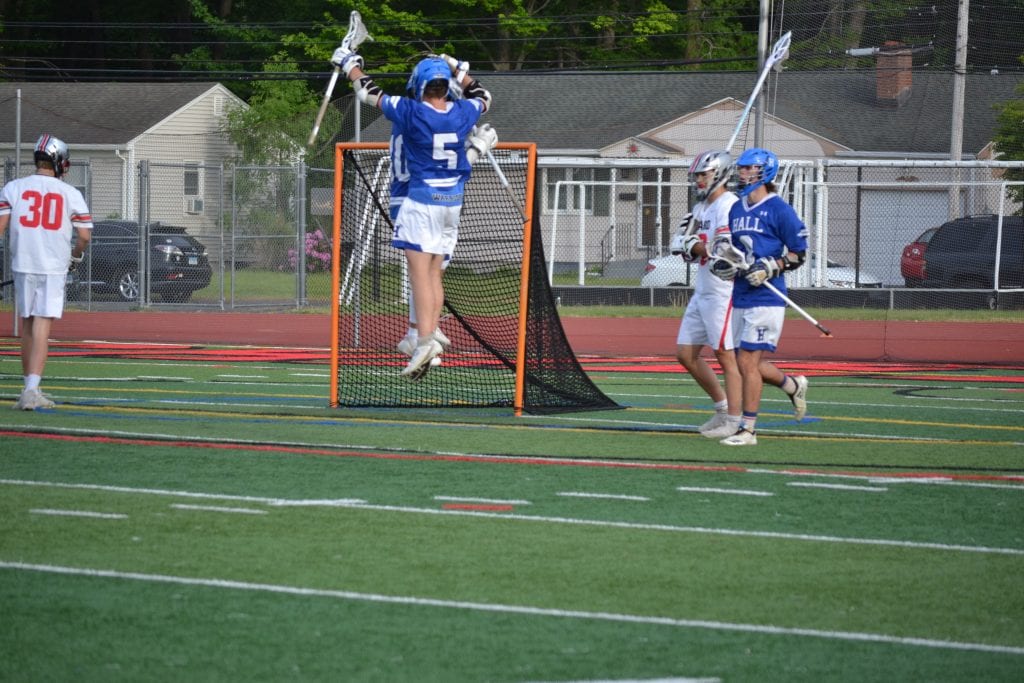 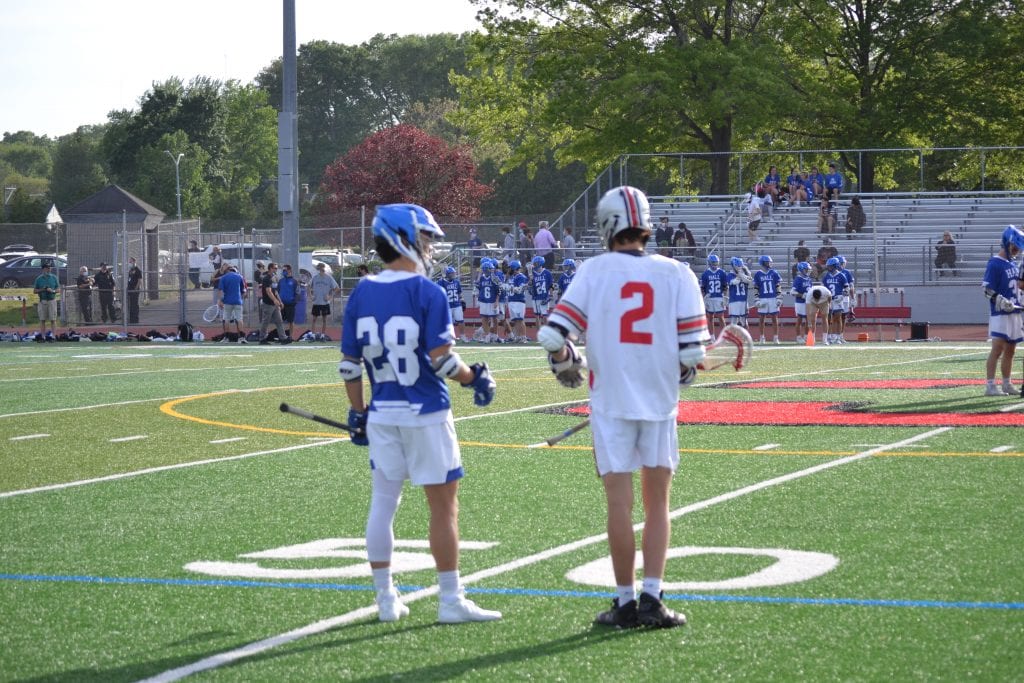 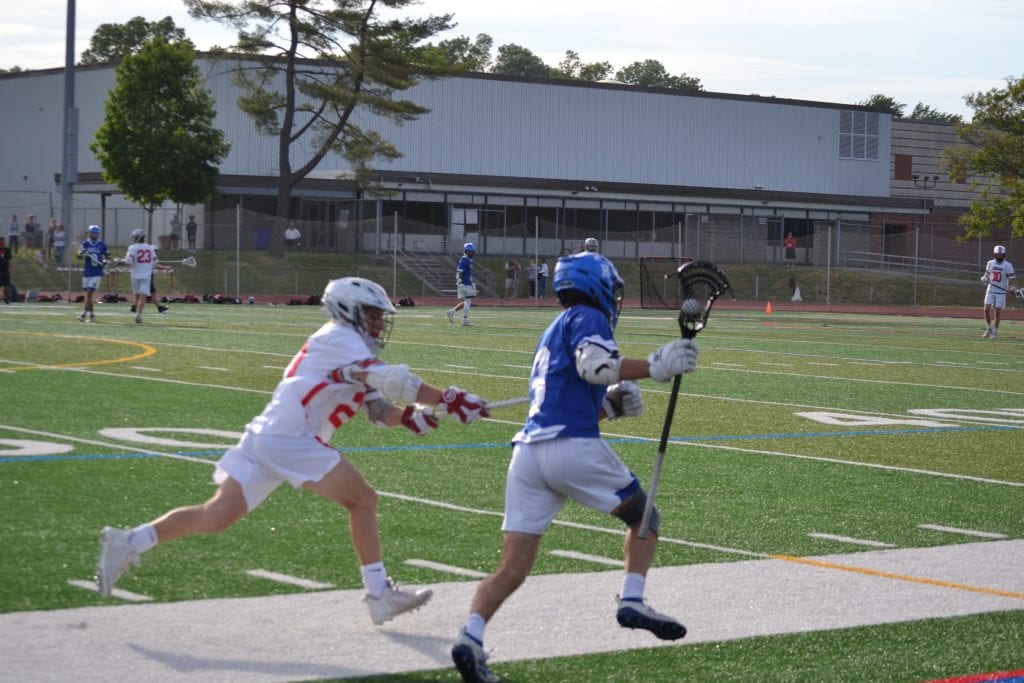 Hall’s Teddy Gianoullis gets around a Conard defenders in the Warriors’ 11-5 win Tuesday. Conard vs. Hall boys lacrosse. May 25, 2021. Photo credit: Paul Palmer