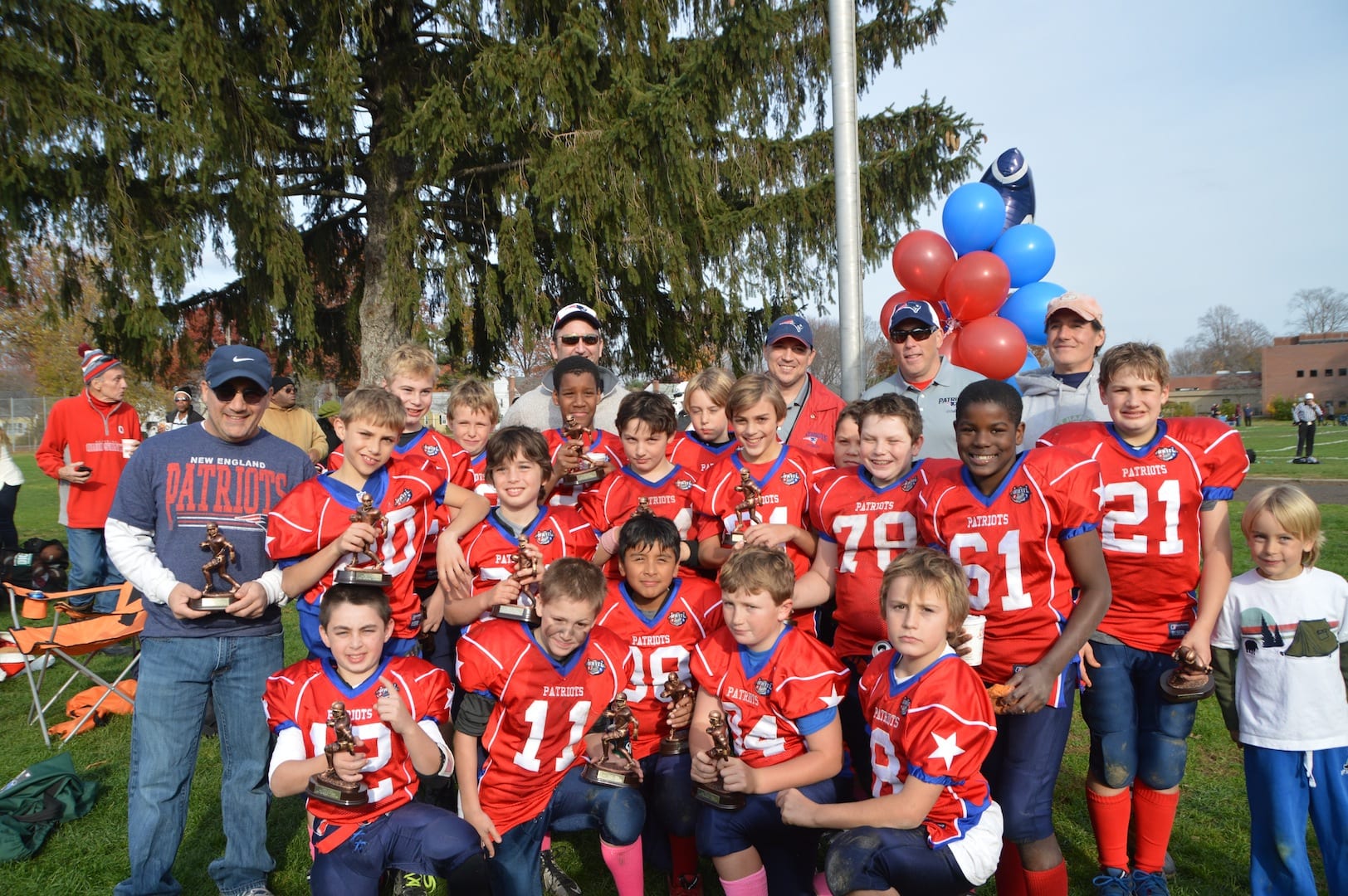 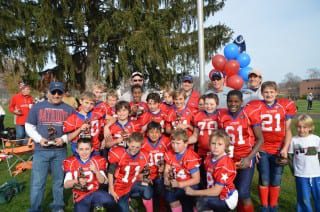 The West Hartford Eagles defeated Farmington White 42-13 to capture the Pony division championship at Sterling Field.  The win capped off an undefeated season for the Eagles as they finished 10-0.

Farmington White received the opening kickoff and methodically marched down field, biting off big chunks of yards on the ground but going to the air for a touchdown pass on 4th and 8.  The conversion run attempt was good and White had a 7-0 lead.  The Eagles Jeff LaRosa took the ensuing kickoff back 60 yards to the 10 yard line.  After several small gains, LaRosa took it in from the 2 for the TD.  His conversion pass to AJ Guevera was good and the Eagles had an 8-7 lead which they would never relinquish.

Farmington punted after their next possession and LaRosa took it back 20 yards to the Farmington 31.  After several penalties moved them back to the 39, Todd Crevedi hit LaRosa with a screen out of the back field and LaRosa took it 39 yards for the score.  The conversion pass was no good and the Eagles led 14-7.  Sean Guevera then executed a perfect onside kick that was recovered by Anthony Palace and the Eagles had the ball at the Farmington 37.  After Palace gained 12 on the ground and LaRosa 3, LaRosa hit AJ Guevera with a perfectly thrown ball to the corner of the end zone for a 22 yard TD.  The conversion attempt was no good and the Eagles were up 20-7 at the half.

The Eagles received the kickoff to start the second half and went to the ground game behind their strong line.  Palace and LaRosa gained big yards on the drive that was capped off by a 5 yard TD run from Palace.  LaRosa’s 2 point conversion pass to Guevera was good and the Eagles were now up 28-7.  On White’s next possession they were moving the ball well when the Eagles Todd Crevedi made a spectacular interception diving along the sidelines.

Rodrigo Munoz started the drive with a 17 yard gain but three straight motion penalties moved the Eagles back across midfield.  A 10 yard pass from Crevedi to Palace got the Eagles moving then Palace broke off a 43 yard run for a score.  LaRosa’s pass to Guevera was good for the conversion.  The Eagles were up 36-7.  Farmington moved the ball on their next possession with several big runs and a 30 yard pass play and hit paydirt on a short run to get to 36-13.

On their next possession, the Eagles went to Rodrigo Munoz who gained 49 yards, most coming on a strong 43 yard run up the middle.  Crevedi capped off the drive with a 5 yard TD run to put the Eagles up 42-13.  Munoz recovered the kickoff and the Eagles were able to run out the clock with several short carries by Alex Searles.

Congratulations to the Eagles players and coaches for completing an undefeated season at 10-0.

On the defensive side of the ball, the Patriots were led by outstanding play from linebacker Robert Parrotta (three sacks), Bent (sack, interception, and fumble recovery), Luke Duzan (sack and fumble recovery), Murphy, Tommy LaSpada (two sacks), Ben Brockway (fantastic stop on fourth and goal, and Wyatt Reid (several big tackles for loss on the day).

Luke Duzan recovered a fumble on B Squad Blue’s opening possession, and the Patriots opened the scoring five plays later with a 20-yard touchdown run by Brown. B Squad Blue denied the passing conversion, and the lead stood at 6-0. Following a Bent interception (his second of the season), the Patriots scored three plays later, as Bent bolted 30 yards for the score. Brown connected with Murphy on the extra point conversion for a 14-0 Patriots’ lead.

B Squad Blue turned to the ground and mounted a solid drive on their next possession before Bent and Parrotta stalled the drive and forced Blue to punt. Bent returned the punt 50 yards for the score to extend the Patriot lead to 20-0. First year halfback Ethan Tiffany converted the extra point, as he followed the blocks of Parrotta and Bent en route to the end zone and a 21-0 Patriot lead.

The Patriots forced a turnover on downs and converted one final score before the half as Bent connected with Parrotta on a 50-yard strike for a 27-0 lead. B Squad Blue denied the extra point attempt before the half.

The second half was dominated by solid defensive play on both sides of the ball. Patriots’ running backs Duzan, Swift, Murphy, and Tommy LaSpada, each saw extended playing time in the second half due do great hustle and sportsmanship during the week.

The Farmington defense rose to the challenge on the next Patriot possession to force a quick three-and-out. On the Patriots next possession, Patriot senior Luke Duzan burst 48 yards for the score to extend the Patriot lead to 33-0. Senior Joey LaSpada capped the scoring as he dove into the end zone for the extra point.

Duzan continued his family’s Patriot legacy with great defense in the fourth quarter, sacking the quarterback and jogging back to the defensive huddle only to be mobbed by his teammates in congratulations.  Brockway also made a huge defensive stop on Farmington B Squad Blue’s fourth and goal attempt late in the game, helping to secure the shutout in Patriots’ final game of the season.

Farmington B Squad Blue should be commended for putting forth their best effort in the biggest game of the season and leaving it all on the field.