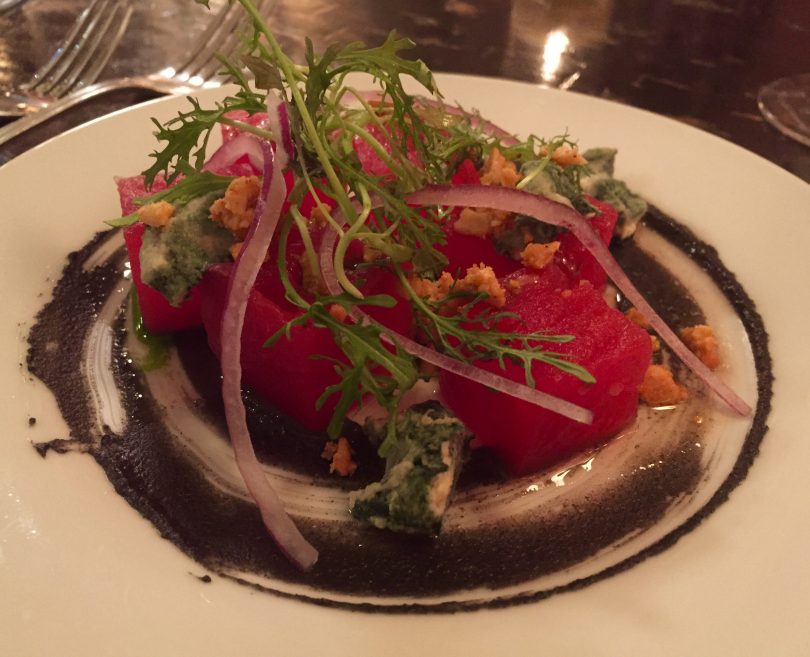 The six-course gourmet dinner fundraiser, held Monday at Grant’s Restaurant and Bar in West Hartford, was a resounding success. 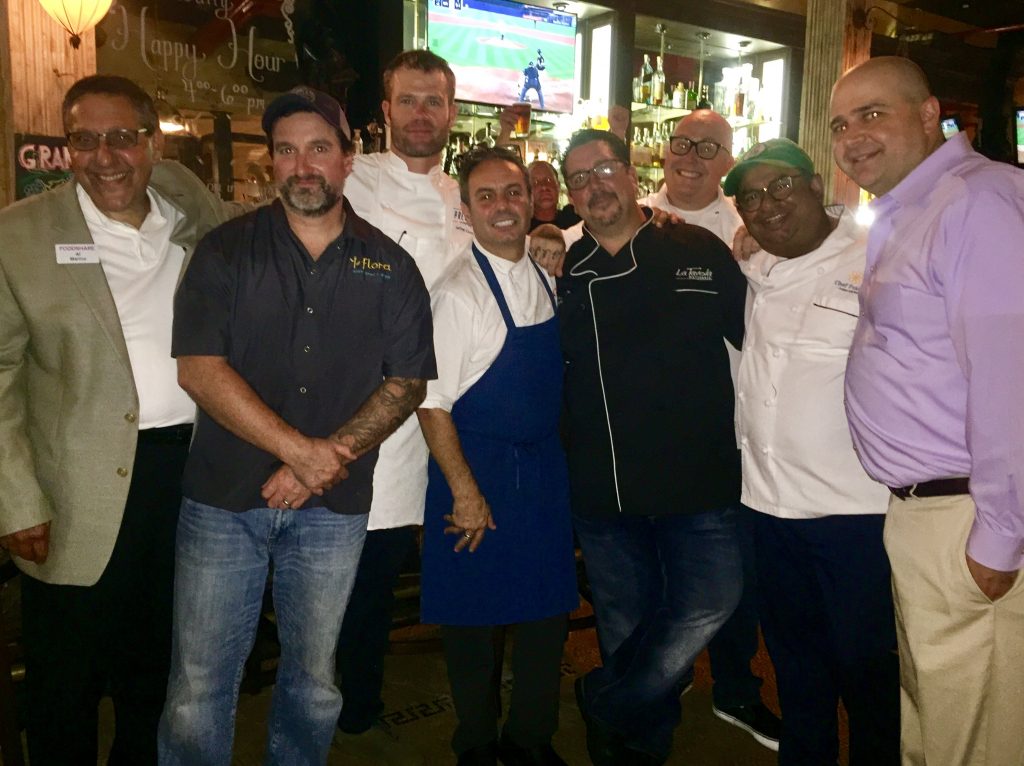 The tagline for “Eat. Drink. Give.” was “A Recipe for Ending Hunger,” and not only was all of the food delicious, but the recipe definitely turned out to be a success as a fundraiser that will have a profound impact on hunger in the area.

On Monday night, six of Connecticut’s top chefs combined forces to create a gourmet, six-course meal. Each course was paired with a complementary wine.

One-hundred percent of the proceeds were donated to Foodshare, and this first-time event was sellout – with nearly 140 people attending. Foodshare Executive Director Jason Jakubowski said that more than $12,000 was raised, and that in turn will translate into more than 30,000 meals for those in need.

Being a restaurateur and chef is in Billy Grant’s blood, as is giving back and generously supporting charitable organizations, and when asked he did not hesitate to sign on as host of the event, which was held at Grant’s Restaurant & Bar on Farmington Avenue in West Hartford Center. Grant, and five other noted chefs from the state, each prepared a course.

“All five are dear friends and do a lot for hunger. Every one of them said, ‘I’ll do it,'” Grant said at the event.

Maximum Beverage in West Hartford donated the wine pairings for each of the six courses, as well as a signature cocktail.

Each dish was unique – and exquisite.

Course two was Chirnomula’s “Konkan,” combining coconut milk and butter poached jumbo crab with mustard seed, ginger, and other spices with an airy square of Mumbai Pav in the center.

The seafood theme continued with the third course – Anderson’s “Tapioca Custard” with flavors of clam chowder. Word at the table was that Anderson has been perfecting this uniquely light, yet rich, recipe for years.

While the first course was paired with a sparkling rosé, and the second and third with a pinot grigio and sancerre respectively, things got a bit heavier with the food and wine by the fourth course.

Mancini created “Housemade Gemelli Pasta with Sugo al la Amatriciana,” a red-sauced pasta with guanciale, topped with a dollop of whipped ricotta and a delicately fried piece of prosciutto. It was paired with Dragone Toscana.

The main dish – the fifth course – was created by Grant. Braised short rib in red wine – so tender it could be eaten with a spoon – was surrounded with a “creamless” creamed corn that had just the slightest bit of a satisfying crunch. The corn was fresh-picked from Gutt Family Farm in Glastonbury. A fragrant and full-bodied Justin Isosceles was the perfect complement.

Although most of the guests had stopped counting calories early on, no one could consider skipping a course, including dessert. Lizotte’s “Peach Melba” combined lemon verbena-poached peaches with a raspberry chiboust (pastry cream) and caramelized vanilla ice cream.

“It truly was a spectacular event!” Jakubowski commented. 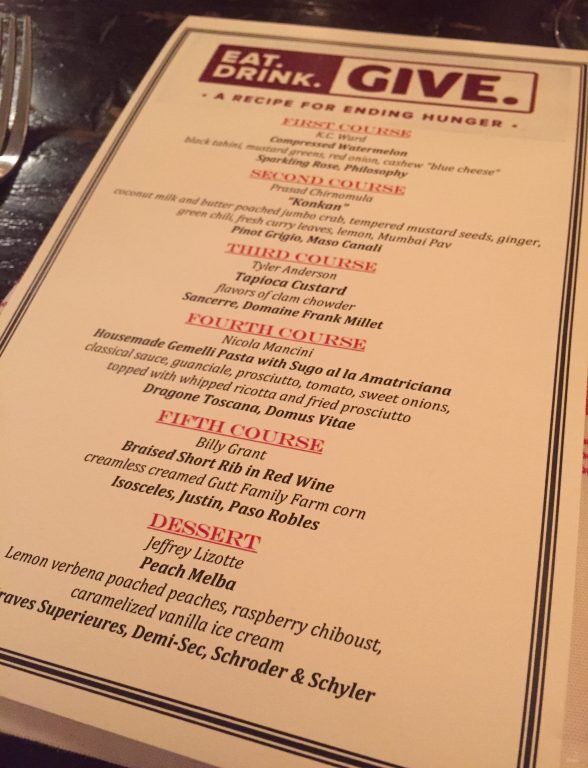 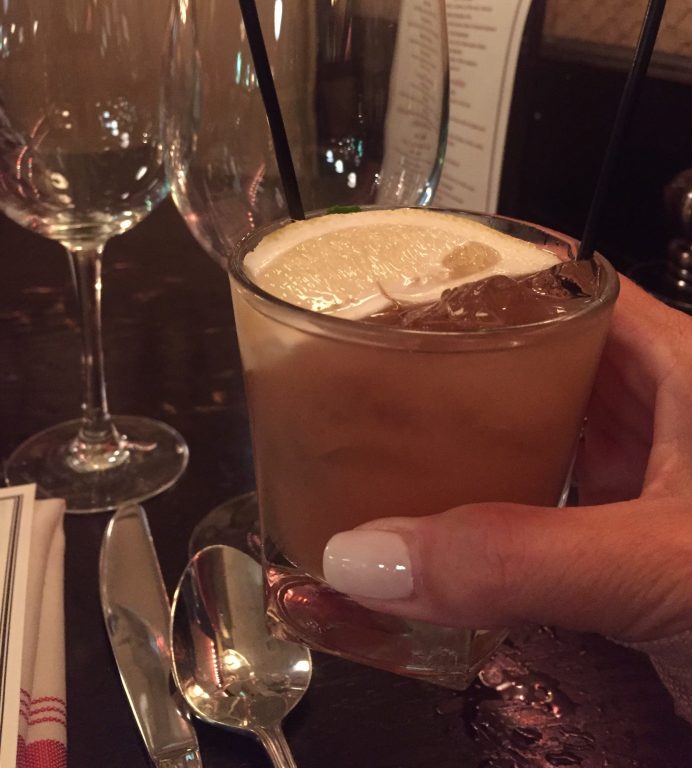 A Bourbon-based cocktail started off the evening at Eat. Drink. Give. Aug. 27, 2018. Photo credit: Ronni Newton 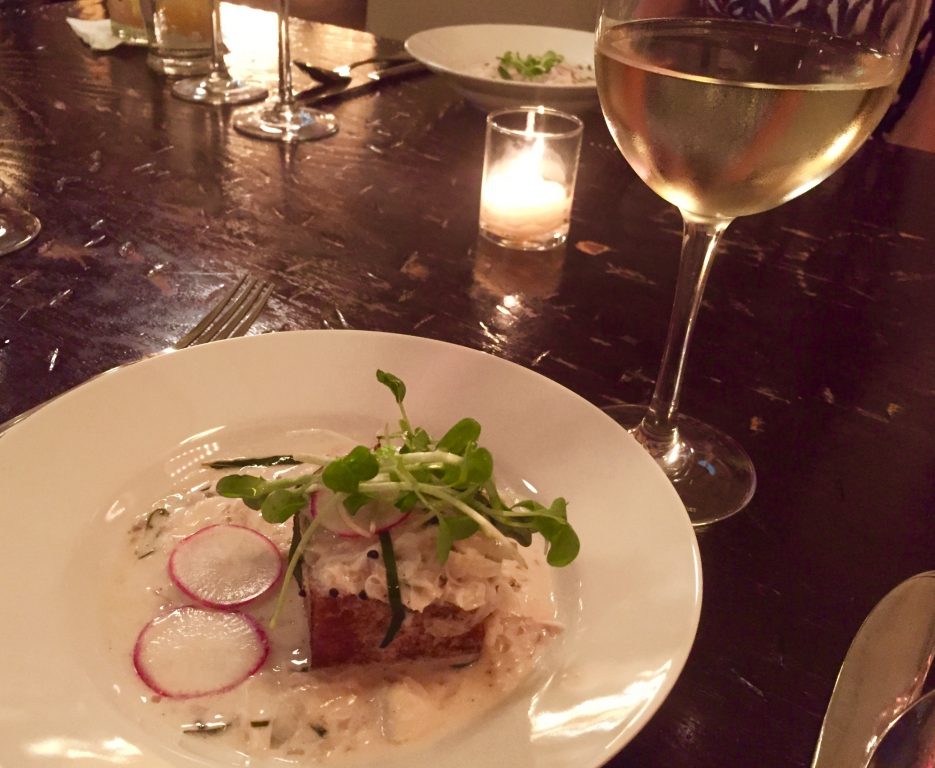 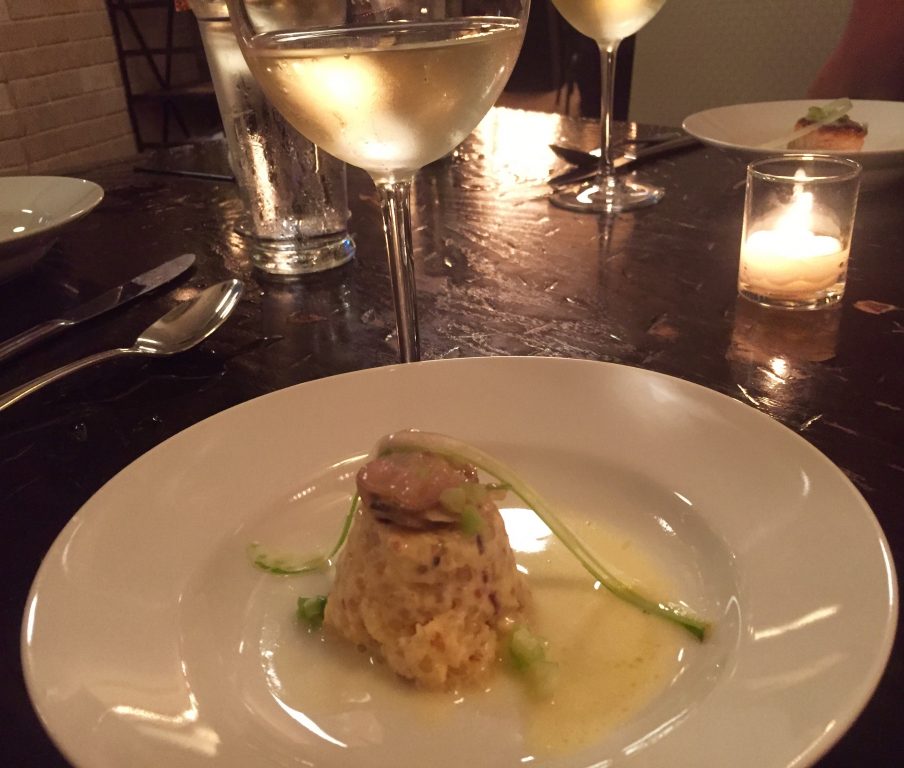 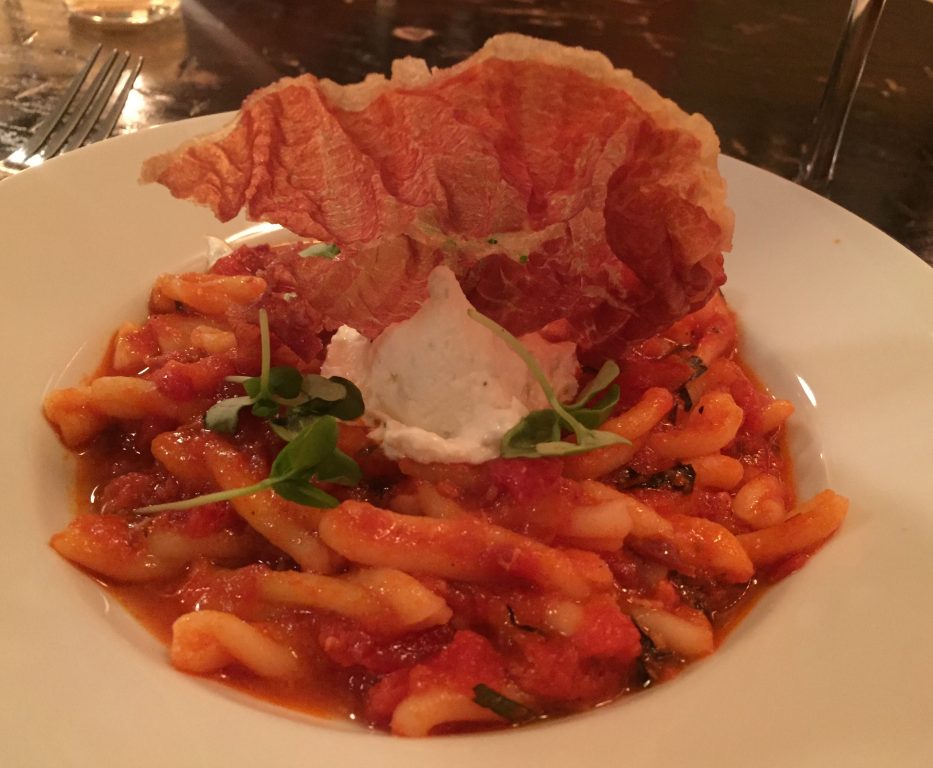 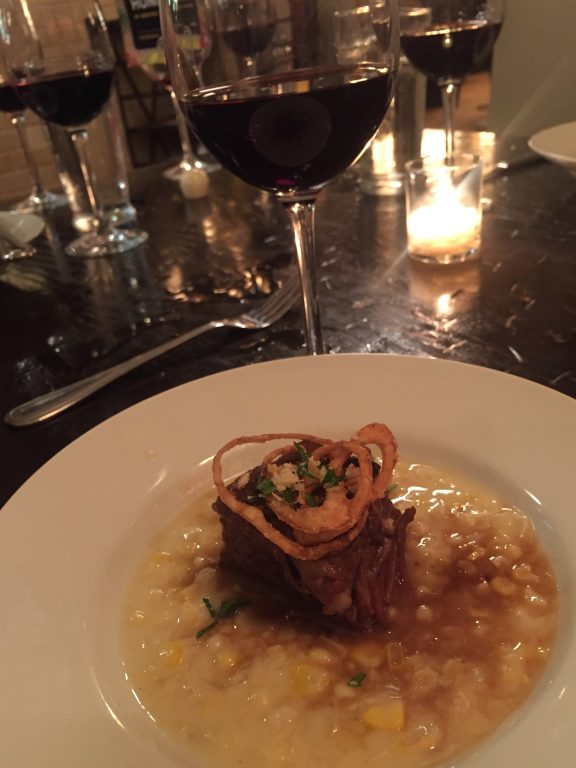 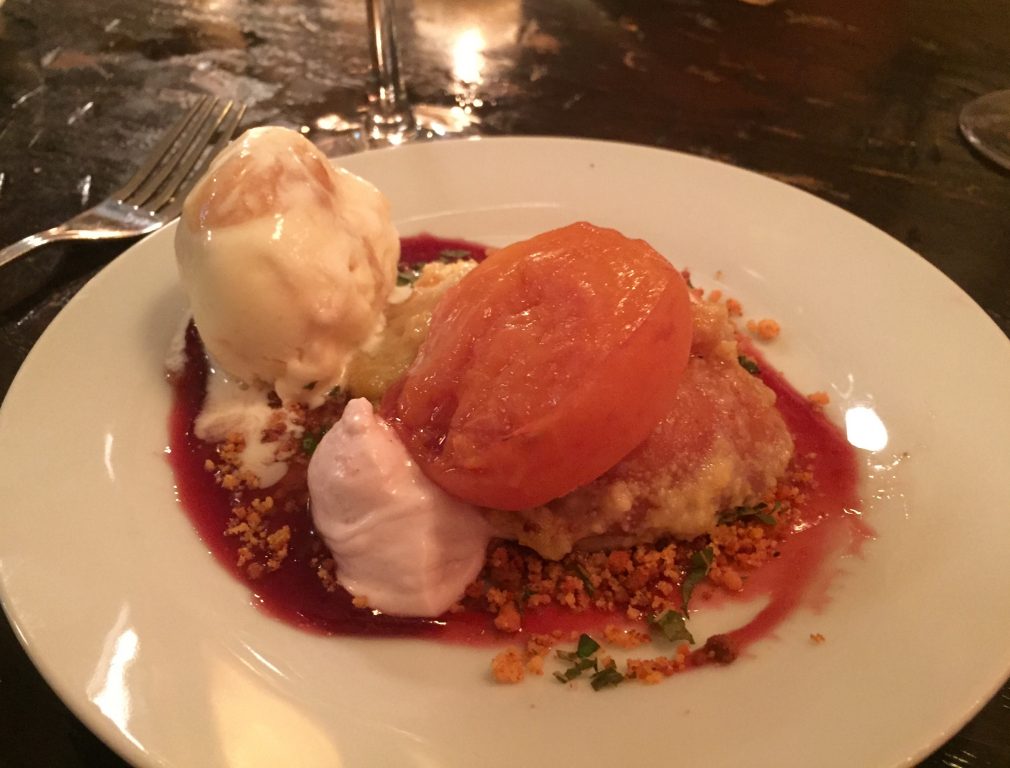