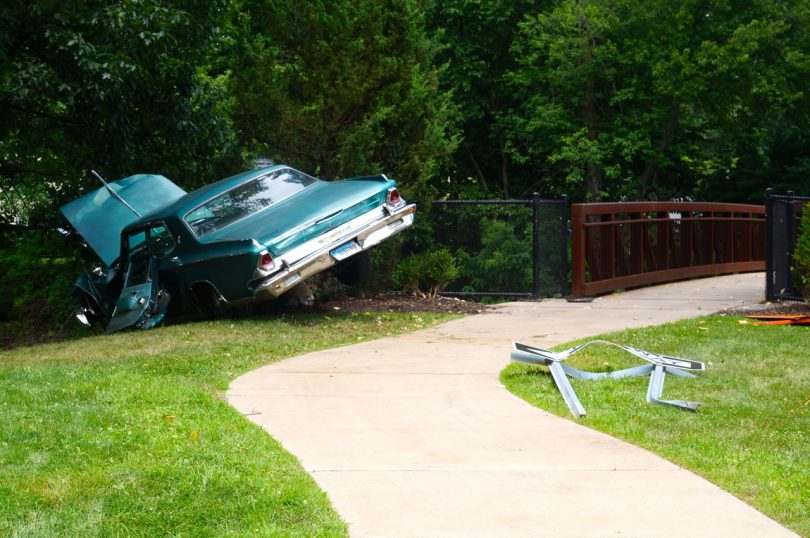 After crossing the road, jumping the curb, running over a sign and a light pole, this 1964 Chrysler New Yorker came to rest just at the edge of the Trout Brook embankment. Photo credit: Ronni Newton

Connecticut State Police have released their report on an incident that occurred on July 20, one that began when the driver of a 1964 Chrysler New Yorker lost her brakes while exiting I-84 at exit 43 in West Hartford.

According to State Police, at the time of the incident the driver of a 2012 Honda Civic had come to a stop in the right turning lane at the light at the end of the exit ramp, waiting to turn east onto Park Road.

Police said that Renee Dubin, 88, of West Hartford, was driving the New Yorker, which was owned by her daughter, and she was coming up behind the Honda Civic on the ramp when she realized that the vehicle had suffered full brake failure.

According to police, Dubin took evasive action to avoid striking the Civic, by going into the grass shoulder. She hit several D.O.T. signs before sideswiping the Civic, “then continued through the Park Road intersection out of control without hitting any vehicles and continued until striking a tree and light pole,” the police report states.

Police said that while Dubin was found to be responsible for the crash, their report stated “without [Dubin] taking evasive action by leaving the roadway to avoid striking several vehicles and successfully negotiating the Park Road intersection, this accident would have been more serious in nature and serious injuries would have been sustained.”

The driver of the Civic was not injured. Dubin was transported to St. Francis Hospital by AMR ambulance with what police said were non-life-threatening injuries.

Police and fire officials say that brake failure appears to be the cause of a crash Thursday afternoon which sent an 88-year-old driver of a 1964 Chrysler New Yorker to the hospital with what were described as minor injuries.

West Hartford Police Capt. Jeff Rose said that Renee Dubin, 88, of West Hartford, was exiting I-84 at exit 43 (Park Road) when she told police that her brakes appeared to have failed.

Rose said that Dubin struck two vehicles, including a Honda Civic, that were stopped at the light waiting to turn onto Park Road, and then careened across Park Road, jumped the curb, crossed the sidewalk on the north side of Park Road just to the west of the footbridge over Trout Brook, and hit a light pole before coming to rest at the embankment heading down to the brook.

The light pole, which was completely destroyed by the crash, appeared to have stopped the car.

West Hartford Fire Department Capt. John Brice said before officials could remove the driver’s side door to extricate the driver, the car had to be stabilized because it was precariously perched and could have fallen further down the embankment.

Dubin was transported to an area hospital with what were described as “luckily only minor injuries.” She did not have any passengers in her vehicle.

No one else was injured in the crash, which occurred in the middle of the day at a very busy intersection.

The Chrysler New Yorker as well as the Honda Civic, were towed from the scene.

State Police are handling the investigation because the crash originated on the I-84 exit ramp. 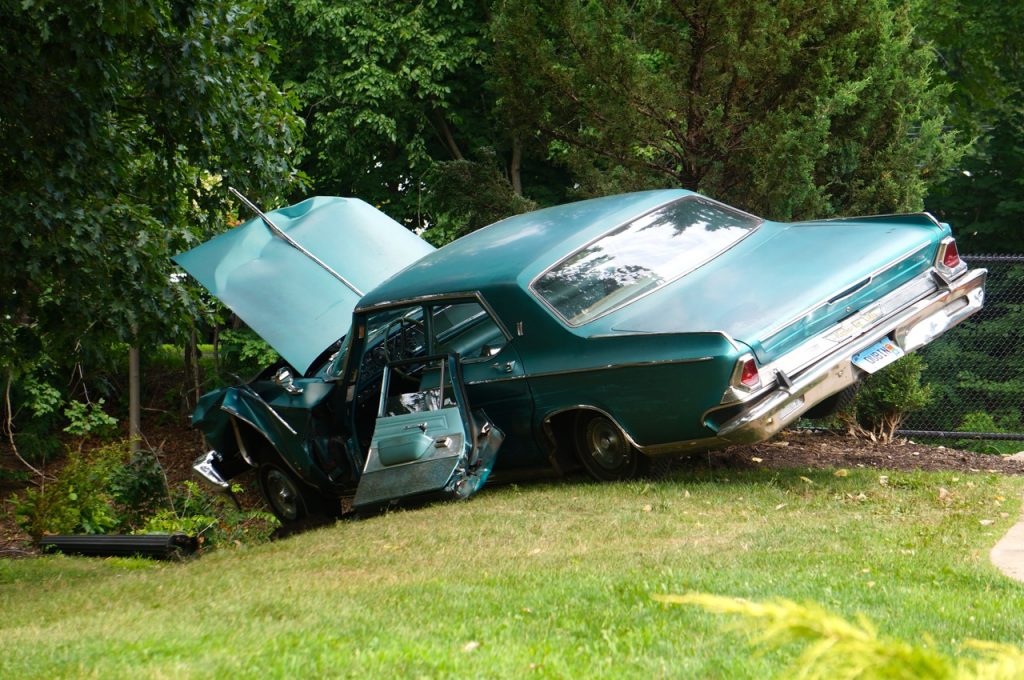 A 1964 Chrysler New Yorker came to rest just at the edge of the Trout Brook embankment. Photo credit: Ronni Newton 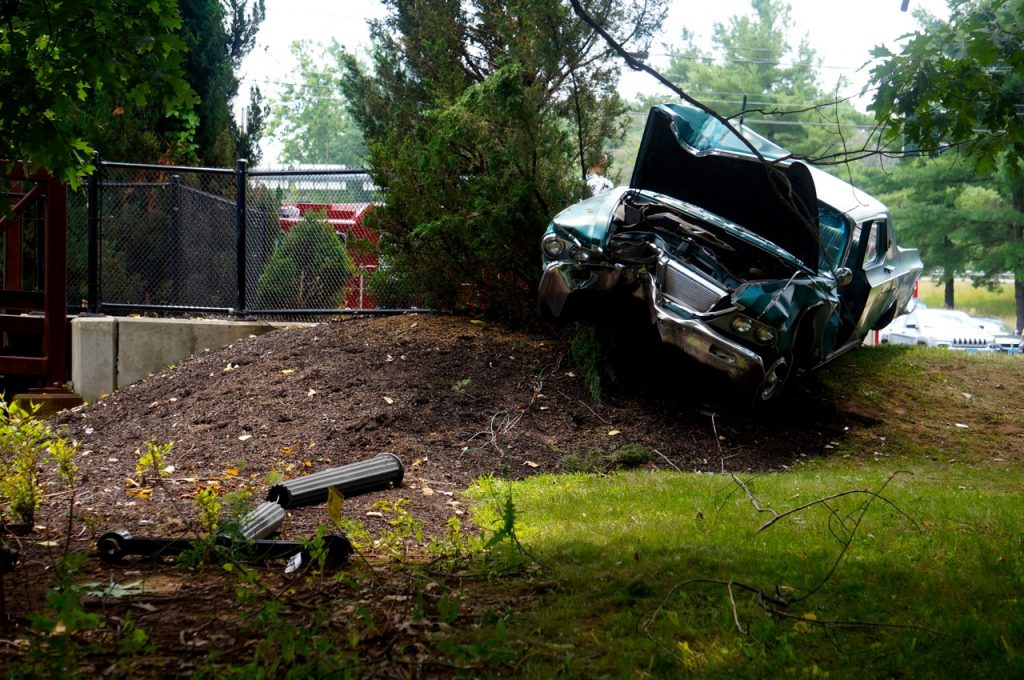 The 1964 Chrysler New Yorker crossed park Road, hit a sign and a light pole, before it came to rest just at the edge of the Trout Brook embankment. Photo credit: Ronni Newton

A 1964 Chrysler New Yorker came to rest just at the edge of the Trout Brook embankment. Photo credit: Ronni Newton 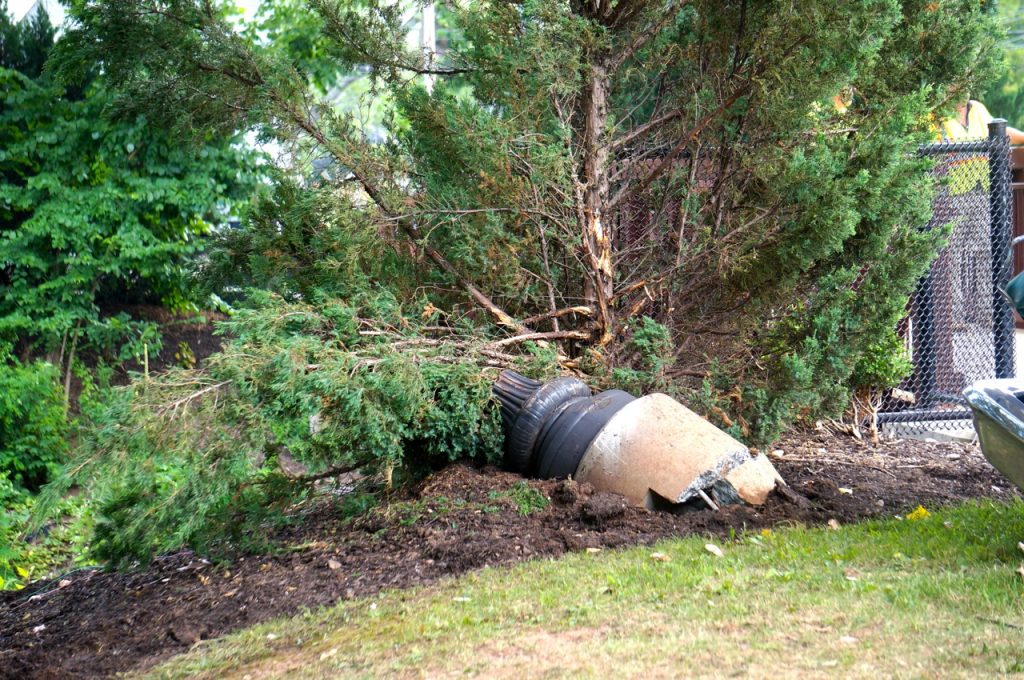 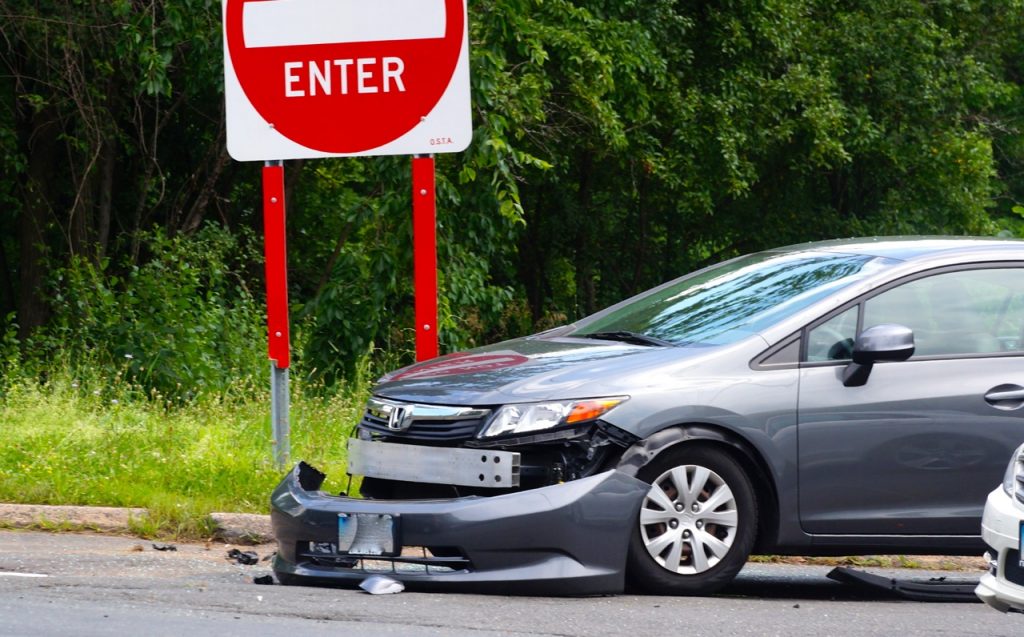