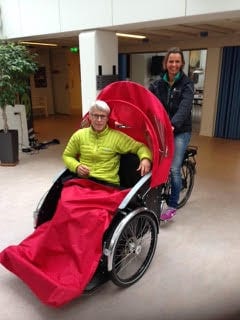 Lene Bruun training as a Cycling Without Age pilot in Denmark. Courtesy photo

Lene Bruun, a native of Denmark who moved to West Hartford in 2014, hopes to give West Hartford’s elderly residents ‘the right to have wind in their hair.’

Lene Bruun training as a Cycling Without Age pilot in Denmark. Courtesy photo

West Hartford resident Lene Bruun believes that “Cycling Without Age” is a win-win program, one that provides great benefit to the elderly who get to experience the outdoors and feel the wind in their hair as well as to the volunteer rickshaw pilots who have a chance to make new friends and hear stories that might otherwise be forgotten.

Bruun, a native of Denmark who moved to West Hartford in August 2014, has a background in physical therapy and health science and is working to bring Cycling Without Age to West Hartford as one of the organization’s first programs in the United States.

Cycling Without Age was founded by Ole Kassow in Denmark in 2012. Kassow didn’t start off with the intent of founding an international non-profit organization. As he explains in his TEDx Talk, Kasssow’s plan started with a 97-year-old man, the idea that the elderly might miss cycling, and a rented rickshaw.

There are now approximately 300 rickshaws being operated by 1,500 pilots in Denmark alone, and the program is rapidly spreading throughout Europe. There are also programs in place or planned for South America, Australia, New Zealand, and Singapore, as well as in the United States.

“The elderly absolutely love it. They get to come out of their nursing homes, and be part of society,” said Bruun, who trained and was certified by Kassow in Denmark last month. 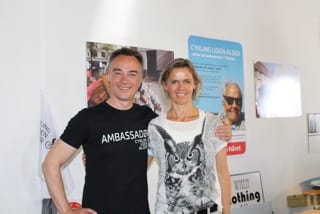 Bruun recently presented her idea to Olivia Astle, director of Therapeutic Recreation at Hughes Health & Rehabilitation in West Hartford. “She said, ‘What’s not to like about it?'” Bruun said. Bruun learned that some of the residents rarely get to leave the premises other than when volunteers push them around the block in their wheelchairs.

“I think it’s an amazing opportunity to get the residents outside. It’s something different,” Astle said. She’s already gotten approval from her management, and is hoping the program gets going soon.

“The elderly are capable of much more than we think. We tend to limit them,” said Bruun who told a story of a woman in her 90s who spent weeks convincing her daughter to let her go on a ride. “She had a great time, and all the barriers disappear. It’s empowering to all,” Bruun said.

The three-wheeled rickshaw is kind of like a pedi-cab, but with the passengers riding in front of the driver. The benefit is that it’s easier for the passengers to hear the pilot, and it also gives them the best firsthand impression of the ride. “They get to feel the wind in their hair,” Bruun said. 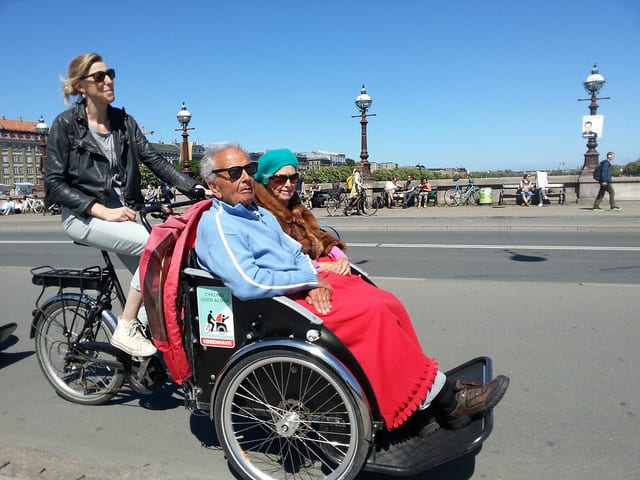 An elderly couple in Denmark enjoys a ride in a specialized rickshaw. Courtesy photo

A rickshaw has the capacity for two to ride in front, and most of the elderly passengers bring either a friend, relative, or staff member with them for the ride, to increase their sense of security, Bruun said.

She said it’s not difficult to pilot, and the rickshaws are equipped with electric assist power motors to help with uphill climbs.

There was recently a three-day 300K Cycling Without Age event which went from Denmark to Hamburg, Germany and involved 10 rickshaws, 20 elderly passengers between 70 and 90 years of age and 15 pilots. A tourbus accompanied the rickshaws, but many of the elderly happily spent most of the time on the rickshaws, leaving their walkers unused on the bus.

“My aim is not to do long rides, but to give residents of nursing homes the experiences of parks, the reservoir, coffee shops, and to give them a chance to tell their stories,” Bruun said. Elizabeth Park is a great and convenient destination which can be reached without dealing with much traffic she said.

“Bicyclists are looked at as people in spandex,” said Bike West Hartford’s Scott Franklin. However, the organization is looking to greatly expand that view and has already gotten involved in programs like iCanBike which supports children with special needs.

“We also wanted to do something with the elderly, and [Bruun] is going to make it happen. It will help those that can’t go out and bike themselves,” Franklin said.

Bruun will be promoting Cycling Without Age during Saturday’s “Discover West Hartford” Bike Tour, and will be giving sample rides on borrowed pedi-cabs on Burr Street during Celebrate West Hartford on Saturday as well. She’s hoping to attract future pilots as well as donors.

Bruun said that she’s not aware of any of the elderly experiencing a medical problem while out for a ride in Denmark and said that common sense is used when deciding who is fit enough to get out for a ride, but she is well aware that the United States is more concerned with liability issues. Part of her anticipated costs are for insurance.

Bruun is looking to initially raise $17,500 to purchase two rickshaws ($4,500-$5,000 each) and pay for the insurance. She has already secured enough for one rickshaw, thanks to donations from West Hartford residents Jesse and Amy Eisler as well as active cyclists and residents Rick and MaryEllen Thibodeau, and a joint effort with the global fundraising campaign launched by the Danish mother organization. It’s due to arrive late this summer, but she’d like to get a second rickshaw at the same time, and then raise enough money for two more plus insurance in 2016.

REI has already signed on as a sponsor, and will assemble and maintain the rickshaw, Bruun said.

Those interested in donating can visit the global fundraising campaign page by clicking here. Bruun appears in the video, at the 3:08 mark.

“I think the cause is strong. It’s a good story. It’s about giving more quality of life to people in nursing homes,” said Bruun.