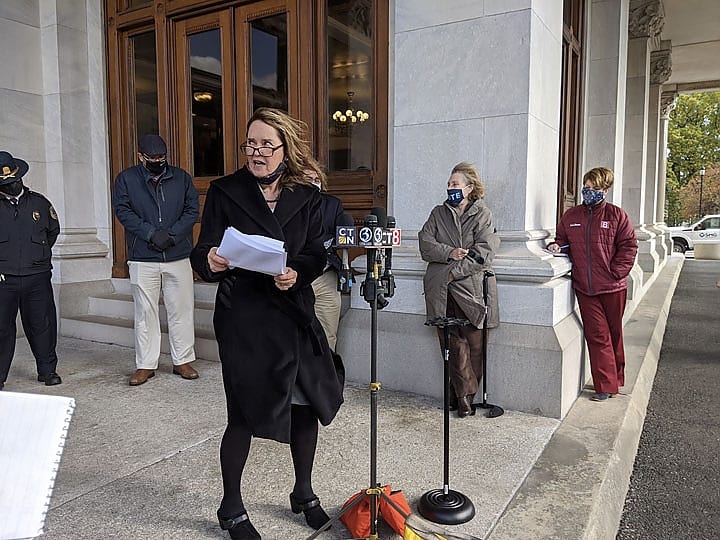 As of Monday morning, West Hartford Town Clerk Essie Labrot said that 90% of all absentee ballots sent out had been returned.

On the eve of what is sure to be one of the most unusual elections in recent history, Connecticut officials shouted over heavy winds Monday to reassure voters the state was prepared for Election Day 2020.

Voting officials and Attorney General William Tong gathered reporters on the South side of the State Capitol Building on a blustery afternoon to prepare voters to head to the polls for an Election Day sure to be marked by an unusually contentious presidential election, masks, and lines, artificially extended by social distancing. 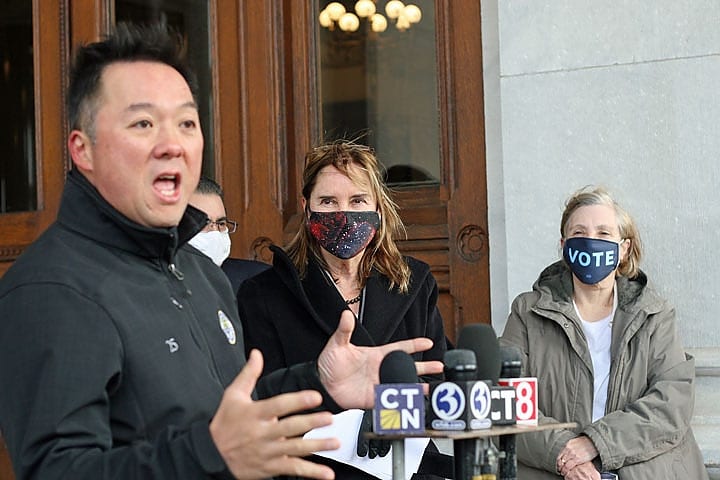 “I know there’s a lot of wind but that’s God telling us how great this is. The message across the state tomorrow is vote,” Tong said. “Vote confidently … It is going to be fair, open, transparent and accurate. Sure, stuff’s going to happen. We’re ready for that. But tomorrow’s going to be a great day for our state.”

Secretary of the State Denise Merrill said election officials have been preparing for Tuesday since February.

“We wanted to make sure that every registered voter could safely cast their ballot even during a pandemic,” she said.

For many, voting will look and feel different this year. As of Sunday, just over 595,000 Connecticut residents had already cast absentee ballots, a record number permitted by a pandemic-related executive order from the governor. That means, even before Election Day, more than 25% of the state’s 2.3 million registered voters have already voted.

In West Hartford, Town Clerk Essie Labrot said Monday morning there had been 17,653 ballots returned – a 90% return – and that was prior to the day’s mail delivery. Roughly 1,000 additional ballots were received at Town Hall by the end of the day.

It’s likely that more than half of all those who are planning to vote in West Hartford have already done so passed on prior turnout, Labrot said, and she does not anticipate long lines at he polling places on Tuesday.

The process will feel different for people heading to the polls in person. In many towns, plexiglass will separate voters from the poll workers checking them in; privacy booths will be spaced further apart than normal, and lines may appear longer even if there are actually fewer voters waiting in them.

“Everyone is going to have that six foot distancing so the lines are going to look extremely long even though they may not be as long as they seem. Be patient when you get in line. It will move and we will get you in as soon as possible,” said Sue Larsen, a South Windsor registrar of voters and president of the Registrars of Voters Association of Connecticut.

Voters heading to the polls will be asked to wear masks while casting ballots. Anyone without a mask will be offered one by poll workers. For residents who refuse to wear a mask, election officials have drafted a few contingency plans to allow that person to vote without potentially exposing them and others to the coronavirus.

Polling locations with adequate space may be set up to allow maskless voters to cast ballots in a segregated area, away from other voters. In some cases, voters may be asked to return to their vehicles, where they will be brought a ballot. A poll worker will then collect the ballot, bring it inside using a privacy folder and deposit it in the tabulator for the voter. Asked whether those voters could demand to personally see the ballot inserted into the machine, Tong said ‘no.’ He said election workers were already working “to bend over backwards to make sure that their franchise and their constitutional right is honored.”

“These are your neighbors and your friends,” Larsen added. “You want to protect them as well as yourself.”

Merrill said she expects strong participation in this year’s election with turnout as high as 80% of registered voters. Unofficial results are expected on election night, but Larsen said larger municipalities may be counting ballots beyond Tuesday.

“The small towns may be able to finish on election night. The medium to large towns and cities are probably going to do some of the counting on wednesday to ensure that every absentee ballot is counted,” she said.