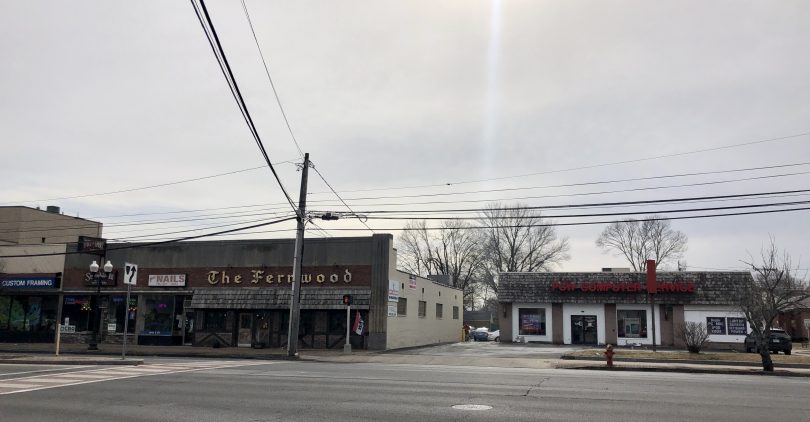 Property at 1105-1115 New Britain Avenue, and extending onto Grove Street and Newington Road, has been designated as a Special Development District. Photo credit: Ronni Newton

The West Hartford Town Council approved a new Special Development District and zoning changes for a parcel in Elmwood that will allow for expansion of the parking area through the demolition of a residence and an addition to the existing New Britain Avenue building. 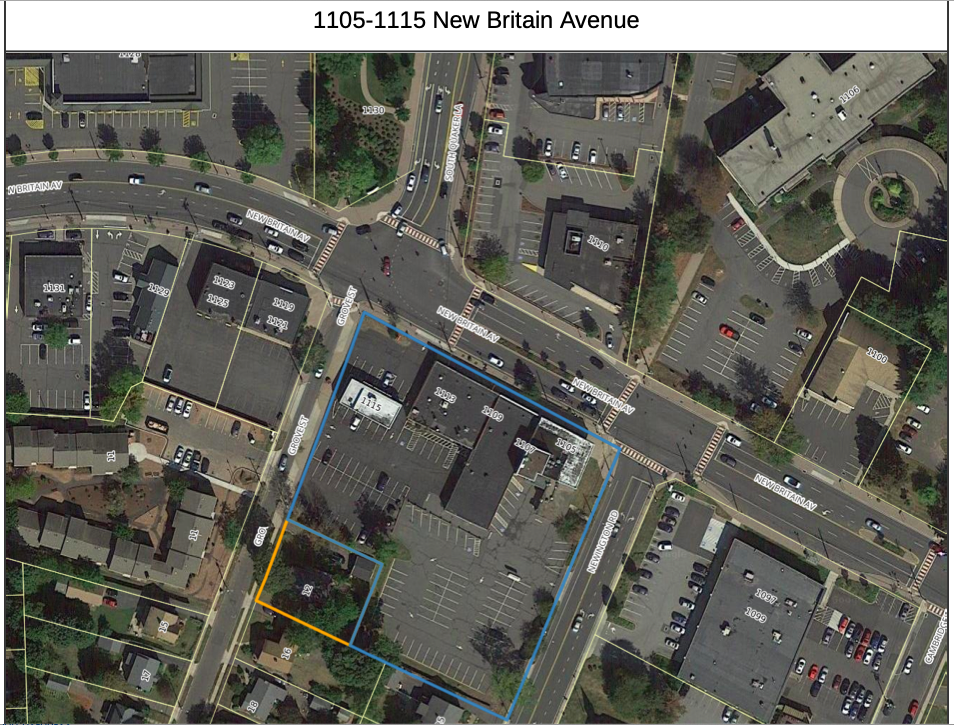 The parking lot behind Jerry’s Artarama will be getting a complete makeover as part of a plan approved by the West Hartford Town Council last week that will create a new Special Development District, change the underlying zone for 12 Grove Street where an existing single-family residence will be demolished, and permit a 6,000 foot structure to be built adjacent to the Fernwood Restaurant, eliminating an alleyway and replacing the building currently occupied by PCW Computer Service.

The property, including the residence, built in 1872, that is located at 12 Grove Street, is already entirely owned by JJJ New Britain Avenue Associates, LLC, which made the application to the town. The principal is Jeff Shoham, who has been the owner of Jerry’s Artarama since its inception in 1993. Jerry’s Artarama is now managed by Shoham’s son, AJ Shoham. 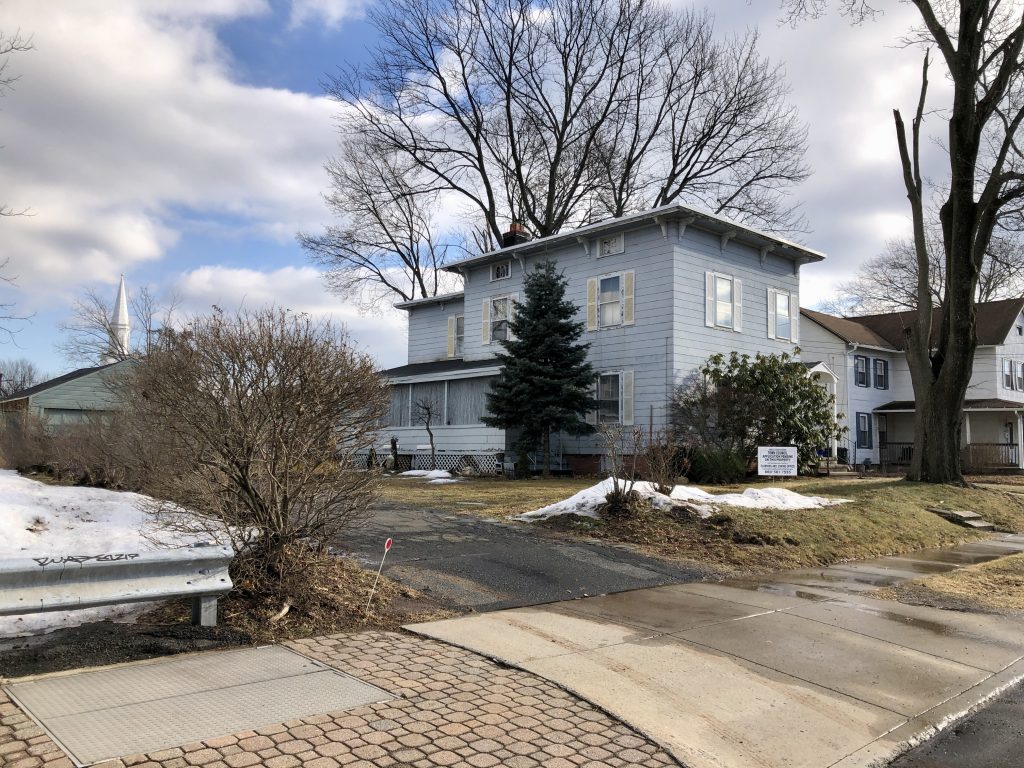 A single-family home at 12 Grove St., built in 1872, will be demolished and the 0.22-acre property will become part of the parking lot. Photo credit: Ronni Newton

This is the second time an application has been made for changes to this property, Attorney Robin Pearson, representing JJJ New Britain Avenue Associates, said at the public hearing which preceded the Council’s vote on Feb. 8. In February 2020, Shoham sought approval to rezone 12 Grove Street and incorporate that property into the parking area, but the application was withdrawn before bring brought to a vote due to “a great deal of neighborhood opposition,” she said. At the time, most of the opposition was due to the projected traffic impact on Grove Street.

“They were good points. Mr. Shoham withdrew the application,” Pearson said. The plan was reconsidered, she said, and “two years later we are there and believe we have got something which is a very positive change for this area of town.”

The existing parking area behind 1105-1115 New Britain Avenue is “disorganized” and “inefficient,” Pearson said. It’s split into two sections, and while pedestrians can walk from one portion to the other, fencing keeps vehicles that enter on Grove Street – which on that block is a one-way street headed southbound only–  from exiting the parking area onto Newington Road. Cars can currently enter that portion of the parking area from New Britain Avenue as well, through a narrow alleyway between the Fernwood Restaurant and PCW Computer Services. The other section of the parking lot is accessible from Newington Road only. 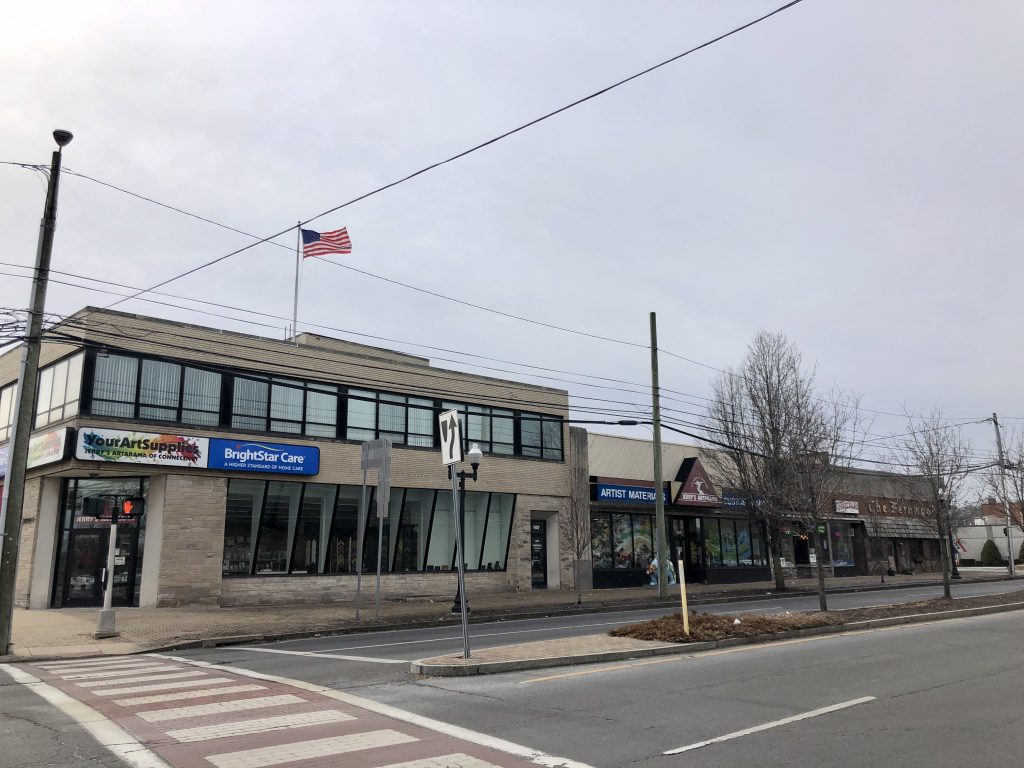 Property at 1105-1115 New Britain Avenue, and extending onto Grove Street and Newington Road, has been designated as a Special Development District. Photo credit: Ronni Newton

The new plan will create one parking area, and access from Grove Street will be an entrance only. An entrance will also be located on Newington Road, and motorists will only be able to exit onto Newington Road.

The parking area will be significantly upgraded, with new lighting, landscaping, and screening of the dumpster area as well as creation of a buffer for the area separating the parking from the residential properties to the south. Maple trees, flowering pear trees, birch trees, and evergreens, as well as rain gardens along Grove Street, will be part of the landscaping plan. 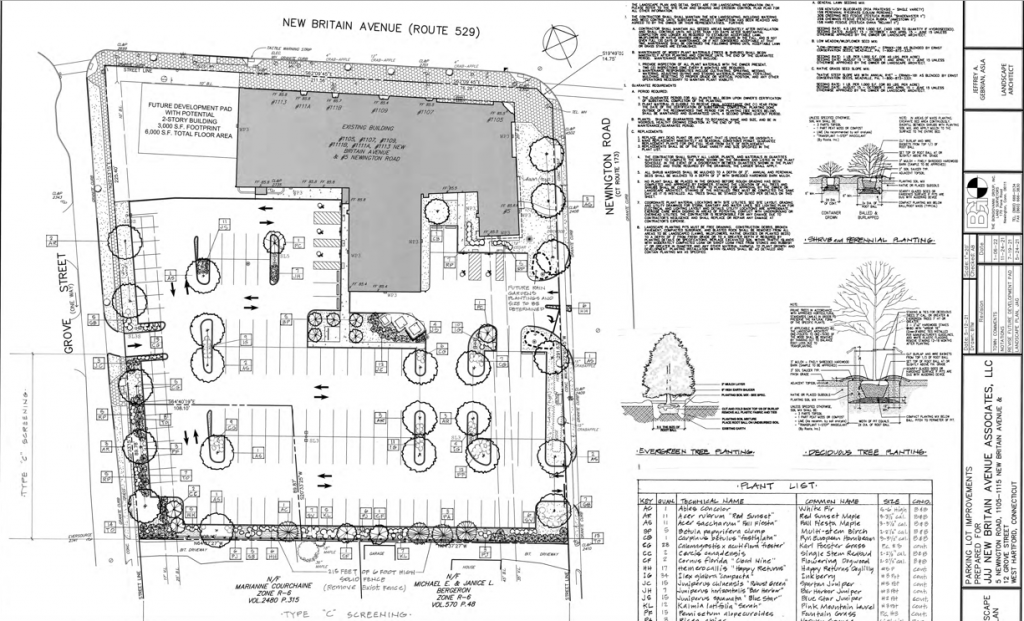 The approved plan also contemplates replacement of the current 1,582 square foot building where PCW is located with a new 6,000 square foot, two-story structure that would be adjacent to the Fernwood and would eliminate the alleyway, and would also be brought forward to the sidewalk – a more pedestrian-friendly design in compliance with the town’s Traditional Neighborhood Design (TND) zoning overlay that applies to the area. The existing building, built in 1940 and grandfathered, is set back from the roadway with parking in front.

Once 12 Grove Street is turned into parking, the entire parcel will be squared off, and the additional parking spaces will be needed and will be sufficient to accommodate the current occupancies as well as whatever business leases the expansion area.

Grove Street resident Michelle Parsons said she bought property that was the seventh house from New Britain Avenue, and now it will be the sixth. “I see a slippery slope occurring,” she said, also expressing concern that a different developer might seek to expand the commercial building on the site.

“I support this moving forward,” Sweeney said in his comments before the vote. He expressed his appreciation to Shoham for working with the Council to come up with the current plan.  “We know that they are good tenants and will continue to improve what is an exciting development along New Britain Avenue.”

“I believe that the applicants have proposed something that will improve the space,” said Wenograd, and complies with the town’s Plan of Conservation and Development and goals for Elmwood.

Fay, who voted against it, said she had concerns “that we will be demolishing a single family home for a parking lot,” and questioned whether the total number of parking spaces planned were needed.

She said she supported the plantings and upgrades to the parking lot, but would “like to see that happen anyway.” 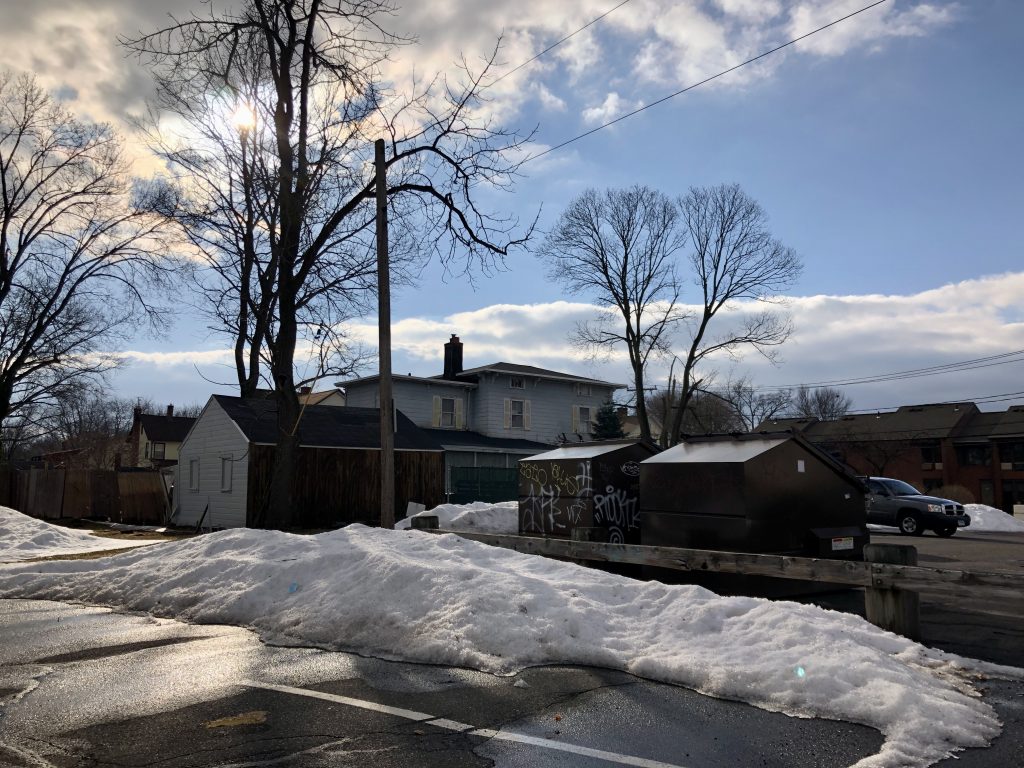 The existing parking lot behind 1105-1115 New Britain Avenue is separated into two unconnected areas, and the dumpsters in the middle do not currently have any screening. Photo credit: Ronni Newton

Davidoff said that New Britain Avenue and New Park Avenue, where multiple new projects are in various stages of consideration or construction, has become the “golden corridor of our town.”

He said he doesn’t think there will be any problem attracting a tenant to the expansion space – which had been raised as a concern – and noted that since the property will be a Special Development District, the Council will have the opportunity to review those plans in advance.

“They basically have agreed to do all these site improvements,” said Davidoff, who said he appreciates the applicant working to create a workable proposal and expressed his hope that other Council members would approve the project unanimously in support of a strong commitment to Elmwood and the business community.

Cortes, who cast the other vote against the plan, said while he is very passionate about Elmwood he was struggling with this. “I’m struggling with knocking down a 140-year-old home when we are having a housing crisis” to create 13 parking spaces. “I’m very torn because it looks great, looks great on paper,” he said, but he feared it would be something to be regretted in a year or two.

“Elmwood is my community and right now we are all buzzing with excitement,” said Blanks, who is an Elmwood resident. She said this project, and other planned improvements in the area, are transformational.

“I just see it as a win-win especially with all the other things coming up,” said Blanks. She added that she empathized with the neighbors who opposed the project, but also knows there are many others who are welcoming this change.

“I always appreciate that West Hartford is so forward thinking,” noted Casperson.

“I know you value history … and it’s never easy to take down a home but sometimes a home sits in an area that’s a difficult space,” Cantor said. Squaring off the parking area, and making a straight line delineating the commercial and residential areas, makes sense for the property, she said.

“These are substantial improvements, this is not minor parking lot improvement. These are transformational,” said Cantor. “I do believe and hope this will be a fabulous addition to the neighborhood.”

The approval of the plan included an added condition, to which the applicant consented, that the parking lot upgrades must be made as a condition of occupancy for the permitted addition.