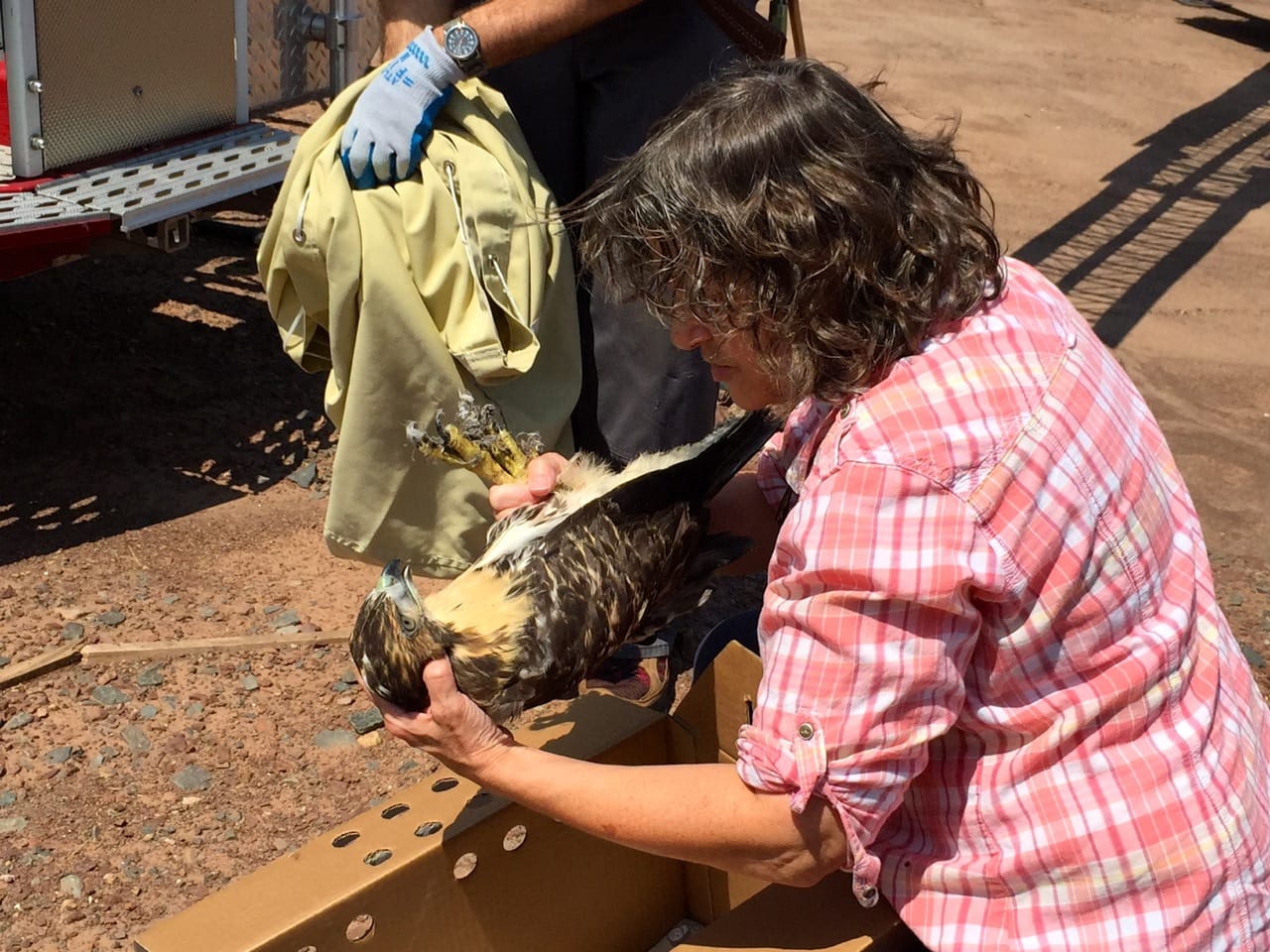 Mary-Beth Kaeser of Horizon Wings takes the young red-tailed hawk from Brian Hess of DEEP and prepares to drive it to Tufts Wildlife Clinic for treatment. Photo credit: Ronni Newton

‘Baby Delamar’ suddenly appeared to be very ill and the group that has been watching the hawk’s progress initiated a rescue Friday afternoon by the DEEP with the aid of the West Hartford Fire Department. 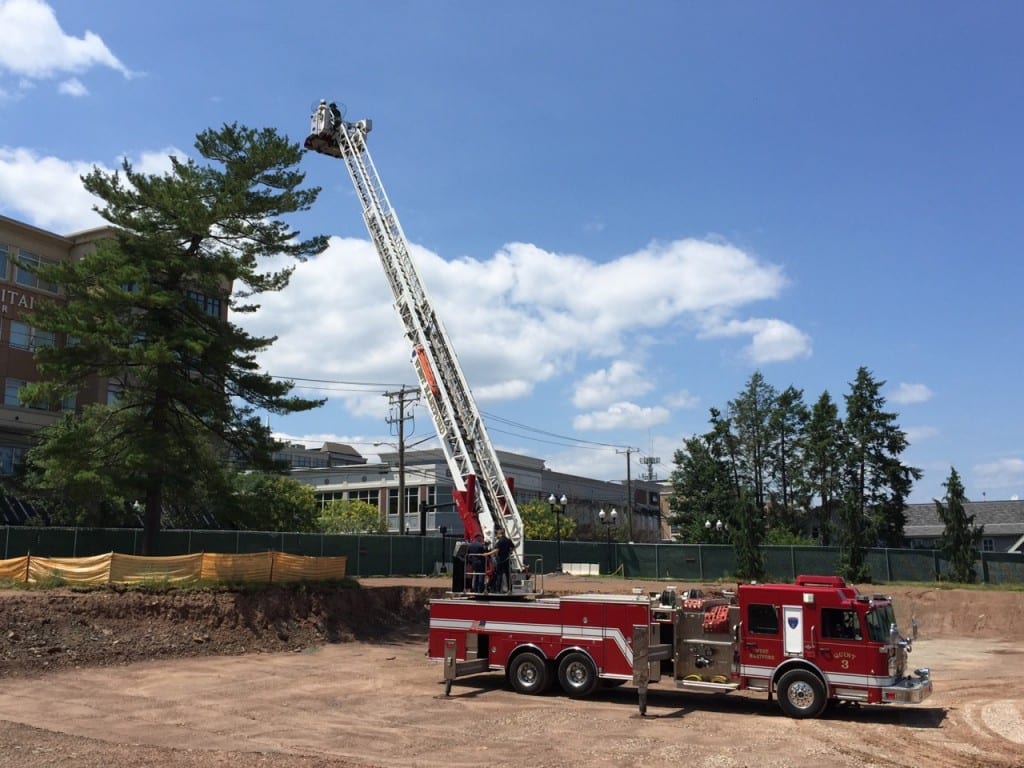 Mary-Beth Kaeser, owner and founder of Horizon Wings Rehabilitation and Education, has been in touch with the doctors at Tufts Wildlife Clinic who are treating the young red-tailed hawk, who has been dubbed “Delamar,” rescued Friday from a tree on the Delamar West Hartford Hotel construction site.

After two nights in the care of the clinic, Kaeser sent out the following report with some optimistic news on Sunday: “Delamar is still with us! He’s not eating on his own so they are force-feeding him he is anemic but his blood is clotting.”

We will continue to provide updates as they are received. A YouTube video created by Mike Berzenski, which shows the rescue of the hawk, has also been attached to this article.

The young red-tailed hawk that seemed just about ready to fledge from its nest atop the lone pine tree remaining on the Delamar West Hartford Hotel construction site seemed to have suddenly taken ill – with poisoning the suspected cause – and those who have been watching the progress of the bird ever since the nest was discovered quickly put into a place a plan for its rescue and emergency treatment.

A video taken of the baby hawk by Mike Berzenski on July 7 showed the bird active and alert, flapping its wings, hopping from branch to branch, and appearing ready to take its first flight. (Click on the following links to see those videos on YouTube: https://youtu.be/4iQVkTC8tSg and https://youtu.be/3j7PF21gKcg)

On Thursday evening, Mona Cavallero, a West Hartford resident and member of the Hartford Audubon Society who along with Berzenski has been taking the lead in following the bird’s progress, sent out an alarming email to a group of hawk experts and other interested parties who have also been tracking the hawk’s situation.

Cavallero said that over the past two days, the young hawk Delamar’s behavior and appearance had totally altered. “He is very sluggish, staying close to or in the nest/ eyes closed, no interest in food, and lack of any signs of wing flapping or fledging behavior or hopping on branches as was displayed previously,” she wrote in the email.

Cavallero and Berzenski expressed concern that the hawk had become ill, possibly due to rodenticide poisoning since the last food that it had been seen eating was a rat delivered by its mom.

Mary-Beth Kaeser, owner and founder of Horizon Wings Raptor Rehabilitation and Education in Ashford, CT, was able to assist the group in quickly putting together a plan to bring the bird to the Tufts Wildlife Clinic – a facility in Grafton, MA, that is associated with Tufts University and is reportedly the top facility in New England for dealing with sick or injured birds.

Kaeser said that she had been in touch with the Department of Energy and Environmental Protection, which needed to be involved in the removal of the hawk, as well as the United States Fish and Wildlife Service in order to have the bird transported across state lines.

Kaeser said that if the bird’s demeanor appeared to be improving on Friday afternoon, when the group agreed to meet to try to effect a rescue, then it would be left in place. Sadly, that was not the case.

Although a cherry picker was secured in order to reach the bird, it was determined that the hawk was too high in the tree – at least 70-80 feet off the ground – for the cherry picker to reach.

The West Hartford Fire Department came to the rescue – sending over Quint 3 – and after determining that the excavated ground on the Delamar Hotel construction site was stable enough to hold the 83,000 pound truck, the truck’s bucket and ladder were used to reach the bird.

DEEP Wildlife Biologist Brian Hess, accompanied by firefighter Brendan Coen, were able to get to the bird and Hess caught it in a net.

Kaeser was waiting on the ground with a box and immediately whisked the hawk off to Tufts.

“He moved away a little bit, but it wasn’t a huge fight,” Hess said. “It would have been if it was a healthy bird. He didn’t look good.” Hess was particularly concerned that the hawk had a little bit of blood visible in its mouth.

Hess, who has worked for DEEP since September and did a lot of eagle banding in the fall said this was his first rescue of a hawk in a bucket truck. “If you told me I was going to do this today, I would have been surprised,” he said.

West Hartford Fire Chief Gary Allyn said this was the first time the department had been involved in the rescue of a hawk, although firefighters did rescue a parakeet one time.

“It may say ‘Fire Department’ on the door but we do it all. People call 9-1-1 because they have a problem and we’ll solve it,” Allyn said.

The entire rescue process took no more than 15-20 minutes.

Cavallero said that the doctors at Tufts will do blood work and a physical exam to determine if the hawk has poisoning and to figure out how to treat it. She said that the prognosis and the protocol depend on how far the poison has spread in the young bird’s body and how well its immature immune system can respond.

Berzenski said that it’s possible, if the bird survives, that it will be brought back to West Hartford and released into the same area.

Charles Bonser, manager of the Delamar construction site for JCS Construction Group, has been supportive of the group’s efforts to track and assist the hawk and was on the scene Friday afternoon to provide any possible assistance. He said that the pine tree that holds the nest and has been left in place for the hawk will eventually be taken down but he’s not sure when.

“That poor bird. After all that I hope it’s okay,” Bonser said.

Kaeser said that the hawk made it to Tufts but appeared to be in bad shape with fresh blood in its mouth. Check back with We-Ha.com for updates on the hawk’s progress. 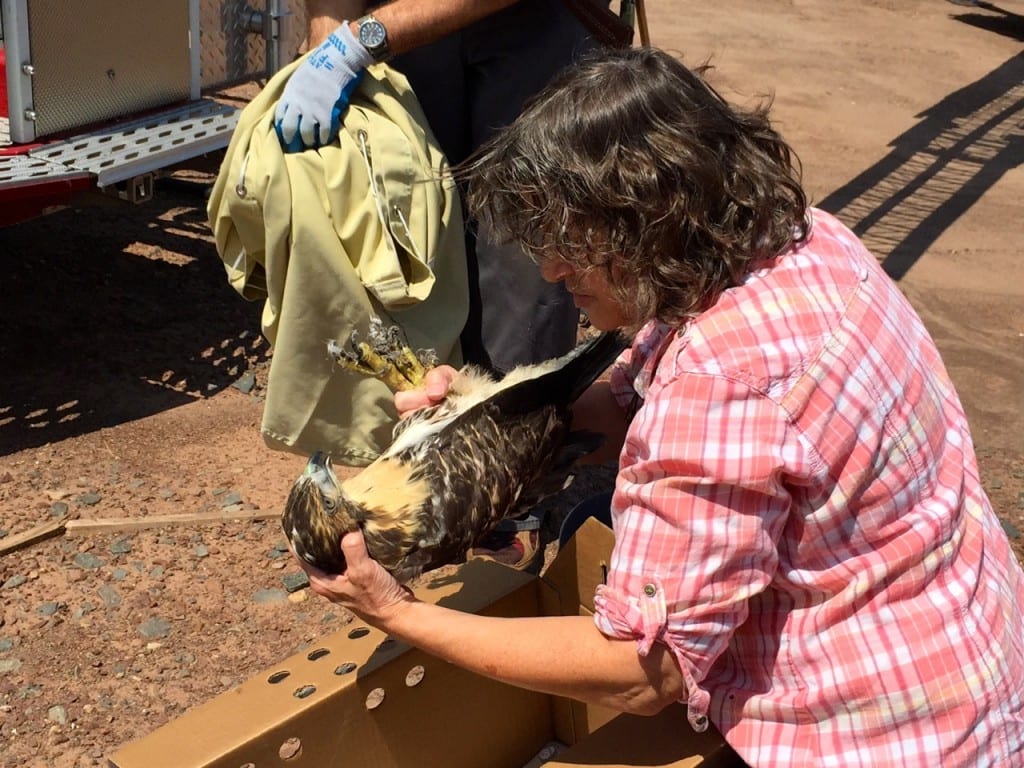 Mary-Beth Kaeser of Horizon Wings takes the young red-tailed hawk from Brian Hess of DEEP and prepares to drive it to Tufts Wildlife Clinic for treatment. Photo credit: Ronni Newton 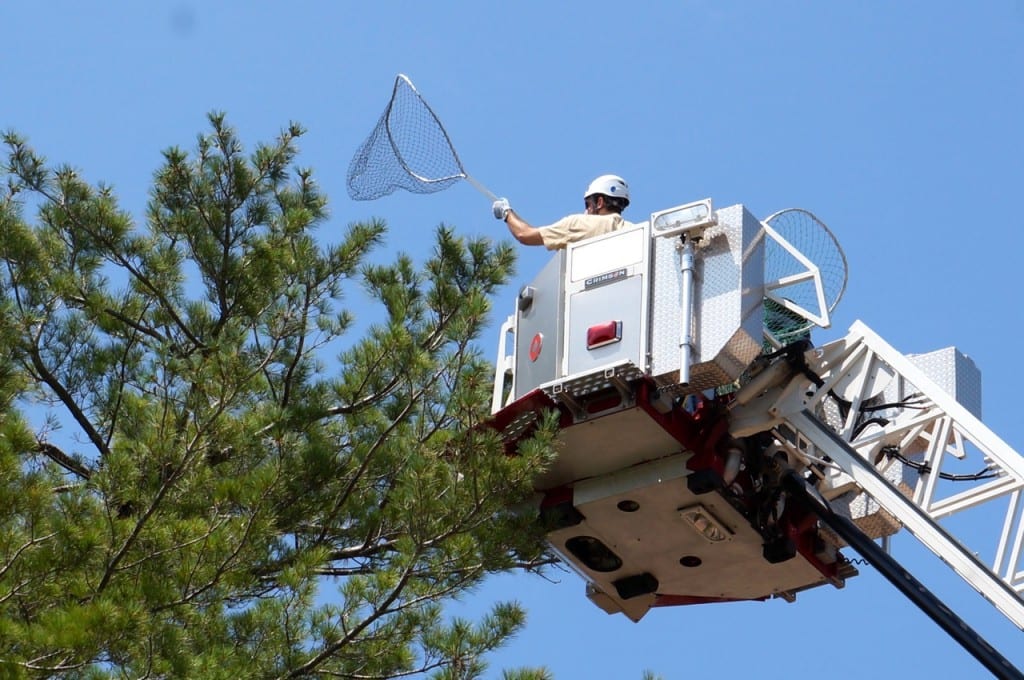 DEEP Wildlife Biologist Brian Hess uses a net from the bucket of a WHFD truck to remove the hawk from the pine tree on the Delamar West Hartford hotel site. Photo credit: Ronni Newton 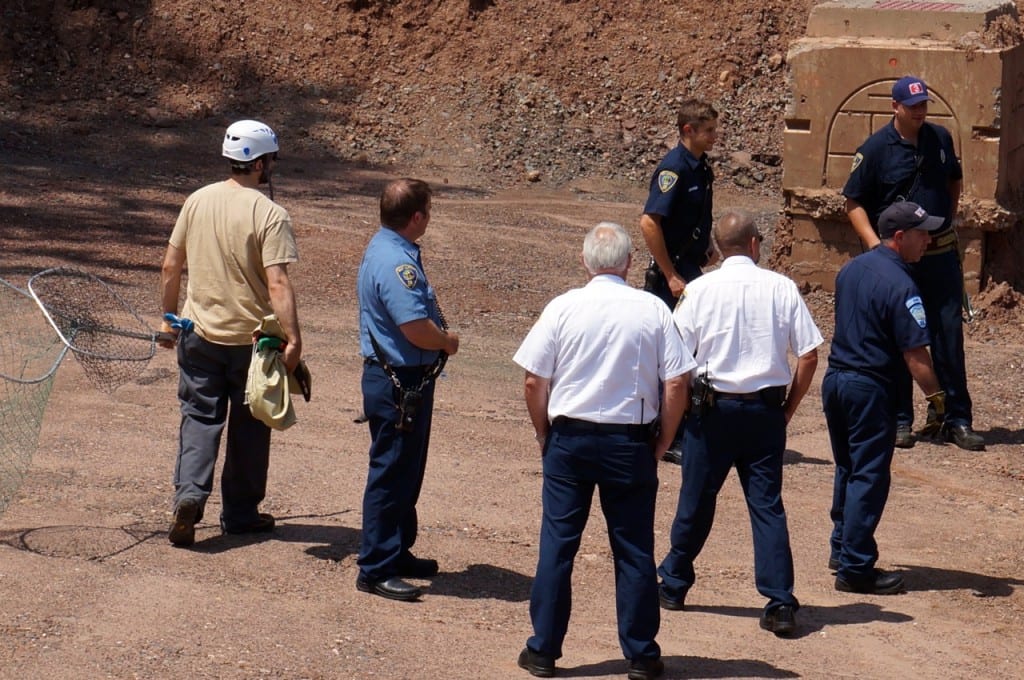 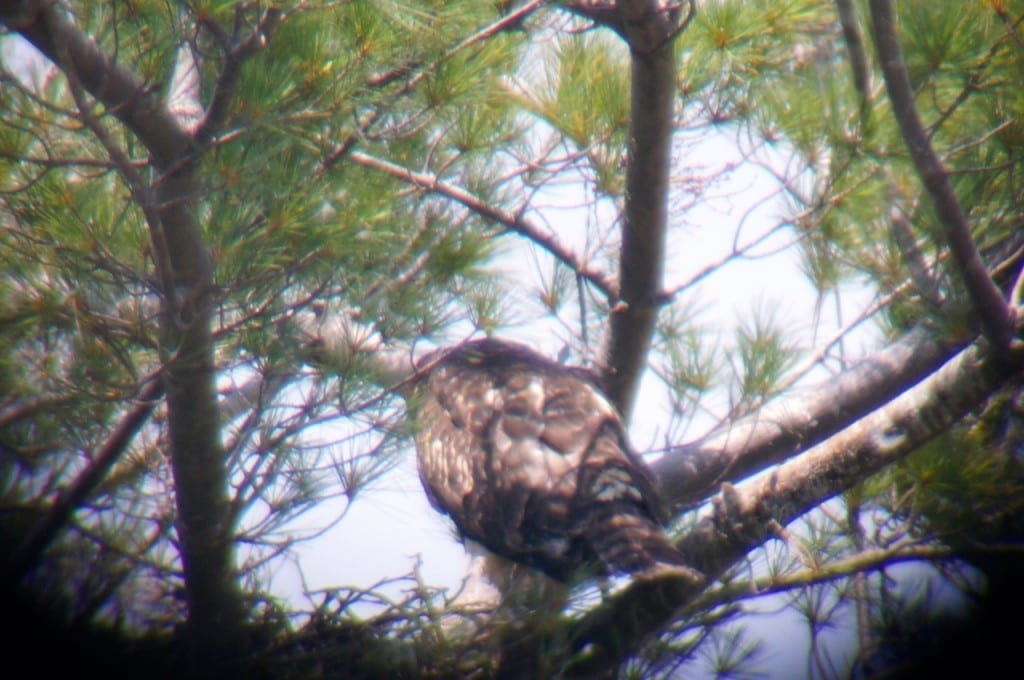 Baby Delamar before its rescue from the pine tree on Friday afternoon. Photo credit: Ronni Newton