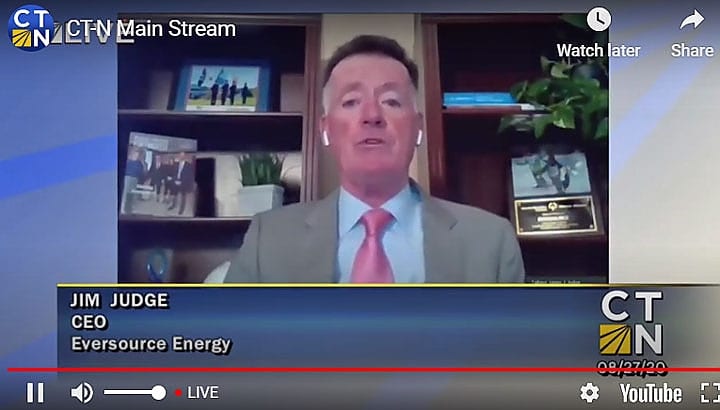 Among the questions asked was why Eversource is not planning to pay customers back for spoiled food or medications.

Following weeks of criticism about its preparedness for Tropical Storm Isaias, Eversource Energy is defending itself and its preparation for the storm.

“I fully understand that our customers don’t think we’re doing a good job and I don’t know whether that’s because of the price … that’s paid or whether it’s legacy performance issues going back decades but this is a highly performing company,” Eversource Energy CEO James J. Judge told the legislature’s Energy and Technology Committee during a virtual hearing on the storm response Thursday morning.

Judge and other Eversource executives appeared before the committee Thursday via Zoom and attempted to dispel the widespread belief they were unprepared for the storm, which knocked out power to more than 800,000 of its customers.

The company is also facing an investigation by the Public Utility Regulatory Authority. PURA Chairwoman Marissa Gillett said that based on the documents Eversource shared with the state before the storm, the company planned for an outage of between 125,000 and 380,000 customers.

In a letter to the committee, Judge and two other executives defended the actions they took leading up to the storm.

“We brought in more than 3,300 line and tree crews to restore power and we were able to provide lodging for more than 6,000 employees and contractors in the COVID-19 environment. We could not have managed this challenge logistically in the few days after the event, without being fully prepared,” Judge and the executives wrote in the letter.

During the hearing, Judge said they saw 30% more damage from Tropical Storm Isaias than they did from Superstorm Sandy or Tropical Storm Irene. He said the only storm that caused similar damage was the 2011 Nor’easter.

“Nobody – nobody that I’m aware of predicted that Connecticut would see a storm with impacts significantly bigger than Superstorm Sandy or Irene,” he said.

He said the final University of Connecticut model estimated 6,000 trouble spots; the storm caused more than three times that damage, or 21,000 damage locations.

He said that unlike other storms, the damage wasn’t localized to a region and had greater, more widespread impact than Sandy and Irene.

Judge said within a few hours of the storm rolling through, they brought in more resources and tripled the number of restoration crews. He said they saw more damage and were able to restore power to all of their customers much quicker than they did in 2011 following the Nor’easter, which in some instances took 13 days. He said the longest outage during Tropical Storm Isaias was nine days.

During the hearing, lawmakers questioned whether Eversource prioritized shareholder profits over ratepayers. Judge said company metrics suggest Eversource is doing right by its customers and shareholders.

Sen. Norm Needleman, D-Essex, said those metrics did not matter if the company’s customers thought it was doing a bad job.

“Pretty much unanimously, everybody in the state of Connecticut believes that your company operates for the benefit of shareholders and the benefit of the executive. I believe that a more holistic approach needs to be taken. You need to demonstrate that to the public continually and be more sensitive to the ratepayer and less focused on reminding shareholders in the midst of a terrible power outage, that they don’t have anything to worry about, the share price is going to do just fine,” he said.

Others asked why the utility has refused to reimburse customers for spoiled food and prescription medicine despite its financial success and “generous executive compensation packages.”

“You’ve admitted that people are suffering and that you empathize with them,” Rep. David Arconti Jr., D-Danbury, said. “How come you haven’t made the move on your own?”

Judge said the company is not required to pay for food and medicine spoiled in the event of an “act of God.”

The Energy and Technology Committee wanted to know how so much damage could be done if the utility was keeping up with a tree trimming program.

Judge said the tree damage from this storm was extensive despite its tree trimming efforts.

Rep. Jonathan Steinberg, D-Westport, said he didn’t see the significant investment in infrastructure and tree trimming that Judge talked about. He said the infrastructure is similar to the 1960s with lots of poles and very little burying of lines.

Craig Hallstrom, president of regional electric operations for Eversource, said the changes they’ve made really show in reliability over the past few years.

“We know what’s happening on the system real-time and we can take real-time action,” Hallstrom said of the improvements to the grid that have been made.

However, communication with municipalities created during the 2011 storms seems to have deteriorated.

“I have seen just a handful of storms come through during my time in the legislature,” Arconti said. “I have never seen mayors and first selectmen react with such outrage over the communication” between the utilities and towns.

Needleman said he didn’t hear from a first selectman who felt communication was good.

“Clearly there was a disconnect in preparation for this storm,” Needleman said. “But anyone can get the weather wrong.”

Judge said they will take a look at the communication breakdown as they do their post-storm review.