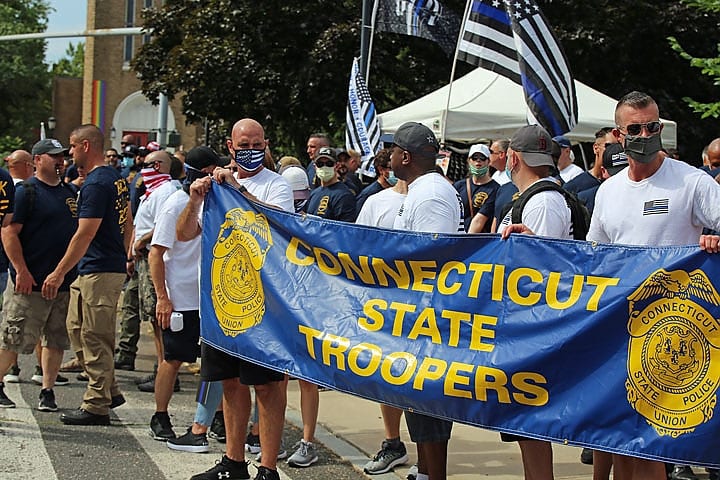 The State Police Union plans to file an appeal regarding the decision.

The Connecticut State Police Union will file an appeal after a federal judge denied its request for a preliminary injunction barring the state police from releasing certain personnel records to the public under the new police accountability law.

The union which represents nearly 1,000 state troopers will ask the Second Circuit Court of Appeals to step in, said the union’s executive director, Andrew Matthews.

The union filed a lawsuit against James Rovella, the commissioner of the Department of Emergency Services and Public Protection which oversees the state police, in August, just days after Gov. Ned Lamont signed the police accountability bill into law.

A portion of the legislation reverses a key part of the state police contract approved by the legislature in May 2019 that prohibits the public release of personnel documents if an investigation determines allegations of wrongdoing are unfounded or unsubstantiated.

The lawsuit contended that the state violated the U.S. Constitution by seeking to alter a contract that had been negotiated and that troopers would be subject to harm if the public had access to unsubstantiated allegations.

But Haight agreed with attorneys for the state, representing Rovella, that the police accountability law was not intended for anyone’s self-gain but rather a legitimate public interest.

“As evident from the public record, the Act was adopted to promote greater transparency and accountability for law enforcement,” in the wake of the death of George Floyd in Minneapolis, Haight said in his ruling.

Haight had previously denied the union’s bid for a temporary restraining order barring the state police from releasing the internal affairs documents while the lawsuit was pending.

“We think the court reached the right decision, and are awaiting the plaintiff’s decision on an appeal,” said a spokesperson for the Office of the Attorney General William Tong.

Matthews said the state police have been dealing with the legal wrangling over the internal affairs documents by making people who request the reports aware that the documents are the subject of litigation and may not be made public for a period of time.

“The agency has agreed to honor the contract until the courts sort it out,” Matthews said.

Legislators did not discuss the portion of the state police contract in question when they held a public session reviewing the pay raises and other collective bargaining points before it was unanimously approved in 2019. The contract goes through 2022.

At the time, critics, including members of the state’s Freedom of Information Commission, pointed out that the contract allows state police to circumvent Freedom of Information laws and doesn’t add to the public’s trust since no one would be able to scrutinize how the internal affairs investigations were conducted.

The 65-page police accountability law includes new standards for training in de-escalation and for how deadly use of force incidents are investigated, along with other provisions to reform how policing is done in Connecticut.

The portions of the state police contract that were impacted by the law were already the subject of a state labor grievance filed by the union after state police officials under Rovella were instructed to release the documents.

The union won the grievance on June 10 with the agency required to ask troopers if the release of a substantiated allegation would be an invasion of privacy. The agency was also required to stop releasing any reports related to allegations that were deemed “unfounded.”

But troopers were notified shortly after the passage of the police accountability law in late July that all internal affairs reports would be released despite the labor grievance ruling, Andrews said in the lawsuit.