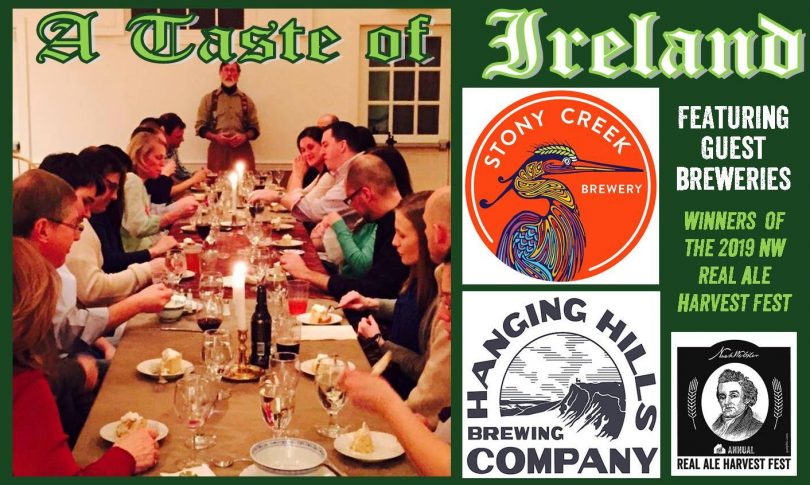 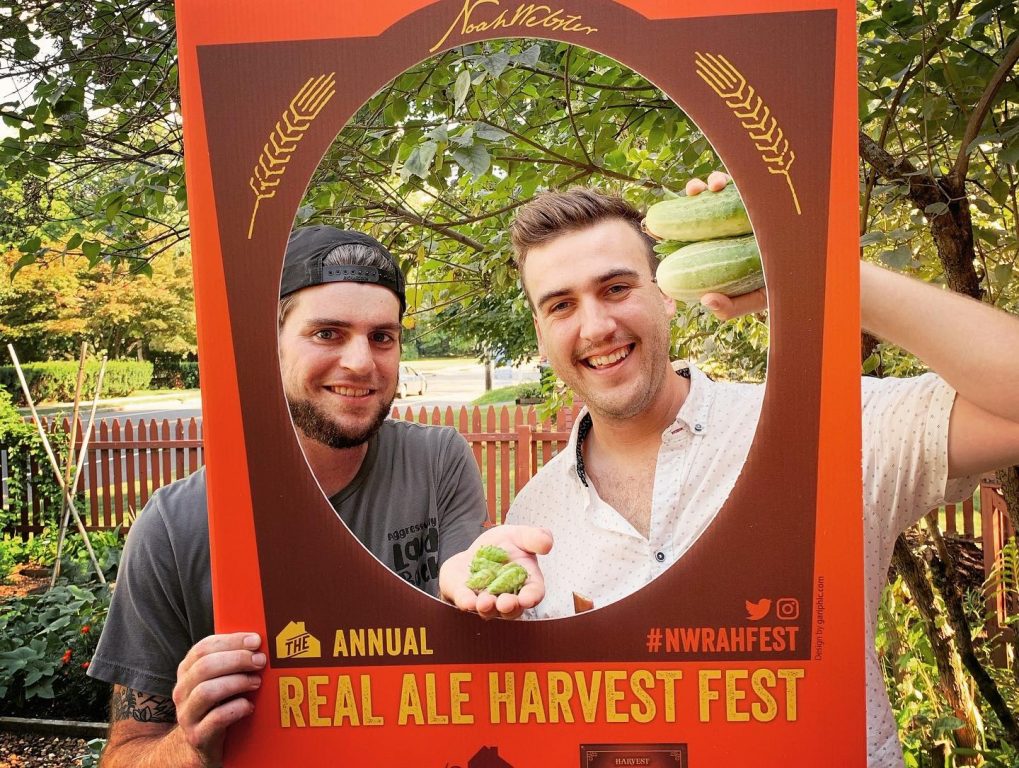 Stony Creek Brewery collecting items from the Noah Webster House garden to use for their entry into the 2019 Noah Webster Real Ale Harvest Fest. Courtesy photo

On each night at 6 p.m., guests will be treated to a St. Paddy’s family-style dinner, featuring Irish soda bread and butter, salad and pickled beets, Irish Beef & Stout Stew, and apple crisp for dessert. A fire will be roaring in the 18th-century hearth, where guests will find libations including beer and wine. A special treat this year – two guest breweries will be taking over the Noah Webster House tavern!

Stony Creek Brewery of Branford, CT, will be onsite on Friday, March 13 with samples from their brewery and a special cask of real ale made for this event. Stony Creek is known for their fusion of clean, bold and aggressive West Coast flavors and East Coast balance and drinkability, what Stony Creek calls “aggressively laid back beer.”

On Saturday, March 14, Hanging Hills Brewing Company will be taking over the taproom, presenting selections from their Hartford, CT, brewery. Hanging Hills’ use of locally sourced ingredients (hops from Connecticut, barley grown and malted in the Pioneer Valley), time tested techniques, and a hard-earned attention to detail allows them to utilize the creative side of their brewing skills.

Stony Creek’s cask of real ale, a watermelon gose brewed with fresh crushed watermelon and a dash of salt, took the title of Cask Champion. Hanging Hills won the Tasters’ Choice Award with three entries: a blueberry sour ale aged on brettanomyces, a peach sour ale, dry hopped with mosaic, and a milk stout brewed with lactose, maple syrup, and chocolate. The museum is thrilled to welcome these two winning breweries back to the house!

After dinner there will be live entertainment.

The Jovial Two, singers of folk songs of the sea, shore, and pub will perform on Friday, March 13. Joseph Morneault is an interpreter and historian of early American song and music of the sea; Tim Marth is a well-known folk singer along the lower Connecticut River region. In honor of St. Patrick’s Day, they will regale the audience with songs known amongst the Irish immigrants who came to our shores. Singing along from the audience is encouraged!

On Saturday, March 14, Rick Spencer and Dawn Indermuehle will perform a mix of entertaining and amusing songs from the Irish and Irish-American traditions. Rick and Dawn develop and present theme-based music and history programs, showcasing music that gives cultural insight into interesting times, places, and events in American history. Rick and Dawn carefully craft their vocals and accompaniment to sound as true to a song’s era or style as possible. Their vast repertoire includes music from the Colonial era to the present day.

After dinner, guests are invited to step into the lantern-lit c.1720 historic birthplace of Noah Webster and try their hand at historic tavern games of his era, such as Skittles, Captain’s Mistress, and Shove Ha’penny. Or, guests can lounge in the “tavern” and partake of another brew from Stony Creek or Hanging Hills.

Tickets for this event are $45 per person, or $40 for museum members. Advance registration is required and available at noahwebster.yapsody.com. Entry includes dinner, one complimentary drink (beer or wine), live entertainment, and tavern games. Additional beer and wine will be available for purchase. The Noah Webster House & West Hartford Historical Society is located at 227 South Main St. in West Hartford, CT. 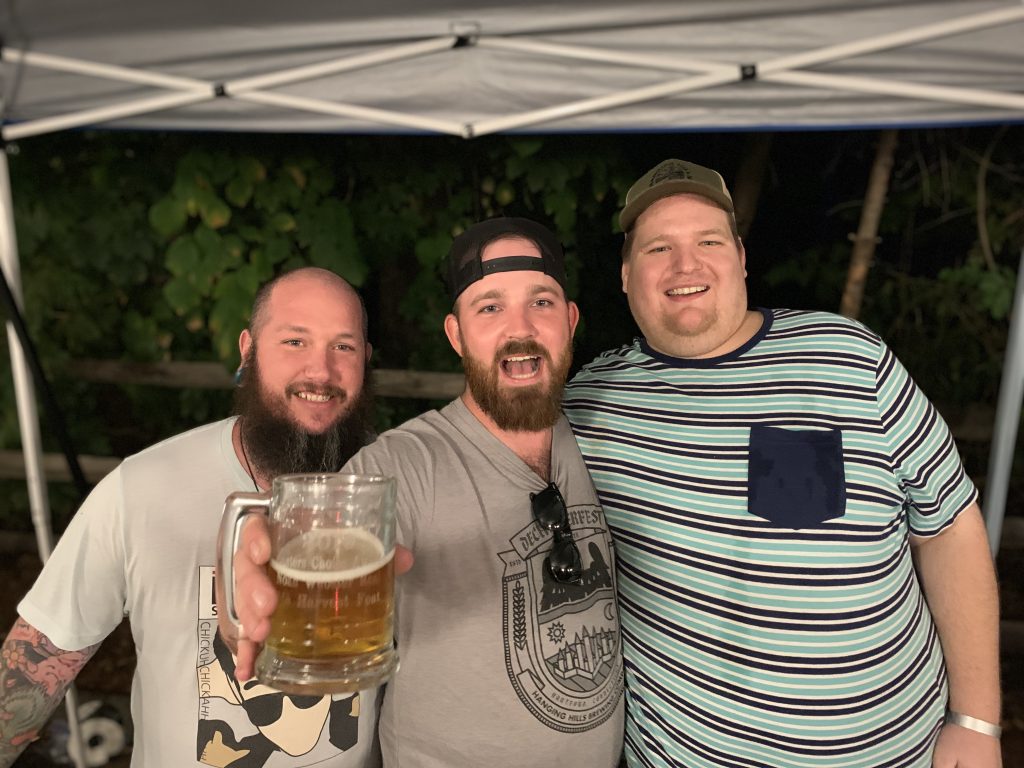 The museum would like to thank the Hartford Foundation for Public Giving for their continued support.

Stony Creek is a small, experienced team with big ambitions for Connecticut craft beer. They make  progressive craft beers that are both familiar and surprising – high quality, experimental, and exceeding expectations. Stony Creek’s modern brewery, located in Branford, CT, is entrepreneurial in spirit and designed for growth. They have created a stunning taproom so that their customers can get closer to the action and share their passion and sense of community.

Hanging Hills Brewing Company takes its name from the trap rock ridges of Meriden, where legend has it a mystical black dog roams. The first interaction brings a sense of elation and joy. A second brings the strange sense of existential unease. But the third will be the last interaction with any being. For Hanging Hills Brewing, the significance of these local peaks encompasses a sense of adventure and mystery, properties that their beers embody. Realizing that the best beers require ingenuity and a dogged pursuit of quality, Hanging Hills’ use of great ingredients, time tested techniques, and a hard-earned attention to details allows them to utilize the creative side of their brewing skills.

The Noah Webster House & West Hartford Historical Society is a cultural destination where citizens can learn to understand and appreciate the past. The museum preserves the birthplace of Noah Webster, the founding father, educator, author, and lexicographer who taught generations of Americans what it means to be American. This National Historic Landmark is also a repository for the history of West Hartford, the community that molded Noah Webster’s future and is still thriving over 250 years later. The historic house and exhibit spaces are open daily 1 until 4 p.m. For information on the museum’s extensive school and public programs, please visit www.noahwebsterhouse.org or call 860-521-5362.