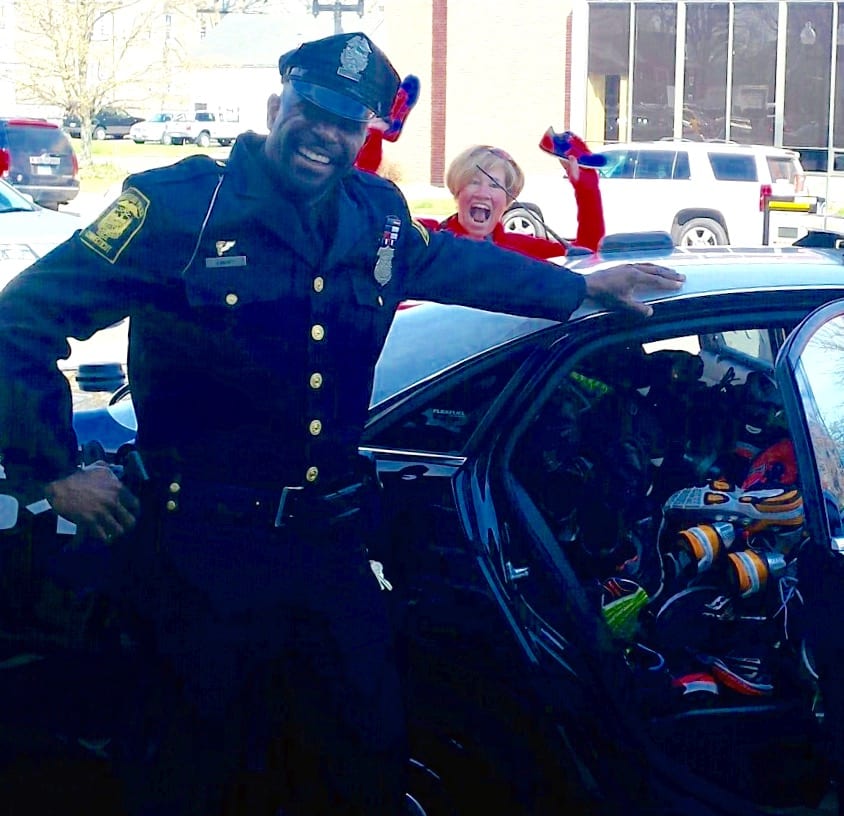 More than 400 pairs of shoes to be distributed to homeless adults and children in Hartford were collected Saturday at Fleet Feet West Hartford. 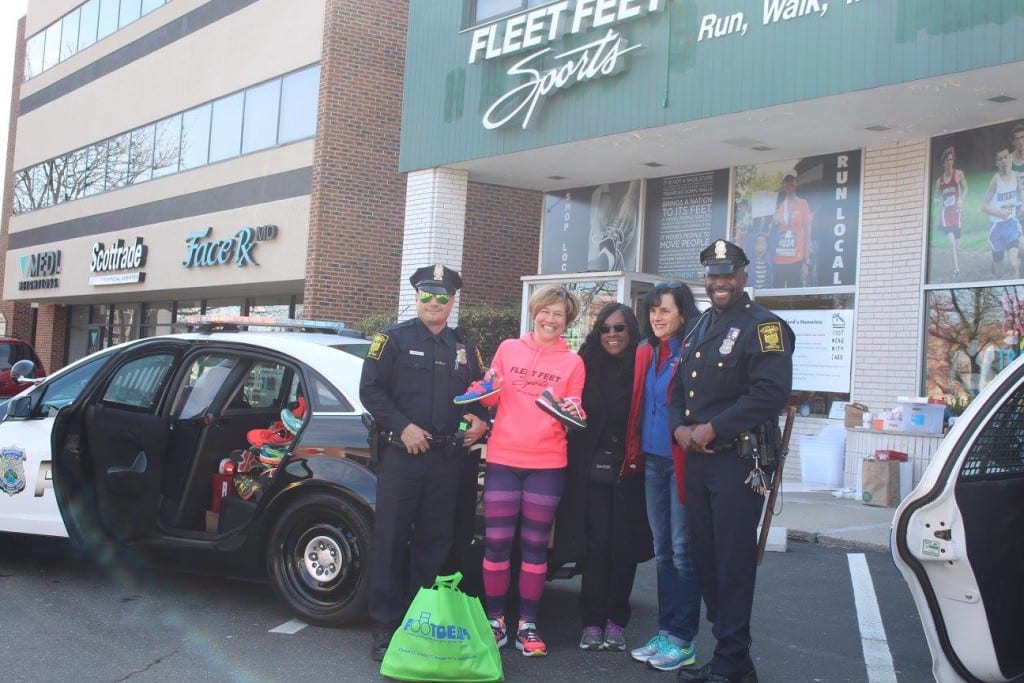 An extra police car had to be called in for support at an event at Fleet Feet in West Hartford on Saturday, but not because there was a problem. 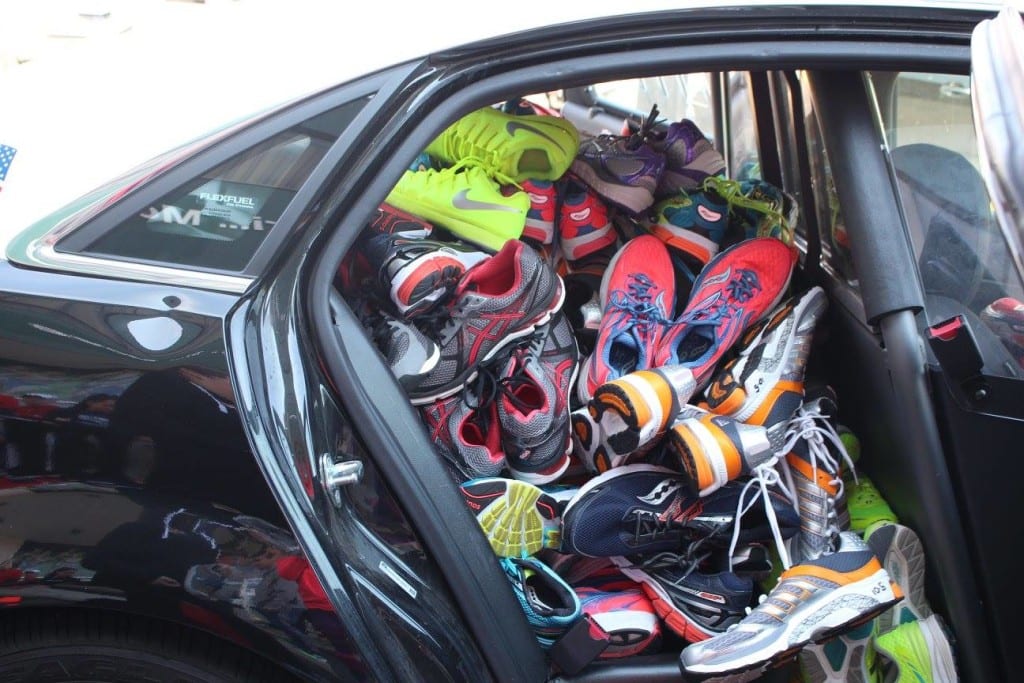 The first police cruiser was filled to overflowing with donated shoes. Courtesy photo

The extra cruiser was needed because the goal of Saturday’s event – stuffing a police cruiser with shoes for homeless adults and children in Hartford – was exceeded by so much that all of the donated shoes didn’t fit into one car.

Fleet Feet West Hartford partnered with the non-profit Community Partners in Action as well as Connecticut Podiatric Medical Association and the Hartford Police Department for Saturday’s event – “Footwear with Care.”

“We would not have had this program without [Fleet Feet owner] Stephanie Blozy,” said Abby Moore of Community Partners in Action. 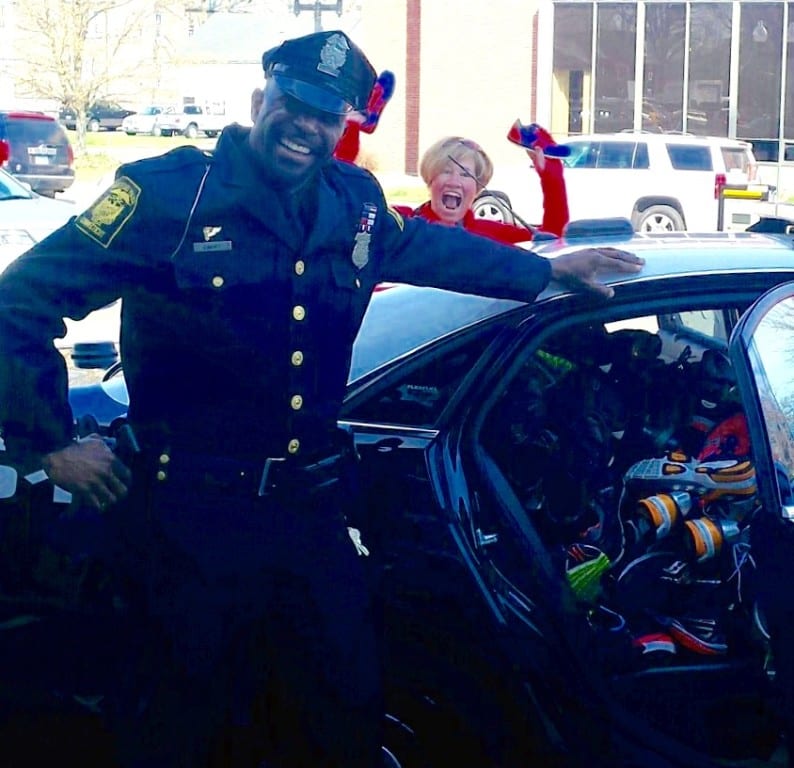 A decent supply of clothing for the homeless is available through charitable organizations, but footwear is often unavailable, in bad condition, or ill-fitting. “The shoes have no support, offer no protection from the elements,” Moore said.

Hartford Police Off. Jim Barrett, an Iraqi War veteran and advocate for the homeless, inspired “Footwear with Care” after meeting a homeless veteran whose only shoes were a pair of “disintegrating” flip flops. Barrett, who works the Community Court beat, bought the man new sneakers.

“Blozy said, ‘Let me help,'” Moore said. She gave an initial donation of 60 shoes to Community Partners in Action last month, and they were distributed immediately, said Moore. Blozy and Moore both realized that additional support from the community was needed, and Footwear with Care was launched.

For Saturday’s event, which was held from 9:30 a.m. until 12:30 p.m., Fleet Feet offered to donate a new pair of shoes for every $25 donation to the program. “Like new” donations of shoes were also accepted.

Blozy and Moore both called the event a major success, with more than 400 pairs of shoes collected as well as nearly $1,000 in cash donations which will be used to purchase socks and additional shoes for the homeless. 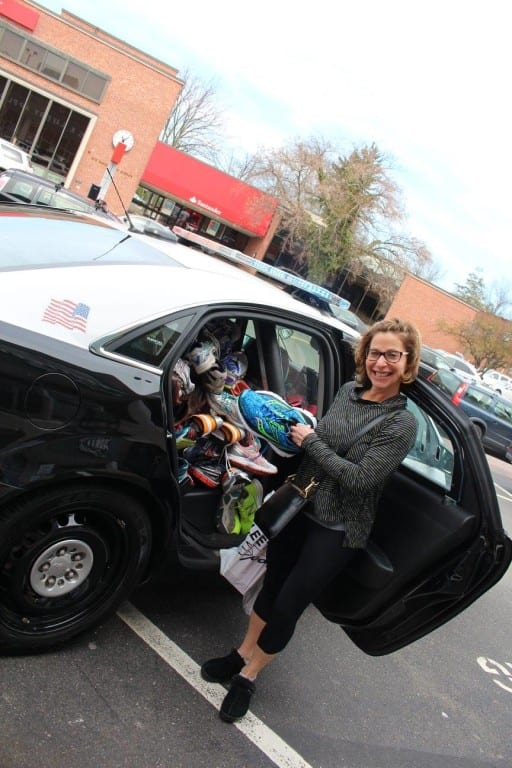 “It was so heartwarming to see so many Fleet Feet friends, including Deputy Mayor Shari Cantor, taking the time to stop by and donate. Several of our vendor partners (Adidas, Asics, Brooks, New Balance, Saucony and The North Face) were super generous and sent over 200 pairs of new shoes and socks,” Blozy said.

Moore said that the Community Partners in Action will distribute the shoes beginning this week through a variety of channels, ensuring in all cases that the footwear fits properly. They will work through the directors at homeless shelters, and also provide shoes to victims of domestic violence who often escape to a shelter with nothing.

In the future, Footwear with Care plans to hold free clinics to provide free holistic foot care to homeless men, women, and children. The first will be held later this month.

“Today’s kindness puts us in a great position for our Foot Clinic at Holy Trinity Church on April 23 when we will provide foot care and footwear to 100 homeless men, women and children. Thanks to some of our favorite podiatrists like Dr. Marc Lederman and Dr. Lynne LeBlanc [of the Connecticut Podiatric Medical Association], the homeless will have their feet examined and treated, then will be given a pair of socks, shoes and a foot care kit. With so many shoes collected, we should be able to host these Footwear with Care clinics several times a year,” said Blozy. “Bringing good to our community, one shoe at a time!”

According to Moore, other supporters of the the effort include Footprints of Newington; Mickey Finn’s; REI; RisCassi & Davis, PC; Hartford Foundation for Public Giving; Asics; The North Face; Saucony; and New Balance.