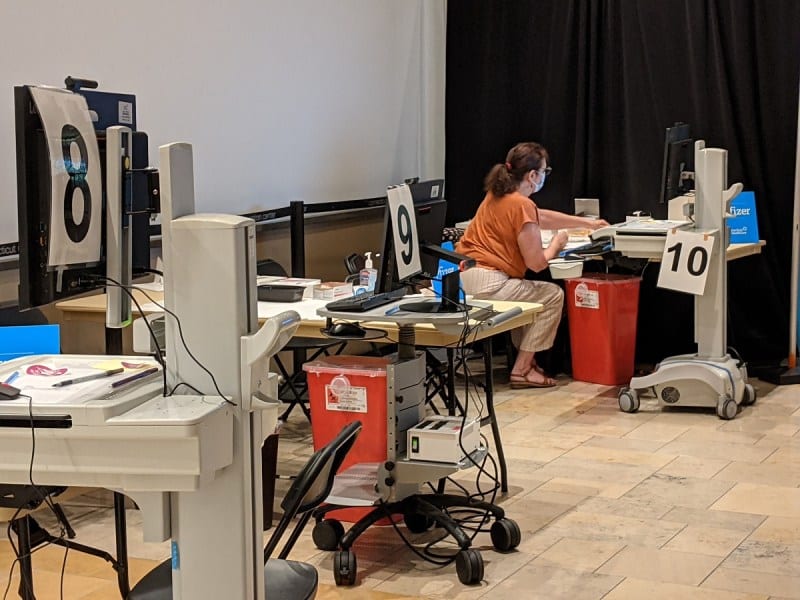 Hartford HealthCare began packing up its mass vaccination clinic at the Connecticut Convention Center Wednesday in response to waning demand for COVID-19 vaccines and a shift to a more mobile approach to the inoculation effort.

“Today marks a turning point for us, a pivot. So we’re moving from these large locations – these mass vaccination centers – to now developing our community approach,” Jeffrey Flaks, president of Hartford HealthCare, said during a press conference. 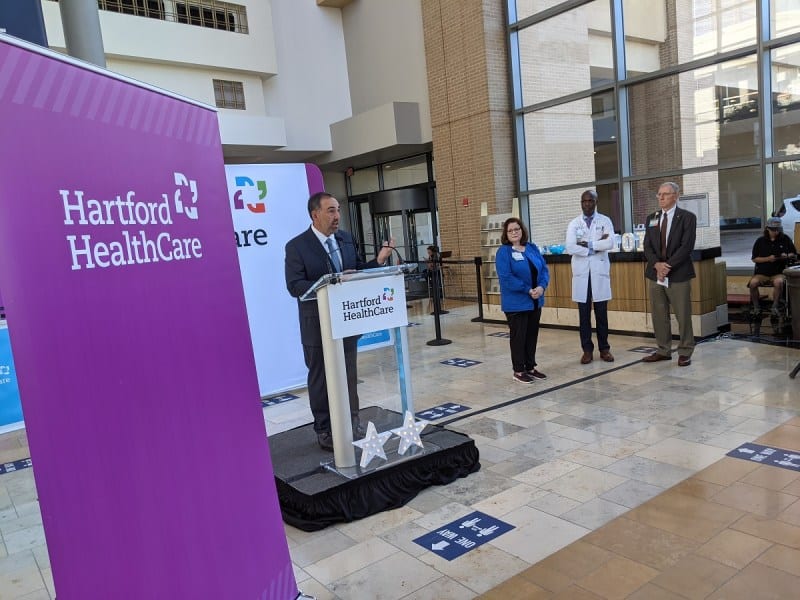 The community approach will largely involve a diffuse set of smaller clinics and a fleet of minivan-based mobile clinics. The pivot comes as the volume of vaccine-seeking patients decline at the convention center site, which has been in operation since late December.

At its highwater mark, health care staff at the convention center vaccinated a rush of about 1,600 patients during a single day in mid-April. Nurse Karen Pagliaro said the mass-vaccination effort was an emotional experience at times.

“Some people came in really excited. ‘Let me roll up my sleeve, I can’t wait to get this shot.’ Then there were others who were nervous and sad. We had tears. Our staff would hold people’s hands and, you know what? We even gave hugs,” Pagliaro said. 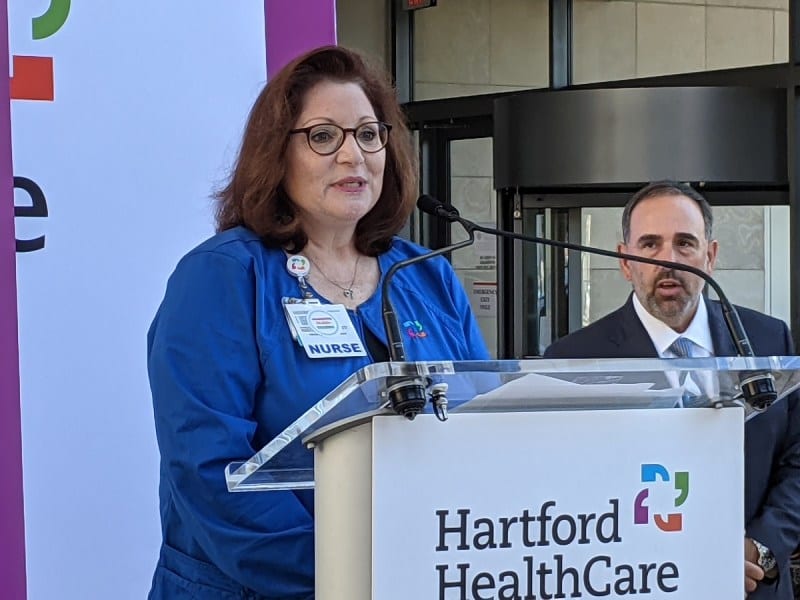 But demand at the site has slowed to a trickle. A handful of patients were waiting to take the shot as media cleared out of the lobby following the press conference. Pagliaro said there were 37 appointments for Wednesday, the clinic’s final day of operation. She expected there may be another 15 to 20 walk-ins before staff closed up shop at 6:30 p.m.

The decline in vaccine uptake reflects trends around the state. The state’s most vulnerable populations have largely already taken the shot. As of last week, 95% of Connecticut residents 65 and older had received at least one dose. Younger age groups, however, have been more reluctant. About 56% of people between 18 and 24 had been at least partially vaccinated.

This summer’s transition to more targeted outreach is not unexpected.

“It’s on us to take away the concerns of the risks – the hesitancy that we know exists,” Dr. James Cardon, Hartford HealthCare’s chief clinical integration officer, said. “This is the point in time we knew we’d get to. This last bit is going to be the hardest and we just need to be completely attentive to it.”

Among all age groups, Connecticut’s vaccination rate stood at a little less than 62% last week. As public health officials try to encourage hold-outs to take the shot, they’re also watching for spread of the more-contagious Delta variant of COVID-19.

COVID rates have been low in recent weeks and are expected to remain that way through the summer. There were only 40 new cases reported Tuesday at a rate of 0.56%. However, Keith Grant, an advanced practice registered nurse and a senior infection prevention official at Hartford HealthCare, said about 6% of new cases in Connecticut appeared to be Delta variants, which he said were 40% more contagious and 2.5 times more likely to cause a patient to need critical hospital care.

“Connecticut’s in a good place on that and especially in the populations that are most vulnerable, Connecticut is well over 90%. That’s really good,” Grant said. 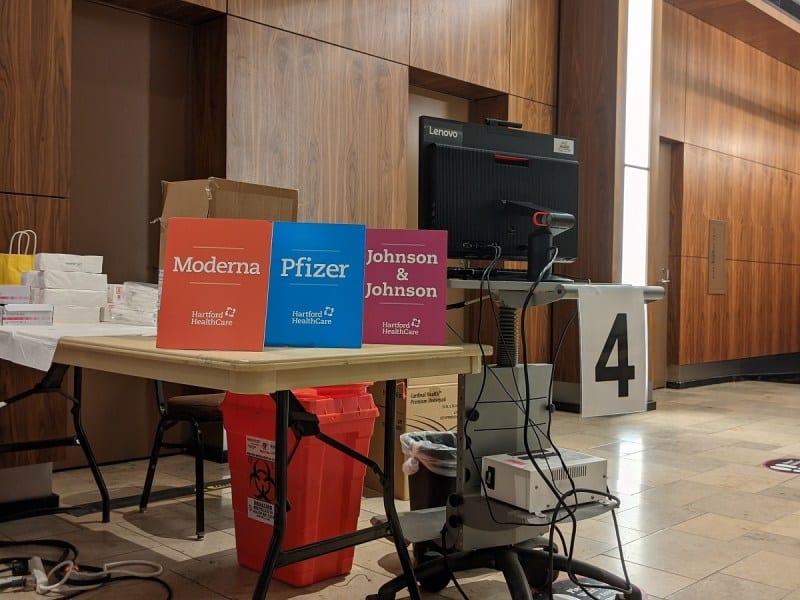 There was a celebratory air to Wednesday’s press conference in the lobby of the convention center. Flaks called the clinic’s closure a “monumental moment in time,” signalling the last chapter of the coronavirus pandemic.

The Connecticut Convention Center, one of several mass clinics winding down this week, has been a versatile location since the outset of the pandemic last year. It was an early COVID testing site in March of 2020. Later, it was converted to a temporary, 600-bed field hospital.

“To now be in this moment where, behind us and around us today, we’re really breaking down this center, it signifies an enormous moment in progress in our community defeating this virus,” Flaks said.

Cardon put it another way:

“Sooner or later – as kind as these people have been – they want their building back. We’ve taken over their garage, their main display center and their lobby. I think it’s time for us to say ‘thanks very much,’” he said.

According to data reported by the state last week, 74.53% of all West Hartford residents have received at least one COVID-19 shot.

“The West Hartford-Bloomfield Health District has administered over 15,000 doses at its various clinics,” Hart said. “The Health District will continue to offer Johnson & Johnson and Moderna vaccines at pop-up vaccine clinics in Bloomfield and at their offices located at 580 Cottage Grove Road in Bloomfield.” 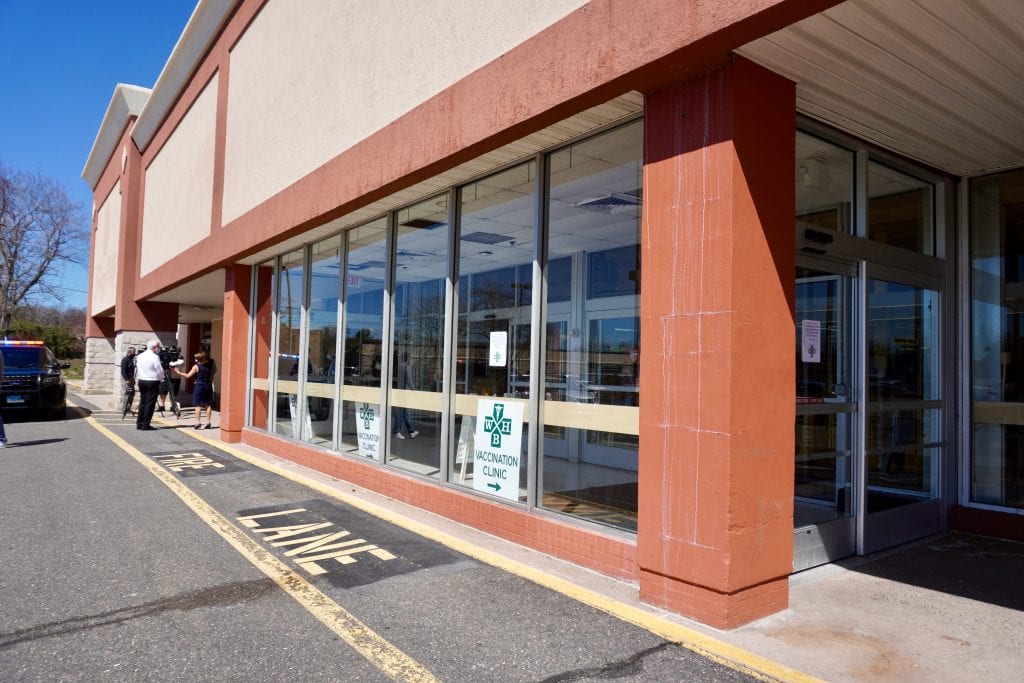