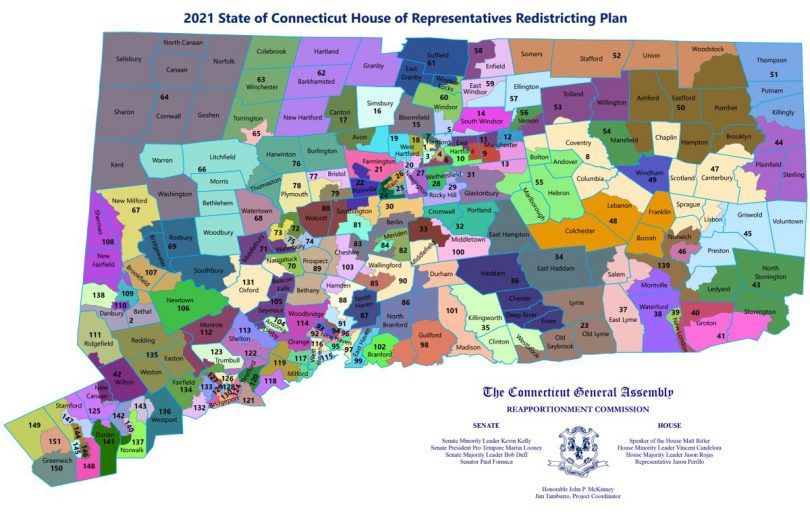 Fairfield County will gain a House seat, while Eastern Connecticut loses one, and West Hartford will be represented by five different representatives, effective in January 2023.

Connecticut’s redistricting panel on Thursday unanimously approved a bipartisan map for updated House districts that creates a new seat in Fairfield County and eliminates one in the state’s eastern region where the current representative is not seeking re-election.

Legislative leaders on the Reapportionment Commission praised the state’s bipartisan process Thursday before approving a plan to adjust the lines of state House districts to reflect population changes recorded by the once-in-a-decade U.S. Census survey.

“There might be a better system, but I don’t know what it is,” House Speaker Matt Ritter said during the meeting. “To make people agree is a really powerful thing.”

The House map is one of three plans the panel is due to approve before a Nov. 30 deadline. Leaders said Thursday they expect an agreement on state Senate districts in the coming days but may need to seek additional time from the state Supreme Court to complete a map for congressional districts.

In broad strokes, the House plan accounts for surging population growth in Fairfield County by establishing an additional district there. Meanwhile, the districts representing smaller towns in eastern Connecticut, where the population has shrunk, will absorb a seat currently held by Rep. Mike France. France, whose district includes Ledyard, Montville, and Preston, is not seeking re-election and is a congressional candidate for the 2nd District.

“So looking at that district was a more natural discussion seeing that we’re having a retirement in our caucus in particular,” Candelora said. “That was a seat that was less controversial to collapse.”

Much of the more drastic changes to the map came in the southwestern corner and shoreline. For instance, districts had to be shuffled significantly in Stamford where the population grew by nearly 13,000 people. The 147th District, which is represented by Democratic Rep. Matt Blumenthal and currently straddles the center of Stamford in a wide crescent and bleeds over into Darien, shrank to include a more narrow patch of land exclusively within Stamford’s borders. Other districts in the town condensed as well.

“Stamford sorta got flattened, in a good way for them, because they had more people,” Ritter said.

Other changes in the area included the 125th District, currently represented by New Canaan Republican Rep. Tom O’Dea, which shifted west to include part of northern Stamford. Meanwhile, Candelora’s district, the 86th, which includes all of North Branford and parts of Durham, Guilford, and Wallingford, will recede from Wallingford and expand into East Haven.

While Stamford districts shrunk due to population growth, districts expanded in Hartford, where the census recorded around 3,700 fewer people than a decade earlier. Although the city retained its current six representatives, some districts grew to include other towns. For instance, the 5th District, which is currently represented by Democratic Rep. Brandon McGee and includes parts of Hartford and Windsor, edged over into the town of South Windsor. 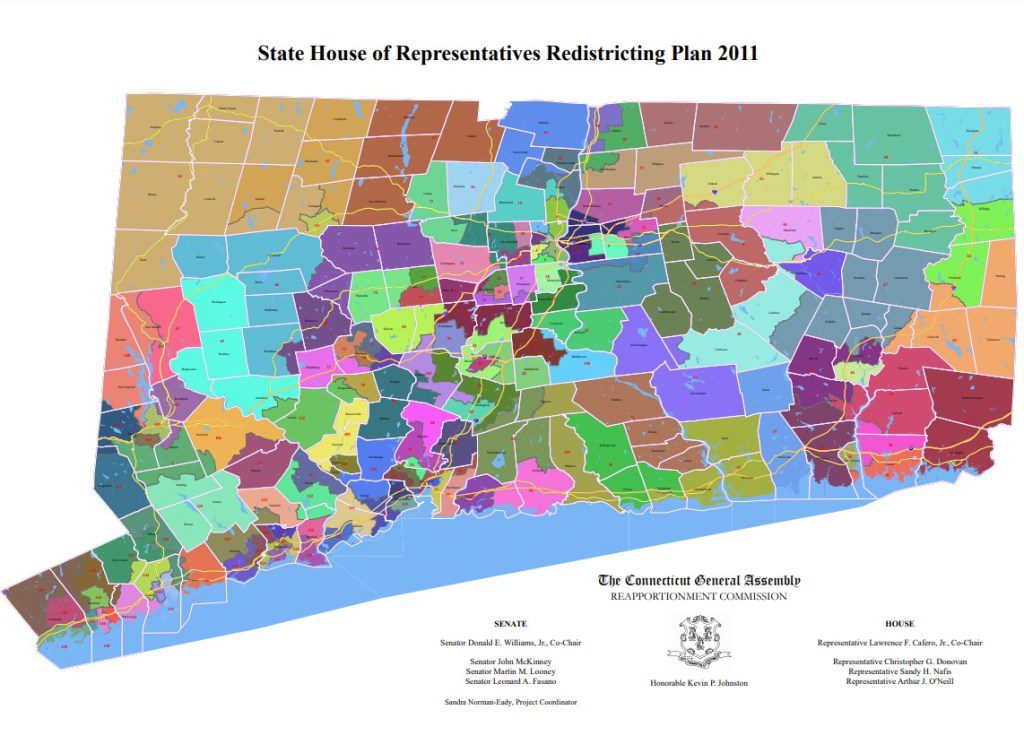 West Hartford had been split into three districts – the 18th, 19th, and 20th, with the 19th district also including parts of Farmington and Avon.

According to the new map, the 19th district no longer includes any of Farmington, but the 20th district, currently represented by West Hartford Democrat Kate Farrar, will now include portions of Newington.

“I will continue to represent Farmington for the next year,” said Tammy Exum (D-19th), but following the November 2022 election, in January 2023 when the new legislature is sworn in, the district she represents will include only West Hartford and parts of Avon.

Any necessary changes to polling places will be determined prior to the November 2022 election, and when candidates begin their campaigns, they will need to consider their new constituencies. 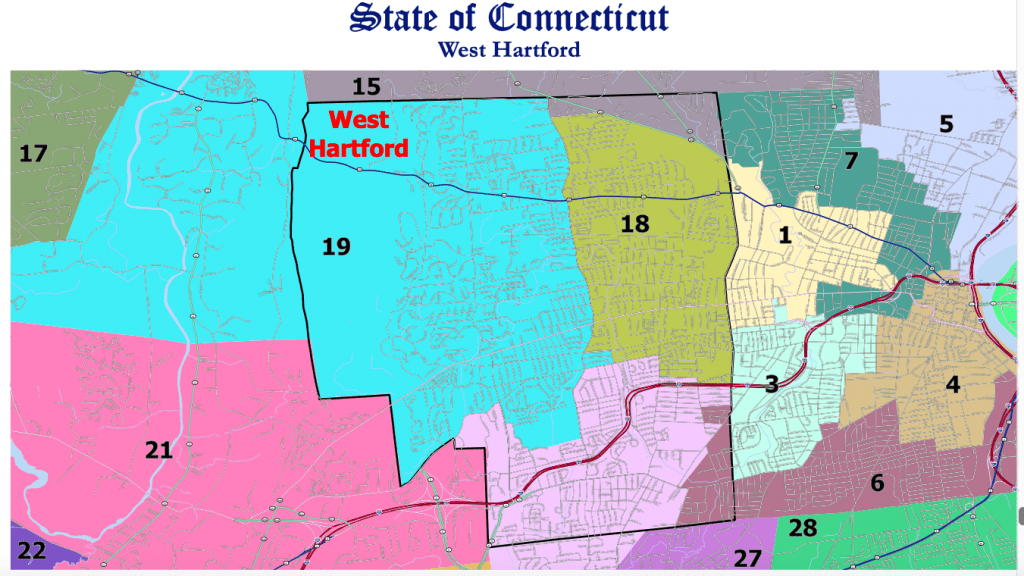 In addition to population fluctuations, the panel tried to produce a map that reflected some of the input it heard during its public hearings held earlier this year. For instance, many residents of Wilton asked that their town be represented by a single lawmaker rather than split between multiple districts. Wilton will now be entirely within the new 42nd District, which was moved from the eastern corner.

The new map is notable as the first to account for the state’s recently-passed prison gerrymandering law, which requires most prison inmates to be counted in the district of their last home address rather than the district in which they are incarcerated.

In general, members of the panel said the changes had only modest impacts on the district lines, but it contributed to a large expansion of the 52nd District, which is currently represented by Republican Rep. Kurt Vail and includes the towns of Stafford and Somers, where several state prisons are located. The new map sees Vail’s district grow to include all of Union and part of Woodstock. Those small towns had previously been entirely within the 50th District, represented by Democrat Pat Boyd.

Candelora said the towns in the 52nd District also reported fewer people during the census.

“They were already down population. It just compounded the problem,” Candelora said. “Overall I don’t think it was that impactful to the process as I thought it would be when the law was first passed.”

Ritter said it was important to the panel to preserve the integrity of the state’s minority-majority districts, where most voters are from minority racial or ethnic backgrounds.

“We did not dilute one of those districts. They’re all the same as they were. That was non-negotiable for anybody in the room,” Ritter said.

Leaders on the panel generally declined to speculate which party may be most favored or disadvantaged by the new House map. Ritter said he expected future wins or losses would be attributed to the candidates involved, rather than because of the new map.

“Maybe a handful of districts you can say the change made a difference or there’ll be a trend, but 10 years ago when they drew the maps, no one thought Fairfield County would be as blue as it is and eastern Connecticut would be as red as it is,” Ritter said. “So trends happen, candidates happen, and my guess is you’ll see many of these seats change hands over the course of 10 years for one reason or another.”