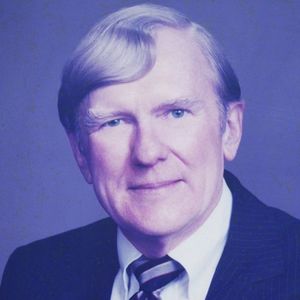 Robert Dunn of West Hartford, who served as principal of Hall High School for 28 years and retired in 1990, passed away on July 18, 2017.

The following obituary has been reproduced with the permission of Taylor & Modeen Funeral Home.

Robert E. Dunn, 89, of West Hartford, CT, passed away peacefully at home on July 18, 2017, from complications associated with Parkinson’s disease and related dementia. Bob is survived by his beloved wife of 59 years, Gladys B. Dunn.

He served on the faculty of West Hartford’s William H. Hall High School for 38 years as history and social studies teacher, department head, guidance counselor, assistant principal, and school principal from 1962 until his retirement in 1990. During his tenure, he was chosen as Connecticut’s Principal of the Year. He taught graduate courses at Trinity College, the University of Connecticut and the University of Hartford.

After retirement, he was Deputy Headmaster of the Seoul International School in South Korea for five years, where Gladys was Director of Admissions. After their return from South Korea, Bob and Gladys enjoyed traveling, particularly world cruises and European river trips, along with winter vacations in Honolulu.

During his long career, Bob received many honors. He served as a trustee for Bates College, which presented him with a Distinguished Service Award and an Honorary Doctorate degree. With his wife, he represented Greater Hartford on a People to People Program in England. He served as national chairman of the High School Student Council Association. He served on a National Commission chaired by the U.S. Secretary of Education and was appointed by the U.S. Department of Education to help choose exemplary schools after Hall High School was awarded that honor. He participated in educational study missions and research work in Russia, Eastern Europe, Turkey, Taiwan and England. He and his wife traveled the world during summer breaks with particular interest in learning about international education systems.

Contributions in Dr. Dunn’s memory may be directed to the Robert E. Dunn Fund at the Hartford Foundation for Public Giving, 10 Columbus Boulevard, 8th Floor, Hartford, CT 06106. This fund assists deserving Hall High School students who have financial need and who qualify to participate in international and domestic educational experiences beyond high school.

A Memorial Service for Robert E. Dunn, is planned for Monday, September 18, 2017 at 11 a.m. at the First Congregational Church, 12 South Main St. in West Hartford Center.