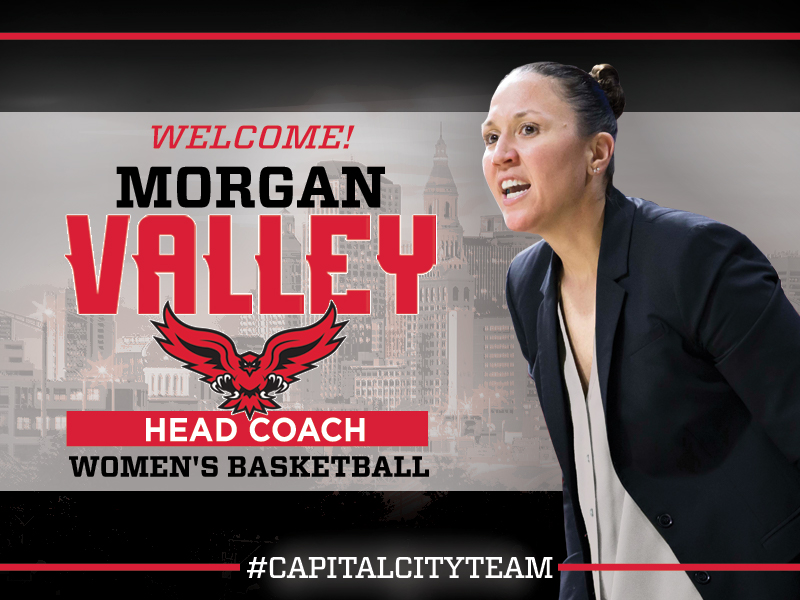 Morgan Valley has been named the new head coach of the women’s basketball team at the University of Hartford in West Hartford.

University of Hartford Director of Athletics Mary Ellen Gillespie announced Wednesday that Morgan Valley has been named the Hawks’ head women’s basketball coach. Valley will be the ninth head coach in the 35-year history of the program.

“This is an incredible opportunity and such an honor to be selected as the leader of the Hartford women’s basketball program,” said Valley. “I would like to thank the players, staff, and administration at Arizona for the time and experience. I would also like to thank President Woodward, Mary Ellen Gillespie, and Craig Sandlin for their patience and kindness throughout this process.”

Valley has experienced incredible success throughout her coaching career with three NCAA Tournament bids – including a Sweet 16 and Final Four appearance – a Women’s National Invitation Tournament (WNIT) Championship and a semifinal finish at the Women’s Basketball Invitational (WBI).

“From the very start of our search process, Morgan’s experience and vision impressed all of us,” said Gillespie. “She has had tremendous success as both a player and a coach, and will be an outstanding mentor for our student-athletes. On top of being a proven winner, Morgan has been a part of leading highly successful programs. After a thorough and comprehensive national search process, there is no doubt that she is the perfect fit for the University of Hartford and our women’s basketball program.”

Valley arrives at Hartford by way of Arizona, where she was an assistant coach under Adia Barnes for the past two seasons from 2017-19. In her first year with the Wildcats, she helped secure the highest-ranked recruiting class in Arizona history, as ProspectsNation.com listed the 2018 class as the fifth-best in the nation. Highlighting that class was Cate Reese, a McDonalds All-American who capped off her rookie campaign at Arizona by earning Pac-12 All-Freshman Team honors in 2019.

The Wildcats took an immediate step forward once Valley arrived on the staff, as Arizona increased its win total by 11 games from 2017-18 to 2018-19. Beating two ranked opponents for the first time since 2002-03 in No. 17 Arizona State and No. 24 Cal State this past season, Valley helped pilot the program to the 2019 WNIT Championship.

Prior to joining Arizona’s staff, Valley spent the previous two seasons at Washington as an assistant coach under Mike Neighbors. In her two years with the Huskies from 2015-17, she helped the program to a 55-17 record from 2015-17, which marked the most wins over a two-year span in school history. With Valley on the staff, Washington made a historic run to its first-ever Final Four in 2016, before posting a school-record 29 wins the following season. Her last stop before Washington was at Virginia Tech, where she was promoted to assistant coach after working as a special assistant to the head coach.

Player development has been a hallmark of Valley’s career, as she played a big role in the success of Sam Thomas, who posted the fourth-most rebounds and 10th-most points for an Arizona freshman in program history. She was also instrumental in the success of Kelsey Plum, who became Washington’s first WBCA All-American in program history after receiving the honor twice in 2015-16 and 2016-17.

Valley was a four-year member of the women’s basketball team at UConn, where she appeared in four Final Fours and won three NCAA Division I National Championships under Geno Auriemma from 2000-04. Appearing in 108 games, she earned a spot on the 2001 BIG EAST All-Star Team as the Huskies posted a 139-8 record during her career. Following her collegiate career, Valley immediately began coaching as a student assistant under Auriemma.

“I couldn’t be more thrilled to join Hawk Nation, and I can’t wait to carry on the winning tradition that has been established by both Jen Rizzotti and Kim McNeill,” said Valley. “Four of the best years of my life were spent here in Connecticut, and it is truly a dream to be coming back home. I can’t wait to get started and look forward to representing the community and the University of Hartford.”

Valley inherits a Hartford team that is coming off three straight winning seasons – including the program’s first 20-plus win campaign since 2013 in 2019 – and consecutive America East Championship appearances. The Hawks, who have won five America East Championships and have made six NCAA Tournament appearances since 2002, returned to the postseason for the first time since 2013 this past season with a WNIT bid.

Valley graduated from UConn with a bachelor’s degree in Human Development and Family Studies.