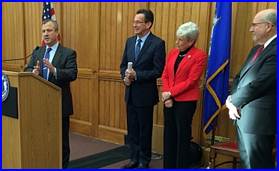 Jonathan Harris (left) has been named Commissioner of the Department of Consumer Protection. Submitted photo

Jonathan Harris (left) has been named Commissioner of the Department of Consumer Protection. Submitted photo

Gov. Dannel P. Malloy today announced that he is naming Jonathan A. Harris of West Hartford to serve as Commissioner of the Department of Consumer Protection.  Harris will succeed Commissioner William M. Rubenstein, who earlier this month announced his intention to retire in January.

Harris has been involved in a number of public service positions throughout his career, including serving as Mayor of West Hartford for three years, as a State Senator serving the 5th Senatorial District in the Connecticut General Assembly for three terms, and also as a member of the West Hartford Town Council.  He also previously served as the state’s Deputy Treasurer under the leadership of State Treasurer Denise L. Nappier.  Most recently, he served as the Executive Director for the Connecticut Democratic Party.

“Jonathan has been involved in public service for many years, both on the local and state levels, first serving on the West Hartford Town Council, and then as mayor, and state senator. During his time in office, he earned the respect of many, particularly when it came to his advocacy as chairman of the state legislature’s public health, human services, and aging committees,” Gov. Malloy said. “I think he will be an excellent fit to attain the agency’s mission of protecting Connecticut consumers and ensuring a fair and regulated marketplace for all.”

“I thank Gov. Malloy for this appointment, and I am honored and touched by the confidence he has placed in me,” Harris said. “This agency is critical to consumers, businesses and all taxpayers.  I intend to use the knowledge and experience I’ve developed in the public and private sectors to build on the successes of the department under the leadership of Commissioner Rubenstein and his excellent staff. Consumer Protection has and will continue to work hard to support the vision and values of the Malloy Administration, to protect consumers, and ensure that businesses have a level playing field.”

Harris received a B.A. from Brandeis University in 1986, and a J.D. from the New York University School of Law in 1990.  He practiced law from 1990 to 2011, during which time he also served for six legislative sessions as Counsel to the House Democrats Office in the Connecticut General Assembly.  In addition, he owned and operated a real estate and economic development firm, Harris Collaborations, from 2007 to 2011.​

The mission of the Department of Consumer Protection is to ensure a fair marketplace, safe products and honest services for all Connecticut consumers in the industries that it oversees, through regulating and monitoring the marketplace, enforcing the law, and educating and empowering consumers.

Nearly every person in Connecticut is positively affected by the work of the Department of Consumer Protection, which has a broad and diverse scope of responsibility. Recently, under Commissioner Rubenstein’s leadership, the department made significant progress toward realizing its mission, including:

Harris will begin serving as Commissioner of the agency on Jan. 7, 2015, the date that Governor Malloy is scheduled to be sworn into his second term in office.

We-Ha.com is the place to go for the latest information about West Hartford – a town that "has it all"! We-Ha.com is part of and proud of our community, and we bring a hyperlocal focus to news and features about the people, schools, businesses, real estate, sports, restaurants, charitable events, arts, and more. Contact us at: [email protected] or [email protected]m.