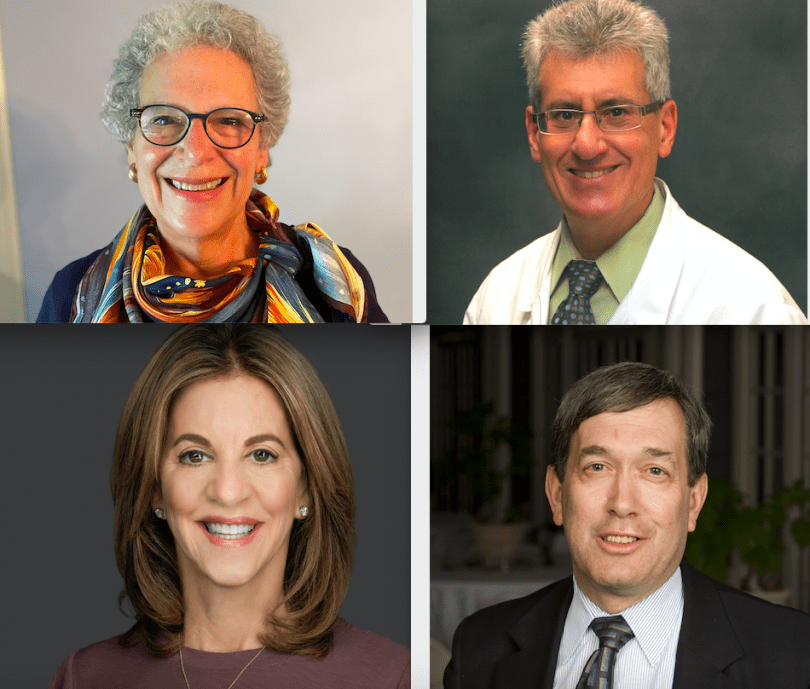 The Jewish Community Foundation of Greater Hartford has announced new members to its Board of Trustees.

Naomi Baline Kleinman of West Hartford is a new Trustee of the Jewish Community Foundation. A seasoned corporate financial executive, Kleinman served in various leadership roles at The Phoenix Company, Inc., including Treasurer and Vice President, Investor Relations, Rating Agencies and Strategic Initiative, and Chief of Staff to the CEO. Prior to The Phoenix Company, Kleinman worked in various positions of increasing responsibility in Investments and Corporate Finance at Connecticut Mutual, including Second Vice President, Corporate Finance, with responsibility for rating advisory and corporate transactions.

A dedicated community volunteer, Kleinman is a member of and has served as Chair of the Endowment Committee of The Emanuel Synagogue. She also served as Treasurer of the Girl Scouts of Connecticut, President of the Charter Oak Cultural Center, and Secretary of the National Investor Relations Institute-Connecticut/Westchester Chapter.

Kleinman and her husband, Joel, are longtime, active members of The Emanuel Synagogue.

Alan E. Solinsky, M.D. of West Hartford is a new Trustee of the Jewish Community Foundation. Dr. Solinsky is the CEO, Managing Partner and Founder of Solinsky EyeCare LLC, a private practice based in West Hartford with eight additional locations throughout Connecticut. He is a Board Certified Ophthalmologist and a Member and Diplomat of the American Academy of Ophthalmology and the National Board of Medical Examiners.

An executive board member of the Connecticut Society of Eye Physicians, Dr. Solinsky was named one of America’s top Ophthalmologists by the Consumer Research Council of America, and named as one of Connecticut’s Top Doctors by Connecticut Magazine.

He engages in volunteer leadership activities including for the Alyn Children’s Hospital Israel Ride Fundraiser in 2019. That same year, Solinsky was the recipient of The Henry M. Zachs Spirit of Judaism award. He also was a former Board Chair at Solomon Schechter Day School, as well as a past board member and Chair of the school’s Fundraising and Scholarship Committees. He also was selected for the Solomon Schechter Ner Tamid Award in 2010. Dr. Solinsky has been an active participant on the two most recent Greater Hartford Jewish Federation men’s mission trips to Israel. He is also a supporter and coach for the West Hartford Little League.

Solinsky and his wife, Susan Solinsky, APRN, are active members of Beth El Temple and the Young Israel of West Hartford. All three of their children attended Solomon Schechter Day School.

Keller co-chaired the joint Federation and Jewish Community Foundation’s Jewish Hartford Rapid Relief and Recovery Fund, which raised close to $1 million for community needs in the wake of COVID-19.

A champion of women’s philanthropy, Keller was co-Chair of Federation’s Voices 2015 Luncheon, “Empowering Women to Use their Collective Voice to Make a Difference,” where she arranged to have award-winning journalist Katie Couric as the keynote speaker. She is also a board member for Jewish Federation of North America (JFNA) and is a member of JFNA’s National Women’s Philanthropy. Keller served on the board of the Aurora Foundation for Women and Girls in Hartford for four years, and she was the co-Chair of Aurora’s Annual Breakfast

A strong supporter of the Greater Hartford community, Keller served a three-year term as a member of the Board at Watkinson School in Hartford. Keller has also volunteered for the program “Read To Grow” by delivering books to newborns at Saint Francis Hospital and she tutored young children at Batchelder School in Hartford, through the Hartford Coalition for Jewish Literacy.

Keller and her husband, Jonathan, are active members of Beth El Synagogue. They have two daughters, Lilly and Sasha.

A former assignment editor for NBC and CBS news affiliates in Washington, D.C., Keller earned her BA in Journalism from The University of Maryland.

David Miller of West Hartford is a Life Trustee of the Jewish Community Foundation. An actuary by trade, Miller worked for 35 years at Travelers, rising to Vice President and Chief Actuary. Over the next 13 years, he specialized in money management and investments for insurance companies, serving both as a Senior Vice President for Citigroup and Managing Director for Conning Asset Management.

An active community leader, Miller served several terms as a Board member for Congregation Beth Israel (CBI), the Jewish Federation of Greater Hartford, and the West Hartford Pension Board. In 2006, Miller joined the Board of Trustees of the Jewish Community Foundation, while also serving as Chair of the Investment Committee. He was appointed as a Vice Chair in his second term and was elevated in 2012 to Board Chair, a position he held for four years. During that time, Miller also co-chaired the Aim Chai Community Endowment Campaign, which raised $40 million.

After completing his term as Board Chair, Miller remained active with the Foundation and in the community, serving on a variety of task forces and committees, including chairing the Foundation’s Governance Committee and remaining on the Investment Committee. He also participated in the joint Foundation/Federation Jewish Cemeteries Task Force, 403(b) Review Panel, Long-Range Planning Committee and Rapid Relief and Recovery Fund Grants Committee. He recently joined the Federation’s Jewish Free Loan Fund Committee and CBI’s LIFE & LEGACY Team.

Miller and his wife, Lauri, are active members of CBI. They have two children and one grandchild.

A Fellow in the Society of Actuaries in the 1970s, Miller earned his MBA in Finance from the University of Hartford. He also earned his BA in Math and his BA in Economics from Kansas University.

About the Jewish Community Foundation of Greater Hartford

The Jewish Community Foundation of Greater Hartford (the Foundation) was founded in 1972 with an initial gift of $50,000. Thanks to the vision and generosity of individuals, families, businesses and organizations, past and present, the Foundation currently has $168 million in assets under its management and stewards grants of approximately $4.6 million annually.

The Foundation unlocks the power of personalized and collective philanthropy to solve problems, strengthen community organizations and provide permanent support for Greater Hartford’s Jewish community. The nonprofit is a proud partner to the Jewish Federation of Greater Hartford and a member of the Connecticut Council for Philanthropy.