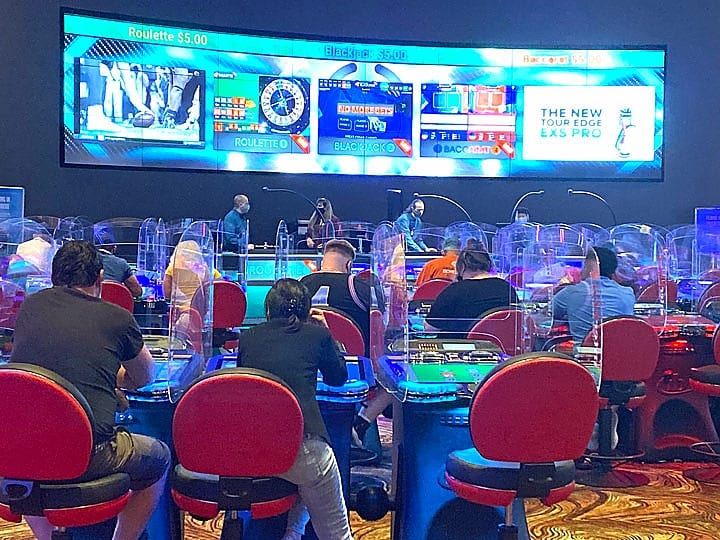 Sports betting is likely to be considered when the General Assembly’s legislative session begins, but under the deal announced Monday, Foxwoods and DraftKings will launch daily fantasy sports offerings like online promotions and contests starting on Dec. 13.

Betting that Connecticut will legalize sports wagering in the coming year, Foxwoods Resort Casino announced a partnership with DraftKings Monday to offer the new form of online gambling if it becomes available in the state.

Under the deal, DraftKings, a popular sports betting operator based out of Massachusetts, will act as a partner and technology platform for sports betting through Foxwoods, which is operated by the Mashantucket Pequot Tribe.

The only problem is, at the moment, sports betting is not legal in Connecticut.

When the pandemic cut the General Assembly’s legislative session short this year, sports betting was one of the issues lawmakers left on the table. Gov. Ned Lamont had backed a concept which would have allowed sports betting but did not give the Mashantucket Pequot and Mohegan Tribes exclusive rights over the betting. The tribes maintain that their compact with the state giving them exclusive rights to casino gaming extends to all potential sports betting revenue.

Mashantucket Pequot Nation Tribal Chairman Rodney Butler said he believes the two sides would have reached an agreement this year if it were not for the COVID-19 pandemic. He said Monday that he’s confident legislation will make it over the finish line in 2021, in part due to the state’s projected financial deficits.

“We need to scrape and find every ounce of revenue that we possibly can,” Butler said. He said it makes sense to expand on an industry that’s partnered with the state for 30 years. “Or what are you going to do? Increase taxes? Implement tolls? Increase the taxes on plastic bags? This is a real revenue option that helps the state when the state needs it most.”

The tribe expects sports betting to generate around $175 million in new revenue during its first five years, according to a press release it issued Monday. Under the existing compact, the state receives 25% of the slot revenue collected by the two tribes.

Asked about sports betting during a news conference Monday, Lamont said his administration would continue to negotiate with the tribes. He said he expected to arrive at legislation in the next session that would legalize sports betting but he was reluctant to say whether he would endorse a proposal giving the tribes exclusive rights.

“We’ve been talking about this for close to a decade in this state and frankly the whole world is moving virtual and that includes the gaming industry. I think Connecticut ought to participate and ought to be led by the tribes,” the governor said.

Butler acknowledged that the optics of the announcement – just a month before the start of the legislative session – were well timed. But he said the announcement was not driven by a desire for negotiating leverage. The Mashantuckets have been looking for a sports betting partner for some time, he said.

“We’ve been vetting partners for the better part of the last two-and-a-half to three years. The timing of this isn’t in relation to this coming legislative session,” he said. “The reality is, we were going to pick a technology partner either way because at some point every state in this country is going to have sports betting and we want to be prepared for it.”

The deal positions Foxwoods alongside DraftKings, a popular brand that offers mobile sports betting in 10 other states. Under the deal announced Monday, Foxwoods and DraftKings will launch daily fantasy sports offerings like online promotions and contests starting on Dec. 13.

In the press release, Matt Kalish, co-founder and president of DraftKings North America called the partnership with the Mashantuckets a “landmark deal.”

“The national expansion of regulated sports betting is among our top strategic priorities,” he said.