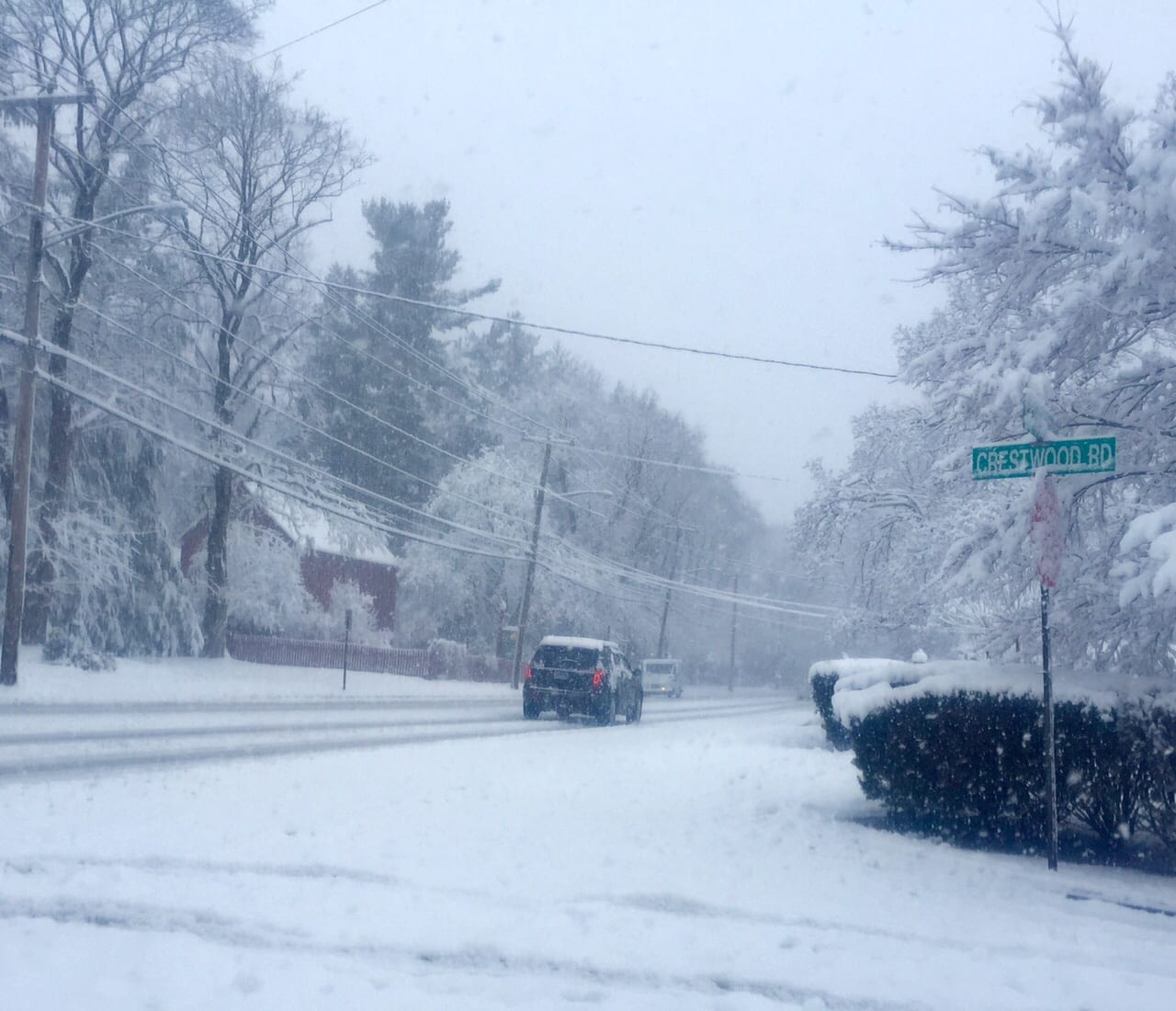 [Updated, 12 p.m.] West Hartford is now under a Winter Storm warning, and as of noon approximately 7 inches of snow have fallen. 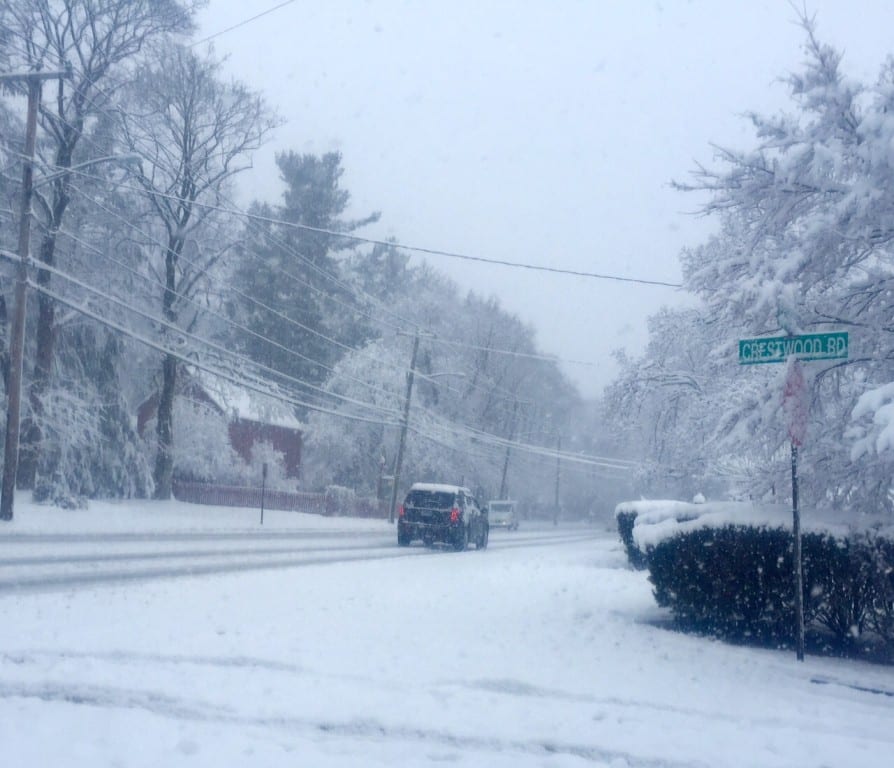 As of noon the heaviest bands of snow appear to have moved east of the West Hartford area, where approximately 7 inches of snow have already fallen. The National Weather Service replaced the Winter Weather Advisory with a Winter Storm Warning when it appeared that the area would receive more than 6 inches of snow.

Director of Public Works John Phillips said he made the decision around 10:30 a.m. to call in contractors after several hours of very heavy snow in West Hartford made it difficult for town crews to keep up with the plowing.

Complicating their efforts to clear West Hartford’s roads are wires that are now snow-laden, and hanging so low that it is impossible for plow trucks to get down certain roads. Farmington Avenue, west of the Center, is one of those areas that trucks can’t currently plow, although Phillips said it was plowed earlier in the day. A clearance of 13 feet is needed for the trucks to get through, he said.

“It’s still a very wet snow which is greasy,” Phillips said. The nature of the snow is making it challenging for drivers to navigate slopes, hills, and turns, he said.

In addition to dragging down wires, the snow is wreaking havoc with tree limbs. “Tree limbs have been falling into the street, mostly little ones,” said Phillips, but crews have been dealing with multiple requests to remove them.

“Roads are passable if you have patience,” Phillips said. “Anticipate your turns because that’s where you’re really finding it greasy,” he said.

A fair amount of traffic is out and about, and there have been some accidents, Phillips.

Crews have been concentrating on main and arterial roads, where most of the traffic has been, but Phillips anticipates shifting into clean-up mode and addressing the neighborhood streets once the snow starts to wind down. 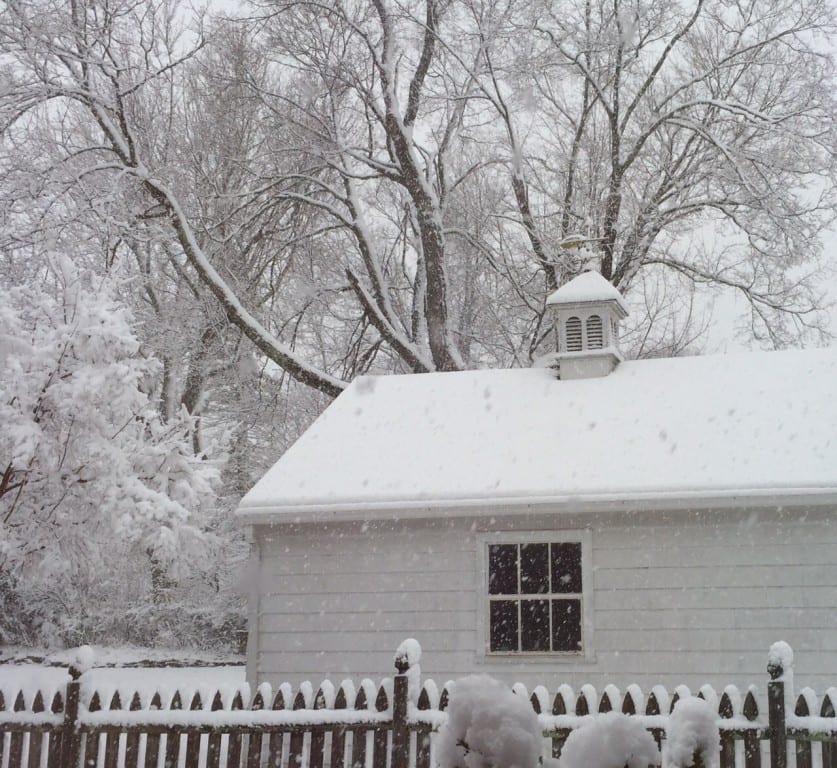 Friday dawned snowy in West Hartford, with schools closed and a parking ban in effect until further notice.

Thursday’s temperatures were mild, and many people were skeptical about the possibility of snow on Friday – let alone snow that would stick to the ground and the roads. But by 9:30 a.m., about 3 inches of wet snow was covering the grass and sticking to the trees, creating a winter wonderland scene.

West Hartford Public Schools announced that they would be closed – the first snow day of the academic year.

A parking ban went into effect before 7:30 a.m., and residents are not permitted to park on any streets in town. Parking is available in lots and garages.

Director of Public Works John Phillips said that road conditions in West Hartford “vary,” but with snow falling at a rate of 1 inch per hour, and expected to continue at that rate, it may be difficult for plows to keep up.

All Department of Public Works plows are out on the roads, and Phillips said he does not anticipate needing to call in contractors.

“It’s not icy yet because our treatments are working well, but it is very slushy,” Phillips said just after 8:30 a.m. “The slush is ‘greasy,'” he said.

He said that roads are passable, and drivers should be able to navigate if they take their time and drive at low speed. However, lower-profile vehicles that do not have all wheel drive may have trouble pushing through the slush.

If the snow ends by lunchtime or early afternoon, as predicted, Phillips said the afternoon commute should not be a problem. “The roads should be in great shape for the evening rush hour,” he said.

The National Weather Service is predicting snow to end in the area by 2 p.m., with up to 7 inches of accumulation possible. A Winter Weather Advisory is in effect until 1 p.m. Saturday should be mostly sunny with a high of 41 degrees, so melting is expected.

Residents should also be aware of the town’s snow removal policy, and be sure to remove snow from sidewalks, including curb cuts, within 12 hours of the storm’s end. Snow should not be pushed or plowed back into cleared streets. For complete details, click here.

“It’s a pretty snow,” said Phillips, and we agree! If you are out and about and get any good photos, send them to Ronni Newton at [email protected], and we will publish a gallery of snow scenes.

Check back for updates, too.