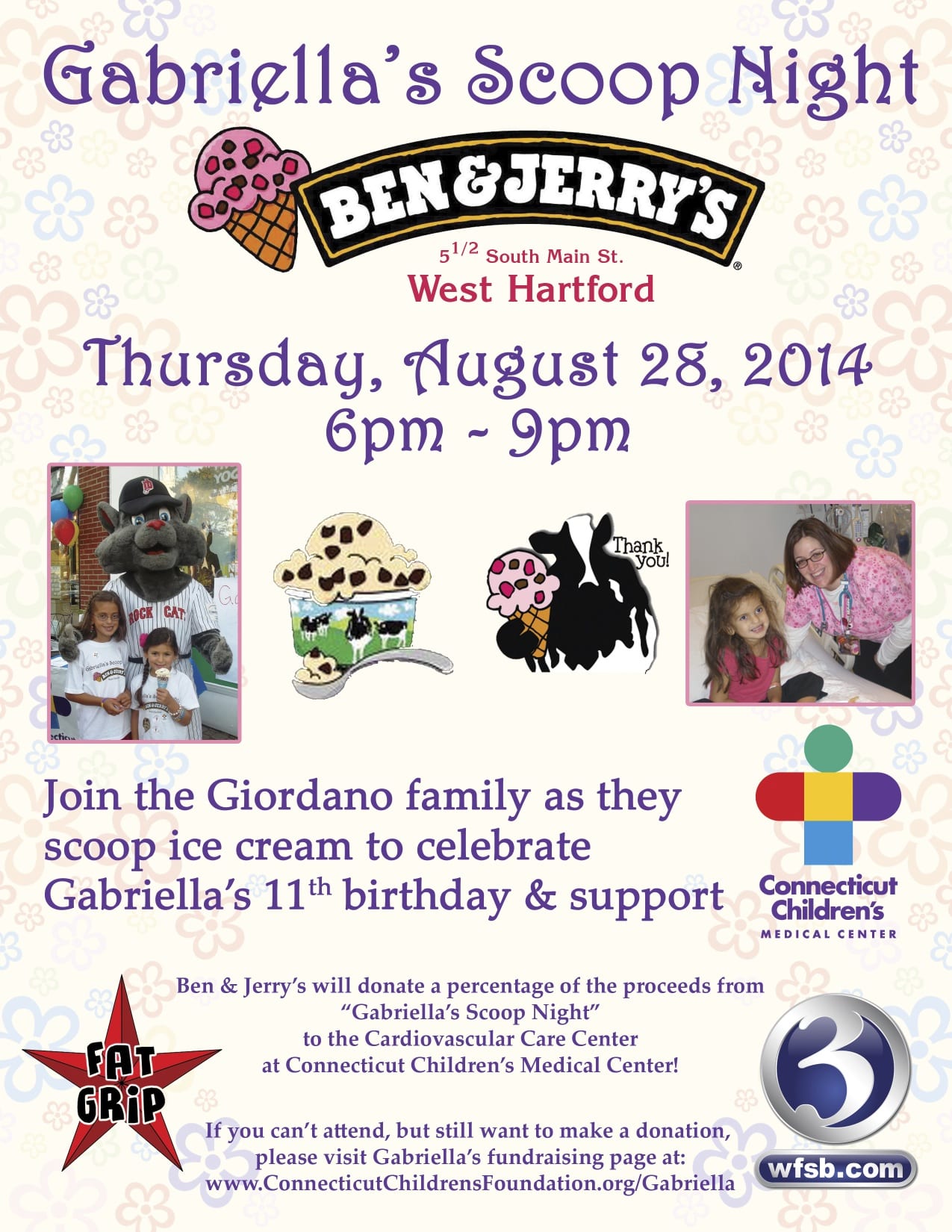 The annual fundraiser to benefit Connecticut Children’s Medical Center will be held at the Ben & Jerry’s on South Main St. in West Hartford from 6 – 9 p.m. on Thursday, August 28, 2014.

Every August 28 Gabriella Giordano has a birthday, and every year since 2009 she has celebrated that birthday with Gabriella’s Scoop Night. That was the year the then 5-year-old had open heart surgery, which ensured that she would continue having birthdays.

As Gabriella – who is celebrating her 11th birthday this year – has grown, so has the event. “The first year we raised about $1,600 and since then it’s grown and grown … both in funds raised and in community involvement. Gabriella’s goal this year is $6,000. We have raised almost $15,000 to date for Connecticut Children’s Medical Center,” said Gabriella’s mom, Adria Giordano.

Adria Giordano said that funds raised this year will be earmarked for the new state-of-the-art Cardiovascular Care Center that the hospital will be developing.

In addition to ice cream, there will be lively dancing music provided by FatGrip, door prizes, face painting and other children’s activities, and special guest Rocky from the New Britain RockCats. Adria Giordano is very thankful for the support of media sponsor WFSB Channel 3 as well as other local businesses including Blo Hair Salon, The Claypen, Mr. Trophy, and presenting sponsor (that was directly involved with Gabriella’s open heart surgery) Integrated Anesthesia Associates.

This year there’s another non-profit being supported by the event – Gabriella Giordano’s own charitable organization, GG’s Hearts. Gabriella decided that she wanted to send supportive teddy bear pillows (called “splints”) to children in the hospital having heart surgery, and has already donated 70 of them. To watch Gabriella being interviewed about her non-profit on WFSB’s Better Connecticut, click here.

“I’m so proud of Gabriella for who she is and the amazing and kind heart she has. She had dealt with a lot of serious medical issues in her short life, but you wouldn’t know it by talking with her. She has the biggest heart and always wants to help others,” Adria Giordano said.

“We are so very grateful to our family and friends who come out in support of Gabriella’s Scoop Night or who can’t be with attend the event and make an online donation … and to our wonderful West Hartford community who have wrapped themselves around us and Gabriella. We absolutely love living here and feel very blessed to raise our girls in such a wonderful and beautiful town!” Adria Giordano said.
If you are unable to attend but still want to donate, visit www.connecticutchildrensfoundation.org/Gabriella