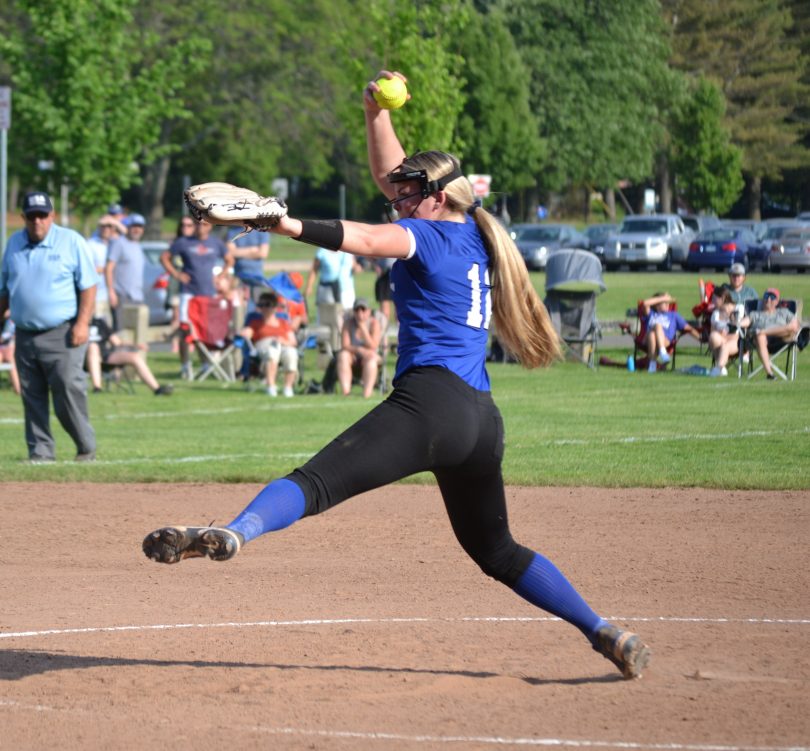 Hall hosted New Canaan in West Hartford on Tuesday in the first round of the CIAC Class LL softball tournament. 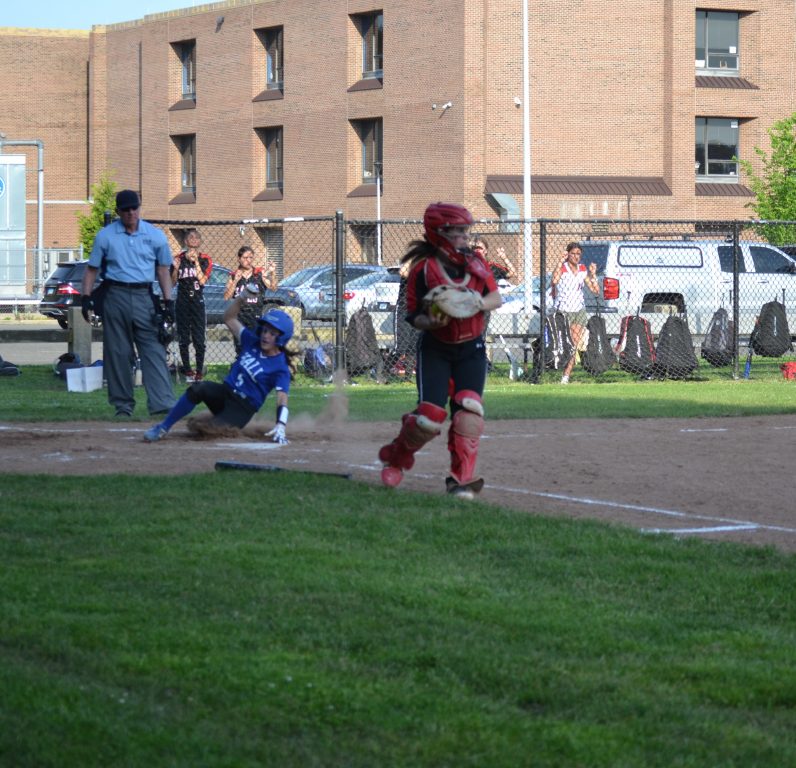 She was just named to the All-State Team and selected by the Connecticut High School Coaches Association as the pitcher of the year. Tuesday, she opened Hall’s trip in the Connecticut Interscholastic Athletic Conference (CIAC) Class LL state softball tournament by twirling a no-hitter, with 18 strikeouts in a 6-0 shutout.

Garner-MacKinnon came within two outs of a perfect game when New Canaan got its only base runner of the game on a one-out error.

“I felt pretty good,” said the Duke University-bound pitcher. “I was a little apprehensive about the heat, but everyone had to play in it.” 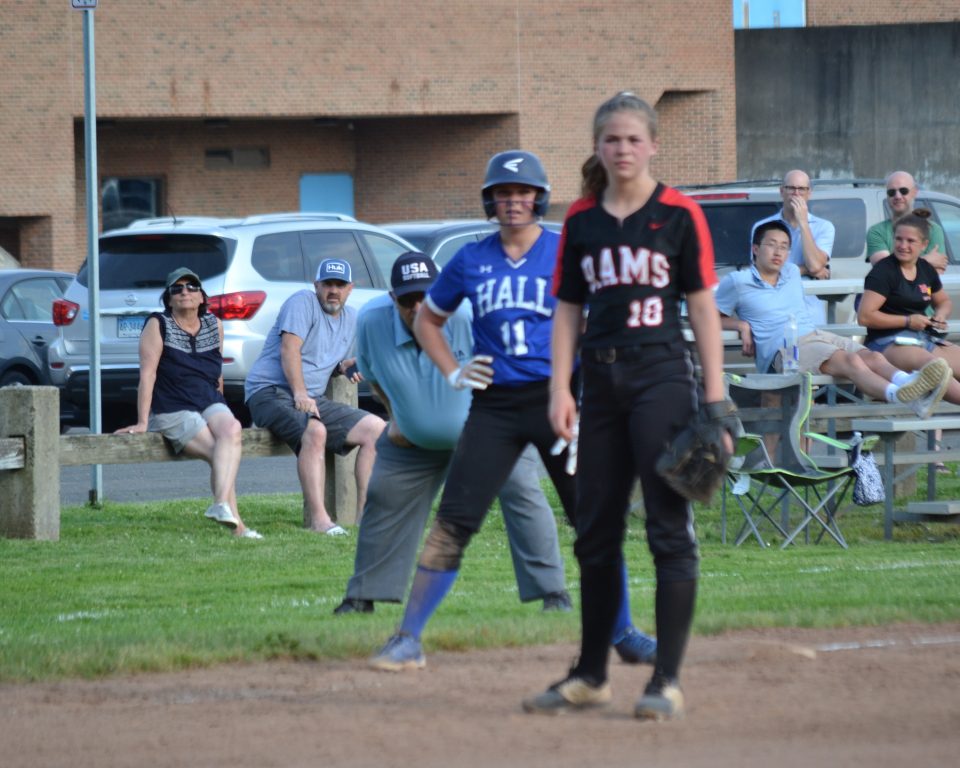 Hall wasted no time in getting on the scoreboard against the Rams. Piper Garner-MacKinnon, the pitcher’s freshman sister, dropped in a bloop single and would later come around to score on Tessa Hache’s sac fly .

The heat was also coming from both starting pitchers as Sophie Garner-MacKinnon and New Canaan’s Ava Biasotti were bringing their A-game with good fastballs and lots of movement. Hall held the 1-0 lead into the bottom of the third when they broke through and put it away.

Piper Garner-MacKinnon led off with a single and then stole second and third. Maddie Peterson would bring her in with a single to right. After a fielder’s choice and a strikeout, Biasotti looked like she might get out of the inning with just one run against, but Hache delivered an RBI single up the middle and advanced on the throw home.

Jordan Frankel then drove a double down the left field line to score Hache and make it a 4-0 game before Biasotti would end things with a strikeout. 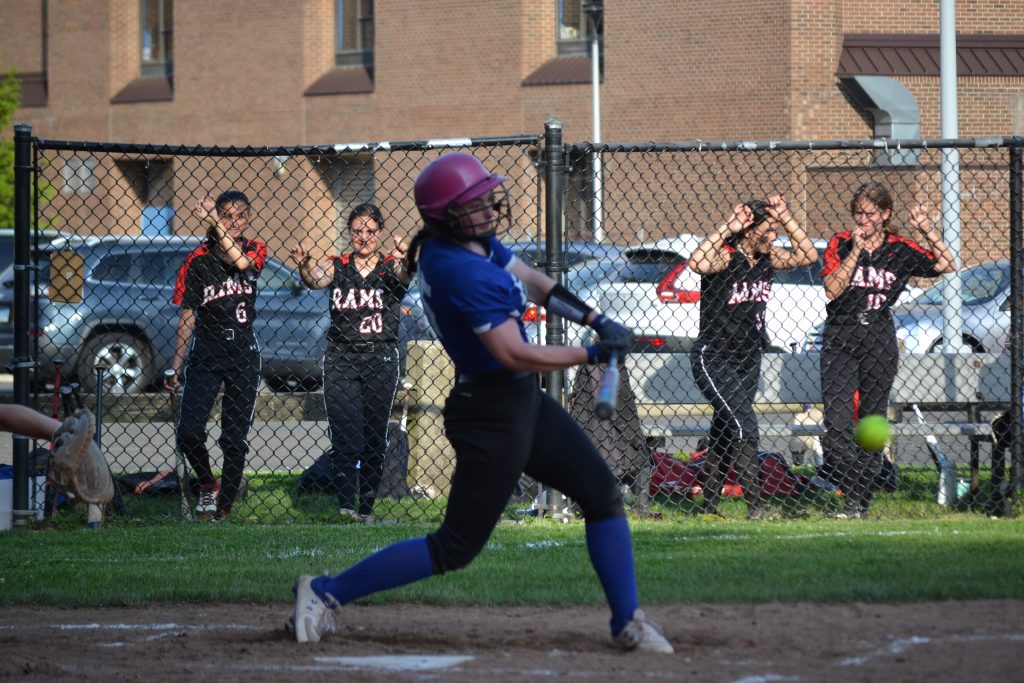 “Every person on this team contributed today,” said  the Warriors head coach Becca Lewis. “At the plate, in the field, this was a total team win.”

After Garner-MacKinnon picked up her eighth and ninth strikeouts of the game in the top of the fourth, her teammates put together another mini rally to pick up two more runs. Jackie Hamad led off with a double to left center. Genevieve Nelson then delivered her to third with a well-placed sacrifice bunt.

Piper Garner-MacKinnon followed with a walk and then stole second before Peterson flied out. On the play, Hamad raced home and when New Canaan cut off the throw and tried to catch Garner-MacKinnon advancing to third, the throw went our of play, and she trotted home with the sixth run for Hall.

Knowing they would most likely have to turn around and play again on Wednesday if they won, Lewis had a decision to make. Keep her ace – with her perfect game – on the mound, or give her arm a break and bring in another pitcher with the six-run lead. 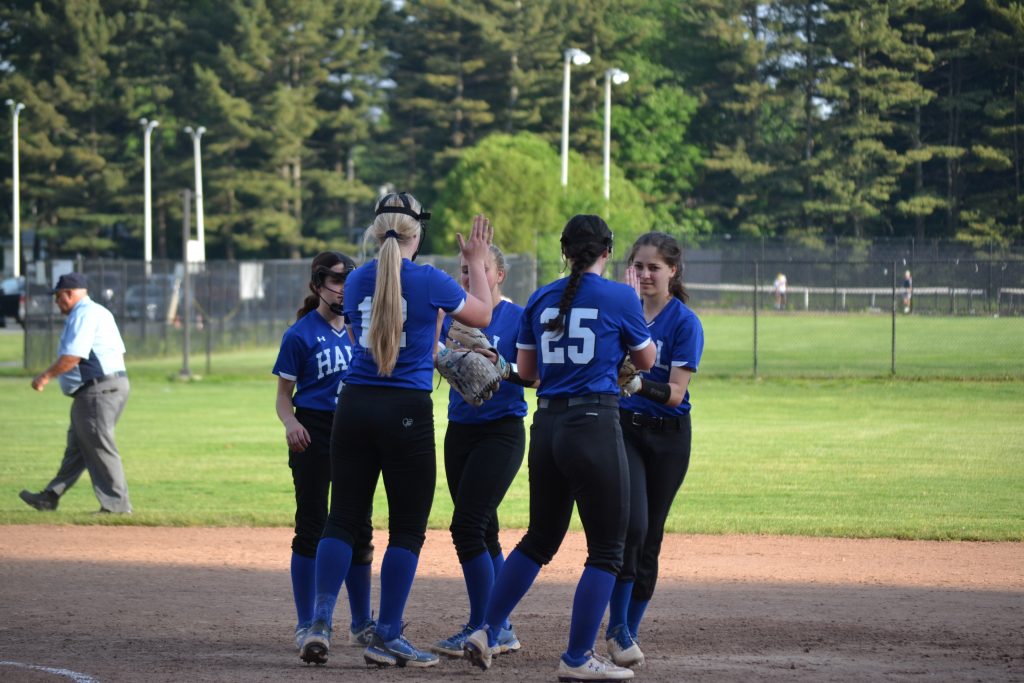 High 5’s for the hall infielders before the start of the inning. Hall vs. New Canaan. Class LL first round softball tournament. May 31, 2022. Photo credit: Paul Palmer

“There was no discussion,” said the coach. Garner-MacKinnon was sent back out for the fifth and she rewarded her coach’s confidence by striking out the side.

“Sophie was dominant today,” Lewis said. “My rise ball was my best pitch,” added Garner-MacKinnon. “I was able to throw it on different levels today.”

She struck out the side again in the top of the sixth inning and Biasotti matched her in the bottom half of the inning. It came down to three more outs for Garner-MacKinnon and her teammates, and they would begin the post-season with a perfect game – no hits, no runs, no walks, and no errors.

Faith Hibbert struck out as the first  batter for the Rams. Senior Christina Sinatra followed with a blistering shot toward third that got through. It was officially scored an error and not a hit – and the perfect game was gone, but the no-hitter was still intact. Garner-MacKinnon and catcher Stephanie Markie did the rest as they were in sync to close out the game with two more strikeouts. 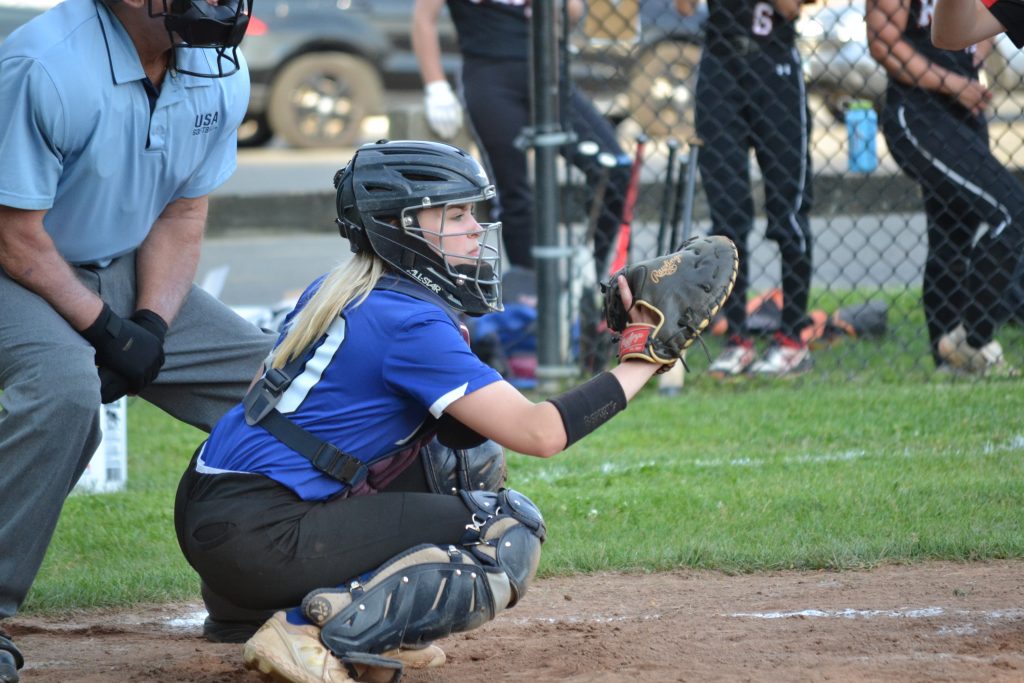 There will be no time to rest or celebrate for the sixth-seeded Warriors (17-3). They are back on the home field, hosting No. 11 Naugatuck on Wednesday at 4 p.m.

“We are aware how to turn it around 24 hours later,” Lewis said. “We worked hard to get these first two games at home.” 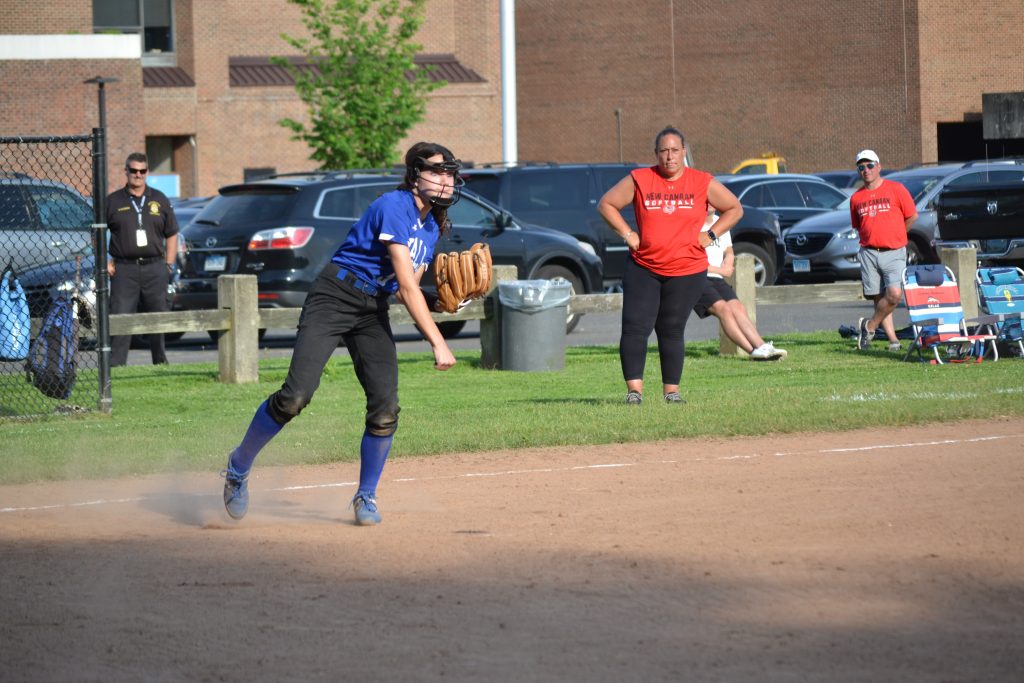 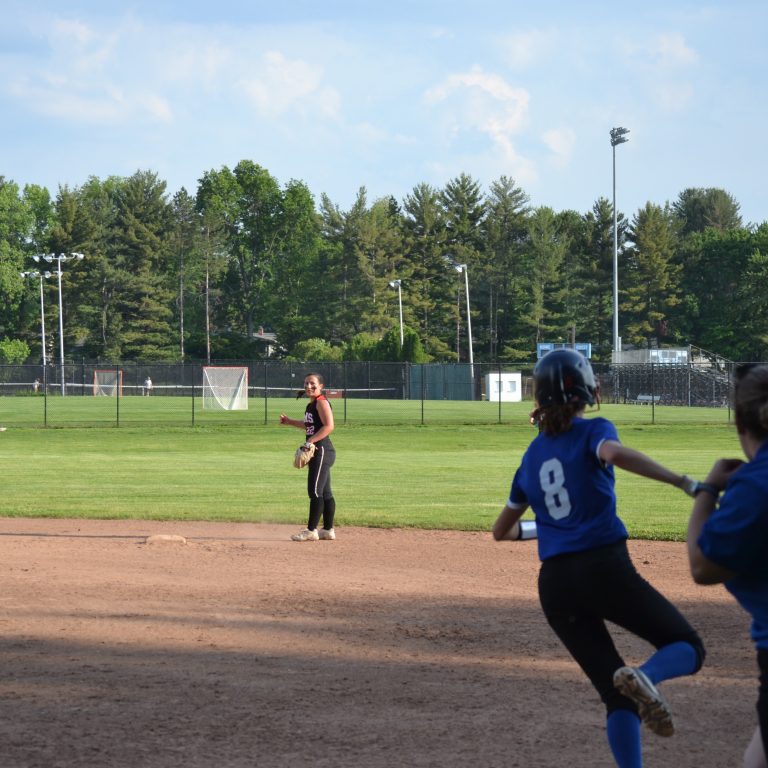