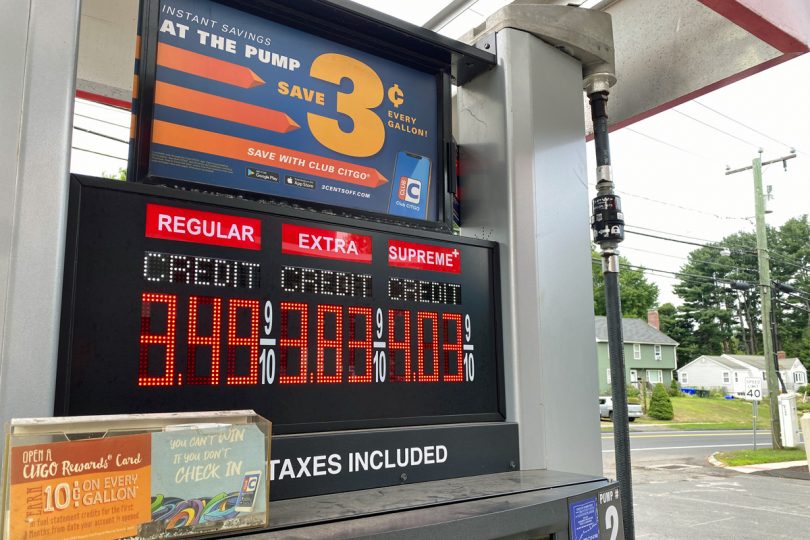 The price of gasoline has continued to drop in Connecticut and across the nation this week, including at the CITGO Atlantis Fresh Market station on Main Street in Rocky Hill. The $3.49 price per gallon of regular gasoline was the lowest price offered in Connecticut on Wednesday, Aug. 17, 2022, according to user-reported prices on the GasBuddy mobile app. Photo credit: Doug Hardy, CTNewsJunkie

The state average was down 42 cents over the past month, AAA reported.

The price of gasoline continued its downward plunge this week as the crude oil market stabilized and demand for gasoline – according to a survey conducted by AAA – remained low. The average price per gallon of regular gasoline in Connecticut was $4.09 on Wednesday, down 8 cents over the previous week and 89 cents from its peak of $4.98 on June 14.

The national average also continued its fall, according to AAA, dropping 10 cents over the past week to $3.94 on Wednesday, down from its peak of $5.01 on June 14. Wednesday’s national average was 59 cents less than it was a month ago, but was still 76 cents higher than a year ago. Connecticut’s average on Wednesday was 91 cents higher than a year ago, but the state’s 25-cent tax on each gallon is currently suspended to help consumers.