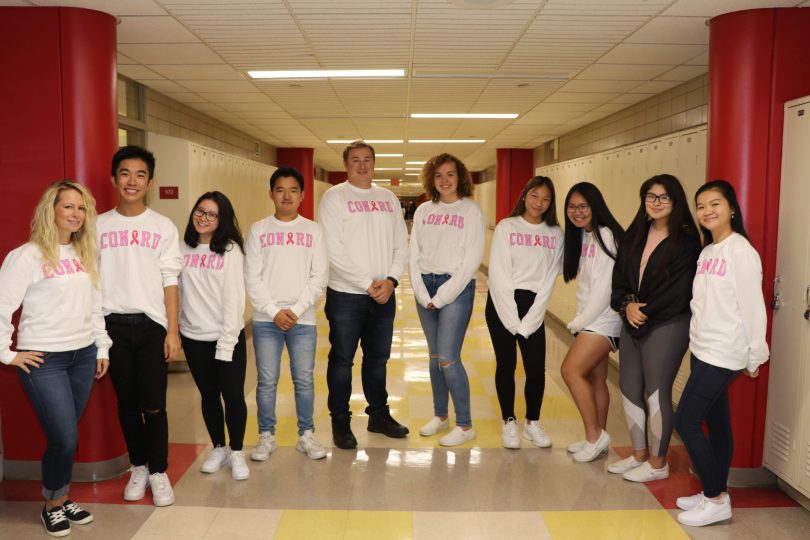 The business clubs at West Hartford’s Conard and Hall high schools have been transformed into DECA clubs, adding many more opportunities and experiences for students. 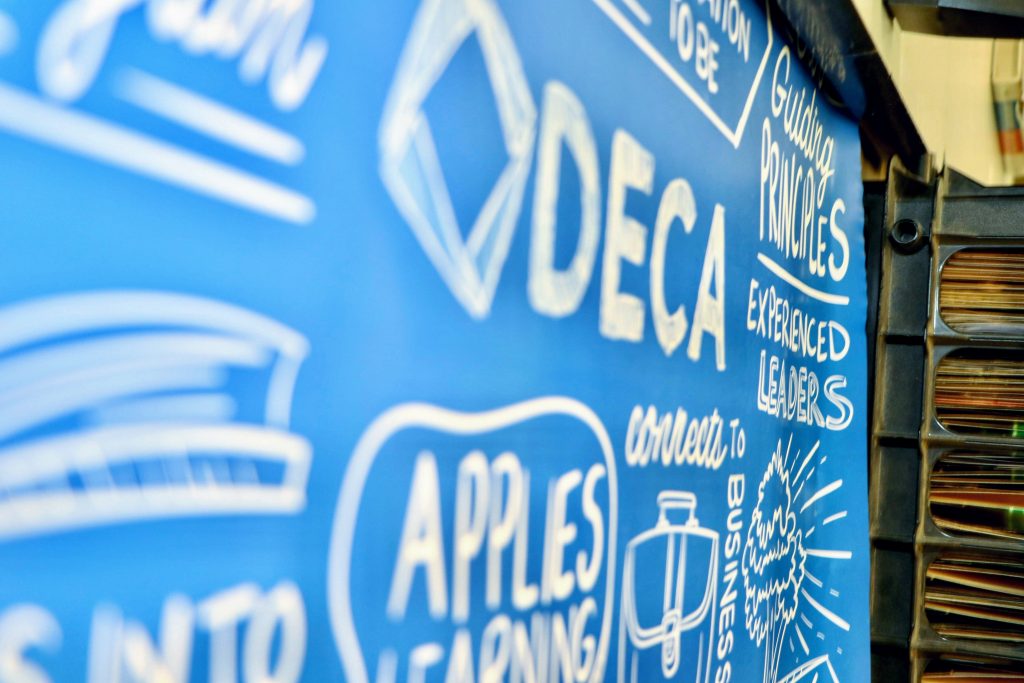 Students at West Hartford’s Conard and Hall high schools are already getting a great academic education – clearly evidenced by the accolades that West Hartford Public Schools continuously receive and high rankings from national organizations – but a group of students are also taking advantage of the opportunity now being offered to get some real-world business experience. 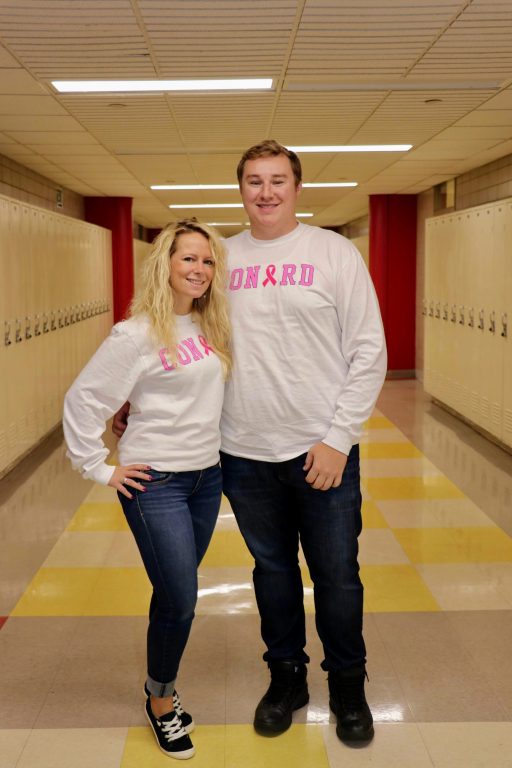 Holly Ruiz is in her fifth year teaching at Conard, and previously taught in Bethel. Before becoming a teacher, she was an accounting professional for 15 years.

She immediately became the advisor to Conard’s business club, and said last year Conard Principal Julio Duarte approached her and said the district was looking to transform the business club as part of a national organization.

“From top down, [Superintendent] Tom Moore wanted an area within business to be involved with a national organization,” Ruiz said. The “Career and Technical Education” (CTE) department already had the technology teachers involved with and and participating in the national TSA (Technology Student Association) organization, and the district wanted to do something similar on the business side.

Andrew Rosa was hired this year to also teach business classes at Conard, and together the two jumped in and have jump-started what has already become a very active 34-member DECA club at Conard.

DECA was formerly an acronym for the “Distributive Education Clubs of America” but the name now stands on its own. The high school division of the nonprofit organization has more than 215,000 members worldwide according to its website, and “prepares emerging leaders and entrepreneurs in marking, finance, hospitality and management in high schools and colleges around the globe.”

“The CTE Department is ecstatic with the formation of two DECA charters at Conard and Hall high schools,” said Cohen. “With almost 75 years of history, DECA has been preparing students for their futures through community-centered projects, competitions, and real-world finance, marketing, and business experiences.

“DECA is the next progression for West Hartford Public Schools students interested in exploring business career pathways,” he said, noting that both chapters have already incorporated their passion and school spirit into fundraising events.

“This move fits within a departmental vision to add depth to the array of experiences – both curricular and extracurricular – available to students with an interest in or affinity for marketing, finance, hospitality, or business management. As we review and refine our programming under different career pathways, we saw the opportunity to enrich our business club through DECA in order to provide a greater range of experiences, a diversity of rigorous challenges (specifically defined DECA projects), and increased student networking and scholarship opportunities.”

Many of Conard’s former business club activities are continuing under DECA, such as designing and selling shirts sold in the school store for Conard’s annual “Pink Out” day in October, and the school’s highly-anticipated Dodge Ball tournament held just before Thanksgiving.

The transition from a high school business club to the international DECA framework was relatively easy, Ruiz said, because the Conard club’s focus already “was about giving back, and making sure you’re helping others,” with a strong teamwork component.

Ruiz is also responsible for running the Conard school store – and while that’s not officially part of DECA, she has brought some of the store’s operations into the club’s programming, and has a few DECA members running the store when it’s open but she is unable to do it, for example during teacher conference time.

The Conard students already have their sights set on the national landscape.

To attend the conference, DECA clubs either need to place in competitions, or complete specific campaigns. By registering more than 20 students and more than 20 professional members, Conard has already met the criteria for earning two seats at the conference.

Johnny Hoang is the club’s president, and Ruiz said he has been a great driving force in attracting members. JoJo Rai has also played a major role, she said.

There are paths to attending ICDC through community service and promotional campaigns, and Ruiz is hopeful that the Conard club will earn at least four seats. She and Rosa will select the students to attend.

Some students may also look to qualify for ICDC through competitions. “It really puts them out of their comfort zone … I’m really proud of them for figuring it out,” Ruiz said. The available competitions include creating a written response to a problem scenario, role-playing, exams such as in personal finance, and success in a virtual business game. The virtual games include challenges in running virtual sports, hospitality, and retail businesses, as well as aspects of accounting and financial literacy.

A senior DECA member is competing in the Financial Literacy project at the state competition on March 4 in the hopes of earning a spot at the ICDC, Ruiz said. The student is hoping to have members of the public complete the following brief survey (Support for Financial Literacy Education: 2019-2020 Anonymous Survey), and will use the results to complete the written portion of the project which is due Jan. 29.

“I joined because I have a general interest in marketing and business,” said Conard junior Hunter Marotto. “I generally like to compete and hopefully win. Last year the business club didn’t compete as much as we can this year. It’s already been worth the efforts as I’ve gained new friends, collaborated between Hall, and worked for causes like Pink Out, and have met a lot of kids I wouldn’t have in another club.”

He said Rosa, who is one of his teachers, really hyped up DECA at the start of the school year.

“I wish I had had DECA when I was in high school,” said Rosa, who is in his mid-20s and graduated from Holy Cross in Waterbury. There was a personal finance class, but it was part of the math department, he said.
Rosa now teaches the sports and entertainment marketing class at Conard. He also teaches entrepreneurship: intro to business – a “very hands-on project-based class that brings in real world examples,” and will be teaching financial literacy as well.

The sports and entertainment marketing students – not all of whom started out in DECA – are teaming up with the club to attend a conference at Disneyworld/Universal Studios in February, Rosa said. The trip will offer an opportunity to network with business professionals. There are already a handful of students signed up to attend, and he anticipates 10-11 in all.

Marotto said he is hoping to attend both the Orlando and Nashville trips.

Ruiz, who was the sole advisor to the business club and previously the only full-time teacher of the business classes at Conard, is very happy to have Rosa on board. “I like having his fresh ideas,” she said.

“Julio has been really happy with the amount of time we have invested in this,” Ruiz said of Conard’s principal.

“I was always proud of the work our business club did,” Duarte said. “But I knew we could really have the opportunity to get national exposure,” which will also increase the opportunities to network and make connections.

The students are taking it very seriously, and Ruiz and Rosa have been doing an amazing job as advisors, Duarte said. “They’re not just doing activities, but are doing things that are meaningful,” he added.

The students have embraced the more formal piece of being part of DECA, and the competitions are great motivators, Duarte said.

Conard’s DECA club is more active, but Hall’s club is already seeing success as well. Carlie Dailey and Maryanne Taft are advisors, and Ruiz said she is also providing the Hall club with assistance and resources.

A WeHaHA comedy night on Dec. 7 was a combined fundraiser for both the Conard and Hall clubs.

Being involved in DECA, learning business concepts, “will really prepare them for the future,” Ruiz said, whether they plan to study business in college, plan to study something else, or even if they go straight to work after high school.

According to Vicinus, “[Cohen] has reported a lot of energy around the shift to DECA with students engaged in developing podcasts related to the insurance industry and creating a small businesss,” as well as actively fundraising to attend conferences.

“I like how everything we do or talk about can directly help or be of use in our future,” Marotto said.

“If you’re thinking of doing something in business in college it’s great to test it out,” Duarte said. “Even if you’re not college bound, these are great life lessons. Kids who love auto tech may want to one day own their own garage.”

“We are very excited to see what these talented students can achieve in this first year with the program,” said Cohen.

DECA has about 25 professional members, but would welcome more. Anyone interested should contact Ruiz at [email protected].

Editor’s Note: A version of this story originally appeared in the January 2020 issue of West Hartford LIFE 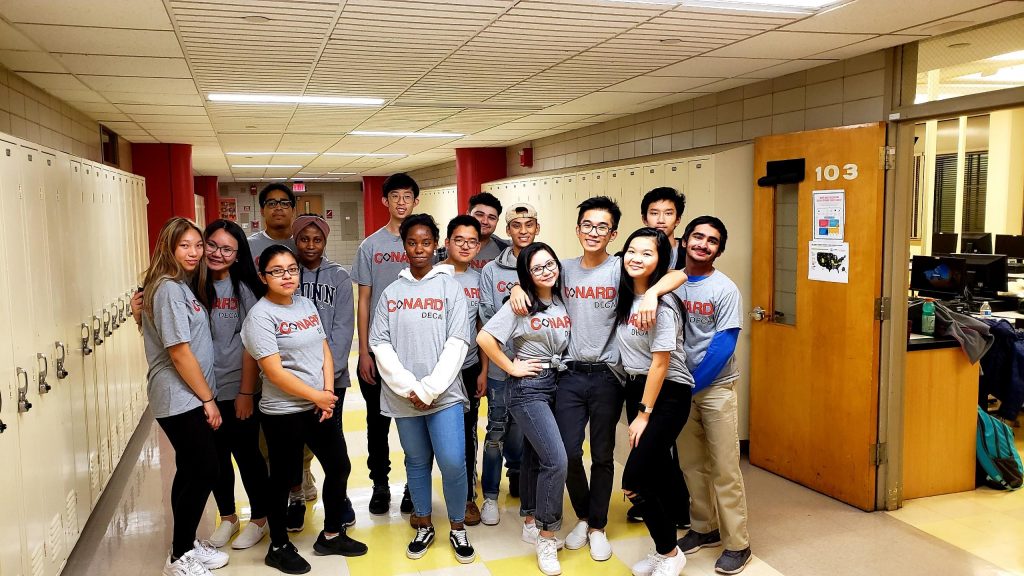 Some members of DECA gathered at Conard after the Dodge Ball fundraiser. Johnny Hoang (fourth from right) is club president. Rachel Son (fifth from right) designed the DECA shirts the students are wearing based on the vision of club advisor Holly Ruiz. (Courtesy of Holly Ruiz) 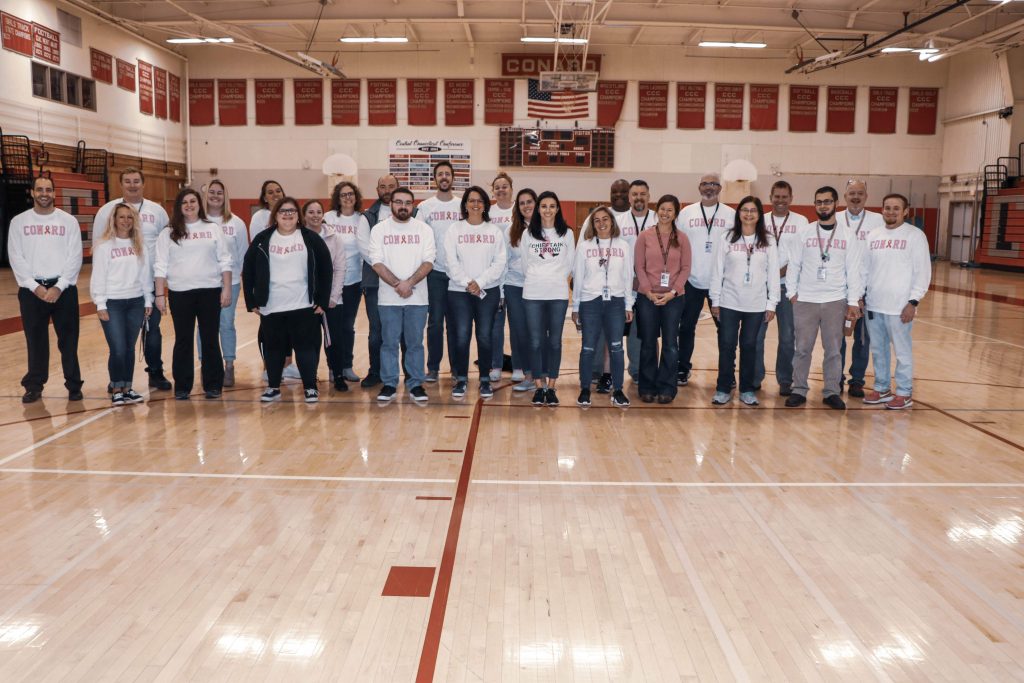 A group of teachers wear the pink out shirts designed and sold by DECA for Pink Out day Oct. 25. Photo credit: Hunter Marotto