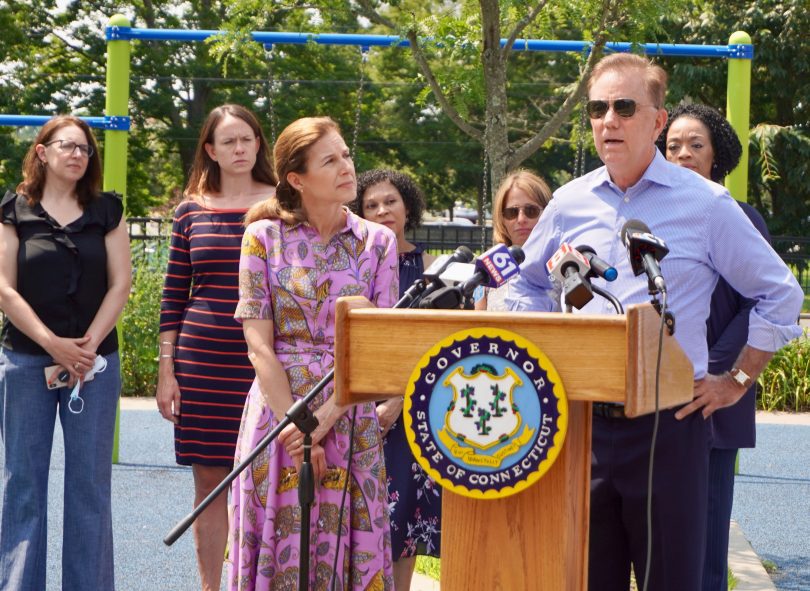 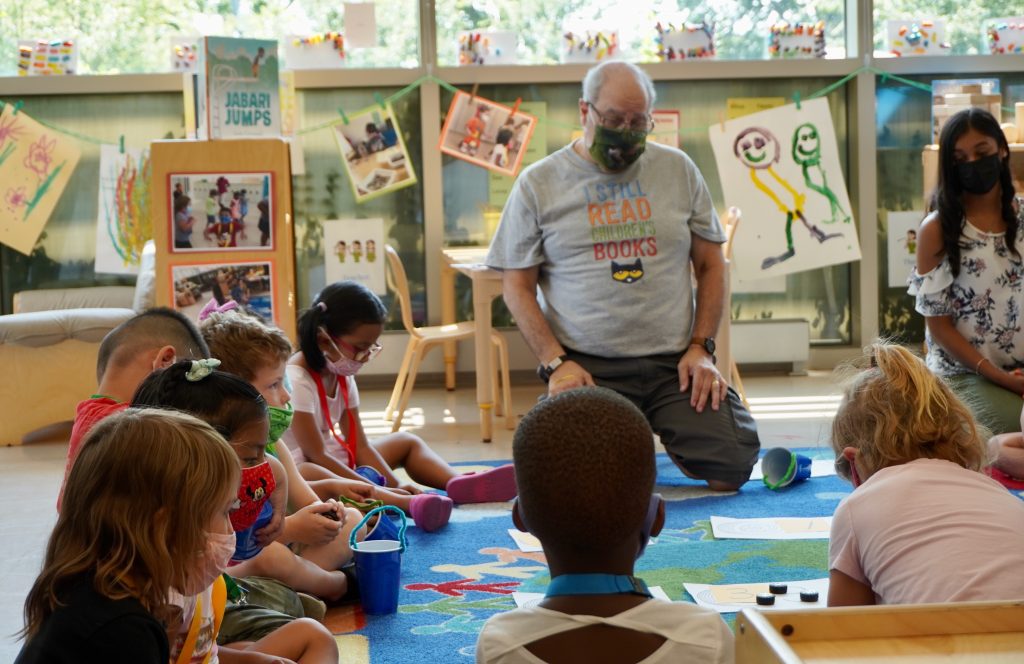 Children who will be attending kindergarten participate in ‘123 Read with Me’ at the Family Resource Center at Charter Oak International Academy. Photo credit: Ronni Newton

More than one-third of the 30 children enrolled in the “123 Read with Me” at the Family Resource Center at Charter Oak International Academy in West Hartford did not attend school in person last year, and others attended only briefly, but state officials and early childhood education advocates are optimistic that the free program, which focuses on literacy and numeracy skills as well as socialization, will prepare them for a positive school experience in the fall.

Gov. Ned Lamont stood on the bouncy playground – which he said felt like a trampoline – outside the Family Resource Center at the five-year-old school building in West Hartford, and along with other officials touted the 123 Read with Me program as a great example of the use of American Rescue Plan Act funds.

West Hartford’s Family Resource Center, led by Deborah Zipkin, has been in operation as a program of The Bridge Family Center for many years, but this year received $45,600 in funding, plus $2,750 to support a summer intern.

“This is not a season of lost reading,” Lamont said. “It’s a season to hit the ground running.”

Getting federal dollars into the hands of those who know how to use them, through state and local collaborations, has been a priority, said Lamont, who added his thanks to the state’s Congressional delegation for helping secure the American Rescue Plan Act funds.

There’s still time to sign up through Summer CT to participate in the summer learning camps, which are not just for preschoolers or incoming kindergartners, but for school-age kids of all ages. “It’s fun, it’s socializing, and it’s ready to go for school in just seven or eight weeks,” the governor said.

“This is really an opportunity for kids to learn, to get prepared for the fall, to catch up, and to have fun,” Lt. Gov. Susan Bysiewicz said.

The free programs also provide parents with safe and trustworthy care for their children during at least a portion of the day, allowing them the opportunity to get back to work.

The West Hartford Family Resource Center program is a great example of “how we are putting these transformational dollars to work,” the lieutenant governor said.

Bysiewicz added that the American Rescue Plan Act money didn’t arrive until the very end of the school year. “Programs like this one wouldn’t have had the funding,” she said, if not for the efforts of Commissioner of Early Childhood Education Beth Bye, who quickly mobilized the department to launch programs throughout the state modeled on what Zipkin has already been doing in West Hartford. 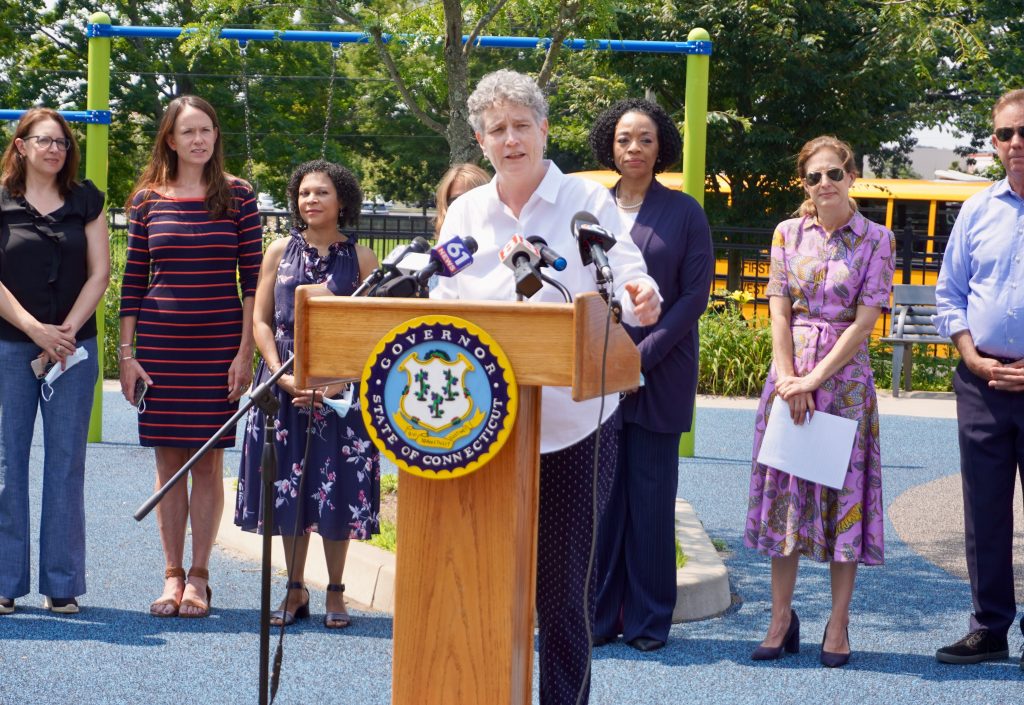 Statewide, more than $2.2 million has been allocated to summer enrichment programs at 36 Family Resource Centers.

The priority is for children entering kindergarten, but if space allows younger preschoolers who did not engage in in-person school last year can also sign up for the programs.

“All include family engagement and enrichment,” Bye said.

Bye said the governor had challenged commissioners to come up with programs that could utilize American Rescue Plan Act funds to have the greatest impact.

COVID shone a light on the challenges children have been facing in Connecticut. “We get the most bang for the buck out of Family Resource Centers,” Bye said. “We looked at this program and said how can we make this statewide.”

The children at the West Hartford program speak seven different languages, including Russian, Arabic, and Vietnamese, and will be attending kindergarten at either Charter Oak, Smith STEM, Whiting Lane, or Wolcott School this fall.

Margaret Hann, executive director of the Bridge, said the summer program at the West Hartford Family Resource also includes weekly yoga classes, music and facilitated gardening. “We have provided family engagement activities including parent lunch with a kindergarten teacher, a family yoga class, and a family gardening class. Each child is leaving the program with a new backpack filled with books and school supplies.”

Charlene Russell-Tucker, acting commissioner of the Connecticut State Department of Education, said this is a “best in class partnership.”

There was a decline in enrollment in pre-K as well as kindergarten programs in 2020, and the experience at the Family Resource Centers can help bridge that gap and prepare children to properly launch their school experience.

“Kindergarten is the foundation of all future learning, and we will continue working with our early childhood partners to ensure every student gets off to a strong start,” she said.

West Hartford Mayor Shari Cantor said holding Thursday’s event at the Family Resource Center in West Hartford was a “celebration, recognition, and an understanding of what the American Rescue Plan Act Funds are doing now,” and the benefits they can provide to the children who need it most of all. 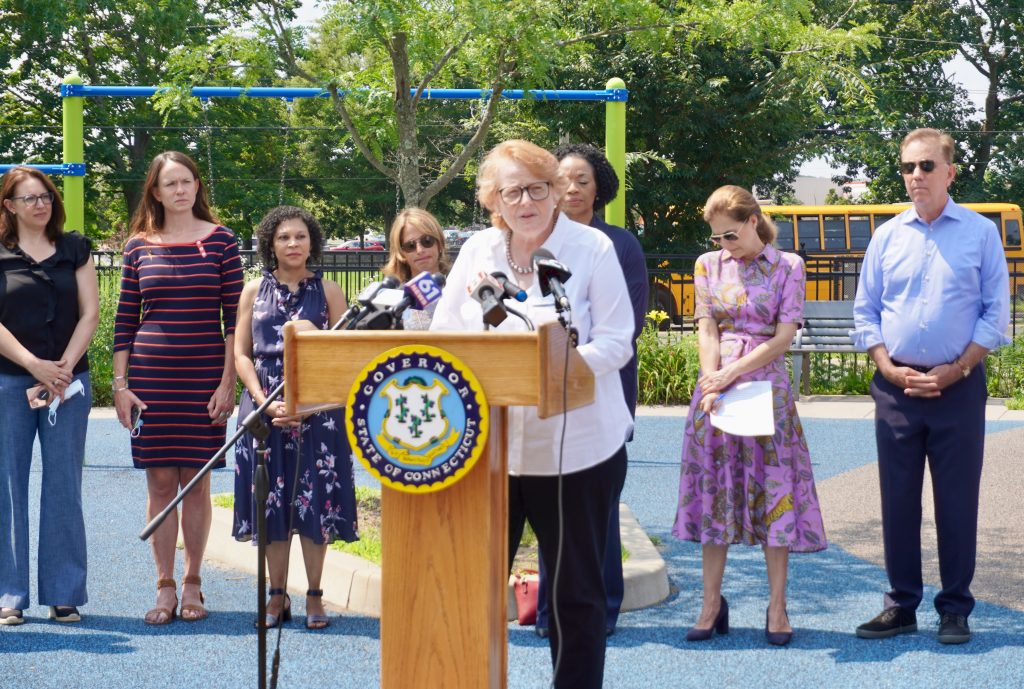