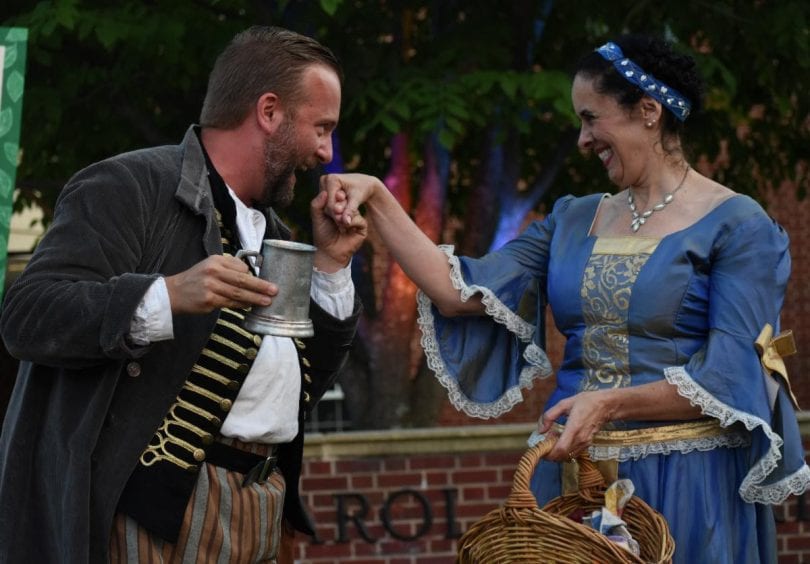 Nick Roesler and Laura Sheehan in The Merry Wives of Windsor (2019). Photo by Nicole Battistone.

Capital Classics Theatre Company celebrates its 30th Anniversary with 2021 Greater Hartford Shakespeare Festival production of Shakespeare’s ‘As You Like It,’ as live theater returns to the University of Saint Joseph in West Hartford. 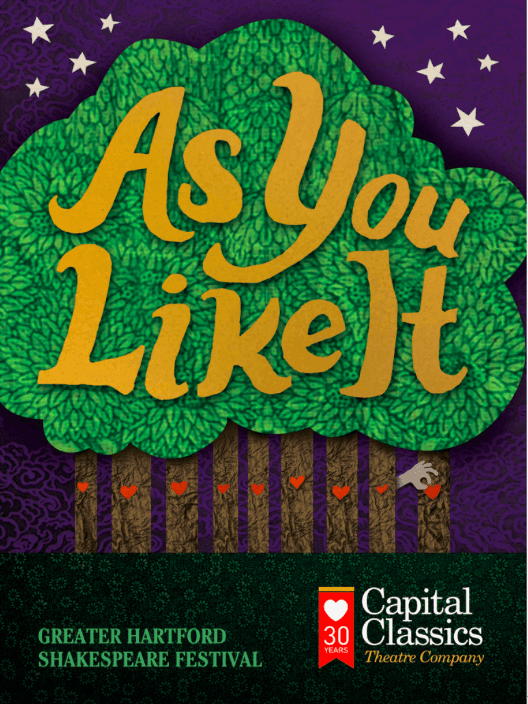 “All the world’s a stage” and on it, Capital Classics Theatre Company will celebrate its 30th anniversary season this summer with a return to live theatre.

The centerpiece of the troupe’s beloved Greater Hartford Shakespeare Festival will be an outdoor staging of As You Like It, one of the Bard’s most popular romantic comedies. The production will run for three weekends, July 29 through Aug. 15, 2021, on the grounds of the University of Saint Joseph in West Hartford, CT.

To maintain audience safety and comfort, seating will be limited, so early ticket purchase is highly recommended.

Director and Co-Founder Geoffrey Sheehan states, “As we’ve been tracking the Connecticut and CDC guidelines, we are delighted to announce that for our outdoor performances, masks only need be worn if the individual audience members desire. In the event of rain and we have to move the performance indoors, we ask that unvaccinated individuals wear masks for their safety and the safety of others.”

As Connecticut’s oldest continuously running outdoor Shakespeare festival, Capital Classics has a 30-year reputation for making Shakespeare accessible and affordable. Over its three-weekend run, the Greater Hartford Shakespeare Festival attracts theatre fans who gather each summer with family, friends, and picnic baskets on the grounds of the University of Saint Joseph to enjoy outdoor Shakespeare under the stars.

Sunday performances will see the return of Capital Classics’ popular “Sunday Professor Series,” where a scholar will speak pre-show for 20 minutes about the play. August 1 and August 8 will feature Dr. Milla Riggio, the James J. Goodwin Professor of English Literature at Trinity College. August 15th’s guest scholar is to be announced.

All 2021 performances of the Greater Hartford Shakespeare Festival will be held outdoors at the University of Saint Joseph (USJ), 1678 Asylum Avenue in West Hartford, CT. Tickets are $20 for adults, $14 for students/seniors, and $14 for discounted tickets for groups of 10 or more and “Let’s GO Arts!” members. Prices include a $2 USJ fee per ticket. This year tickets are only available online and in advance at HartfordShakespeare.org or Autorino.usj.edu. Tickets will not be sold at the door. Groups are encouraged to bring their own picnic dinners, beverages, lawn chairs, and blankets.

“As You Like It” and the Greater Hartford Shakespeare Festival are produced by the Capital Classics Theatre Company, in partnership with the University of Saint Joseph and the Carol Autorino Center for the Arts and Humanities. Capital Classics is committed to providing job opportunities and training to Connecticut’s professional and student theatre artists. The Festival is supported by passionate Shakespeare fans, local businesses, and generous foundations, including Cipher Creative Group; Connecticut Office of the Arts, with the support of the Department of Economic and Community Development; John & Kelly Hartman Foundation; George A. and Grace L. Long Foundation; Rheumatology & Allergy Institute of Connecticut; Bouvier Insurance; Empower Legal Group; and Edward C. & Ann T. Roberts Foundation.

Learn more about Capital Classics and the Greater Hartford Shakespeare Festival at HartfordShakespeare.org.