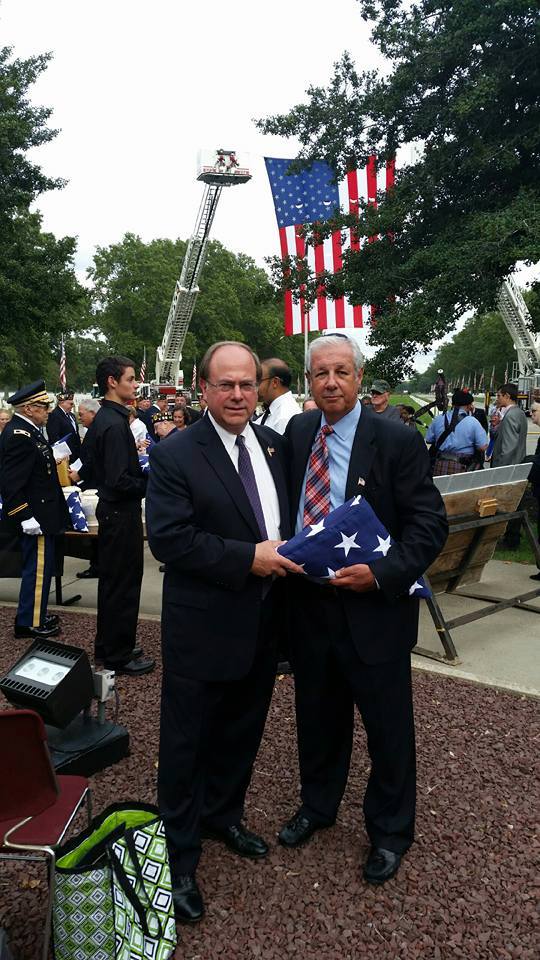 Leonard Holtz traditionally blew the shofar at his West Hartford synagogue on Rosh Hashana, but in 2001 he instead found himself at Ground Zero, helping search for 9/11 victims and providing spiritual support, an action which has forever changed him.

During the week following the 9/11 attacks, Leonard Holtz of Hebrew Funeral Association got a call from Rabbi Joseph Gopin of Chabad House of Greater Hartford.

“Rabbi Gopin asked me if I would act as a representative of the Jewish community at Ground Zero. He was concerned that there be Jews involved in the recovery,” Holtz explained, referring to the halacha (Jewish law) of collecting all body parts and blood for proper burial.

“Since I was 13 years old, I had been working with my father, who was the former director of Hebrew Funeral Association. I was uniquely trained in handling human remains as a Jewish funeral director. After 9/11 so many people were coming together, of all faiths … and I wanted to be a part of that effort,” he said.

Rosh Hashana – the Jewish new year – fell on Sept. 17 that year, just one week after the tragedy. Holtz, then co-president of Agudas Achim Synagogue in West Hartford, was the one who always blew the shofar – a ram’s horn fashioned into a kind of trumpet that traditionally is blown during the holiday prayer service.

But Holtz told his family and his synagogue co-president that he would not be in attendance for High Holiday services that year.

Instead, he packed a duffel bag with all his protective gear, bought a bus ticket to New York City and, as per Rabbi Gopin’s wishes, made his way down to the chaotic scene at Ground Zero. There, he connected with a network of Orthodox Jews, including members of Chabad, who pledged to take care of incoming rescue and recovery personnel, both Jewish and non-Jewish.

“It was an amazing network. They provided me with a place to sleep and eat and converted a coffee house into a synagogue for Jewish responders,” Holtz recalled.

Holtz had no idea if he would even be able to get close to Ground Zero when he arrived. But with his funeral director identification ID hanging around his neck, he entered the chaotic fray.

“I made my way on my own, to the different police checkpoints. First, I was told, ‘You may get past one police checkpoint, but you’re not going to get past a second.’ But each time, I explained and identified myself as a licensed Connecticut funeral director and explained that my mission was to help in the search.”

Along the way, Holtz had picked up one of the numerous photos of missing victims posted on fences around the site.

“There were hundreds of photos and this one stood out – a handsome young Jewish man from [the investment firm] Cantor Fitzgerald. Joshua David Birnbaum, who was on the 102nd floor of 1 World Trade Center. I said, ‘I’m going to make it my mission to find this young man,” he said.

Holtz eventually made it through three police checkpoints.

“My intention was to aid in the search. But it was a week later, and I was told that all that was being found were little fragments,” Holtz quietly recalled. “It was a very moving feeling and it’s just beyond imagination what I was seeing – the gray dust and the squawking on the police phones, hearing all of the real graphic information being conveyed.”

Right then and there his mission changed.

“I was carrying with me a tallis (prayer shawl) bag with a machzor (Rosh Hashana prayer book) and a shofar. I took out the tallis and I opened the machzor. And just as I opened it, a young couple came over to me, and said, ‘Can we help you?’ I said, ‘Well, I wanted to say some prayers. And I thought I might blow the shofar,’” he recounted.

The couple, who turned out to be Jewish, were members of a family that owned a respirator company. They were there to donate breathing equipment to first responders. They also knew the military commander in charge and introduced Holtz to him.

“I showed him my Connecticut licensed funeral director tag, and I said, ‘I’m here as a responder, but today I would just like to do something spiritual. It’s the second day of the Jewish holiday Rosh Hashana,’” said Holtz.

The sympathetic commander had one of his soldiers take Holtz and the young couple as close to Ground Zero as they could. They ended up near the pile of debris that President George W. Bush had stood next to two days earlier.

With the young couple calling out the Hebrew notes, Holtz blew the shofar, the sound of which calls on Jews to examine their deeds and correct their actions as the new year begins.

“Of all the millions of people in New York, I was standing there blowing the shofar,” Holtz said. “The whole experience was so powerful.”

Earlier this year the disaster in Surfside, Florida caused by the collapse of a high-rise condominium building, and the effort to rescue and then recover victims, reminded Holtz of 9/11. But he never really forgets what he saw at Ground Zero 20 years ago.

“Every year since, when I have blown the same shofar, in my mind I am always remembering Joshua David Birnbaum,” Holtz said. “Whenever a clock digitally shows 9/11, my mind basically stops and I say one sentence: ‘Shema Yisrael Adonai eloheinu Adonai ekhad’ (‘Hear, O Israel: The Lord is our God, the Lord is one”) – the single most defining statement in Judaism. And that has been etched indelibly in my mind every day of my life. I could be doing anything. I could be talking to you; I could be laughing … And then I see 9/11 and it’s a trigger. And the name Joshua David Birnbaum is a name that I think of almost every day.”

Serendipitously, 15 years later at a picnic in West Hartford, Holtz mentioned Birnbaum’s name and an Israeli woman he didn’t know said, “I know his mother.” Holtz eventually was able to speak to Birnbaum’s father, Samuel, on the phone.

“I told him that I carried his son’s picture. I said, ‘I never found your son, but I’ve got to tell you, spiritually, your son found me. He’s been with me,” said Holtz, fighting for a few seconds to hold back tears. “I get emotional, even 20 years later.

“There’s an expression, that true death only occurs when the memory of a person’s life is lost or forgotten,” added Holtz. “And that’s how I feel about Josh. His spirit found me.”

A version of this article originally appeared in the September issue of West Hartford Magazine. To read the entire magazine, click here.