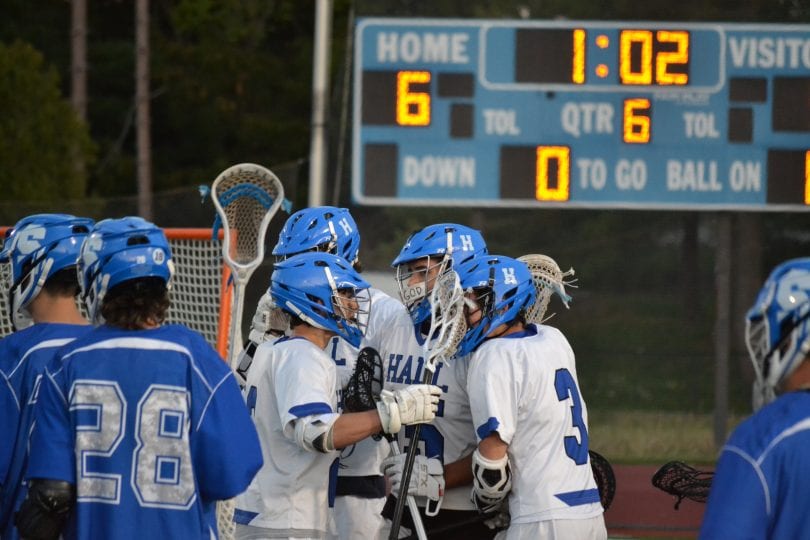 Aidan Guzman (second from right) of Hall is congratulated by teammates after his game-winning goal. Hall vs. Southington boys lacrosse. May 12, 2021. Photo credit: Paul Palmer 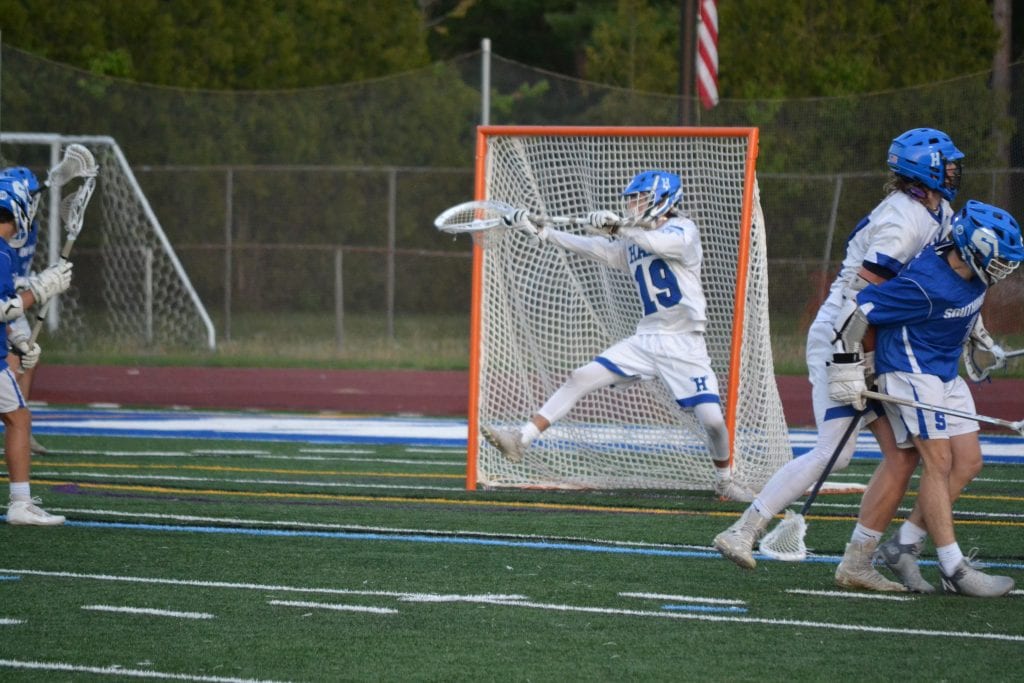 Campbell Manolis makes the save against Southington in Wednesday’s 6-5 win. Hall vs. Southington boys lacrosse. May 12, 2021. Photo credit: Paul Palmer

It was a game that had everything: solid goal-tending, aggressive hitting, close checking, timely scoring, and a story of redemption as the Hall boy’s lacrosse improved to 9-2 with a hard-fought, thrilling win over Southington on Wednesday.

The tone for the game was set early on. Southington, winner of three straight coming in, started the hitting almost as soon as the game began, and then started the scoring about halfway into the first.

Gavin Pelletier put the Knights on top with the man advantage when his shot beat Hall goalie Campbell Manolis. Both sides had good scoring chances, but it would remain a one-goal game until Hall’s Logan Murphy found the back of the net with just 48 seconds left in the period.

“I kept telling the boys all week how solid they (Southington) are and how they play 100% all the time, just like us,” said Warriors coach Jared Kirkorian. 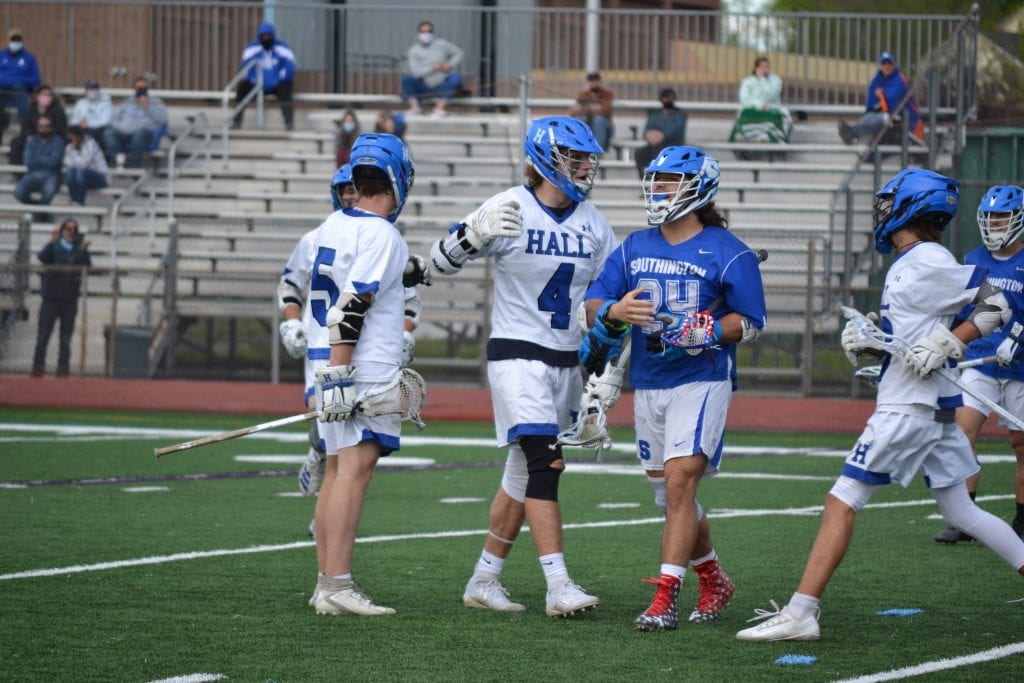 The game then progressed into a series of special teams battles as the flags and foul calls flew from every angle. Hall started the second a man up and extended it to a two-man advantage but could not find the back of the net despite some good looks at goal. Then Hall would go down a man on a slashing call and Southington’s Kyle Raia would make them pay when he scored with 7:23 to go in the period to give the Knights the 2-1 lead. 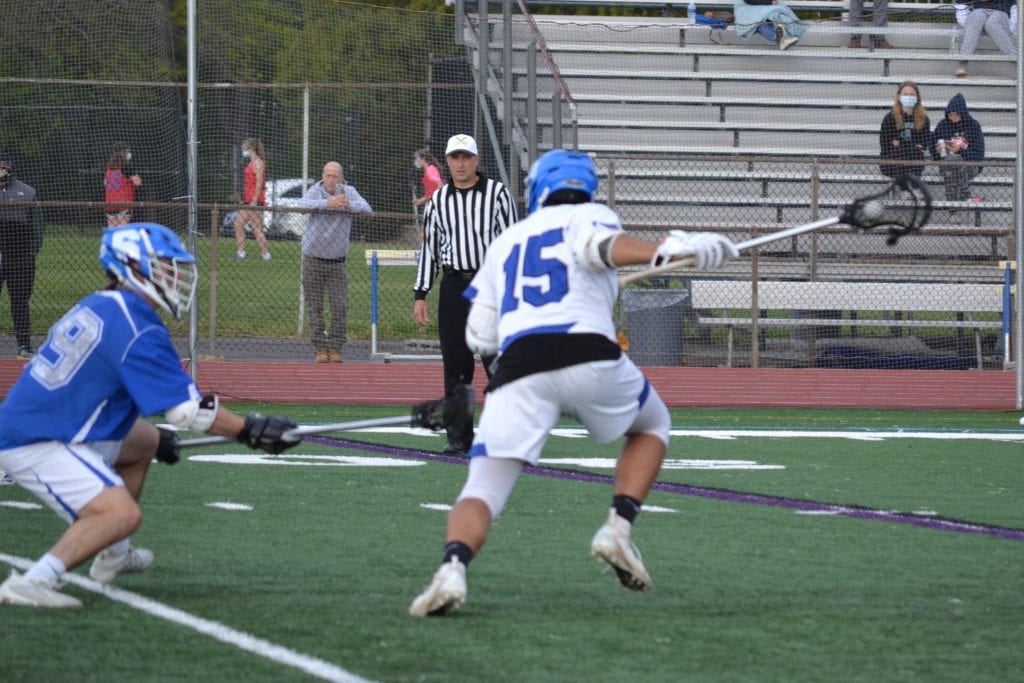 Aidan Guzman of Hall sets up a Southington defender as he moves in to score. Hall vs. Southington boys lacrosse. May 12, 2021. Photo credit: Paul Palmer

But just 1:20 later, again on the man advantage, it was Hall’s Aidan Guzman netting the first of his scores. With 2:05 to go and Southington again with the man up, Sebby Foresi blistered a shot past Manolis for the lead.

The first half ended with a big save by Manolis with with 1 second to play, to keep it a 3-2 deficit for the home team. At the intermission, Kirkorian and his staff knew the mental mistakes and the penalties were hurting the team.

“We threw the ball away on man-up situations, but they have heart and our defense worked hard to get the ball back for another chance,” he said.

The Warriors won the opening face off of the second half and went on the attack. But after goalie Matthew Rodrigues turned aside a scoring chance, the Knights took possession, and after a patient passing game, Lincoln Cardillo scored on a spinning shot as he spun on a defender, coming around the right side of the goal.

Hall’s Teddy Gianoulis cut the lead to 1, and then one of the game’s key moments happened.

The Warrior’s Guzman appeared to have tied the score just 59 seconds after Gianoulis’s goal, but the celebration was short lived. Southington coach Ron Chase called for a stick check on Guzman and after checking, the referee’s ruled it illegal. The goal was disallowed, and Guzman was given a penalty.

“That lit a fire under us,” said Guzman of the call.

Hall would kill off the penalty, but soon found themselves down again after defenseman Issac Levine was handed  an unsportsmanlike conduct penalty and a misconduct penalty after complaining about an uncalled cross check that had been delivered to him. With Southington up a goal and two men, Manolis and the defense had their best stretch of action, denying three solid Southington scoring chances and keeping Hall in the game. 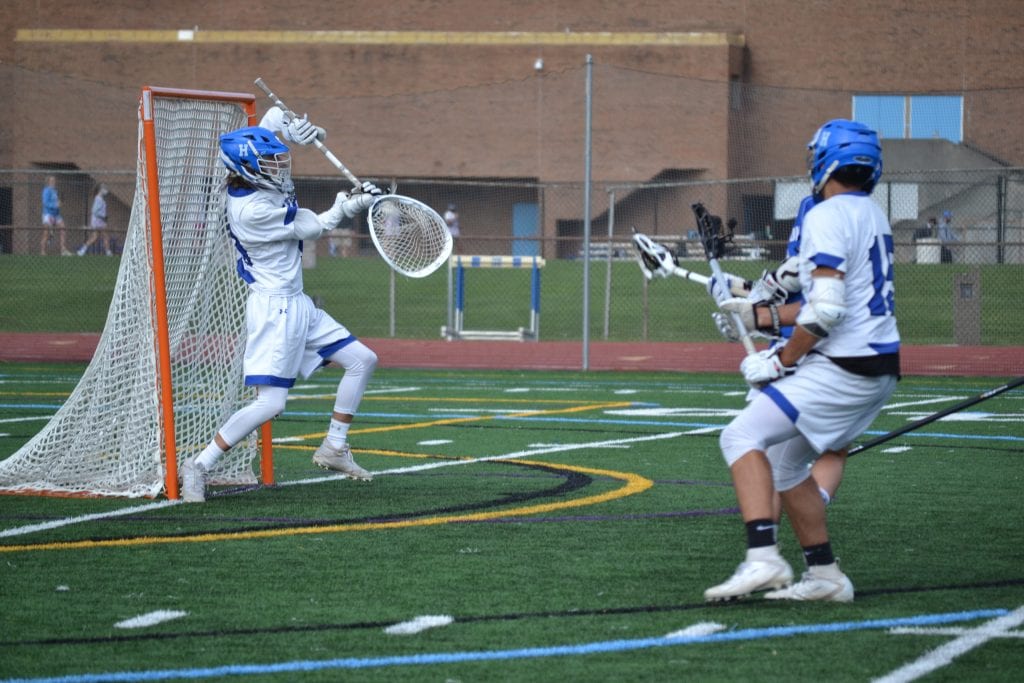 Goalie Campbell Manolis making one of his saves in a two-OT win. Hall vs. Southington boys lacrosse. May 12, 2021. Photo credit: Paul Palmer

“Campbell is playing lights out every game,” said Kirkorian of the goalie. “He tells the D where they need to be, and the D does not let anything easy happen.”

Trailing by one entering the final quarter, Hall saw their opponents control the ball for the opening 1:15 of the quarter before a violation call gave them back the ball. But the Warriors were called for a penalty at the same time as the violation by Southington and went down a man again.

They managed to kill it off, but 5 minutes into the period it was Southington’s Gavin Pelletier scoring to make it a 5-4 game.  Thirty-nine seconds later, Guzman would find himself all alone with a loose ball in front of the Southington net after a poor clearing attempt by the Knights. He made no mistake, netting his second of the game.

The score would remain tied as regulation time expired, the lights came on on the field, and the teams headed for overtime. 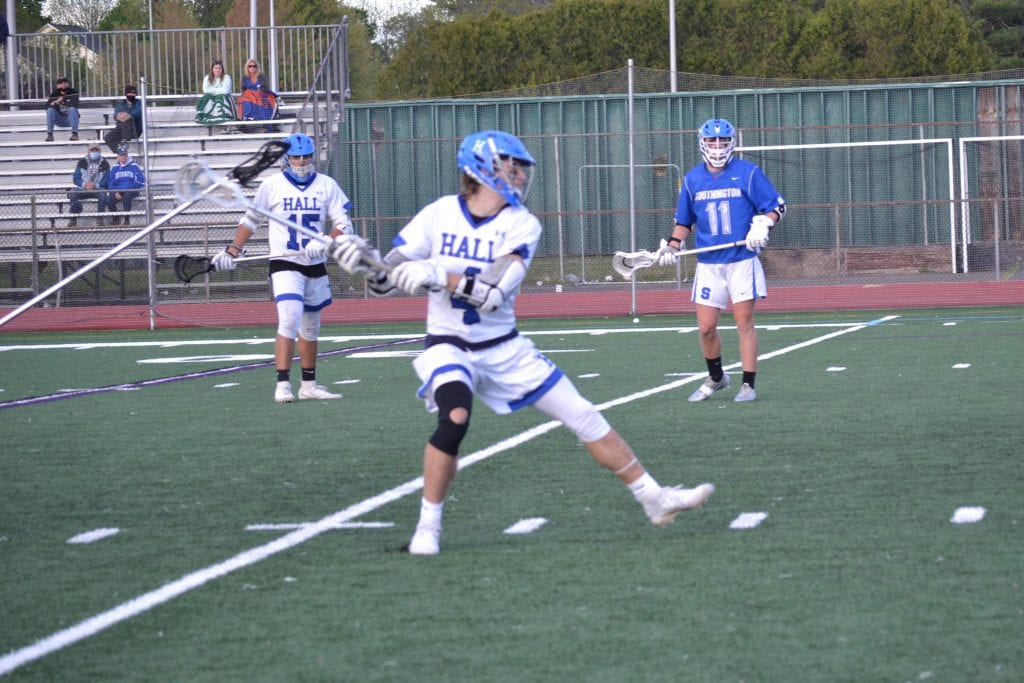 In regulation, there were several plays that drew the ire of players and coaches from both teams and drew rebukes from the officials. In the first extra period, each side had good scoring chances denied by the goalies. First it was Manolis – who had yielded just 38 goals in the previous 10 games – and then it was Rodrigues’ turn at the other end, denying the Warriors.

Early in the second overtime, the officials signaled for a Southington time out, but the Knights had already used their allotted one. When Hall pointed that out and asked for a penalty, Southington’s coach responded he had not called a time out but was calling for the ball to be moved out by his team. The referee then allowed play to continue with no call.

As the clock wound down to under 2 minutes in the second OT, Manolis came up big again, and Hall went into transition. Guzman, who had a goal taken away earlier in the game, streaked in from the left-hand side then let loose a shot that found the back of the net, giving Hall the 6-5 win.

“I don’t even have the words to describe the goal,” said Guzman.

“He had his best game of the season,” said Kirkorian of his senior midfielder. “After that earlier call on Guzman, I told the team the only thing we needed to worry about on the field is ourselves and get back on the horse and get another goal.”

Hall, who lost their first two games of the season, has now won nine straight. They have a pair of tough match-ups ahead –  traveling to Northwest Catholic on Monday and then hosting Simsbury May 20. 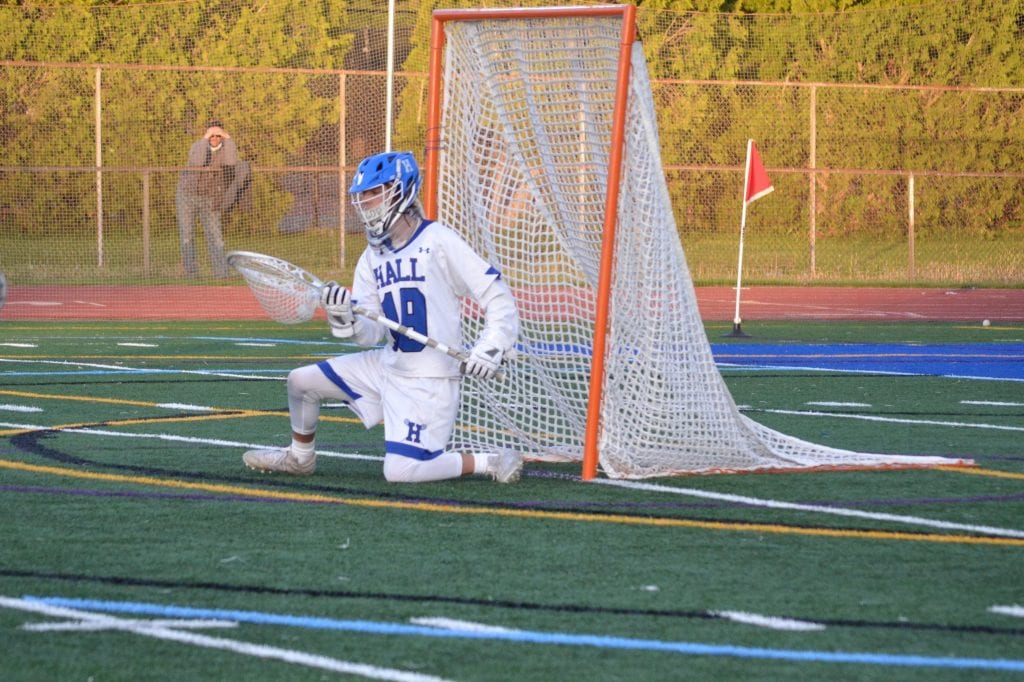 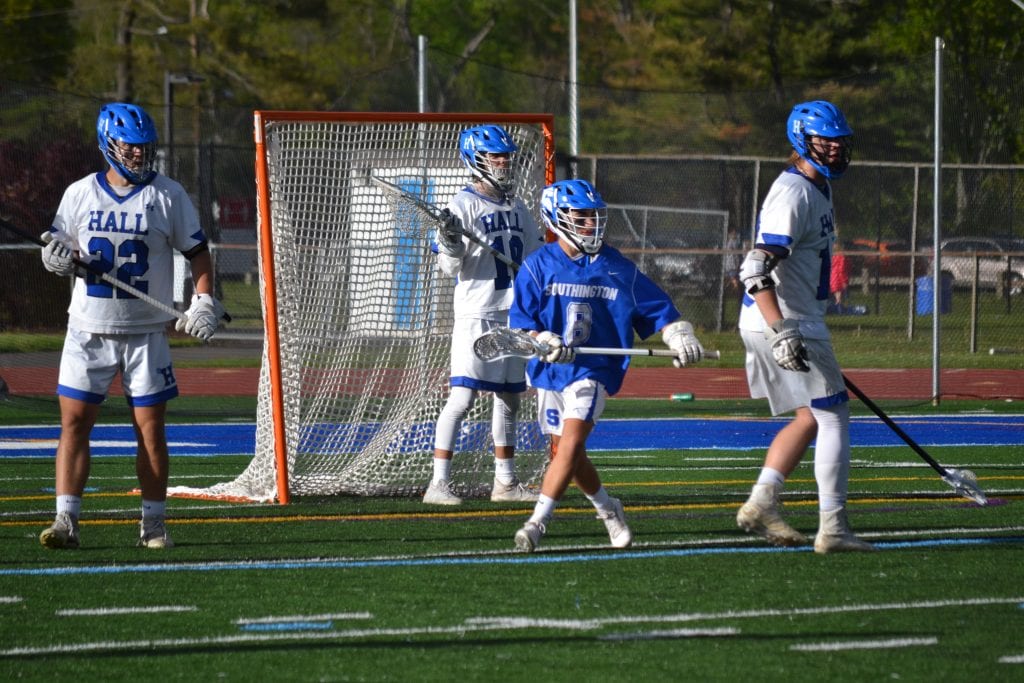 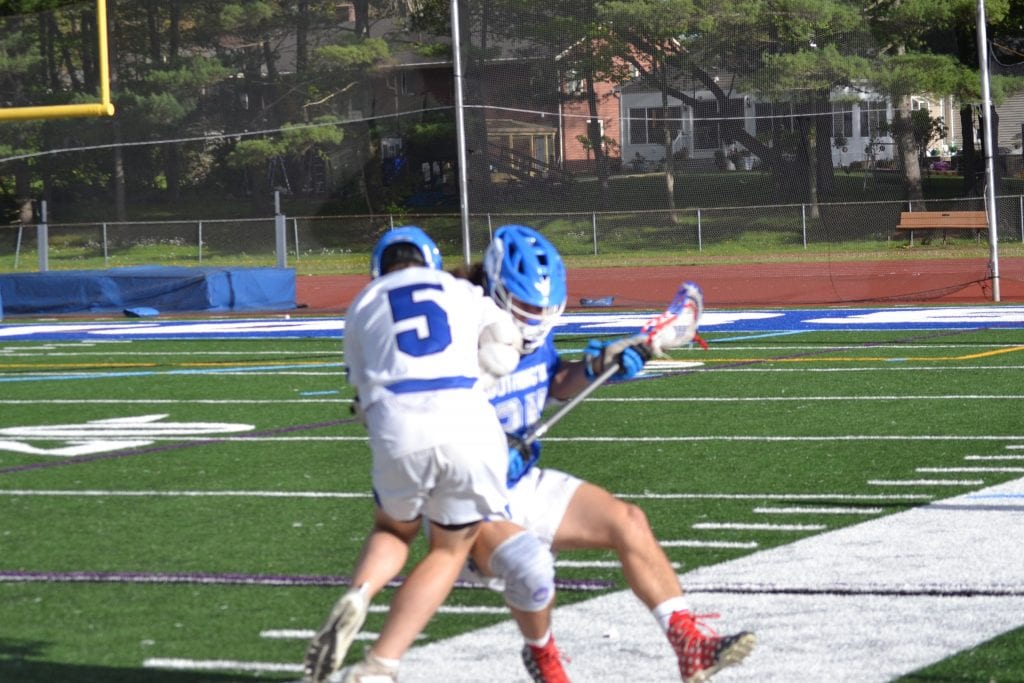 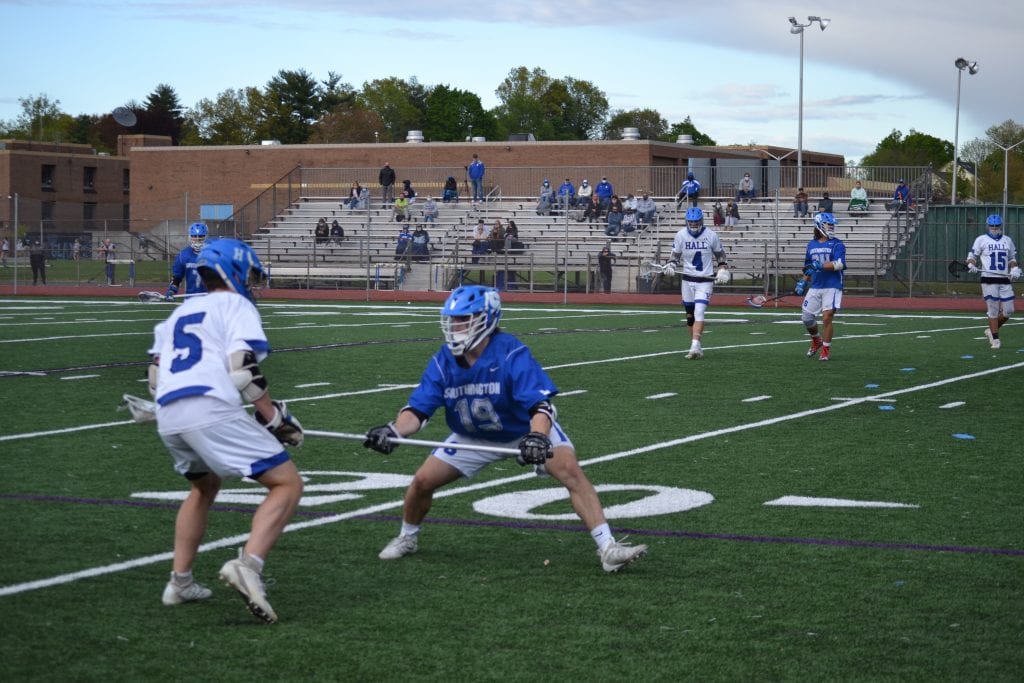