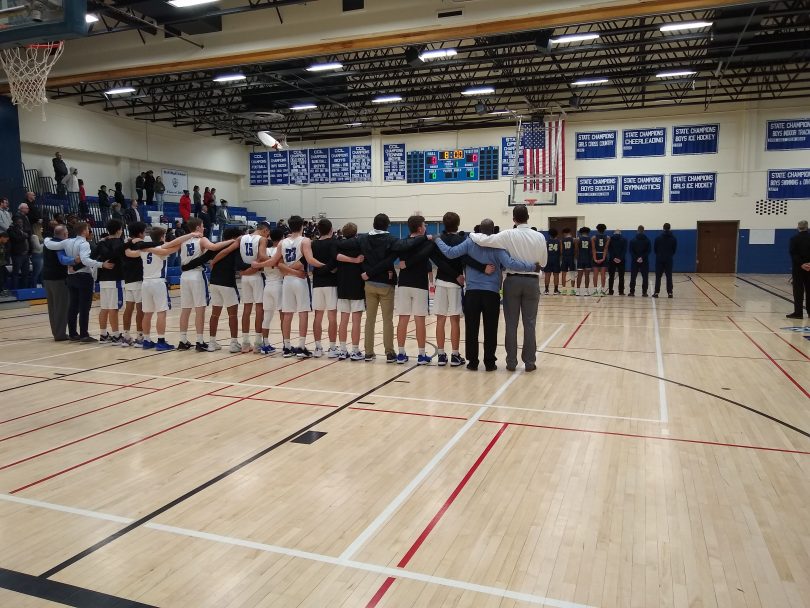 The Warriors scored 17 unanswered points to start the game and never looked back en route to a season-opening victory.

The Hall boys basketball team jumped out to a double-digit lead and maintained control throughout the game in a 65-37 win over Platt to start the 2019-20 season Friday night in West Hartford.

Hall head coach Bryan Moretti credited his team with playing smart basketball to start the game and strong defense to limit an athletic Platt team (0-1) that attacked the basket consistently.

“I thought we just played real smart basketball in the beginning,” said Moretti. “We just made simple decisions, and we played well. I’m happy how they started … [with] no experience, so guys stepping into that environment opening night and playing really well, that’s great.”

Matt Walker, Will Fox, and Jack Cote scored in double figures for the Warriors with 17, 16, and 12 points respectively.

Walker forced turnovers on defense early in the game to spring teammates for scoring opportunities. Makyle Ramos, Alex Mogel, and Fox put together strong rebounding efforts for Hall. Cote, meanwhile, scored all 12 of his points on four 3-pointers.

Despite the strong performance Friday, Moretti said the team’s lineup going forward is still a work in progress.