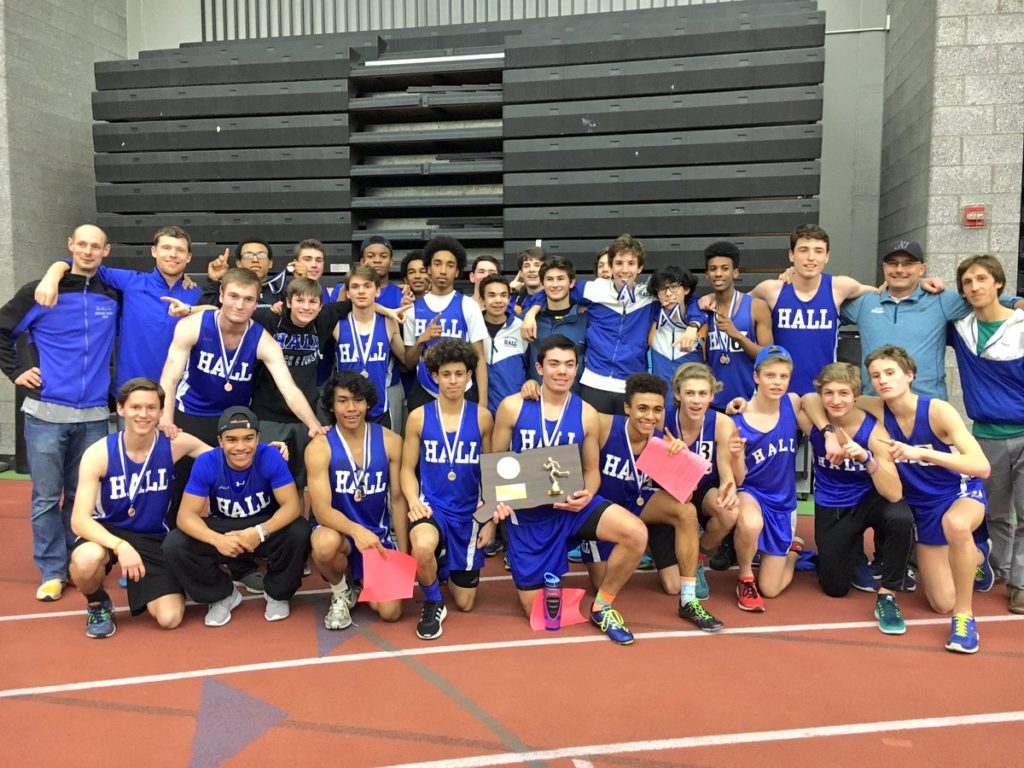 Hall indoor track and field coach Scott Sampietro said that he considered winning a state championship a distinct possibility going into the season, but it wasn’t until the very last event of the Class L meet Saturday that the Warriors secured the title.

“We have a deep team,” Sampietro said, and that’s a helpful advantage when putting together groups of athletes to run the relay events in order to score the most points.

The 4×400 is the final event of a track meet, and Sampietro said he was very confident in the team of Jason Farrell, George Touch, Josh Rivera, and Connor Blodgett.

Baton in hand, Blodgett, the 4×400 anchor, crossed the finish line just ahead of the Bristol Central runner. It was a photo finish, and the 10 points awarded to the first place team in the relay earned Hall the Class L first place trophy – edging out Middletown by 2 points. Second place would have given Hall the tie.

“There’s not another runner I would have rather seen in that position,” Sampietro said of Blodgett, who is a senior.

Sampietro said all he had told the team before the relay was to run smart, turn the baton over, and keep in the race.

Sampietro and the other coaches had studied the competition, and knew what times to expect the runners from other schools to achieve. They entered students in events in order to maximize points, believing that a Class L title was achievable. But the coaches didn’t tell the team, and didn’t want to put that pressure on them.

“We didn’t let the kids know this was a possibility,” Sampietro said.

Middletown was the favorite to win Class L, but two events before the 4×400 the school’s runner in the 300m, who was expected to win, came in fourth.

Sampietro said that Hall needed points in the 3200, and got them courtesy of Trey Cormier’s second place finish (9:46.38).

Patrick Cassidy’s second place finish in the 1600 (4:35.46) and the 4×800 relay team of Cassidy, Cole Canarie, Dylan Rendon, and Mo Ali, which finished in second place with a season-best time of 8:13.63, were also major contributors to the championship.

Hall’s indoor track and field state title was the first since 1955.

Hall runners posted some fast times throughout the season, but the team hadn’t been mentioned as a favorite.

“We flew under the radar for most of the season. It worked to our advantage,” said Sampietro. “It was nice not to have the pressure or it could have gotten under our skin.”

Some of Hall’s athletes, including the 4×400 relay team, will have a chance to continue the season. Event winners and the next top 14 performers across the divisions qualify for the State Open on Feb. 20, but the qualifiers won’t be announced until after all of the divisions have had their meets. Due to weather-related postponements, the Class LL meet will take place on Wednesday, Feb. 15.

Sampietro said that he’s hopeful some of the relay teams will also make it to New Englands.

Other notable performances in the Class L meet mentioned by Sampietro include: