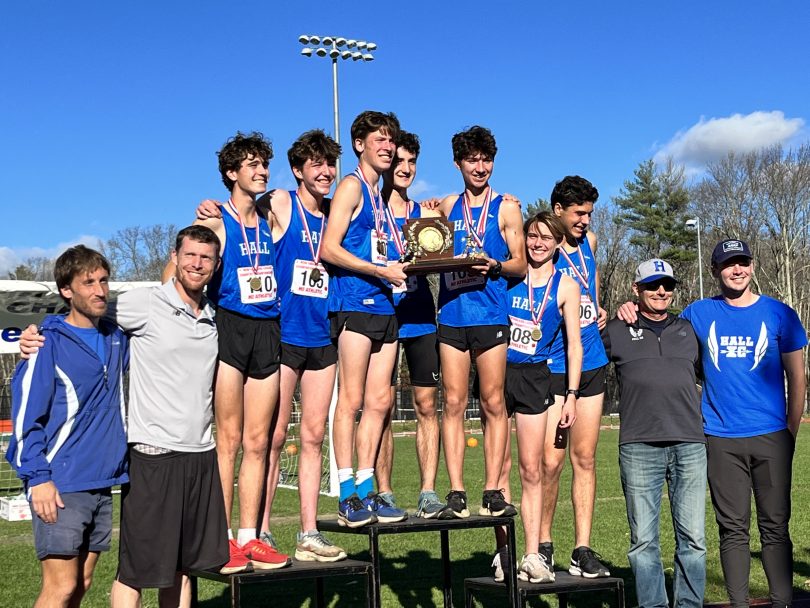 Runners from West Hartford’s Hall High School employed patience and experience along with their speed to win their first-ever New England Championship title. 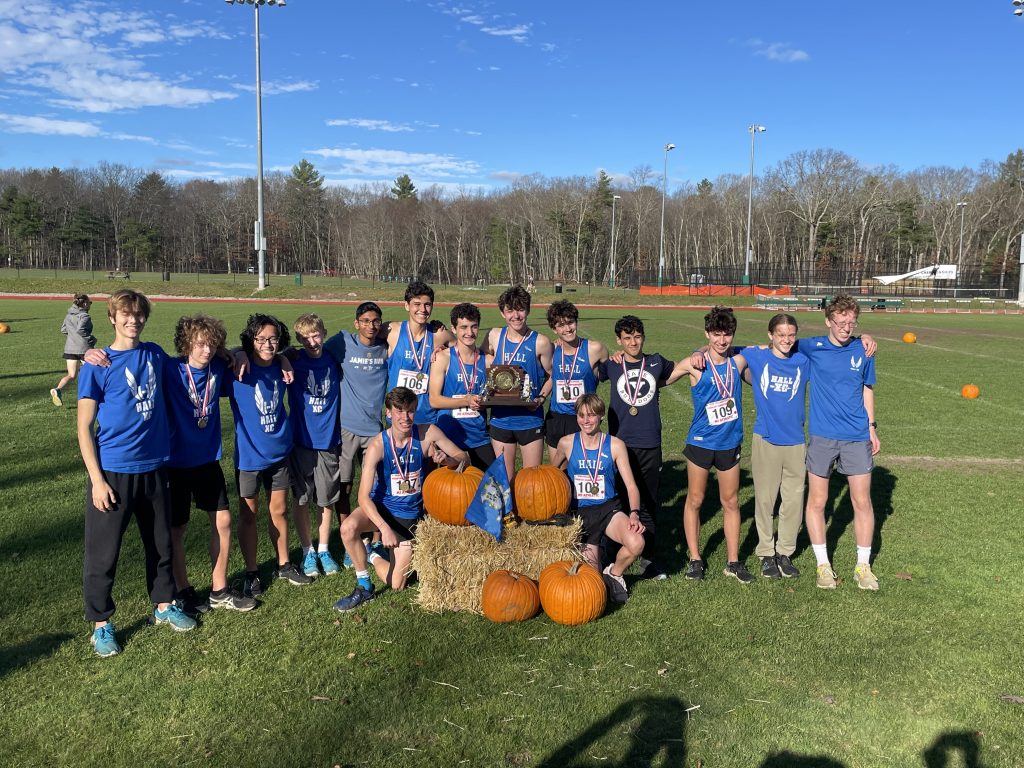 By now, it seems like a routine. Shockingly enough, this race was different from any other.

After coming off of winning their conference championship, Class LL championship, and State Open championship, Hall’s boys cross country team was on a roll. Following last year’s fifth place finish among the best teams in New England, the boys were in town for a title.

“It’s been a special season, and yesterday was the best day in the history of Hall cross country,” head coach Jeff Billing said.

Hall, along with the six best finishing teams from each state in New England, followed by the top 25 individual finishers from each state open meet, approached the line on a balmy Saturday at Ponaganset High School in North Scituate, RI. Their main opponent was Rhode Island’s Bishop Hendricken, which finished fourth place last year, just one point ahead of Hall.

About 1 mile into the race, Hall’s top runner, junior Isaac Mahler, followed closely behind favorites-to-win Devan Kipyego (St. Rapheal, Rhode Island) and Aidan Cox of New Hampshire’s Coe Brown. Many of the other boys were pushed back from the start and played it cautiously.

Hall seniors Colin Goldschmidt and Ethan Striff-Cave were about 40 places behind, with seniors Avery Allen, Nathaniel Aronson, Lucas Pyrro, and sophomore Ben Lewis all scattered throughout places 75 through 125. “For the most part, our game plan was to go out smart and work the last mile to catch as many people as possible, and that plan worked very well,” Aronson said.

A little past the first mile mark the course brings a short, steep hill followed by a long gradual downhill. Many of the boys began to make their moves, making up ground on the Hendricken boys just ahead of them but the race was still too close to decide a team in the lead. With about a kilometer to go, Mahler had passed Hendricken’s top boy and Goldschmidt pulled ahead of Hendricken’s second boy with Striff-Cave moving closer alongside him. Lewis, Aronson, and Allen were all close behind a pack of Hendricken runners. Pyrro was still ahead of the last Hendricken boy.

At the finish, Mahler finished in 15:46, in sixth place, a big improvement from last year’s 46th place finish.

Goldschmidt came up in 16th place with a time of 16:13. Striff-Cave blew past Hendrick’s second boy and finished 24th in a time of 16:29. All three boys claimed All-New England titles as well.

Lewis is really the hero, Billing said, and learned from mistakes in past meets going out too fast. He and the other runners got great advice from assistant coach Everett Hackett (winner of this year’s Hartford Marathon), who had raced on the Rhode Island course in the New England championships as a junior. Billing said Everett urged them to be very patient on the first part of the course – and all seven Hall runners raced better than they had previous week.

“It’s an amazing accomplishment. I’m just so proud of the guys,” Billing said.

Hall finished with 89 points, Bishop Hendricken had 97 points for second, and Ridgefield (CT) – whose top runner, Steven Hergenrother was second in 15:37.2, was the third-place team with 161 points. Kipyego crossed the tape in first place in 15:24.7. Visit MySportsResults.com for complete results from the meet.

When they announced the winning team Saturday, Billing said it was an amazing release of energy. As a coach, he said, “It fills you with joy because you know they’re going to remember that forever.”

“Pretty surreal. Hall history was just made, big time. We all worked really hard and ran the whole 5,000 meters,” Mahler said. “Across the board, not a single person had a bad day, and we were able to work together throughout the race and push ourselves to the  limit and do what we had set out to do since the beginning of the season,” senior captain Nathaniel Aronson added.

What’s next for the team you may ask? In just two weeks, the varsity guys, along with a group of JV athletes, will make their way over to Bowdoin Park in Wappinger Falls, NY for the Nike Cross Country Northeast Regional Championships on Nov. 26, 2022. The varsity athletes will compete against many of the top teams across the northeast for a spot at Nike Cross Country Nationals in December. The open race goes off at 10:30 a.m., followed by a 1:30 p.m. starting time for the championship race.

Billing said this team is very talented and very focused, and won the New England meet in the only way they could have won it. He thinks they have a shot at being one of two teams from the region to make it to Nationals. “The boys are going to New York with a dream,” he said. 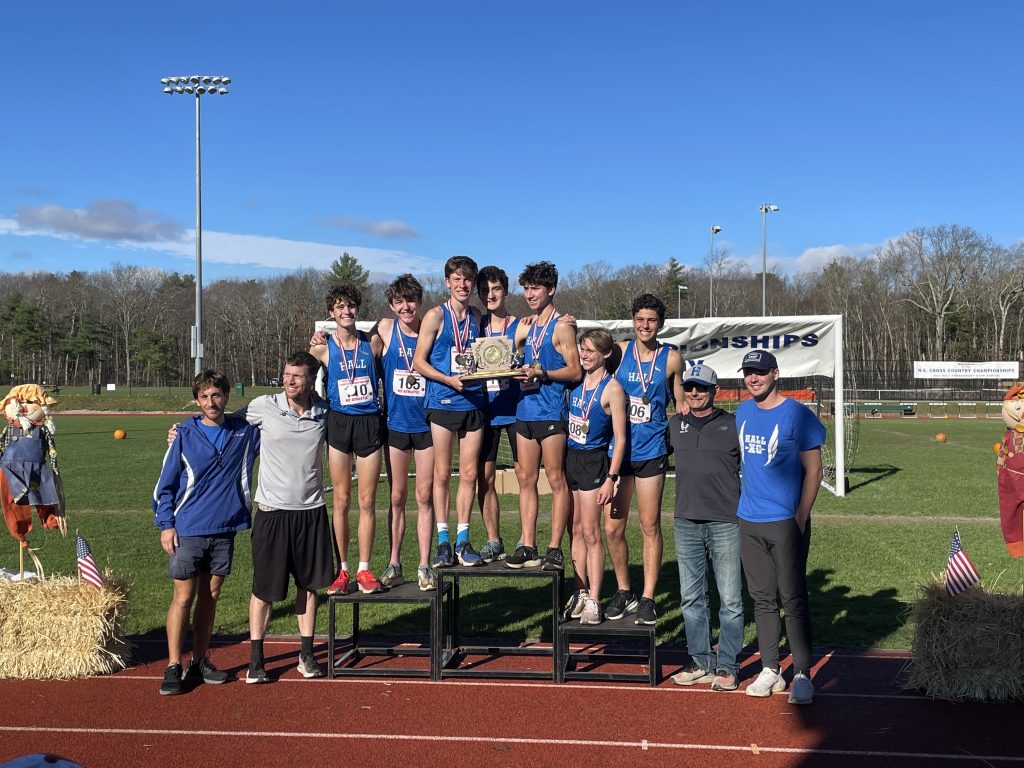