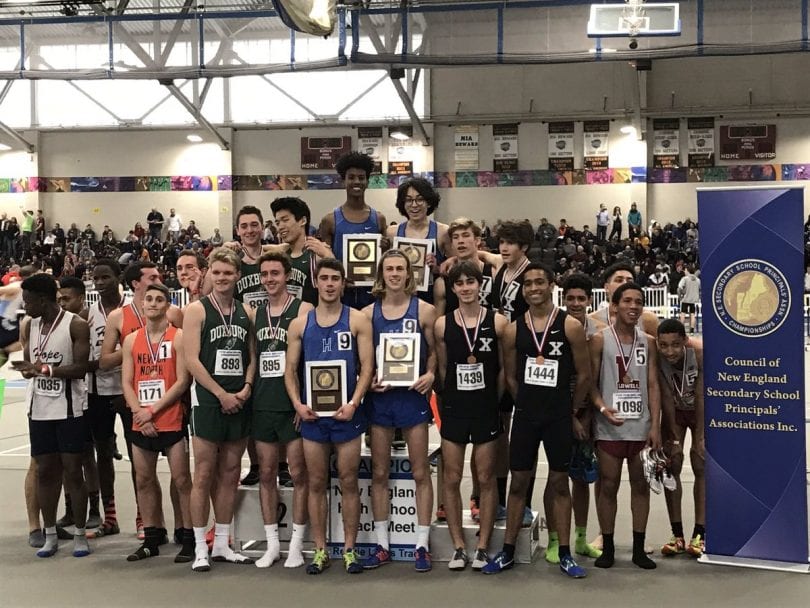 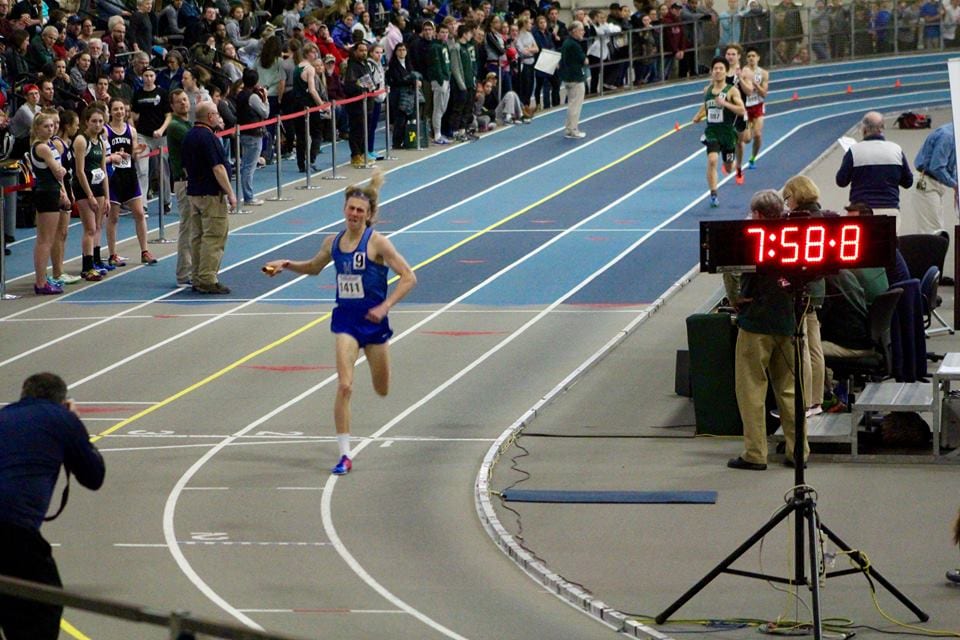 Miller Anderson just after crossing the finish line in the 4×800, giving the Hall relay team a first-place finish that also qualified them for Nationals. Photo courtesy of Linda Miron

The Hall boys indoor track and field team has continued its amazing run – pun intended – breaking more school records and winning the championship in the 4×800 relay on Saturday at the New England Interscholastic Indoor Track & Field Championships at the Reggie Lewis Athletic Center in Boston.

Heading into the New England Championships, however, the 4×800 relay team was very much an underdog, seeded ninth.

“While they had been getting faster every week, they were hoping for a big drop in time and to compete for the win by adding junior Miller Anderson to the anchor leg of the team’s relay lineup,” assistant coach Jeff Billing said Sunday.

Billing said that when the team met the day before the meet, every athlete had a chance to speak. “Anderson made it clear what they were going to Boston to do: ‘I want to win it,’ he told his teammates.”

Billing said that an added incentive was the memory of finishing in seventh place at the New England Championship meet in 2017, missing a chance to be named All-New England. Although the relay team set a new school record that day, they knew that if they had been one second faster they would have made All-New England. This year they also wanted to make the 8:01 qualifying time they needed to run to enter their team in next week’s Indoor Nationals meet in New York City.

Anderson was substituted for Paul Chavey, juggling the overall lineup to put the team in the best position to face the loaded field at the New England meet, Billing said.

“Junior Muhammad Ali, who has also been on fire the last few weeks running anchor leg for their team at both state meets while also setting personal bests in the 400 and 600, was moved to the leadoff spot. In a crowded field of 15 teams, Mo was told to use his 400/600 speed to get into the top three to four teams and away from the mess of the crowd. Ali executed the plan perfectly, getting off the line hard from the outside of the waterfall and fighting his way into fourth place by running a hot 27.2 first lap. There he would remain for almost his entire leg, passing one team just before the first exchange with a season best split of 2:00.5 to hand off in third place, within one second of the leader,” Billing said.

Cole Canarie, the only senior on the relay team, ran in second place, fighting hard with a pack of runners at his heels to keep the third place position. “Three times he accelerated to prevent anyone from overtaking him. On the last lap finally a few of these teams got by, but he had done his job – the team was still right near the front as he exchanged in sixth place after running a season best of 2:02.7,” said Billing.

Junior Dylan Rendon ran the third leg, going out at what Billing called a “suicide pace of 26.4″ on the first lap, pulling into fifth place. “From there, despite his aggressive early pace, Dylan continued to move up, each lap passing another team. By the final stretch of his leg he had nearly caught the leaders, handing off the baton in third place, within a second of the top two teams: Xavier of Connecticut and Duxbury of Massachusetts,” said Billing. Rendon finished his leg in a season-best 1:59.6, handing the baton to Anderson with just a 10-meter gap to catch the leaders and within reach of the win as well as the 8:01 qualifying time for Nationals.

Miller closed the gap, but two teams from behind him also caught up, and five teams were contending for the win, running single-file with three laps to go. Anderson’s split of 28.2 was “comfortable,” Billing said, leaving him plenty in the tank to make his move.

“Around the turn and into the second backstretch Miller passed the second place team and moved right onto the shoulder of the leader from Xavier, the Connecticut state champions. He paused there for a few strides to see how the other runners would respond to his move. Feeling that he was the strongest, he made a second move with two-and-a-half laps to go and went to the front. His second and third laps were both run in 29.9 as he ever so slightly pulled away,” said Billing. “When the bell rung, as the announcers would put it, ‘You saw it, when that bell rang, he just took off to another gear.'”

Miller ran a final lap of 27.7, and with a season-best 800 split of 1:55.7, propelled Hall to its first ever New England 4×800 championship. Collectively the boys clocked a new school record of 7:58.69, achieving the coveted Nationals qualifying time and running one of the top 20 times in the nation this season. 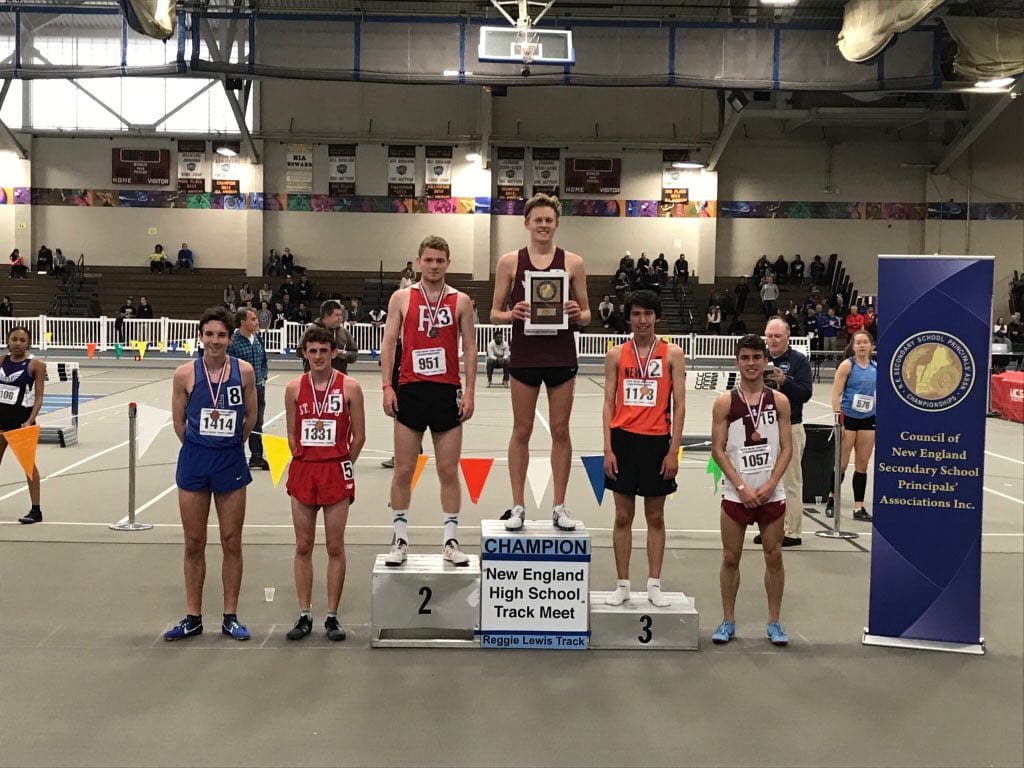 The mile and two-mile races could be described as the “premier events” of the meet, Billing said, both won in meet record times that were also the top times in the country this indoor season.

Ryan Oosting of Arlington, MA, was looking to win, but Cormier had his sights set on at least sixth place, which would give him All-New England honors.

Cormier had won both the mile and two-mile races at the Class L state meet, and earned a trip to New Englands in both the mile (with a third-place finish in the State Open) and the two-mile (with a fourth place finish in the State Open). He decided to run only the longer race on fresh legs, a decision that opened up a space for another Connecticut runner to participate in the 1600m, and gave Cormier the chance to test his strength without the fatigue of having already done another race.

“With the record-breaking pace set up front, the entire field went out ahead of pace. Cormier came through the mile in a blazing 4:36 and found himself in eighth place,” Billing said. “He appeared to be barely holding on.”

Billing said that as the race progressed, the athletes in the lead began to falter, and the blistering pace slowed. Cormier also slowed from running 34-second laps to 36- or 37-second laps, dropping into ninth place with two laps left.

“Thankfully, right when it looked like he might not have much left in reserves, his stride got a little bounce back, and he started moving through the field. On the penultimate lap he ran a 33 and moved into eighth, then at the bell he passed another runner and moved into seventh,” said Billing.

Cormier was 20 meters out of sixth place coming into the backstretch, and unleashed his kick, running a 31-second lap and overtaking the sixth-place runner in the final 100 meters.