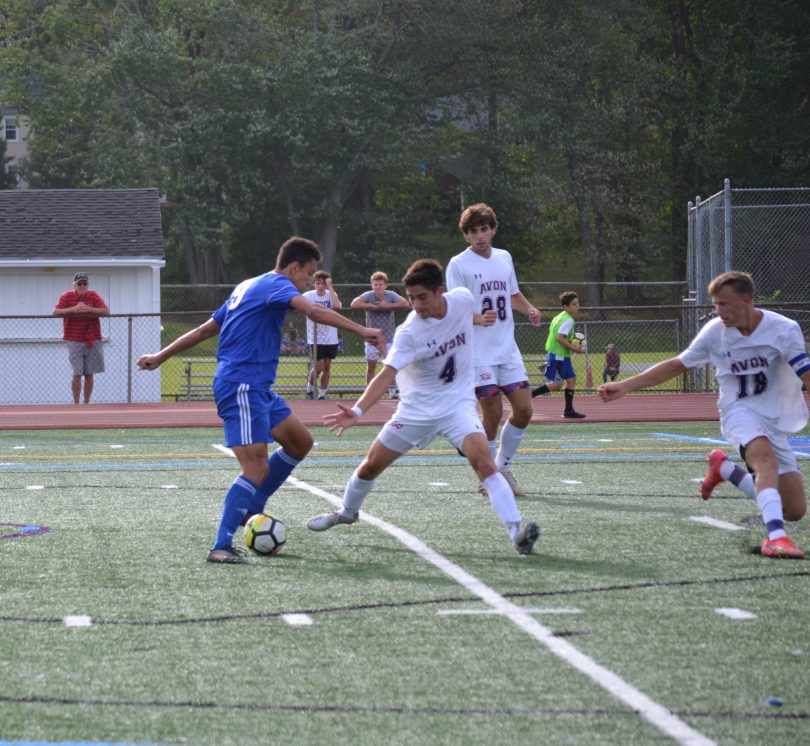 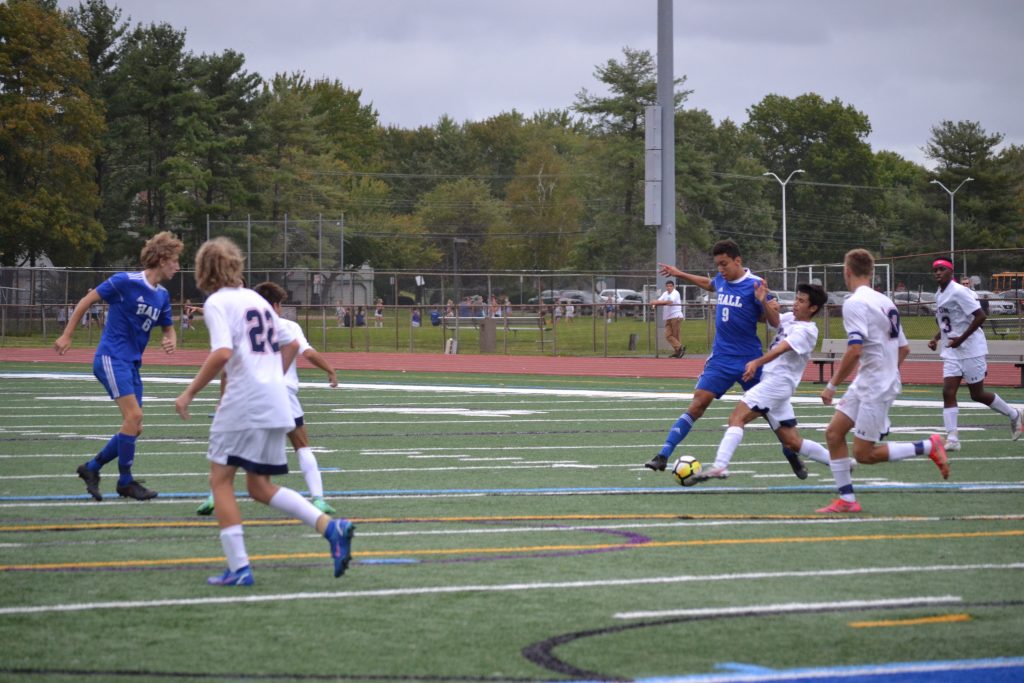 Through the first games of the year, the Hall boys soccer team had the answers to whatever their opponents threw at them. But just when it seemed they had all the answers, Avon changed the questions and the Warriors had to settle for a 1-1 tie in Thursday’s matchup in West Hartford.

“It’s great for us to know now that you can’t just step on the field and win,” said Warrior head coach Zeke Seguro. It wasn’t that Hall didn’t put in the effort; it was more that they could not solve the Falcons’ defensive riddle.

It didn’t help Hall’s chances when the visitors scored first just 1:36 into the game. Senior Nate Tiffany, who played a stellar game at both ends of the field, headed in an Avon corner kick. About 8 1/2 minutes later, Hall’s Colin Fairchild received a yellow card after grabbing the jersey of an Avon player. From that point on, Hall seemed to wake up and control the game and have the better scoring chances.

Junior Lucas Almeida – who had scored 11 of Hall’s 17 goals prior – forced Avon’s sophomore goalie Buster Akers to make the first of several saves. Avon’s game plan was simple, they packed the defensive zone, surrounded Almeida with multiple defenders, and had senior defender Jose Gonzalez mark Almeida one-on-one all over the field.

“They sat back today,” said Seguro of his opponent, “and only attacked with two. They came to get the tie and did what they had to do today.”

Hall did have its chances but they were thwarted by Akers, and when he could not get there, it was the post and crossbar on the other end of the Warriors’ shots. John Hunt’s one-timer off a long cross hit Akers in the foot, then went off the post with about 6 minutes to play in the first. 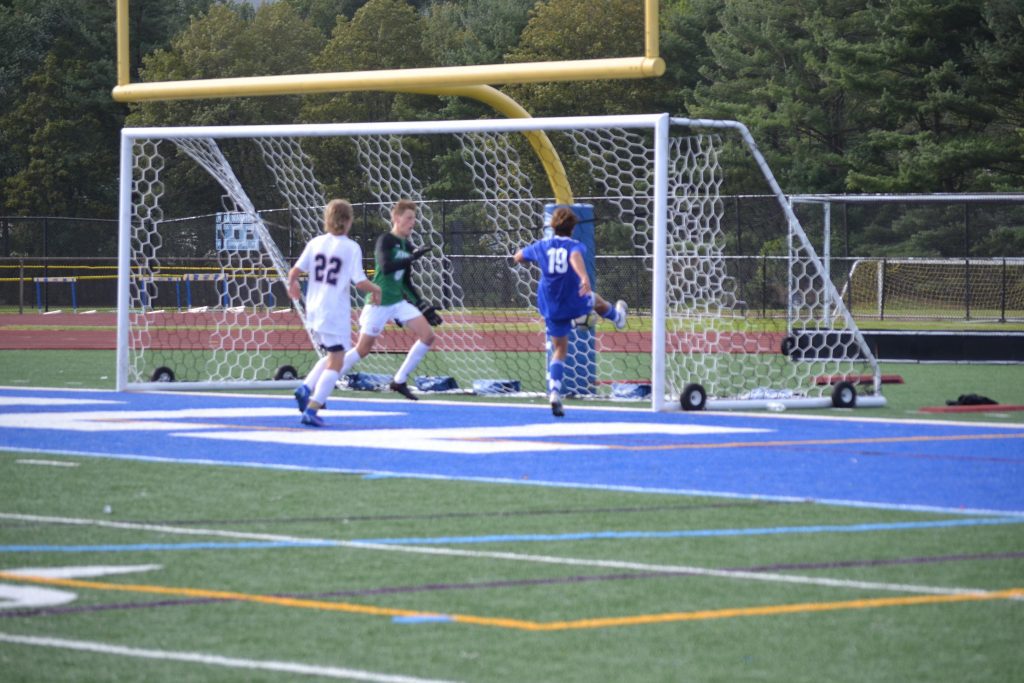 “We hit the post twice and the crossbar once,” said Seguro of his teams’ shots. “The effort was there from about 20 minutes into the first half to the end of the game.”

The start of the second half saw more of the same results for Hall. Less than 2 minutes in, Gabriel Sisk clanked a shot off the crossbar. A few minutes later, it was Avon’s Gonzalez calmly clearing away another solid Hall cross in the box, and moments later Hall’s Sam Sandler saw his shot deflect off a player and then the post before it was cleared.

At times, Avon had all 11 players packed at or inside the 18-yard box, making movement and passes almost impossible for Hall. Defenders Tiffany, Jack Magel, and Ryan St.Onge played a physical, tight-marking game, turning back countless Hall attacks.

Seguro lamented the bad fortune of his team, but knows it is just how the game goes. “This game is about finishing your chances and we didn’t today.”

Hall’s offensive possession was so dominant in the second half, that Warrior goalie Tyler Fairchild did not touch the ball for more than half of the period. 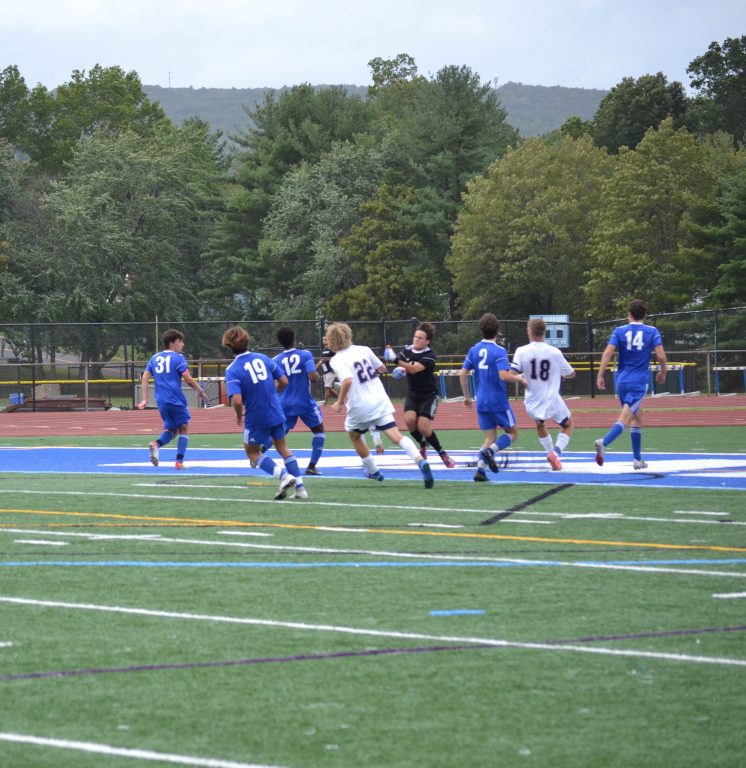 Hall’s luck finally turned with just over 8 minutes to go in the game. Senior midfielder Conlan Wilson struck the ball hard from outside the box, and it deflected off an Avon defender into the corner of the net to tie things at 1. It was a cruel fate for Avon’s Akers, whose positioning was spot on all day – taking most of the Hall shots straight into his chest.

The lesson in the tie according to  Seguro: better now than later. “I’d rather this happened to us now [in the season] and not in the tournament. It wakes us up and humbles us.” 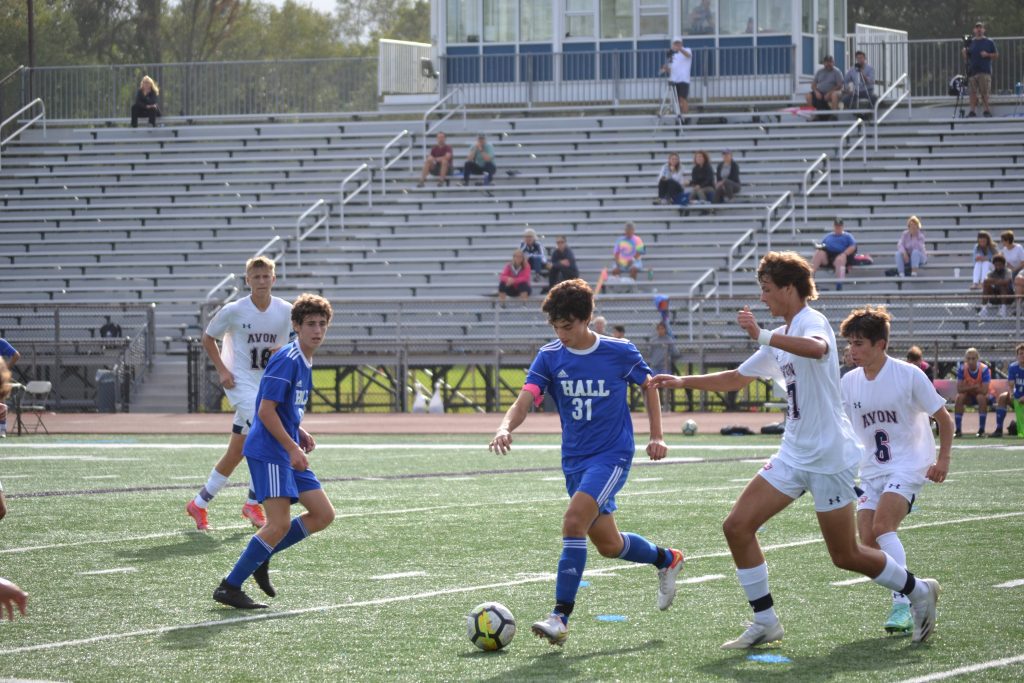 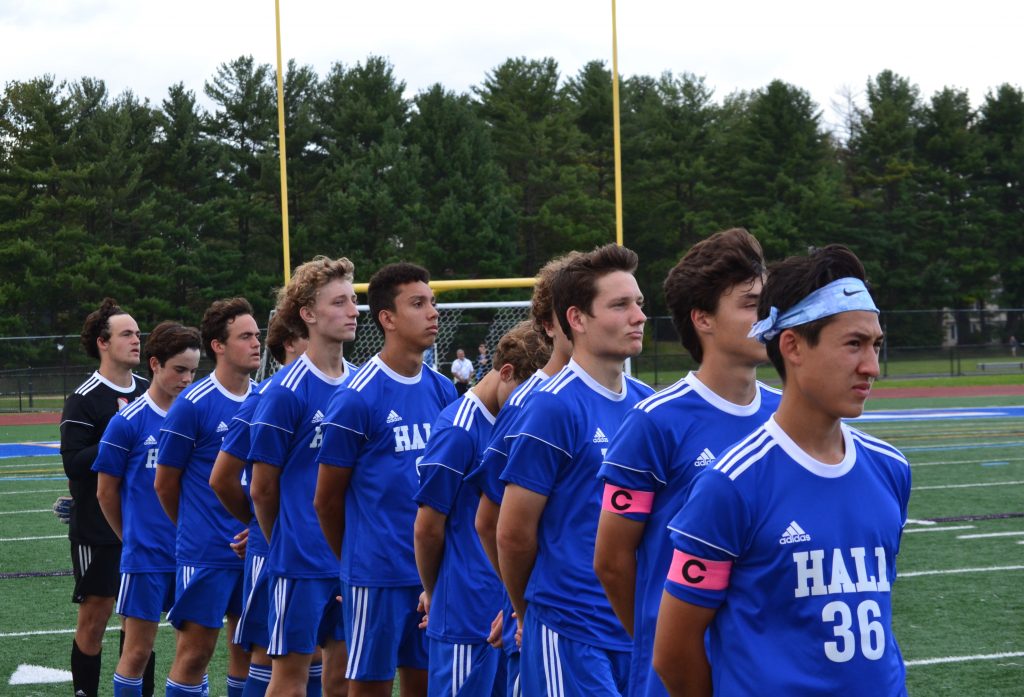