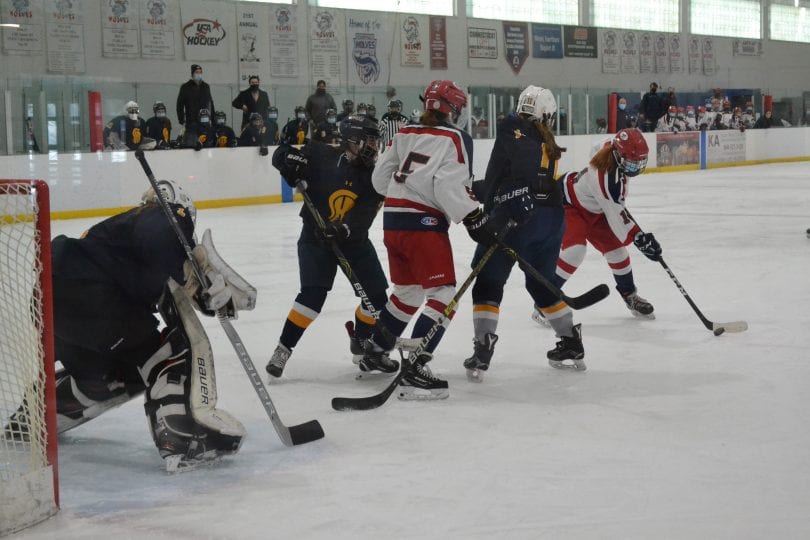 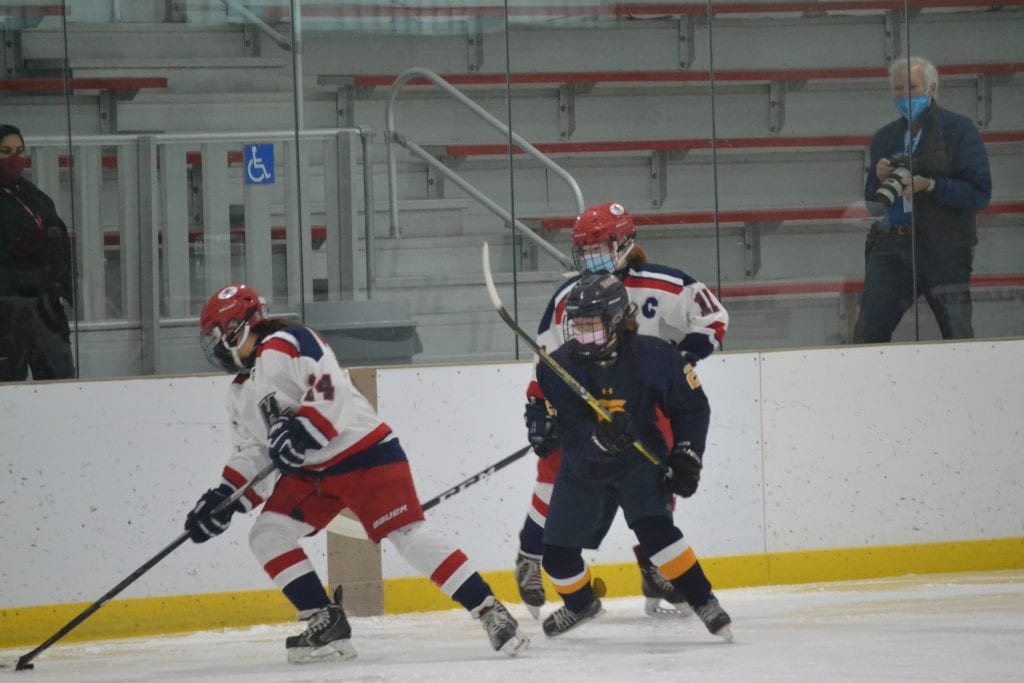 Coach Brett Soucy has been waiting for his Hall/Conard team to play a full game. On Saturday he got that, and a standout performance from a goalie who did not even play hockey until last year.

Unfortunately for the WarChiefs, they were facing one of the best girls hockey teams in the state in Simsbury. Soucy’s skaters played hard but, in the end, fell to Trojans 2-1.

“Today we played for three periods, and that’s what we need,” said Soucy after the loss. 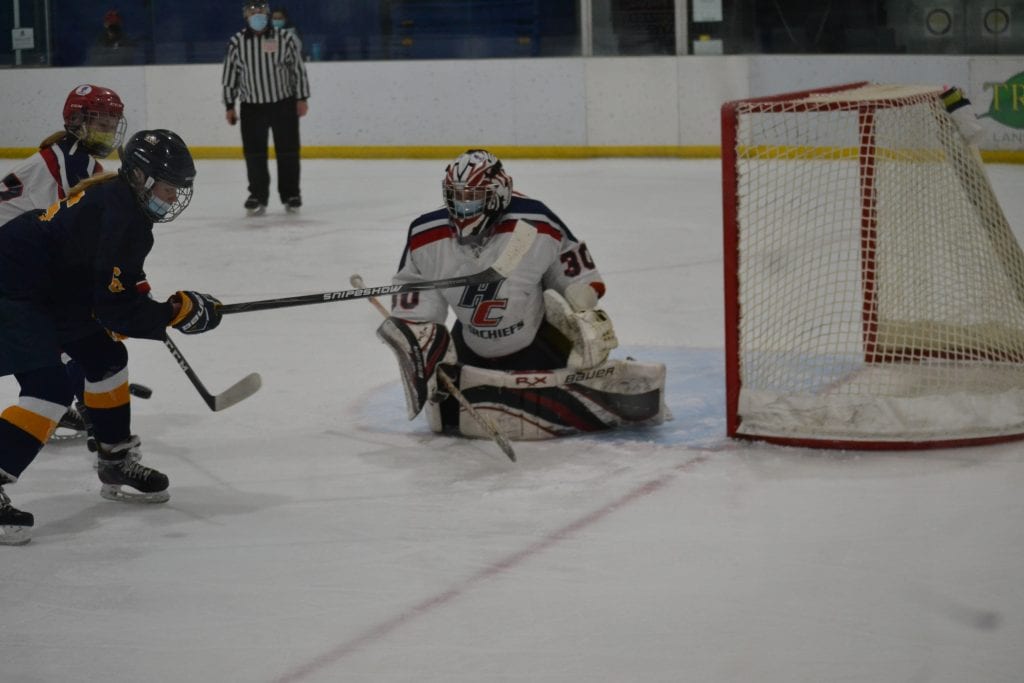 Hall/Conard’s Sofia Levesque with one of her 28 saves against Simsbury. Hall/Conard vs. Simsbury girls hockey. Feb. 20, 2021. Photo credit: Paul Palmer

The WarChiefs’ effort started in goal with sophomore Sofia Levesque – who turned aside 28 Trojan shots and kept her team in it. “I thought Sofia was just gold today,” her coach said.

It was the defense – especially co-captain Madeleine Levesque (sister of Sofia) – that kept Simsbury off the board early on. 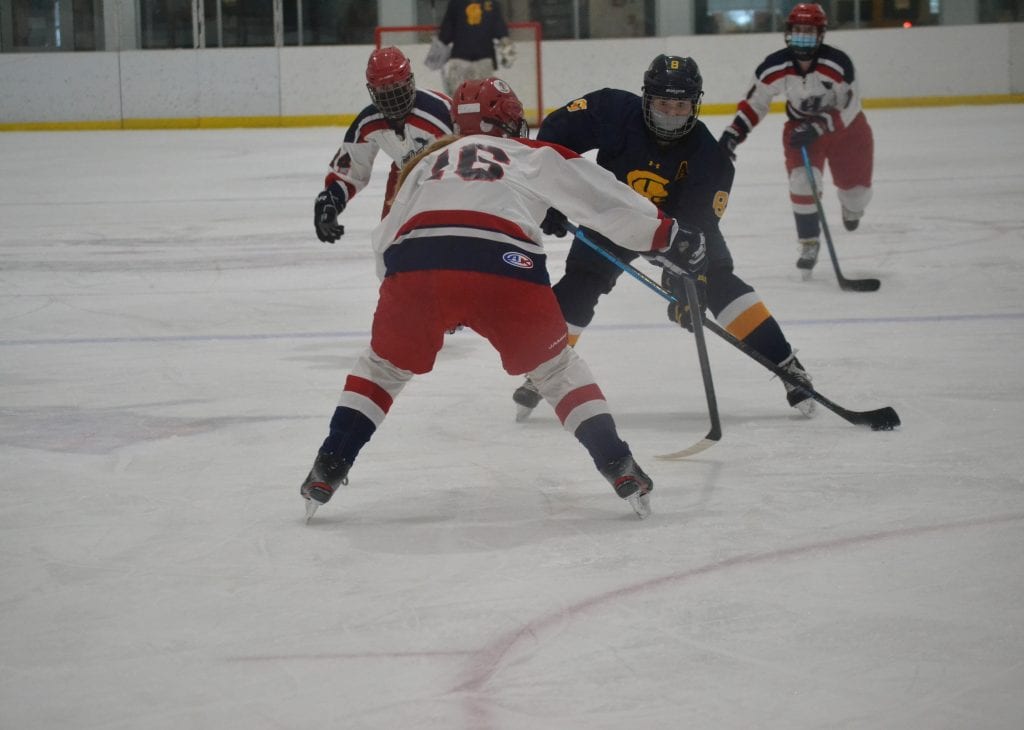 Sofia Levesque was particularly strong on a three-save flurry, including going post-to-post to stop a wraparound attempt, about halfway through the first. The WarChiefs nearly got their first goal about two minutes later when Grace Cho was denied on a should save by Simsbury’s standout goalie, Tori Lacroix. 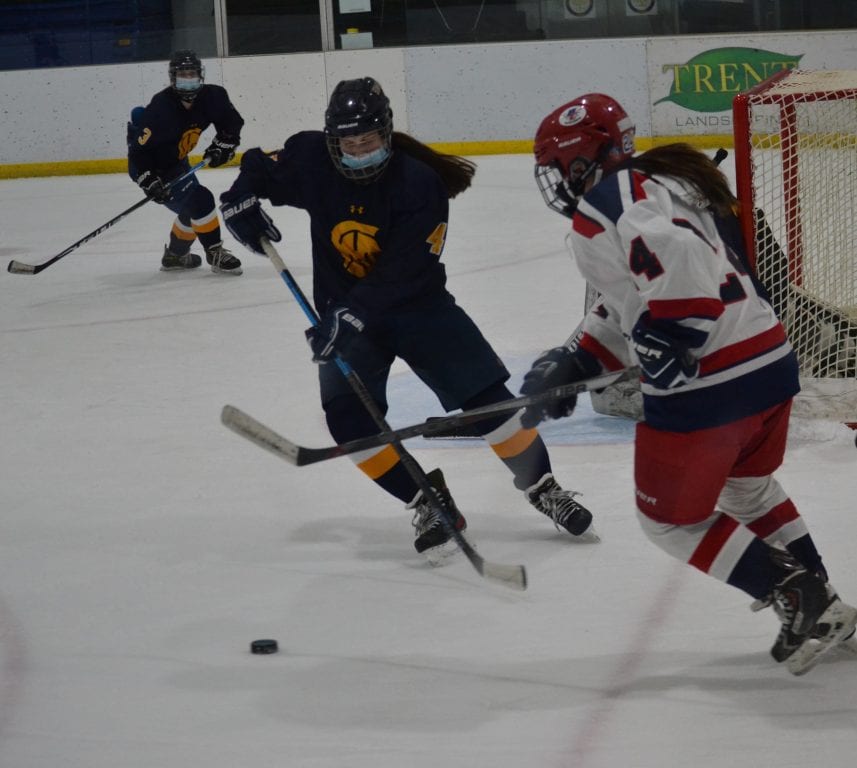 Four minutes later it was Sofia Levesque again denying the wraparound, this time from Thora Clark. It seemed the period would end scoreless, but with just :15 remaining, Simsbury’s Molly Walsh had her shot off a face-off trickle through Levesque and into the goal for the 1-0 lead. 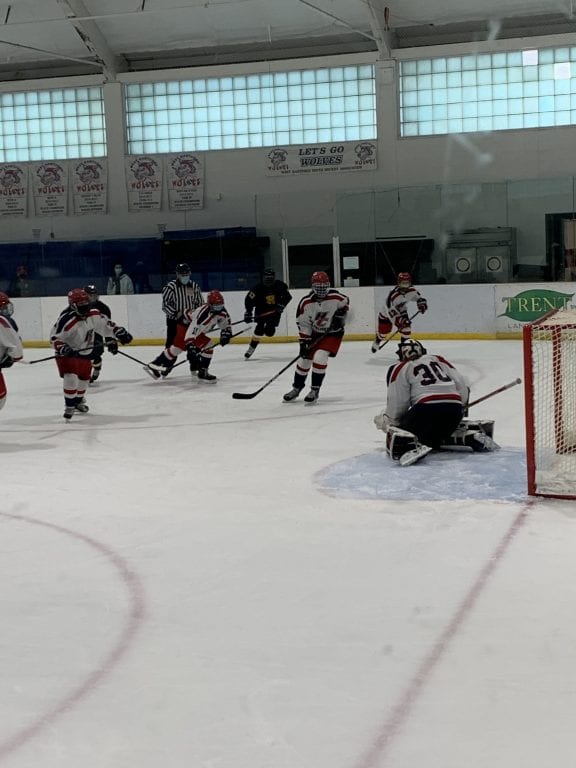 Early in the second period, Hall/Conard’s top scorer, Bridget McCann, nearly tied things – first with a tip in front that was neatly turned away by Lacroix and then a wrister that Lacroix handled.

Just three minutes into the period, it was Lacroix again coming up big with a pad save on Rosie McGowan’s shot from the point.

Then it was Levesque’s turn to shine in net as she denied Anna Kahl’s backhander and then shutdown Nicole Loftus when she tried to convert a Hall/Conard turnover. Just before the end of the second, it was Lacroix again deflecting a McGann shot over the glass to preserve the lead. 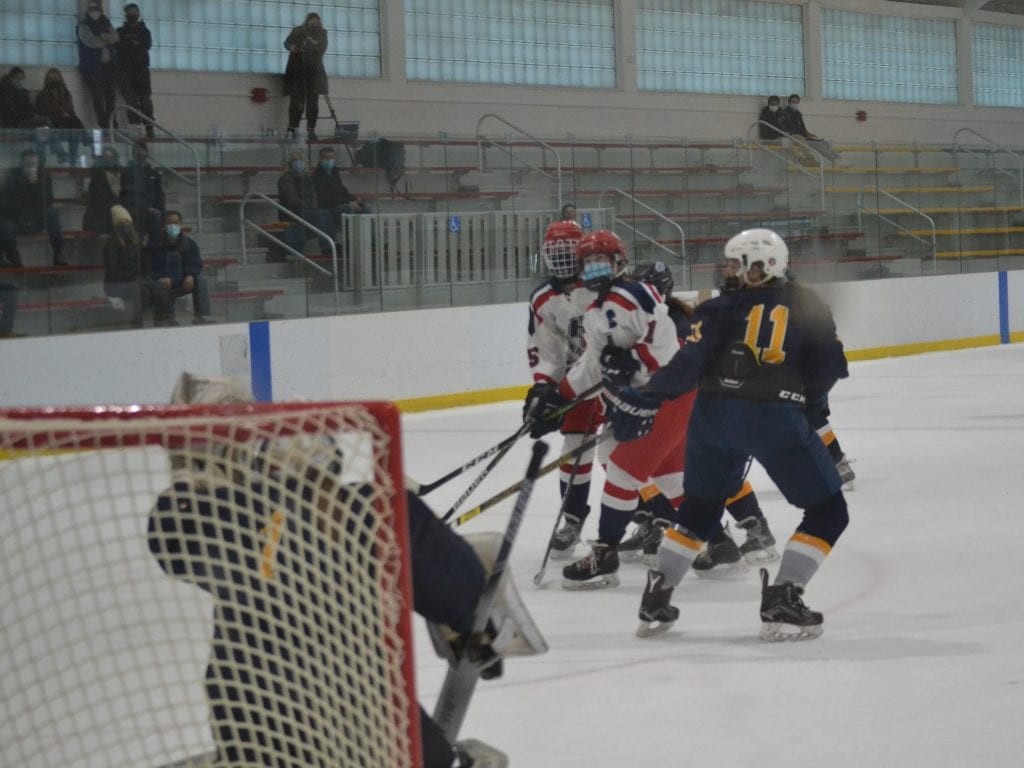 The Trojan defense was strong on its stick skills and quick to clear away any rebounds throughout the period. “They contest every shot and if you get around them, their goalie is rock solid,” said Soucy of Simsbury’s defense.

Simsbury would add to its lead just three minutes in the third period when Mackenzie Chapman forced a turnover behind the Hall/Conard net and found Clark in front for the goal. The Trojans had a chance to put things away when McGann was called for a crosscheck and put Simsbury on the power play at 7:25 of the third.

Simsbury kept the puck in the attacking zone, forcing Levesque to provide her best sequence of saves, stopping five shots in the first 50 seconds. The WarChief defense would hold strong and kill off the Simsbury power play and shortly after it ended, it was McGann feeding Annie Woods down low for a scoring try that was denied. 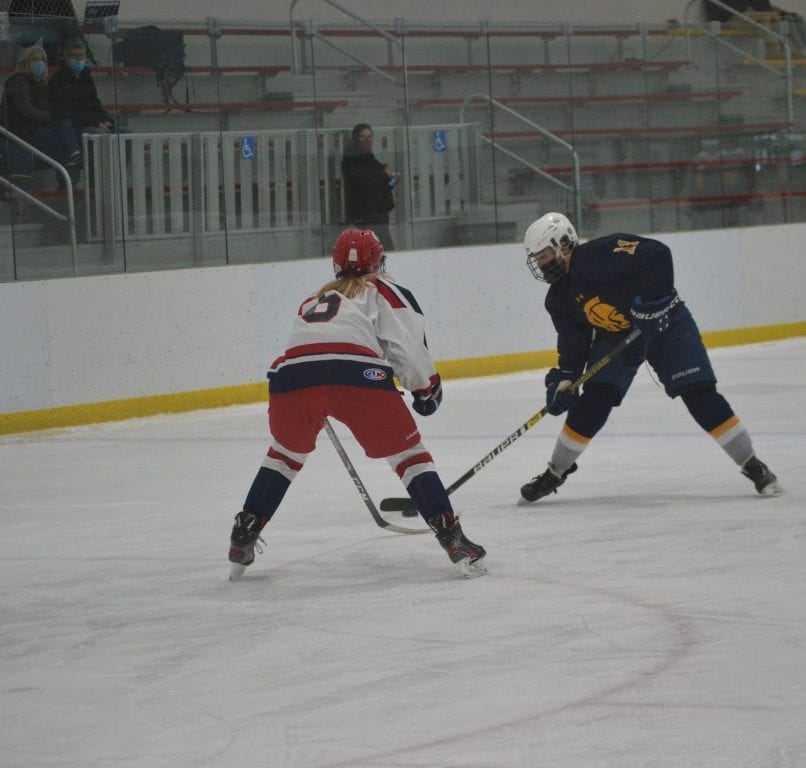 Woods got another chance almost immediately on a tip-in that was smothered by Lacroix.

With 4:08 left in the game, McGann would find the back of the net off a scramble in front of the Simsbury net.

The play began when McGann outhustled a Trojan defender to the puck and gained control in the attacking zone to set things up, with Woods and Emily O’Keefe getting the assists on the goal.

Hall/Conard’s best chance to tie things came with just :04 left in the game and the WarChiefs attacking with the extra skater after pulling their goalie, but Lacroix was able to find and control the puck in a tangle of legs and sticks in front of her net.

Simsbury moves to 4-0 on the season, while Conard falls to 1-3. The WarChiefs’ next game is Tuesday when they host Northwest Catholic at Veterans Rink in West Hartford. 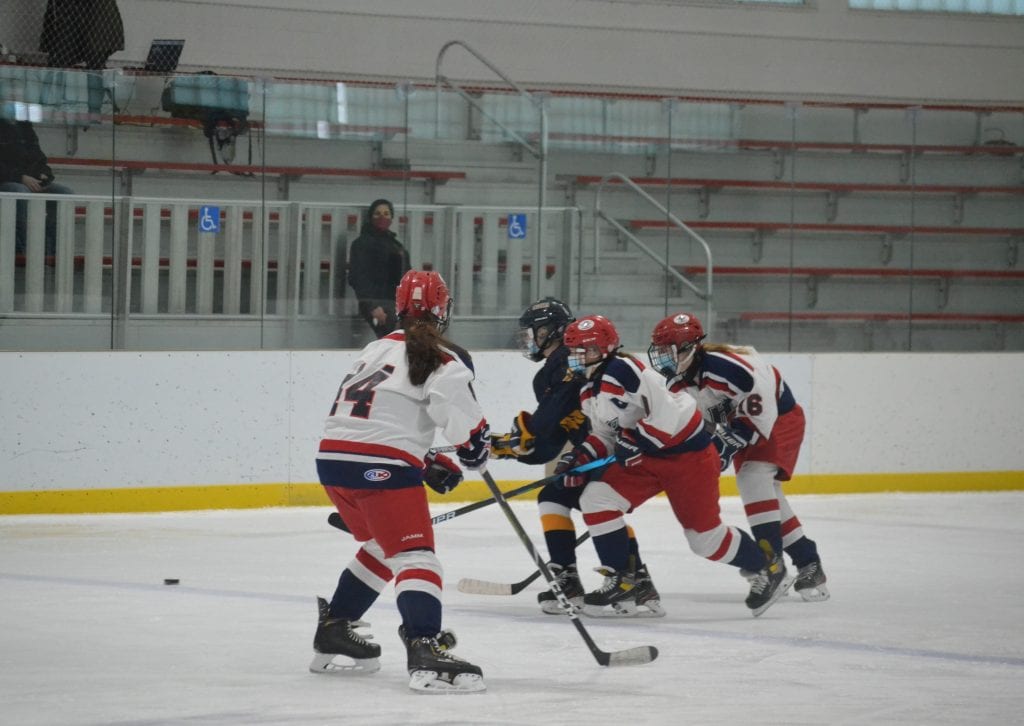 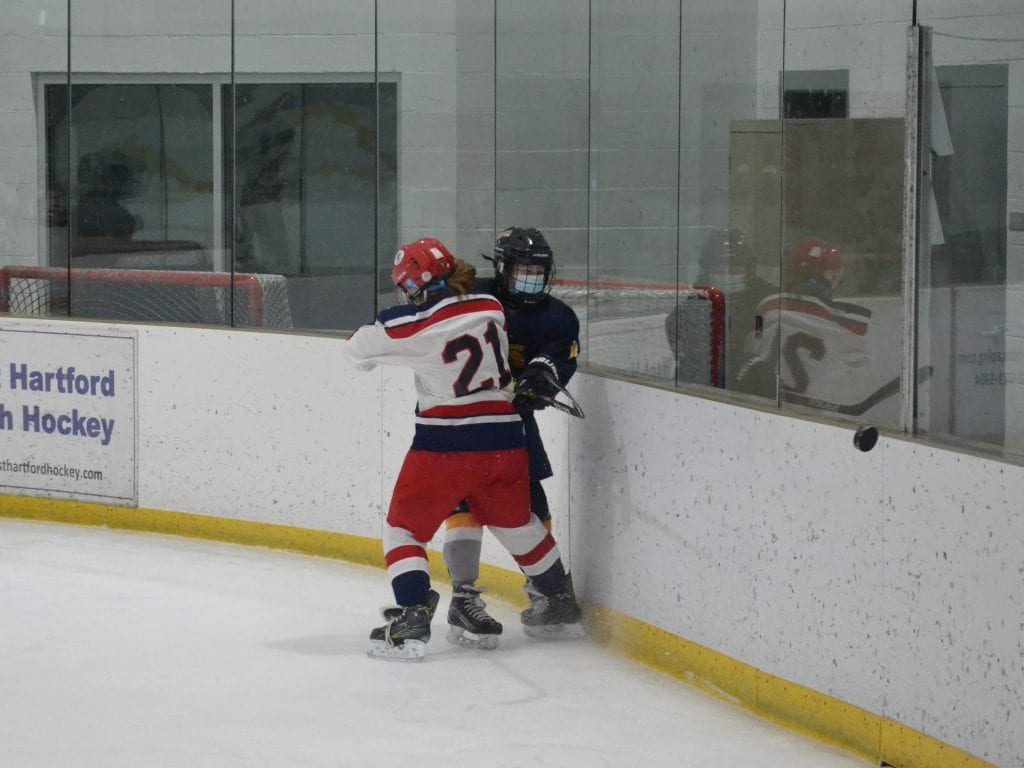 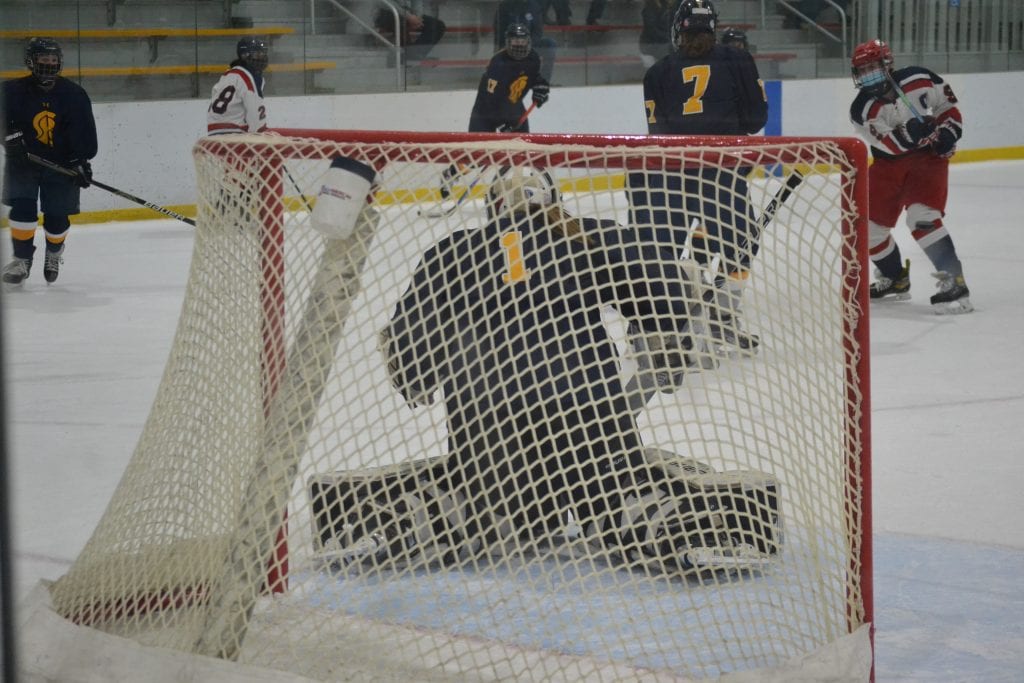