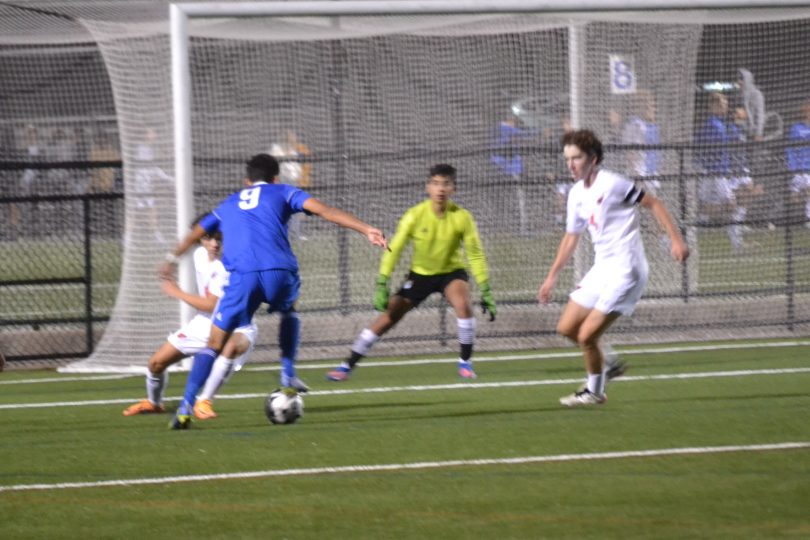 West Hartford’s Hall High School took on Greenwich on Saturday evening in the FCIAC vs. CCC Challenge Cup at FSA in Farmington. 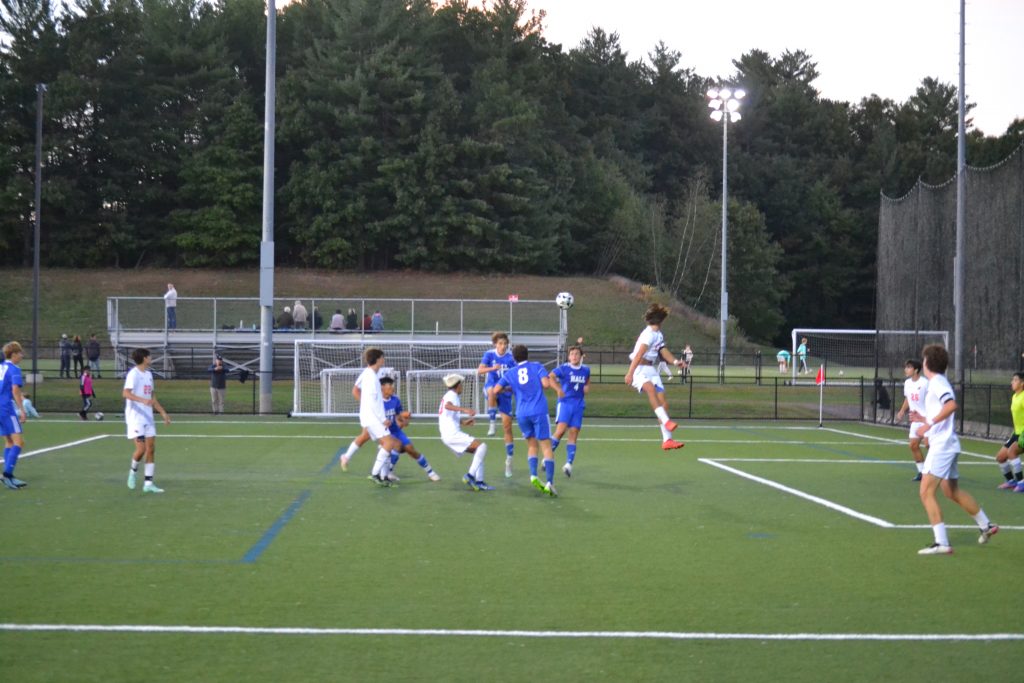 If you want to test your team, most coaches agree the best way is to play the toughest teams you can.

Teams from the Fairfield County Interscholastic Conference (FCIAC) and from the Central Connecticut Conference (CCC) have won 15 of the last 16 Class LL boys soccer titles and six times the two conferences went head-to-head in the championship game. This weekend the two conferences met for measure across multiple games in the inaugural FCIAC/CCC Challenge Cup.

Saturday night Hall proved why it belongs in the conversation again this year for the state title, as the Titans dominated the Greenwich Cardinals in a 5-0 win.

“We are trying to grow,” said Hall coach Zeke Seguro. “I’m excited about our journey.”

Hall came into the game unbeaten, having won three of its first four games – with the other being a tie with defending state champion Farmington. Saturday night, Greenwich had the early jump as the Cardinals controlled the midfield and most of the ball possession. It nearly paid off when Max Ferrario beat Titans’ goalie Tyler Fairchild to a loose ball, but the sprawling goalie forced Ferrario off his angle, and the shot went wide. 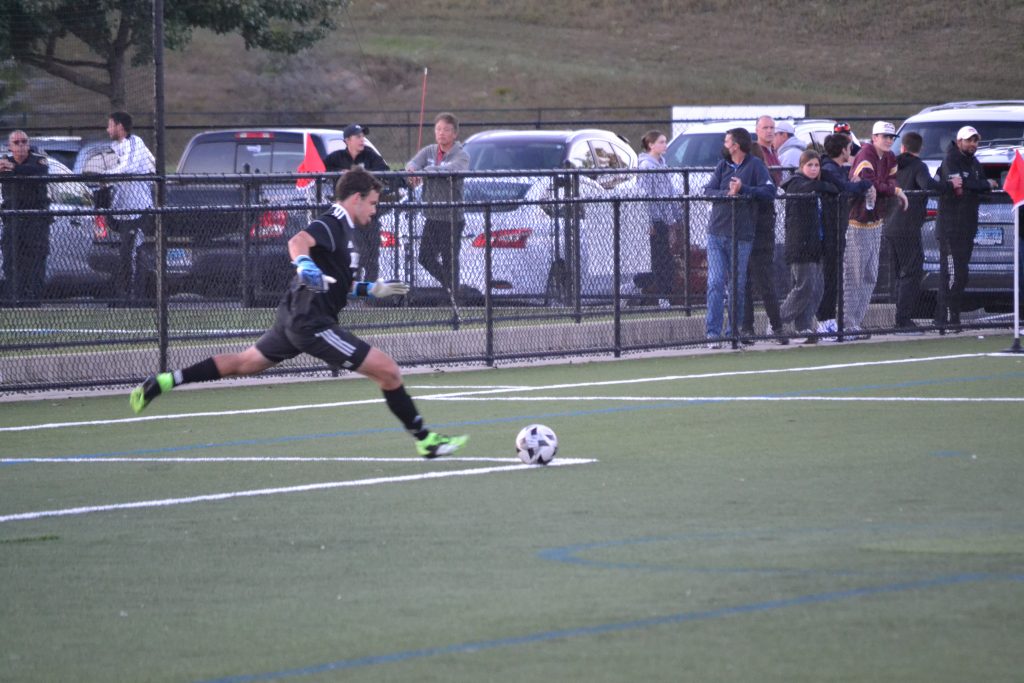 Hall would respond minutes later when Sam Sandler’s long ball into the Greenwich box went right to a teammate. But an unfortunate bounce of the ball off the Hall player’s hand resulted in a turnover.

Hall’s leading scorer, Lucas Almeida, did not enter the game until about the 15-minute mark. Seguro said they wanted to see how Greenwich was playing and how Almeida could exploit it. The plan seemed to work, because once the UConn commit entered the game, the Titans picked up their game.

Sandler used Almeida as a decoy on a corner kick, drawing out two defenders before delivering a perfect ball into the middle. Jack DeLoreto rose above the crowd and drove it into the back of the net with his head. “It was a rough start,” Seguro said. ”They closed down very well and it was a frantic pace, but we grew into the game.” 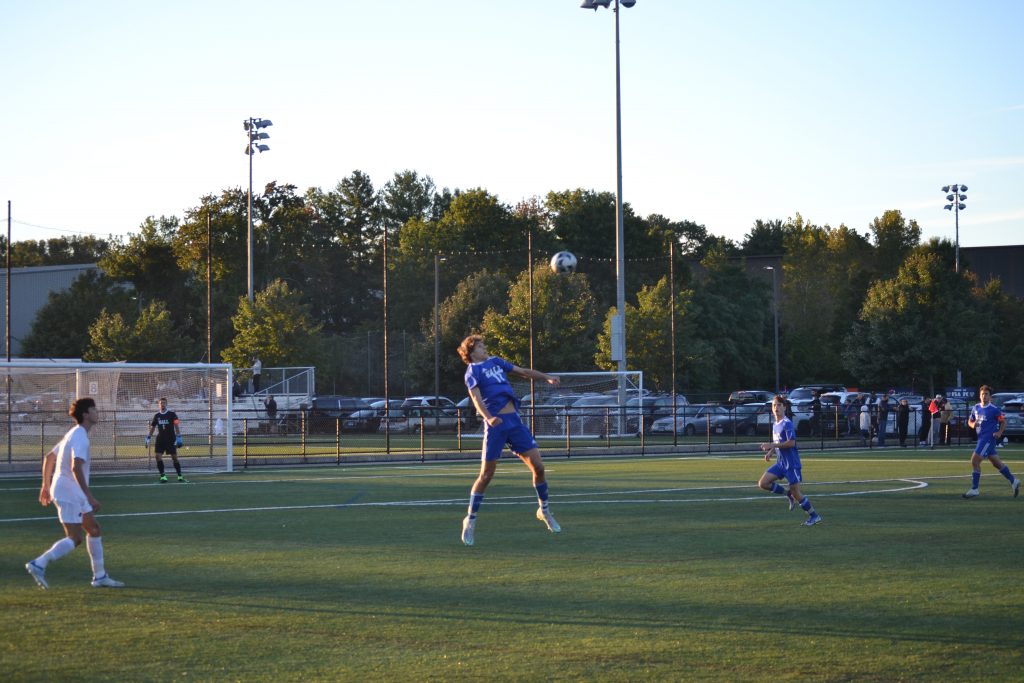 Greenwich (3-3-1) had its opportunities, especially on the counterattack, but Fairchild and a backline of Thomas Nash, Colin Fairchild, and Deloreto worked well together to shut down the chances from the Cardinals.

Up front, Almeida was a target for the Titan offense, and it paid off again. Sophomore Fareed Aburabia found Almeida on the transition. Almeida squared to an unmarked Gabe Sisk at the top of the box. With the Greenwich goalie coming out to cut the angle, Sisk let go with a blast that could only be knocked down as the keeper fell backwards. Sisk calmly recovered the rebound and drove it into the far side of the goal for the 2-0 lead. “Fareed has made huge strides,” said his coach. “Lucas set up a few guys really well,” he added.

Hall took the 2-0 lead into the intermission and came out strong again in the second half. Almeida started the play again, this time streaking down the left side and taking a shot that was saved. The rebound went right to Aburabia who drove the ball home for a well-deserved goal.

The goal of the game would come next, and once again it was Almeida. The senior All-State forward chased down a long ball down the left side, split two defenders just inside the 18 yard line, dribbled past two more, and delivered the goal to make it 4-0 for Hall.

Late in the game, Sandler would bang in a long rebound for the Titans to close out the game’s scoring at 5-0.

“This game will give us a better indication of what we need to improve on,” Seguro said after the game. “We have eight games against the top 10 teams in the state on our schedule.”

Hall’s defensive efforts should get even better when senior back Quinn LaRock returns from injury. “Right now, our backline is sort of makeshift,” said Seguro.

On the season Hall (4-0-1) has allowed just four goals in five games while scoring 17. Hall has home games with Southington (Wednesday) and Tolland (Friday), and a road game at Avon (Monday) before hosting the return match with Farmington on Oct. 6. 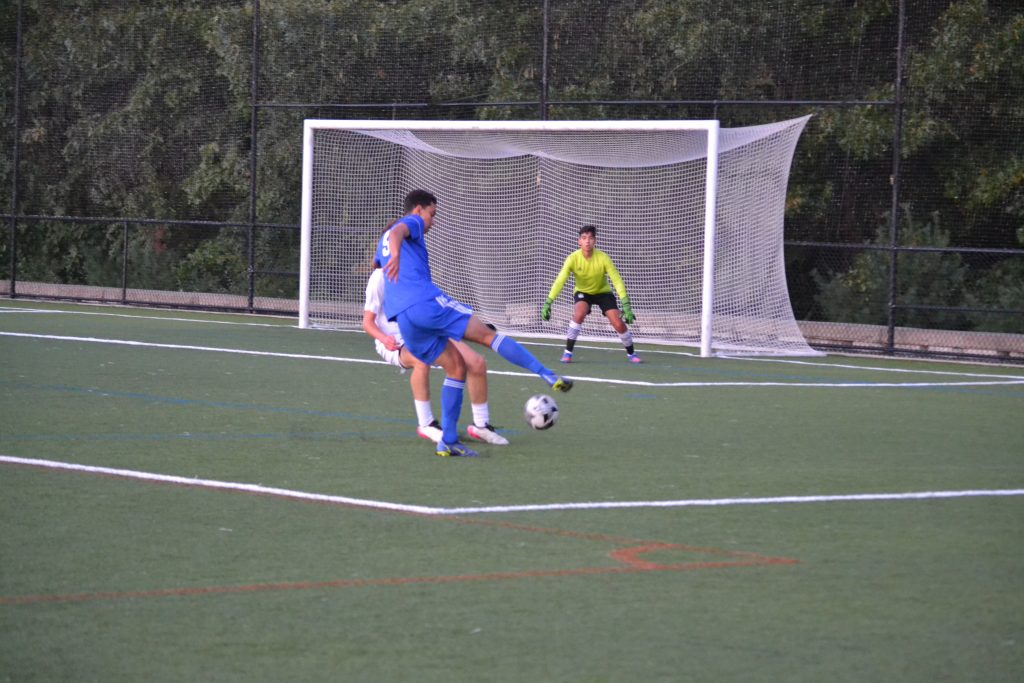