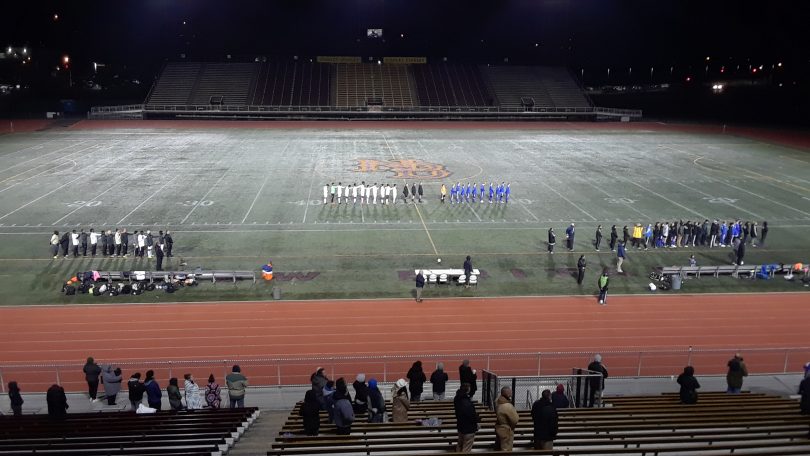 Zeke Seguro has waited nearly a quarter century to be in this position.

With a 2-0 win over No. 19 East Hartford in the CIAC Class LL semifinals at Veterans Memorial Stadium in New Britain Wednesday night, the No. 2 Hall High School boys soccer team will represent West Hartford in the state championship game against defending champion No. 8 Glastonbury on Saturday.

The Warriors will make their first state title appearance since 1983. (They last won in 1980.) For Seguro, who has coached Hall for the last 24 years and made the state semifinals six previous times, earning a spot in the championship game is nothing short of a special moment.

“This is my seventh final four and we finally got over the hump,” Seguro said. “Trust me, it feels absolutely great, but we still have one more.”

Matt Azia scored first for Hall – tapping in a shot by Charlie Cubbage amongst a scrum in the box after a corner kick – to put the Warriors ahead 1-0 with 11:39 remaining in the first half.

The Warriors built momentum with a slew of opportunities that either East Hartford deflected or Hall failed to connect on. One shot hit a post and bounced out on a nearly wide-open chance in the box about halfway through the first half.

Later in the match, Enrik Pretashi put Hall up 2-0 on a header off a corner kick with 25:04 left in the second half.

“If you don’t put chances away – as I keep saying – they can come back to bite you,” said Seguro. “We were fortunate to finish on set pieces. That’s all we worked on yesterday, and actually, it paid off. It was well worth the one hour of set pieces that we worked on.”

With more breathing room after the second goal, the Warriors looked to protect their advantage in the waning minutes.

“I’ll take two versus one,” said Seguro. “I thought it definitely put us in more of a comfort zone. We went to two defensive [midfielders]. We sat back a little bit. We tried to kill that game, and as a result, they had some pressure on us the last 10 minutes.”

Hall will face Glastonbury on Saturday at 10 a.m. at Veterans Memorial Stadium. While Glastonbury is a lower seed in the tournament, the teams appear to be evenly matched heading into the final.

The Warriors and Tomahawks played to a 1-1 tie in the regular season on Oct. 16. Neither team has allowed a goal this postseason, as the two clubs have outscored their opponents a combined 24-0. Glastonbury defeated No. 12 Pomperaug 5-0 in the early semifinal game to earn its spot in the final.

“Glastonbury is a great team,” he said. “We played them earlier in the year. It was a great [high school soccer] game, and we’re just so grateful to have that opportunity to play one last game in the final.”

[Editor’s note: This story has been updated. An earlier version attributed the first goal to Cubbage.]