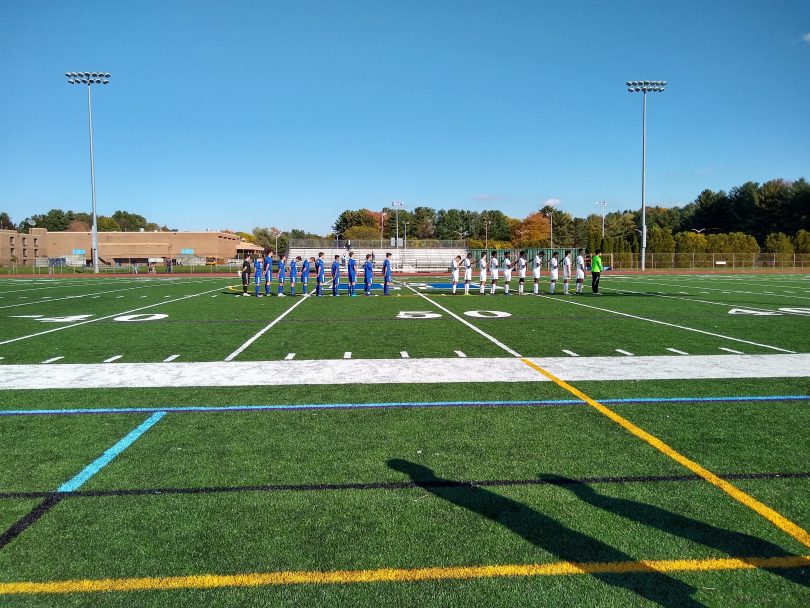 Hall scored twice in the second half to force a tie with local power East Hartford.

The Warriors and Hornets – the No. 4 and No. 1 teams in the Class LL rankings, respectively, entering the contest – played to a 2-2 tie in what Seguro called a “late tournament game” Monday afternoon in West Hartford.

“This was definitely right up there [with] Glastonbury,” said Seguro. “[East Hartford] presented different problems than Glastonbury did. I thought they were good. They were hard to get in behind – even though we did get in there a few times. All in all, they were pretty good.

“I’m happy because we had enough chances to come away with the victory. We just gotta now finish the chances, and today we probably could have had four (goals).”

Evan Jones scored for Hall (8-1-1) with 10:42 left in regulation to force overtime, but neither side could find the net in the extra 10 minutes. Under a minute into the second overtime, Jones dished the ball to Drew Seguro, but the close-range shot went right at East Hartford (9-0-1) goalie Julio Argueta for one of his 17 saves.

The Hornets sailed two shots over the Warriors’ net in overtime, including a chance with 1:40 remaining. The Warriors, meanwhile, sent a shot over the net with 17 seconds left in overtime.

“I thought it was a pretty even game,” Zeke Seguro said. “I thought maybe we had a few better chances in the second half. We just didn’t do anything with them. … We grew into the game. I thought they started better than we did, and I thought as the game went on, we got better in terms of our performance.”

Both teams applied pressure offensively early on, but Emmanuel Ofori put the Hornets up 1-0 on a free kick goal at the 15:34 mark. Seguro said the team’s lapse in judgment led to the opening goal.

“The first [goal], that’s on us,” Seguro said. “There’s no way we allow them just to get a free shot into the goal. Our kids thought that by the referee coming over, there was going to a be a whistle. No, the ref has to say, ‘On my whistle.’ Much respect to Ofori. He saw it; he put it in. We need to learn that you cannot just all of the sudden assume that you’re going to get a whistle.”

Hall looked to created opportunities in the final 10 minutes of the first half, but East Hartford thwarted chances defensively to keep a 1-0 lead heading into halftime.

The Warriors attacked quickly to start the second half, drawing three consecutive corner kicks in the first three minutes. After a give-and-go between Drew Seguro and Jones off a corner kick, Jamie Cowan sent a rebound shot into the net to tie the game for Hall at the 37:26 mark.

Jones hit the Hornets’ post on a potential go-ahead goal minutes later, while Hall goalie Max Kalsner Kershan made a save at the other end to stop East Hartford from taking the lead.

Rajay Robinson beat a Hall defender to the ball and squibbed it into the net as the defender and Kalsner Kershan collided to put East Hartford up 2-1 with 21:18 left in regulation before the Warriors’ late equalizer.

The Hornets received two yellow cards as they imposed a physical presence throughout the game. Despite the chippy play, Zeke Seguro said he didn’t want his team to overcompensate their skill to match the physicality of their opponent.

“We don’t want to get into that kind of game because we’re not that kind of team,” he said. “But we have to understand that, as we go into the state tournament, there’s gonna be teams … [that are] very physical, so this was a great learning curve for us.”

The Warriors face another tough test as they travel to Farmington (6-3) Friday night.