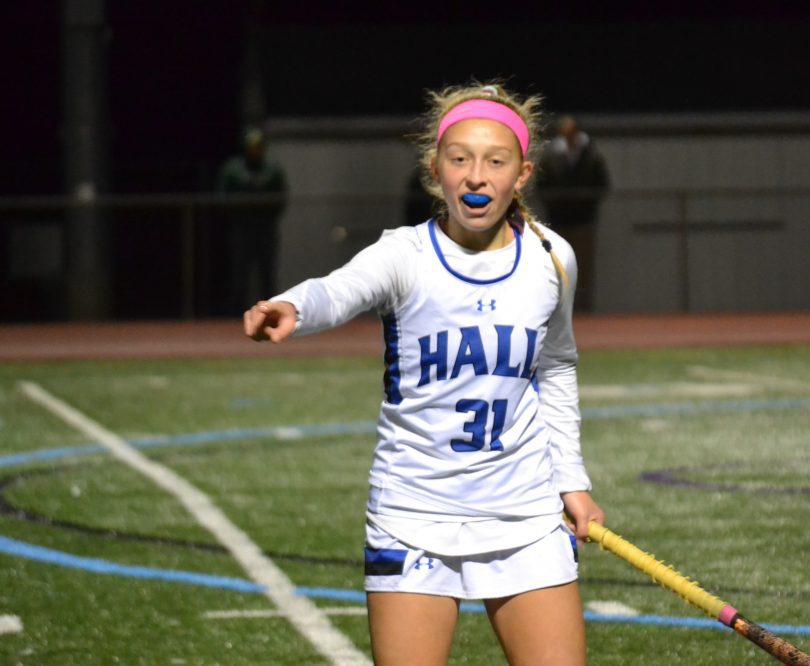 Hall hosted Trumbull in West Hartford in the first round of the Class L field hockey tournament. 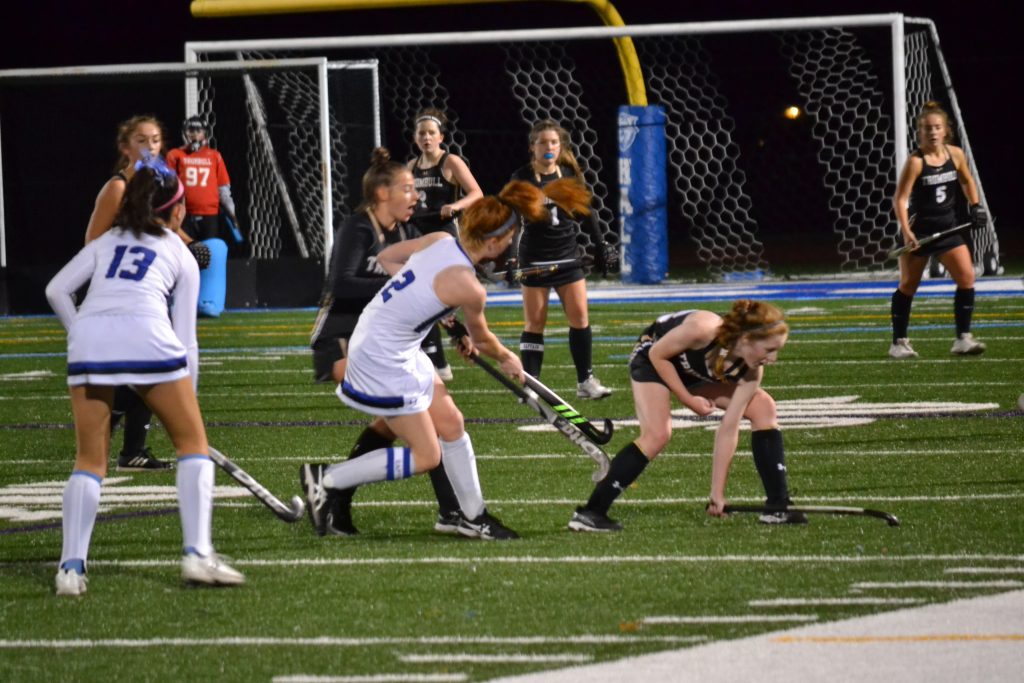 The Warriors came out of the gate flying and within two and a half minutes had the lead. Sophomore Ellie Goldstein – who netted 30-plus regular season goals – used a powerful backhand shot to put her team up 1-0.

Trumbull responded with a sustained attack that saw Hall goalie Addie O’Connell come up big on four good shots from the Eagles. The last two in the series came off the stick of Maura Carbone who found herself alone in front but could not beat O’Connell who came off her line to challenge. 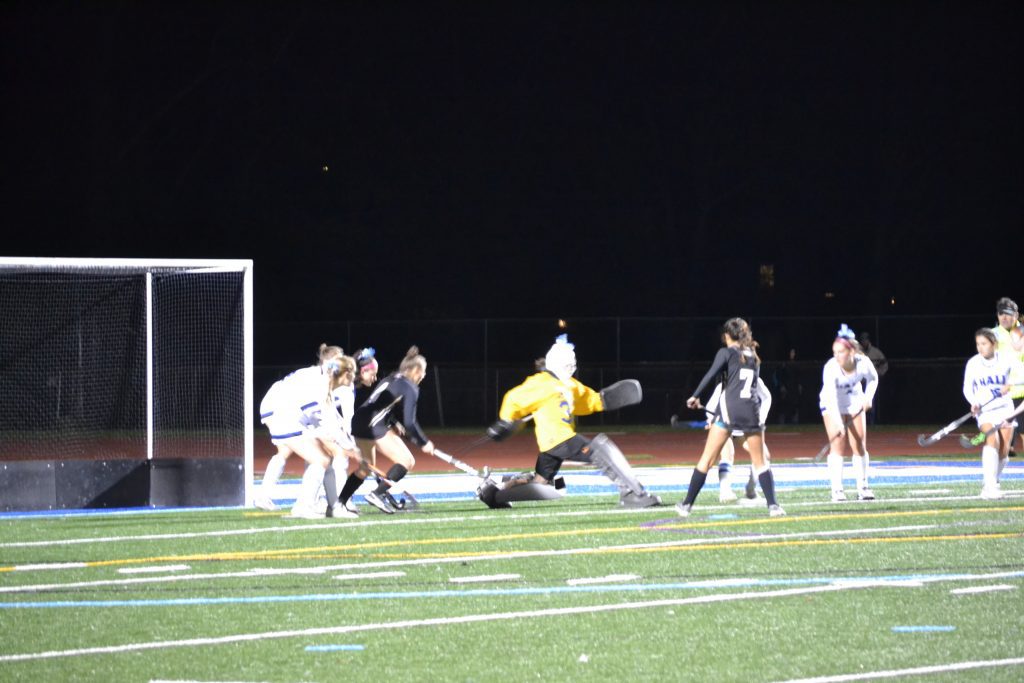 “It  throws you for a loop,” said McConnell of the sustained pressure by Trumbull. Hall’s defense had limited the shots that got through to their goalie during the regular season. “I knew they were’ gong to be tough, but I love the action,” O’Connell added.

Just under 6 minutes into the game it was Goldstein scoring again when she ripped a backhanded shot that was stopped, but she knocked home the rebound. 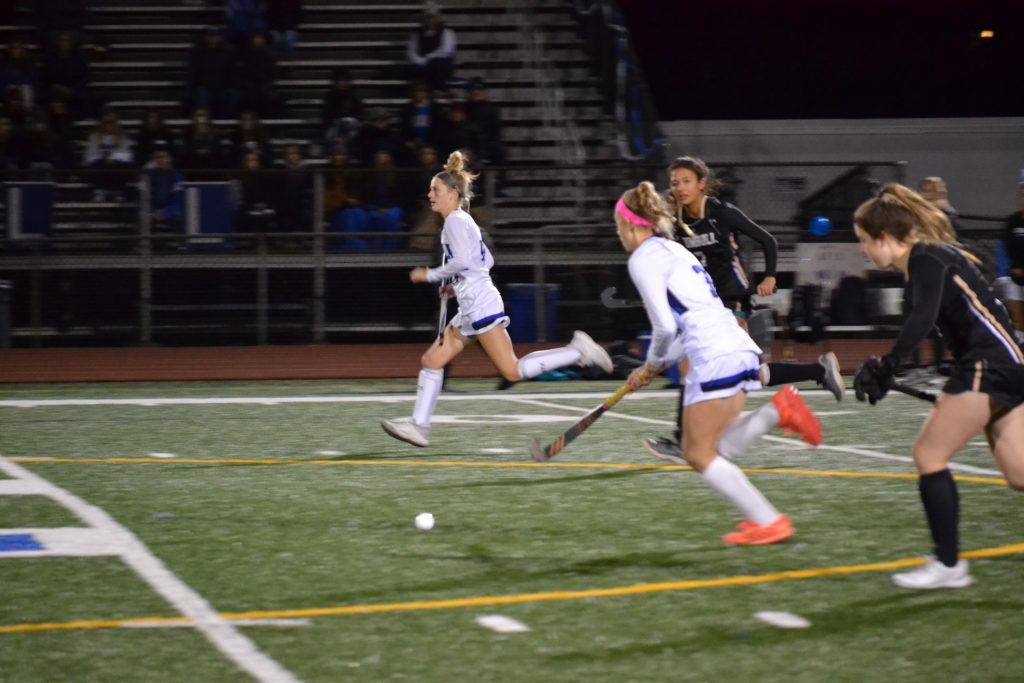 The sophomore would also have a hand in the Warriors’ third goal of the night. She took the ball, stick handled around a pair of defenders, and sent a pass to her right to teammate Emma Keller. From a bad angle off to the side of the goal, Keller let a shot go and it managed to sneak by Trumbull goalie Jennifer Flynn, and it looked like Hall was well on its way to win No. 15 on the year … but Trumbull had other ideas.

The Eagles would score their first of the night just under 2 minutes into the second period. It started with a penalty corner for Trumbull. One of the Hall defenders left early, so they were down to just a goalie and three for the runout to try and stop the attack. After an initial stop, the loose ball was knocked into the Hall net and its was 3-1. 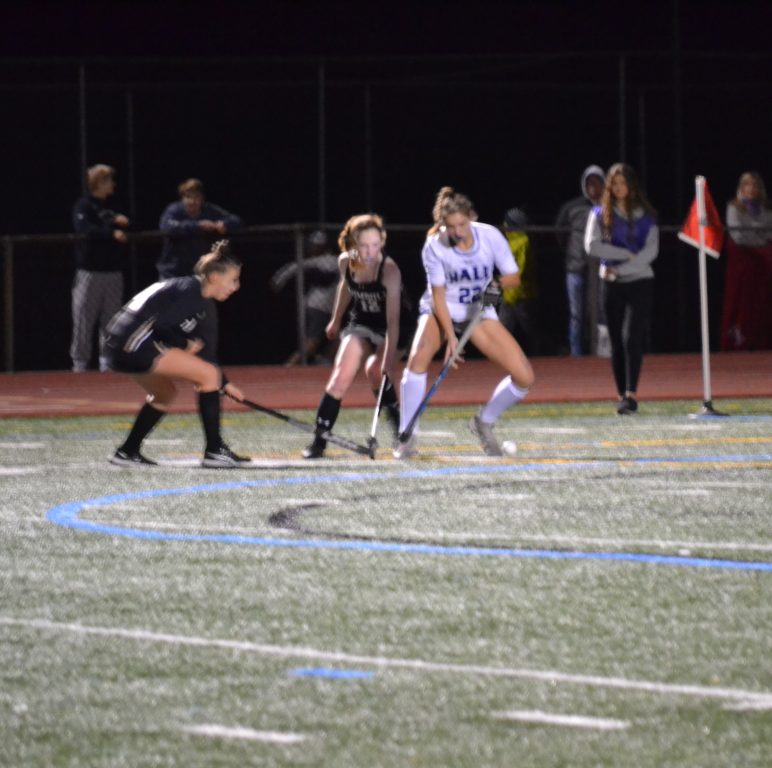 “We expended a lot of energy in that first quarter, and they kept competing,” said Hall coach Jenna Behan. What her team needs to do is balance that energy throughout the game, she said.

A re-energized Trumbull team came out flying in the third. Once again it was O’Connell who was the difference-maker – first stopping Carbone once again from in close on two chances.

Then it was Alexandra Santoro being denied on her bid off a penalty corner.

The Eagles might have had better chances if not for the play of  senior defender Brooke Martindale. She easily glided from side to side and back towards her own net on several plays to snuff out the opposition.

She and O’Connell seemed to have their communication down to a science. “We have progressed a lot,” said O’Connell of the teamwork she has with Martindale. “We really are on the same page now,” she added.

Said Martindale of her ability to freelance on defense, “I know my teammates have my back, and they are great communicators.” 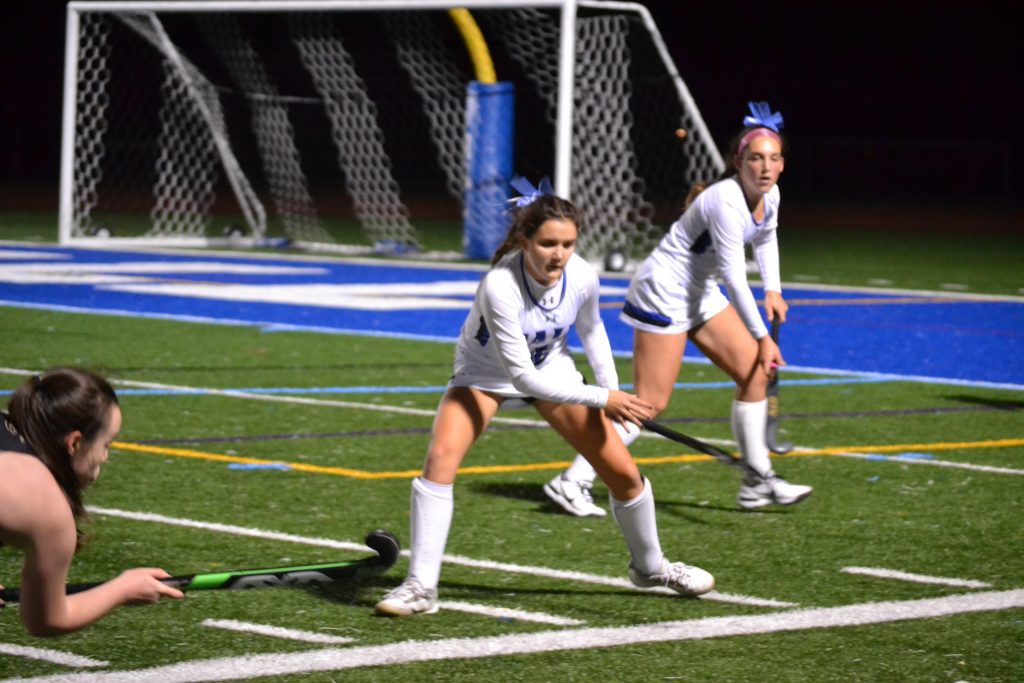 With Hall holding the two-goal lead entering the final 15 minutes, both sides pressed their attacks. Goldstein and senior Bridget McGann used their strong stick-handling skills to move past defenders and setup chances, but the Warriors could not find the back of the net. On the defensive side, it was Martindale and the rest of the Hall backline doing yeoman-like work.

Especially effective in getting the team out of danger was the combination of the “M&M’s” – Martindale and McGann. McGann seemed to always be there to give Martindale the outlet passes to ease the Eagles pressure.

“She’s a mind reader,” said Martindale of McGann. “Her stick skills are unbelievable, and she is great at cutting in and out and finding an open space I can  pass to.”

With four-and-a-half minutes to go, Trumbull would cut the Hall lead to just one when Lyndsey Guzzetta’s shot was tipped in front by Carbone. The goal came off yet another penalty corner that the Eagles had in the game. 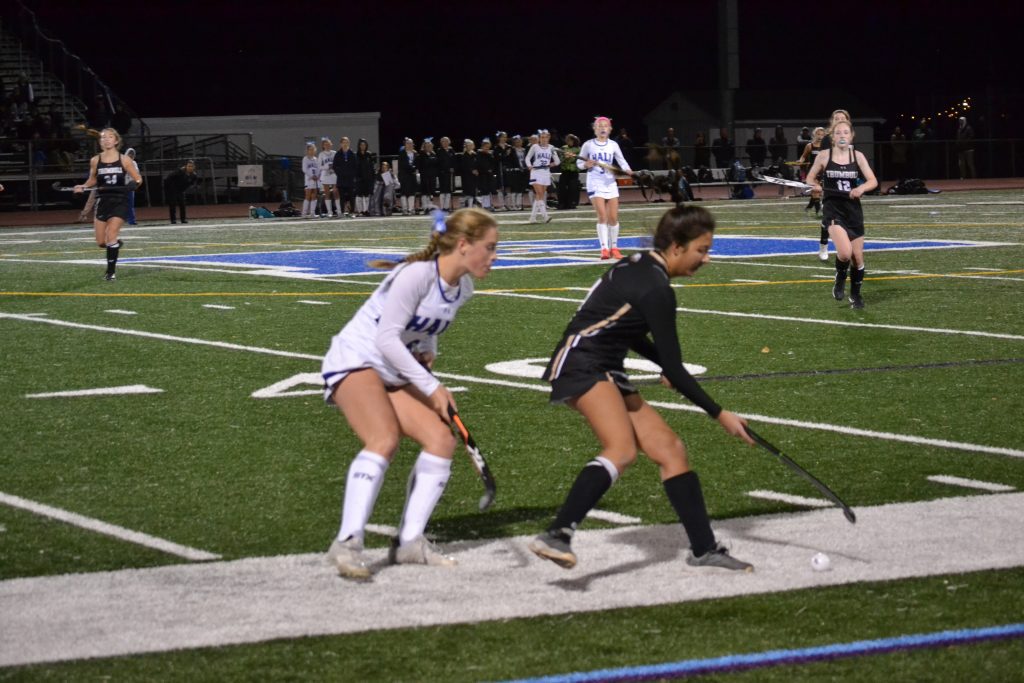 Hall was able to run out the clock when they were awarded a penalty corner with just under a minute to play, and the pressure was not relieved by Trumbull until there was under 10 seconds to play.

“My captains passed the message down to their teammates that this would be one of the best teams we have played all year,” said Behan. Her No. 3 seeded team now hosts Wilton, a 1-0 winner over Staples, on Friday night at 6 p.m. in the Class L quarterfinals. 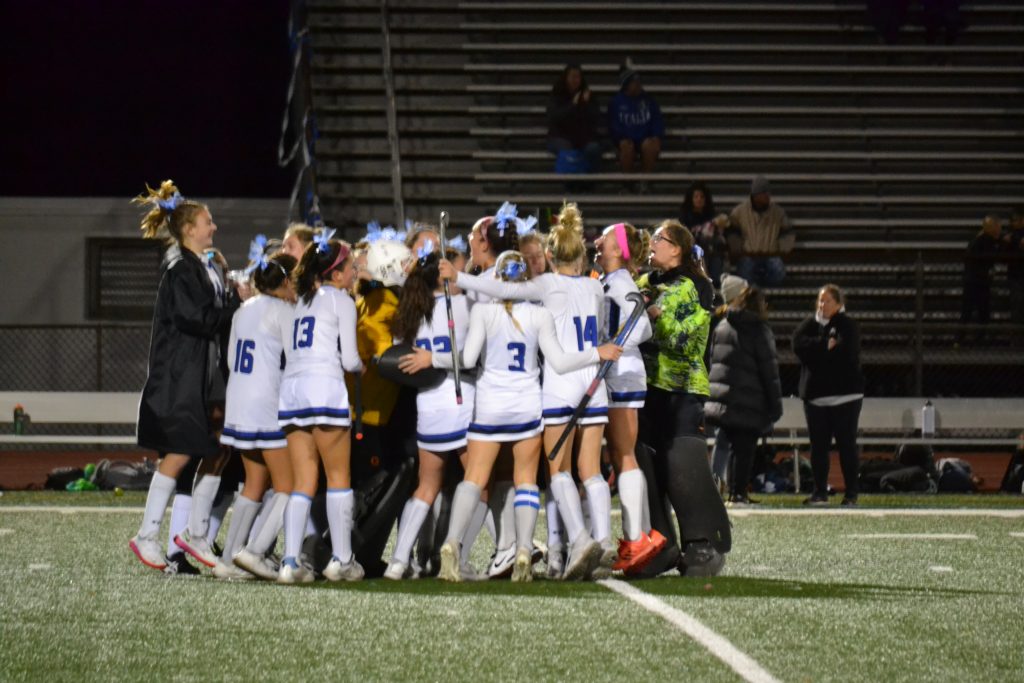