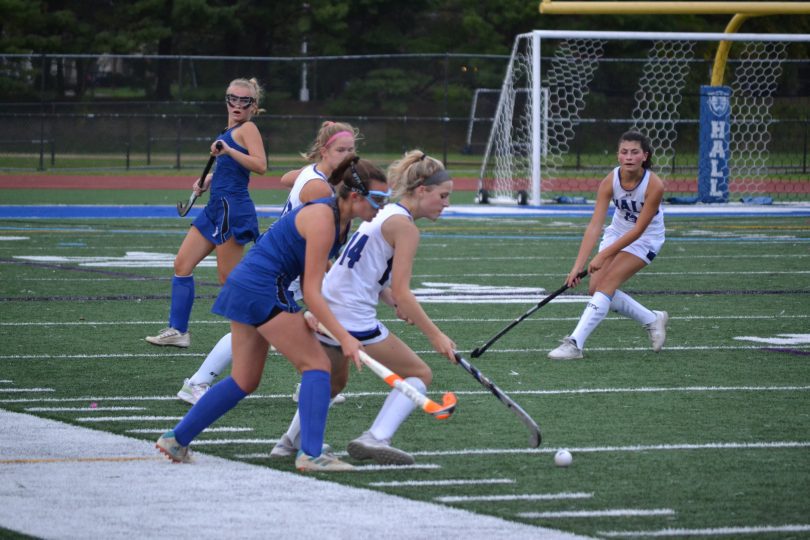 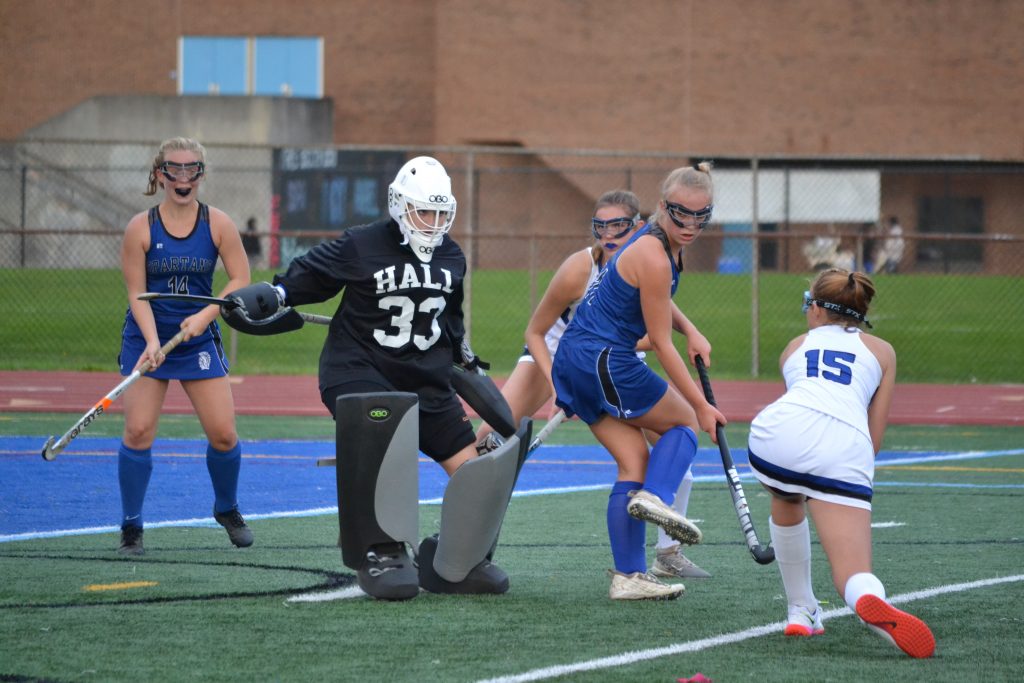 It may be the best kept secret in local sports. The Hall High School field hockey team is not only ranked No. 1 in Class LL, but also No. 1 in the State. That’s pretty good, but how about being ranked eighth in the nation? Now that is something special, and that is where Hall finds itself.

“It feels awesome to be No. 8,” added her coach, Jenna Behan.

At the core of the success is a unified team, which plays and acts like a family on the field. After Wednesday’s 7-1 win over Lewis Mills, they waited as a team for goalie Addie O’Connell to finish an interview before breaking out into a chorus of “Happy Birthday” and celebrating with cupcakes and selfies.

“They are so encouraging, and we all connect so well,” she said of her teammates. “Even if a goal goes in, we flush it and go on.” Not many goals have had to be flushed this season, however. The Warriors have allowed just eight goals on the season, while scoring 41 in their eight games so far. 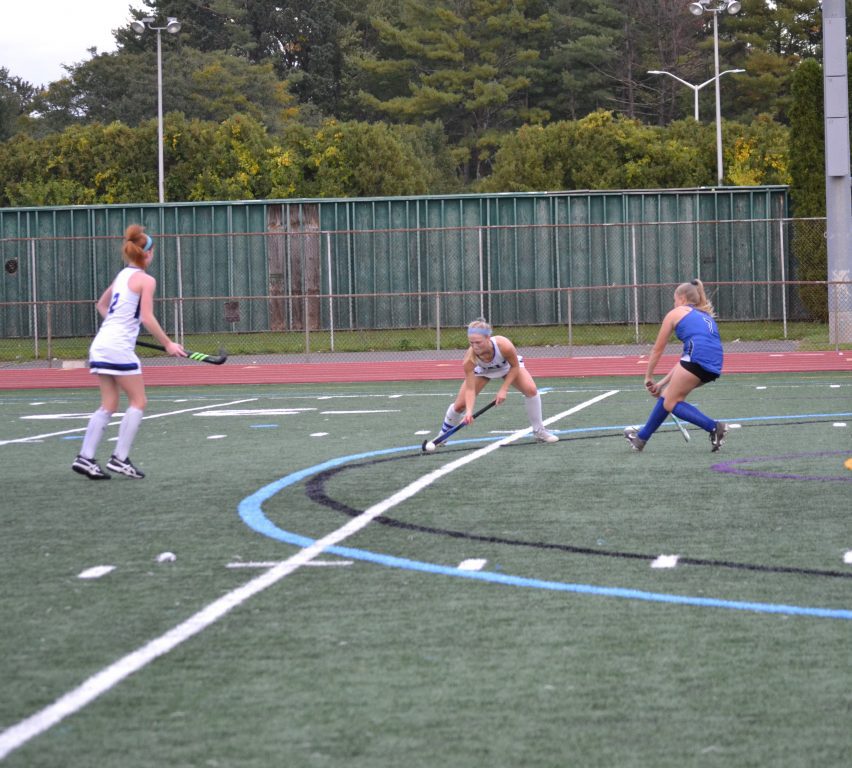 In addition to the play of O’Donnell in goal, Hall is strong up the middle – starting up front with Goldstein, moving to midfield with Bridget McGann, and then into the back with sweeper Brooke Martindale. A senior, Martindale has great range and plays a solid game, something Behan says Martindale had not shown before this season.

“[Martindale’s] really come out of her shell this year,” said Behan. “We were hard on her, and it has really paid off..”

Her goalie, O’Connell, knows the value of having Martindale and her other defenders in front of her. “I’m surprised sometimes that I get as many shots as I do in a game, especially when [Martindale] is out there.”

Hall came into Wednesday’s non-conference game with the Spartans after playing their toughest match of the season. They tied Longmeadow (MA) 1-1 on on Oct. 1. The Lancers are the 15th ranked team in the country, and the game was played on grass which  Behan said gave her players a little trouble. In that game O’Connell faced 16 shots – and kept them all out but one.

Wednesday’s game was typical of how Hall has handled its business this season. McGann and Goldstein scored in the first as the Warrior’s peppered the Spartan goal with 15 shots. Sophomore middie Grace Ganey scored her first goal of the season just 90 seconds into the second – a goal that had the entire Hall bench cheering.

It would be McGann scoring again from right in front of the Mills goal under 2 minutes later and the score was 4-0. Mills picked up its game after that and applied its best pressure of the day, but O’Connell made two strong kick saves and Martindale had a pair of key clearances. Hall responded when senior Grace Rocheleau found Grace Druckenmiller with a long outlet pass. She passed to her left to Goldstein who scored on her own rebound and it would be 5-0 at the half.

Sophomore Hannah Schoen replaced O’Connell in net for the second half and made a series of pad saves to protect the lead. Mills managed to finally find the back of the net, converting on a penalty corner with just 52 seconds left to play in the period. In the final 15 minutes, Hall would go down a player after a green card was issued for obstruction, but it was the 10-player Warriors scoring during the Mills advantage. Once again it was Goldstein finding the back of the net and wrapping up the day’s scoring at 7-1. 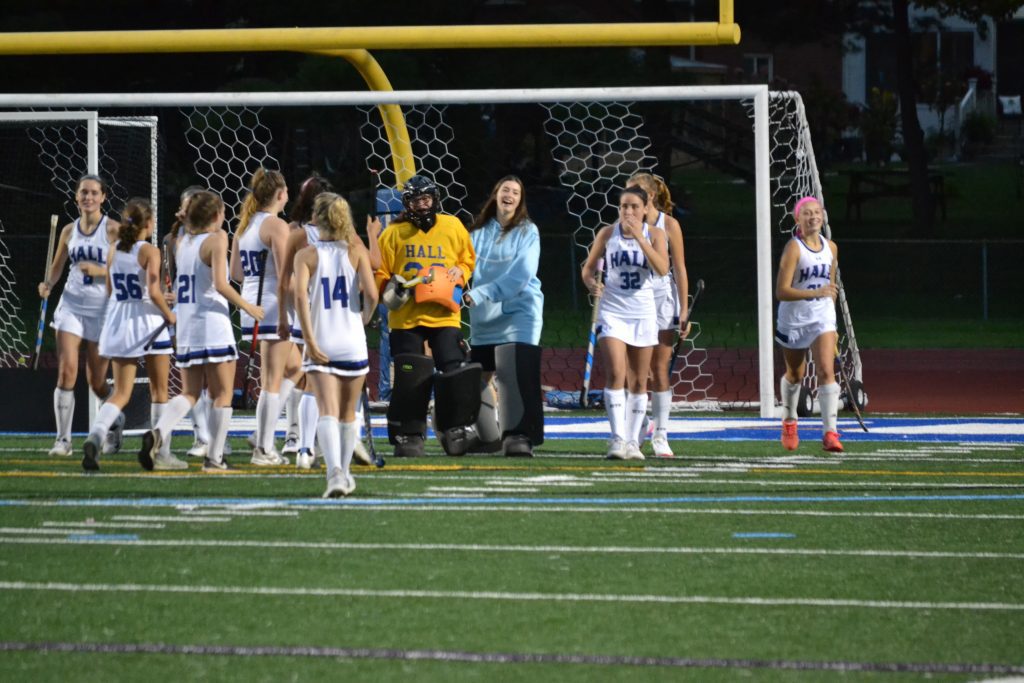 “I had high expectations coming into the season,” said Hall’s second-year coach. “We had a lot of players coming back. Ellie came up through the town lacrosse program, and I really like the way we play as a team.”

Both Behan and her players know that this is a special season so far, and they are aware of what lies ahead. The Warriors have upcoming games with Avon and its stingy defense, a return game with Granby, and, of course, the rivalry game with Conard – which is 6-1-1 so far this season. 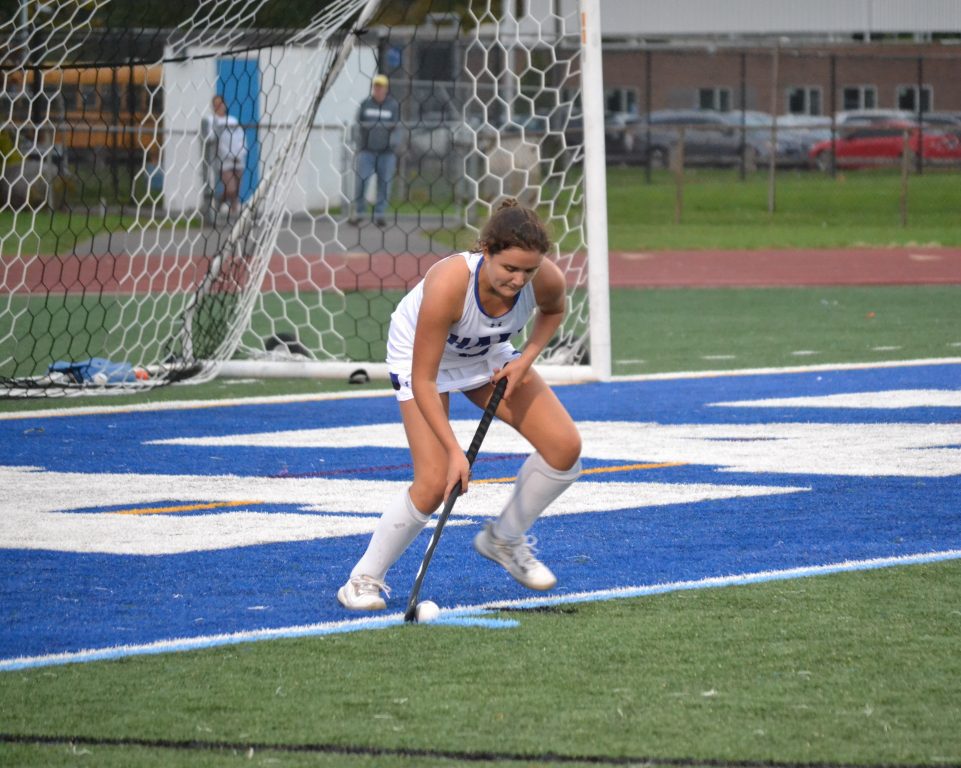 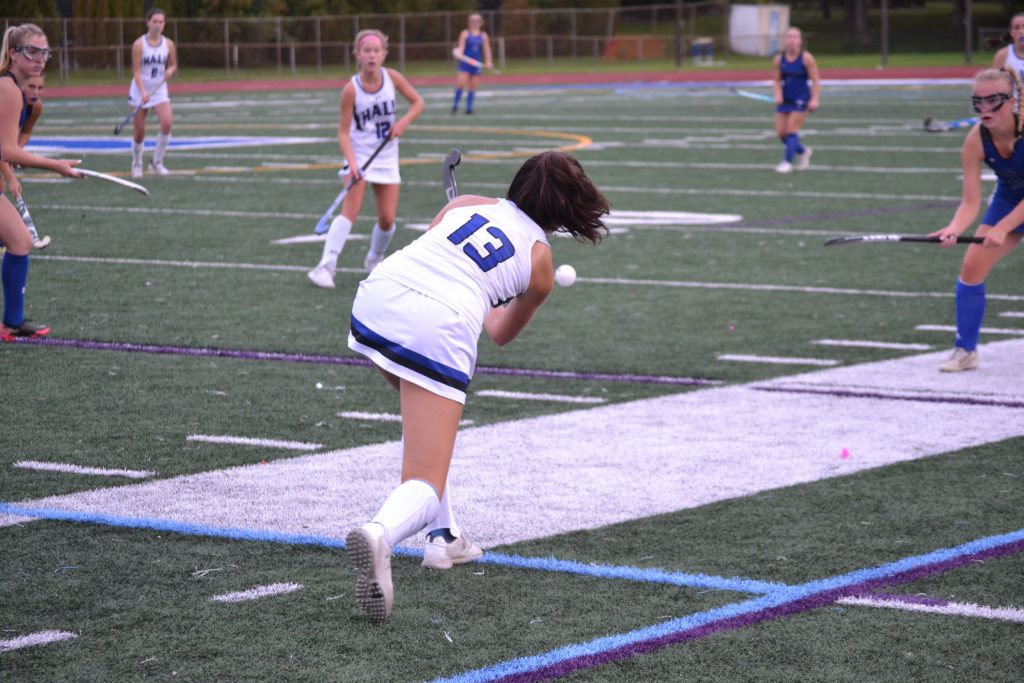 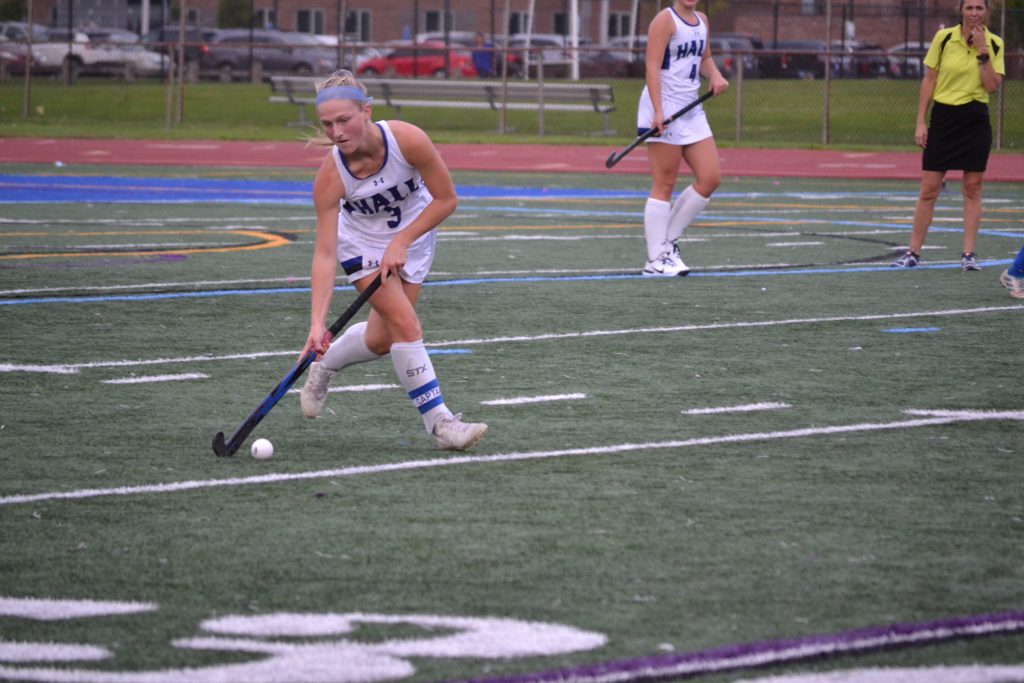 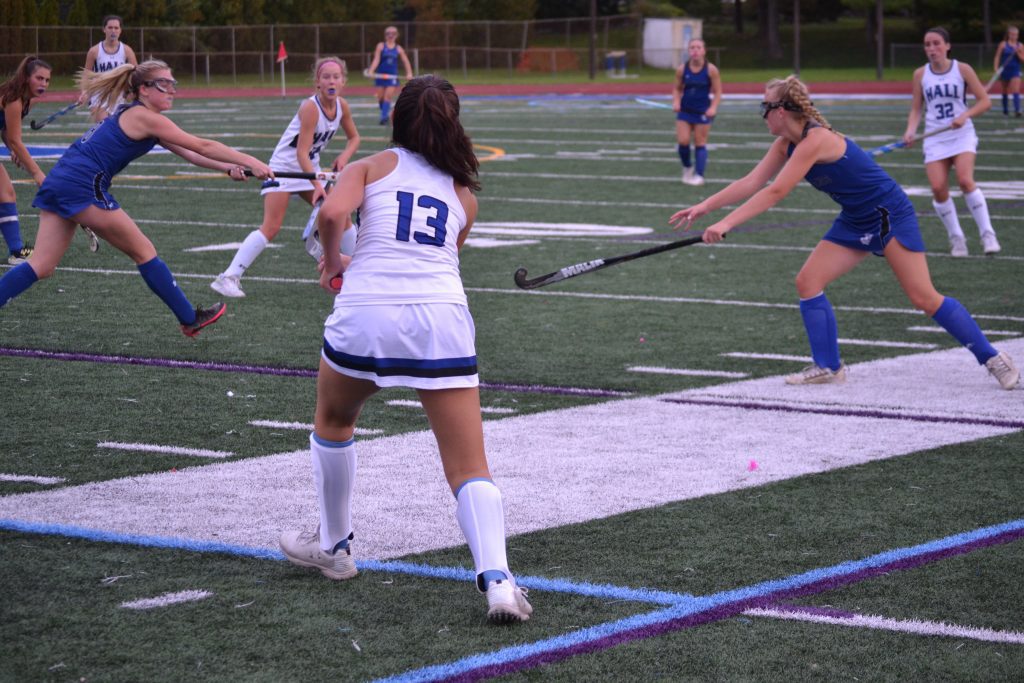 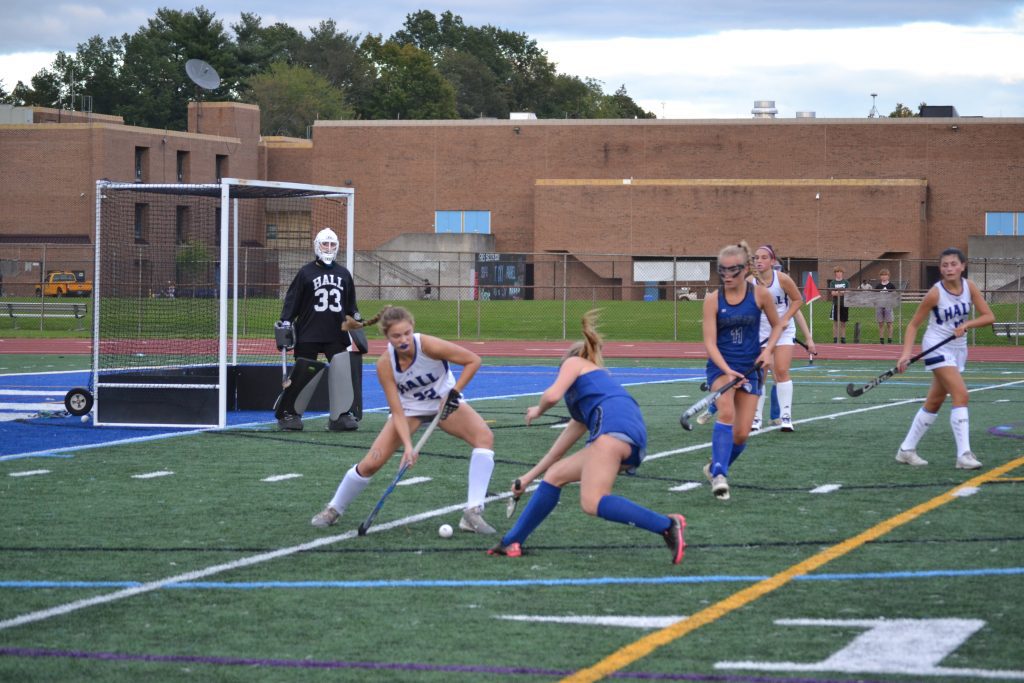