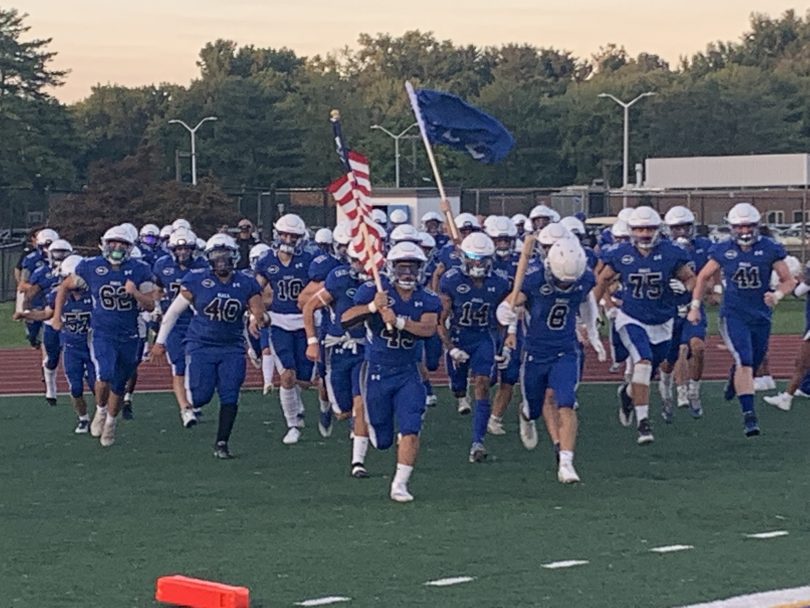 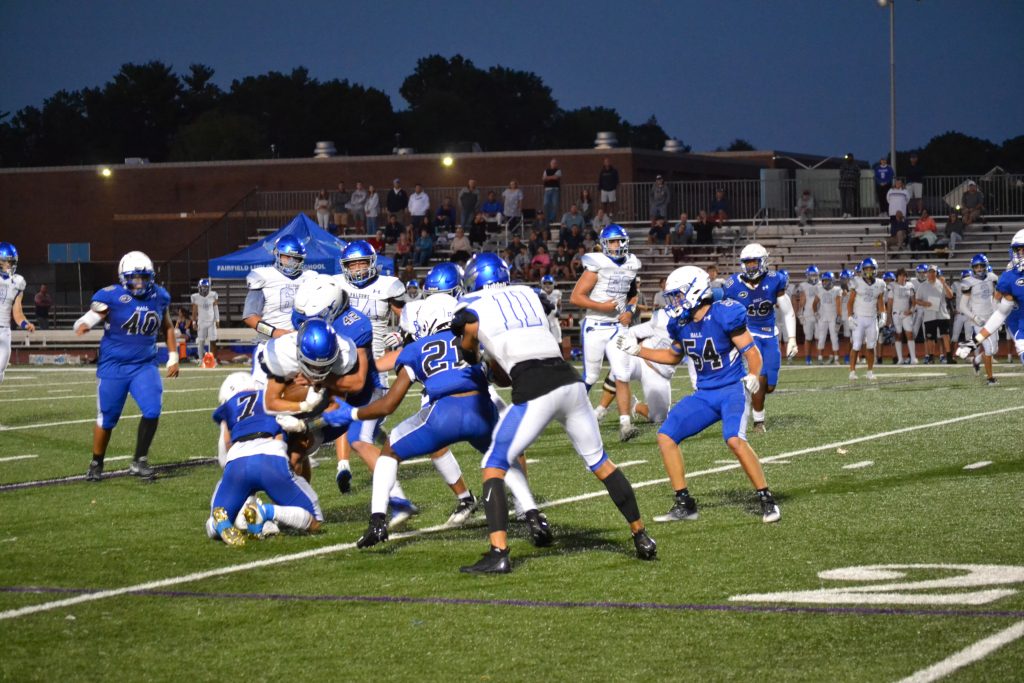 There will be some moments from their season opener that the Hall Titans will remember. Hosting a tough Fairfield Ludlowe team Thursday night, Hall had its moments, especially in the second half, but could not avoid some costly errors in the 34-21 loss.

“They were good and did some things that stressed us,” said Hall coach Frank Robinson. “But I was happy that we persevered.”

After a promising opening drive was stopped on a fourth and inches for Hall, the Falcons used quarterback Jackson Cooke’s arm, mixed with a few runs, to march down the field that ended with Michael Palladino’s six-yard TD run off the right side. Hall would respond with a drive of its own on the next possession that was capped off  with a Titans’ score and extra point to take the 7-6 lead.

With the ball back in the Falcons’ possession, Cooke once again used a rollout offense and some timely running from Aaron Field to move the ball into Hall territory. On fourth and 4 from the 25, Cooke found Ryan Faris for a 15-yard gain to the Hall 10.  Cooke would later take it in himself going up the middle from inside the 1 to give Fairfield the lead. 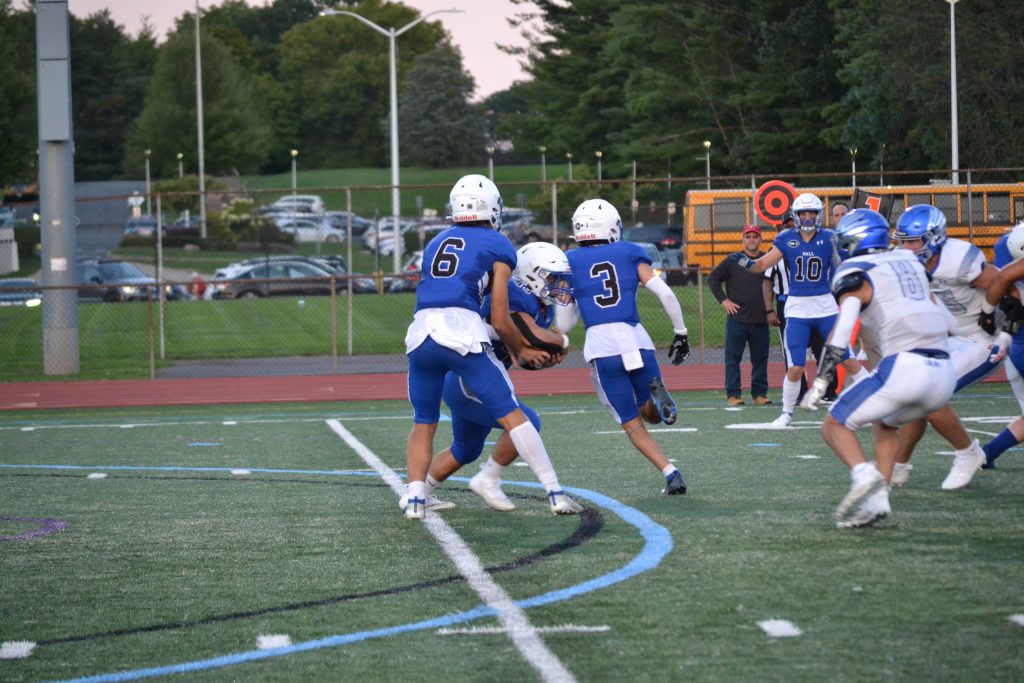 Junior Bode Smith, starting his first game for Hall, had been productive and had done a good job at protecting the ball. But on the ensuing drive, Smith was picked off along the right sideline by Faris at the Fairfield 41 with 2:34 to go in the first half. Two passes moved the ball to the Hall 35, and then Field – who ran for over 100 yards on the night – carried to the 10. Following a screen pass, to the Hall 3, Field would score, and with the 2-point conversion, the Falcons were up 20-7 and carried that lead into the locker room.

When the second half started Hall managed to push Fairfield back to its own 11 yard line before Fields busted off an 89-yard run to make it a 28-7 game. On second down of the next Hall possession, Smith would throw his second interception of the game and the Falcons had the ball at midfield.

“Bode did some good things and there are some things that he will need to do better,” said Robinson of his quarterback.

Hall’s defense came alive on the Fairfield possession after the turnover. First it was Jack O’Neil with a sack, then Grant Kanaga  made a big solo tackle to hold a pass play to just two yards and the Falcons would punt for the first time on fourth down. After the Hall offense was stopped, it looked like the Hall defense was once again going to hold Fairfield. 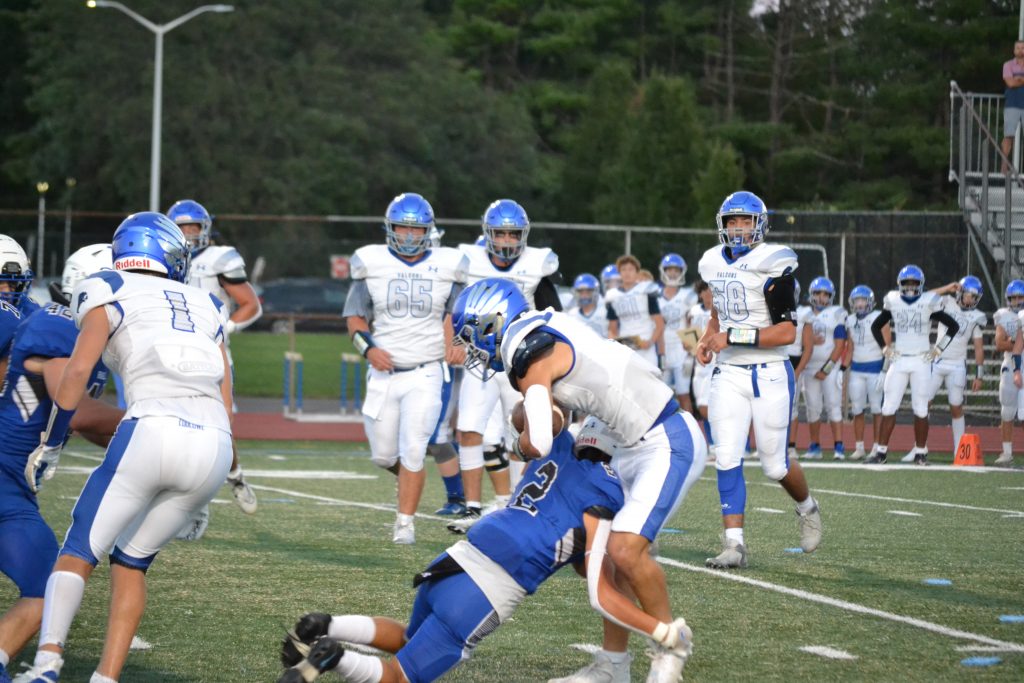 On fourth down, Caleb McNeil’s punt was partially blocked by the Titans, but it went straight to a Falcons player who ran for the first down. Hall would force another punt on the next fourth down.

Smith would find Tyler Redden on first down on a short pass, which Redden turned into a long run deep into Fairfield territory. Two plays later it was Anthony Mangini finding the end zone on a sweep, to cut the lead to 28-14. Hall’s defense once again did its job on the next Fairfield possession, forcing a punt that Mangini returned to the 50.

With the third quarter winding down, Smith moved the Titans downfield and on a fourth and 9 deep in Fairfield territory, the Falcons were called for pass interference, moving the ball to the 19 and giving Hall a fresh set of downs.

On third down, Smith rolled left, then threw back to Jordan Brice who blazed his way into the end zone to make it a 7-point game with 9:34 to play.

With momentum building for Hall, Kanaga would intercept Cooke’s pass on first down and Hall was in business with the ball at the visitors’ 17 yard line. Another pass interference call on Fairfield on third down put the ball at the 16.

On first down, Hall ran a reverse, but the play and a penalty on the play pushed them back to the 34. Two plays later, Smith was sacked and fumbled the ball – which was recovered by Fairfield at their own 41 with 7:42 to play.

“Our energy was good in the second half,” Robinson said. “But that penalty as we were going in turned it into a first and 30.” 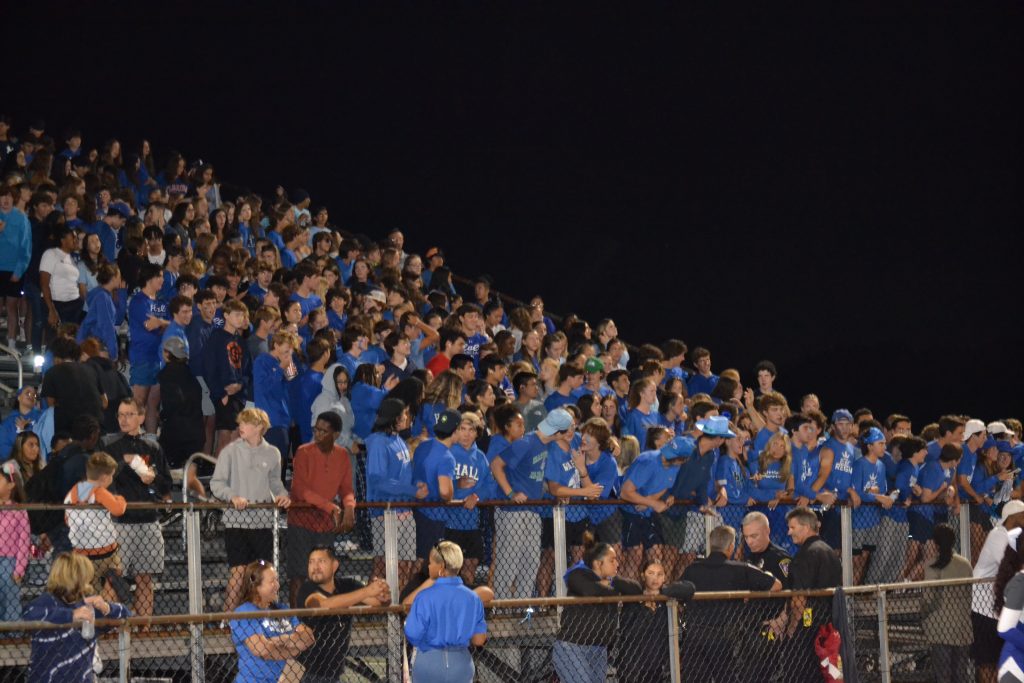 Fairfield would then put on a clinic in how to run out a clock, with Field and Cooke taking runs running the ball. The air went out of Chalmers Stadium when Field ran for 15 yards, and Hall was called for a face mask penalty that was tacked onto the end. Fairfield Had the ball first and goal from the nine with 3:28 to play. Four plays later, Field took a direct snap, and sprinted around the left side for the game’s final score.

“My message continues to be to get better every day,” Robinson said after the loss. “We need to learn to finish better and clean up some little things.”

Hall now goes on the road for its next three games, before returning home on Oct. 7 to host Glastonbury.