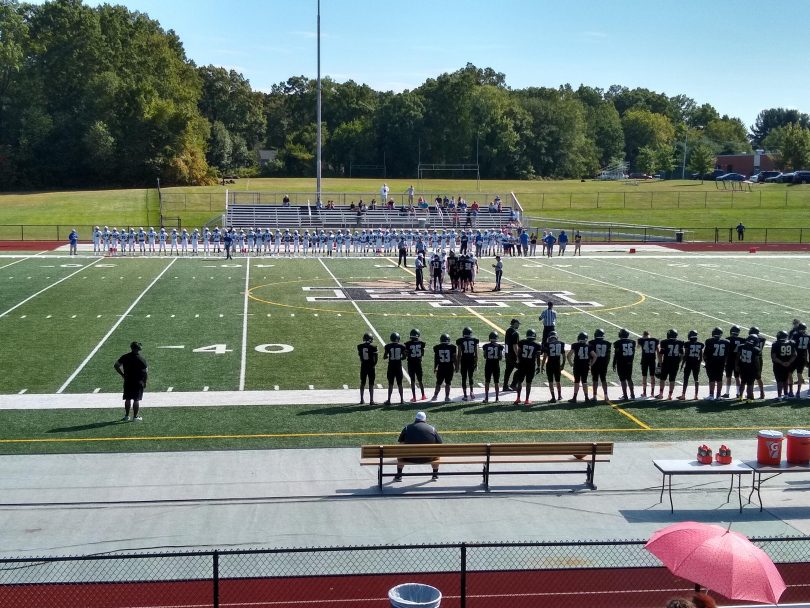 West Hartford’s Hall High School defeats East Hartford on the road to improve to 2-1 for the first time since 2016 (4-0).

Hall’s defense stepped up and the offense made enough plays to engineer a second-half comeback and earn a 16-15 road win over East Hartford Saturday afternoon.

Aidan Guzman led the way with three of the team’s five sacks, while Matt Keller – despite three turnovers – accounted for both of Hall’s touchdowns.

“Unfortunately, we really didn’t play well,” said Hall head coach Frank Robinson. “East Hartford obviously did some good things, and then we were fortunate in the end to start getting things going, thankfully. We were able to – at the end of the game – just finish it off, which was huge, but I thought our defense played great.”

The Warriors (2-1) seemingly couldn’t get out of their own way in the first half against East Hartford (0-3).

On their opening possession, a botched option play resulted in a scoop-and-score for East Hartford. The Hornets also picked off Keller twice – one was nearly brought back for six and the other closed out the first half.

Keller found Gabe Salomons on a 39-yard touchdown 10 seconds into the second quarter tie to the game 6-6. But after a 35-yard passing touchdown from Darrion Williams to Kam Massey to put the Hornets up 15-6 with 50 seconds left, the Warriors found themselves trailing by nine at the break.

Hall recorded a sack and forced East Hartford to punt on each of its first two third-quarter possessions. Halfway through the third quarter, meanwhile, the Warriors’ offense began to pick up.

Gifted with a short field, Hall drove to East Hartford’s 20 to set up a 37-yard field goal for Noe Ruelas, making it a 15-9 game with 3:32 in the third quarter.

The Warriors forced a three-and-out and took over on East Hartford’s 39 with 2:29 in the quarter. Committed to the ground game, five Warriors carried the ball on the drive until Keller eventually broke through on a 1-yard QB sneak with 10:37 left in the fourth quarter. Ruelas’ extra point gave Hall its first lead of the game.

The Hornets held the ball for seven minutes on the ensuing possession but came away empty as Pierce Newman recorded a fourth-down sack.

Hall melted away the last 3:42 on the ground, punctuated by an 8-yard first down run by Guzman in Hornet territory.

“I think we knew we had to run it to win the game. We can’t just air it out,” Robinson said. “We just felt like we had to get a little bit of run mixed in with the pass rather than just going one-sided. We can’t do that.”