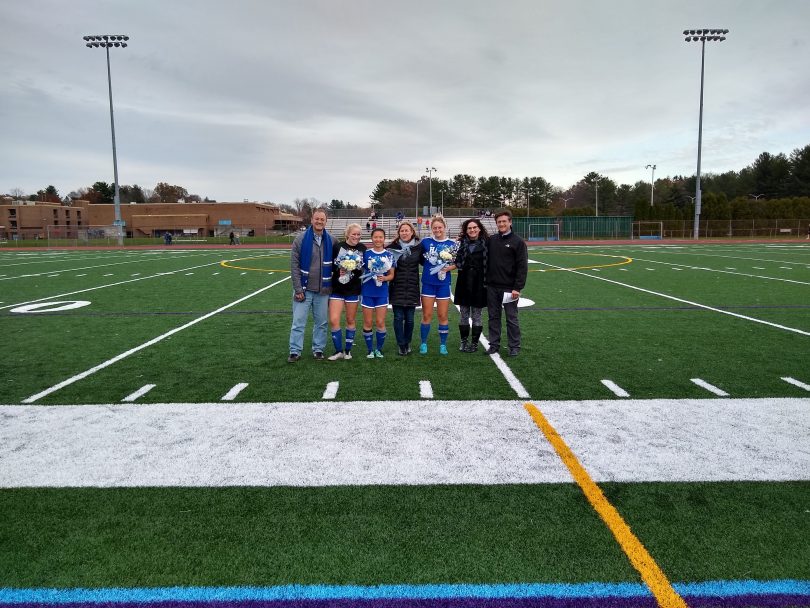 Maintaining offensive pressure throughout the game, the Hall girls soccer team broke through in the second half to beat crosstown rival Conard 2-0 on Senior Day Monday afternoon at Chalmers Stadium in West Hartford.

The Warriors were on the verge of scoring multiple goals in the first 40 minutes. Shots sailed just wide or over the net, while others were saved or deflected to keep the first half scoreless.

Luna Laila Caplan tapped in a rebound to put Hall (8-6-2) on the board 48 seconds into the second half, assisted by Nicky Deslauriers.

Lydia Poulin scored from Deslauriers to put the Warriors ahead 2-0 with 25:12 to play. Poulin’s goal came after narrowly missing a handful of shots in the first half.

“I thought that we had some energy,” said Hall head coach Scott Ferguson. “We had tons of opportunities. I think in the first half, we missed a couple wide open chances, and it made me nervous being nil-nil at halftime because I knew that if Conard got the first goal, that could change everything. … Once we got that first goal, I felt a lot more comfortable.”

Saige Rovero missed an opportunity to cut the deficit in half with 10:30 remaining as Hall goalie Hana Roggendorf came out of her net to play the ball. Roggendorf, a freshman, tallied five saves in the shutout performance.

“I think that they were ready to play,” said Cersosimo. “I think that this rivalry can get the good of you and the bad of you. I think it took us a while to get into that game, and unfortunately, it took us way too long.”

Playing their final game at Chalmers Stadium, Hall honored its senior class – comprised of Jessica Mason, Juliana Hu, and Emily Cubbage, who spoke fondly of her experience as a Warrior after the game.

“I’ve loved it personally. It’s been a great time,” said Cubbage. “Especially this year, we have a small squad, and … we only have three seniors, but I think that’s almost been better. We’ve all been able to be leaders and make this younger class realize how fun high school soccer is.”

Cubbage, a co-captain, said the strong play of underclassmen has pushed the Warriors forward throughout the season.

“There’s intensity there every game because everyone here wants playing time,” Cubbage said. “As young players, they know they have two or three more years to [get] playing time, so they know every time they step on the field, that’s their time to show Coach [Ferguson] what they can do.”

While Hall has completed its regular season, Conard will travel to face Northwest Catholic (7-5-3) Wednesday. The previous matchup between the Chieftains and Lions was postponed from Friday due to unplayable field conditions.

Both Conard and Hall will travel to their respective opponents in the first round of the Class LL tournament. The CIAC will announce the tournament matchups on Friday.

For Ferguson, the Warriors are trending in the right direction heading into the postseason.

“I would not want to play us,” he said. “We’re going to have to play an away game, but we could surprise people. I feel really great about that.”

Cersosimo, meanwhile, looks to count on veteran leadership to guide the Chieftains in the state tournament.

“Every game, it seems that somebody else steps up,” she said. “Obviously, Samantha Lee has been doing a great job for us in the net, and then right up the middle we have Coco Haverty, we have Maddie Lopol, and we have Saige [Rovero] and Isa [Glynn] up front, but we really are a well-balanced team all the way through.”