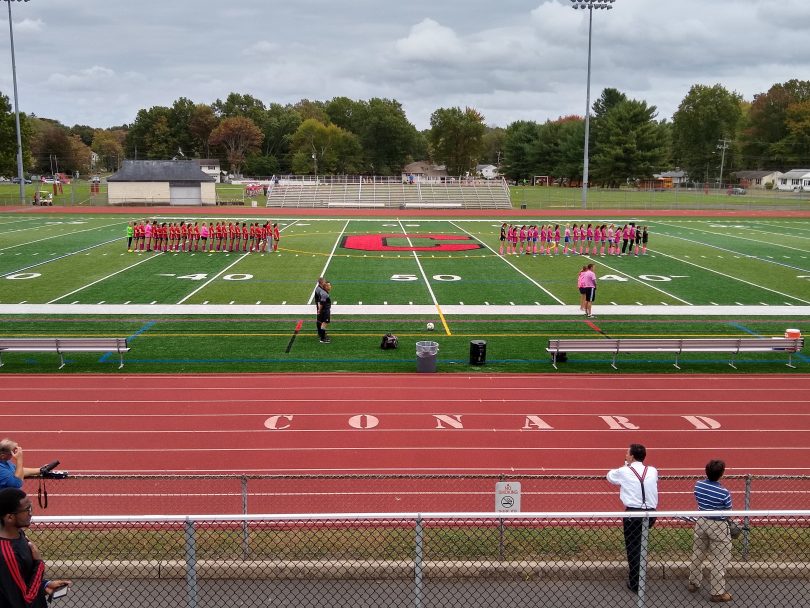 Against their crosstown rivals, the second half was like a brand new game for the Warriors.

Conard led 1-0 at halftime, but the Hall girls soccer team overcame the deficit in a 3-1 win Monday afternoon in West Hartford.

Controlling possession through the last 40 minutes, the Warriors were able to put several shots on goal – and three into the net. Maya Ellavsky, Nicky Deslauriers, and Luna Laila Caplan each scored in the second half for Hall (4-3-1).

“[Conard] just dominated us in the first half,” said Hall head coach Scott Ferguson. “They deserved a 1-0 lead, but we talked about halftime adjustments with just calming down, possessing, and finding gaps, and I give them a ton of credit. The girls just played beautifully in the second half.

“I wish we didn’t have to adjust at halftime, but I give them a lot of credit for having the ability and the cohesiveness and the talent to figure it out.”

Chloe Scrimgeour scored the Chieftains’ lone goal, finishing a cross from Saige Rovero into the box at the 22:40 mark in the first half.

As soon as the teams returned from intermission, however, the momentum swung the Warriors’ way.

Ellavsky tied the game with 19:34 left in the second half, tapping in a rebound to score.

Deslauriers scored the game-winning goal on a breakaway with 16:34 to play. She led the Warriors with three shots on goal and a bevy of offensive chances.

“One of my teammates gave me a perfect through ball, and I just hit it right by the defender and placed it [inside] the far post,” Deslauriers said.

Still on the attack, Laila Caplan chipped in a goal after multiple Hall chances in the box with 11:37 left.

“I thought we had great possession in the first half and that’s what led to our goal and our lead,” said Conard head coach Meg Cersosimo. “In the second half, Hall outplayed us. … They were playing more of a possession-style game in the second half, so it was more like a tale of two halves.”

Kerrie Massaro has stepped down as head coach and is assisting in coaching the Chieftains this season while undergoing treatment for breast cancer. She was on the Conard sideline during Monday’s game.

Cersosimo, filling in at head coach for Massaro this season, said her presence at the game meant a lot to her and the team.

“I love having Kerrie around,” said Cersosimo. “She’s so knowledgeable, and the girls really love her so it’s nice for them. They have a nice, big boost when she’s around. We’re all just happy to see her here and with us.”

Ferguson, whose team wore pink jerseys in support of breast cancer awareness, lauded the community response for Massaro and shared his support for her as well.

“It’s great because the players and the parents have come together,” he said. “Kerrie is a friend of mine, and she’s been such a great coach and a great person … I was thrilled that she was at the game. So good to see her. I know everyone wishes her well because she’s just a great person, great coach, so we’re just hoping things will go well for her.”