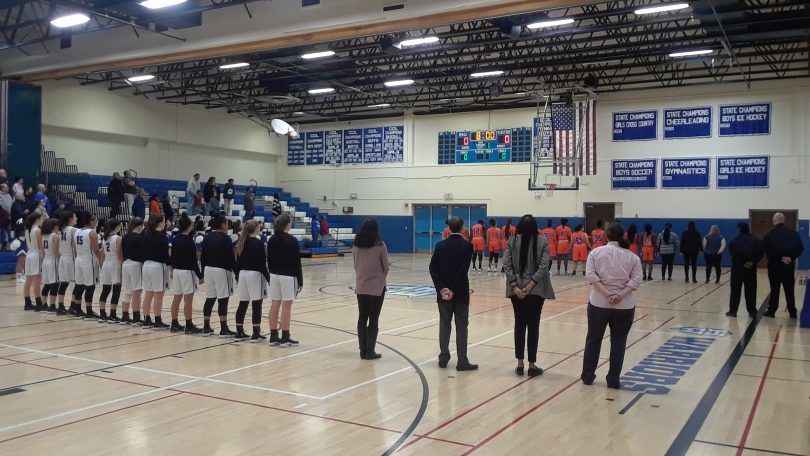 The Warriors defeat Bloomfield to end a six-game streak for the visiting Warhawks.

The Hall girls basketball team cooled off a red-hot Bloomfield squad with a 54-41 victory Thursday night in West Hartford.

The Warriors controlled much of the contest, but the Warhawks started an 11-0 run late in the second quarter to make it a one-possession game early in the third. After a timeout with 2:41 remaining, Hall closed the third quarter with an 11-0 run of its own to take a 44-31 lead.

The Warriors never looked back in the final eight minutes, going up by 17 on two occasions in the fourth quarter. The win pushes Hall’s streak to five while ending a six-game run for Bloomfield (9-2).

Hall head coach Brittany Huggins said rebounding and playing defense without fouling were the difference in the win over Bloomfield.

“Those were the two keys we [set] and we did a good job,” she said.

Facing one of the toughest challenges on its schedule, Huggins drew from the experience of playing two of the state’s top teams to prepare for the Warhawks.

“We played Hamden and we played Windsor, who are two really great, hard-working, athletics teams, very similar to Bloomfield, so we know what it’s like,” said Huggins. “Preparing for [Bloomfield] was a little tricky. We had to put six defenders on the floor against our five and simulate what we would probably see in tonight’s game.

“We know they’re a good team. We knew that, so we were ready for the challenge.”

Hall started the game on a 10-0 run in the first three minutes of play. The Warriors smothered the Warhawks defensively, only allowing three made field goals in the first quarter.

Both teams played aggressive defense, but Hall led 19-7 after one quarter.

Bloomfield quickly went on a 5-0 run to shrink the deficit early in the second. Jordan Farrell stretched Hall’s lead from the free throw line. She made six attempts from the charity stripe for the Warriors in the last three minutes of the half, as Hall took a 31-22 lead into halftime.

Hall continued to attack in the fourth quarter despite entering with a double-digit lead. Olivia Bonee made a 3-pointer with 5:23 remaining to put the Warriors up 47-33. Avery Polk made a layup to give Hall a 50-33 lead with 4:22 to play, giving the Warriors their largest lead of the game.

Bonee led all scorers with 16 points for Hall. Farrell and Jenna Zydanowicz each scored in double figures with 11 and 10, respectively.

Hall improves to 6-4 at the midpoint of the season. For the players, the momentum continues to build with each victory.

“I personally think that we are all starting to work together a lot more, and when we make mistakes, we’re starting to really pick each other up and adjust very well to things that we have to do to get us a win,” Farrell said.

The Warriors continue their season at home against Farmington (2-9) on Monday night with a 6:45 p.m. tip-off.

“I think if we have the same energy we’ve been having for the last few games, I think we’ll be really successful on Monday,” Huggins said.