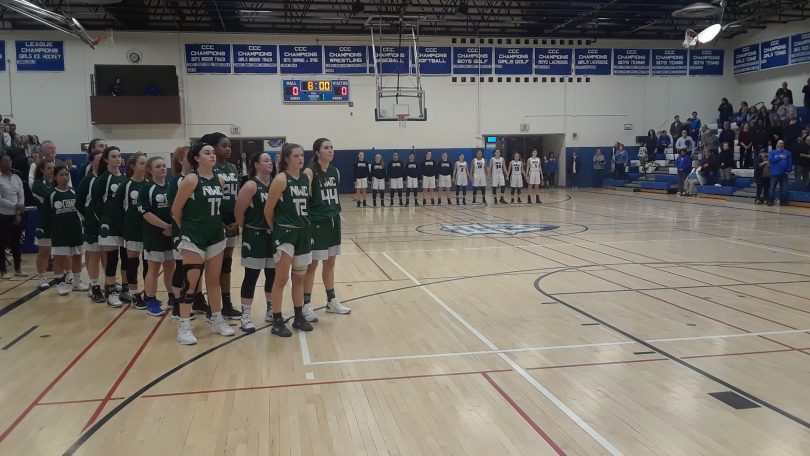 Hall defeats Northwest Catholic in consecutive matchups, extending its winning streak to three games and gaining momentum near the halfway point of the season.

Bonee led the way with a game-high 23 points, while Deslauriers followed with 20. Zydanowicz chipped in six points along with hustle plays on both sides of the ball for the Warriors.

Down 56-52, Deslauriers made a 3-pointer with 11 seconds remaining in regulation to bring the Warriors within one. Seconds later, Zydanowicz made a free throw to tie the game at 56 and push it to overtime.

Olivia Deslauriers with a big 3 to draw Hall to a 56-55 deficit. pic.twitter.com/WrGPCKyTKu

Leading 58-56 with 1:44 left in overtime, Bonee made a 3-pointer that effectively sealed the game for Hall as the team’s defense stymied any chance of a Northwest Catholic comeback.

With the win, the Warriors improve to 4-4 and sweep the season series with the Lions over a three-day span. Hall defeated Northwest Catholic 53-41 Wednesday night.

“It’s really difficult to beat a team twice in a season, but it’s even more difficult to beat them twice in one week with a day separating both games,” said Hall head coach Brittany Huggins. “Northwest Catholic is a very good team. They are well-coached. They have very talented players, so this was a very good win for us, but it was difficult seeing the same team twice. They played great, but I’m so glad our girls locked in on defense at the end and made big plays, even when things didn’t go our way.”

For Northwest Catholic head coach Al Phillips, his team’s play was an improvement from the previous matchup despite the loss. The Lions fall to 2-6 on the season.

“We were better prepared for a couple things they were doing, and that’s the difference between losing by 12 and taking it into overtime,” he said.

The Lions kept the Warriors at bay offensively in the first quarter, not allowing room for the ball inside as they took a 10-6 lead.

Down 13-7 in the second quarter, Bonee sparked Hall with a 3-pointer as she was fouled. Deslauriers extended the run, scoring the next five points to give the Warriors a 15-13 advantage.

As the teams traded opportunities in the third quarter, Bonee scored 10 of Hall’s 16 points to lift the Warriors to a 42-38 lead heading into the fourth.

After struggles against top teams like Hamden and Windsor earlier this season, Hall has won three games in a row as it builds momentum heading to the halfway point.

“I think we’re kind of getting over the hump,” Huggins said. “This was a good win to show our toughness, to show our resilience, ability to overcome things that don’t go our way, so I think we’re headed in the right direction.”

Despite losing key seniors who helped lead the Warriors to the state finals last season, Huggins sees younger players stepping up to gain experience and fill the void.

“Our young players and our new players are working hard,” she said. “They’re gradually getting better at doing what we’re asking them to do, especially on the defensive end, but they’re giving effort and that’s baseline right now. I’m very hopeful that these young kids are catching on because of the leadership from the girls that we’ve had in the past. That leadership has trickled down, so the young kids are catching on a lot sooner.”

Taking over a Northwest Catholic program that went winless in 2017-18, Phillips said the team is learning what it takes to win games. Going to overtime with Hall was another measure of the team’s progress.

“I guess we’re finding out it’s tough to win a game,” he said. “It takes all 36 minutes in some cases to be consistent enough to win. I would say we got a step closer to being a better team tonight, but a win would have been nice, too.”

The Warriors continue their season at Southington (2-5) on Monday night, while the Lions will host Conard (4-3).