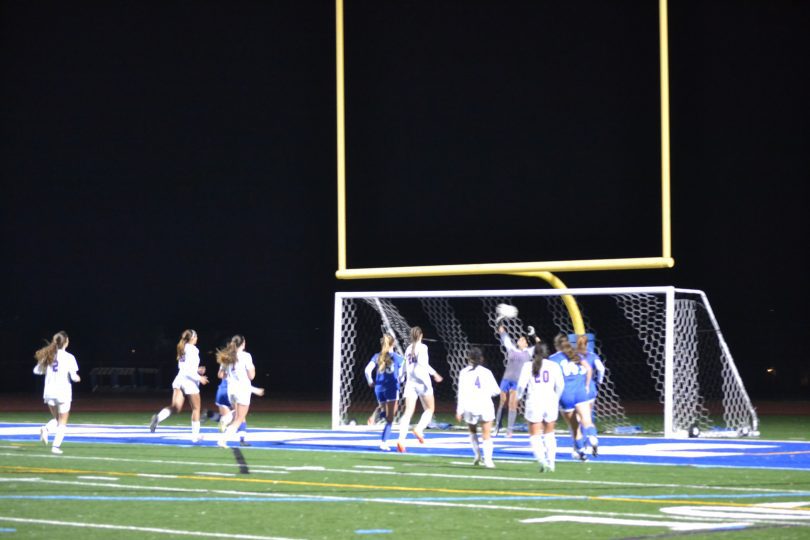 The 15th-seeded Hall girls soccer team hosted 18th-seed Danbury in West Hartford Monday night in the first round of the Class LL championship. 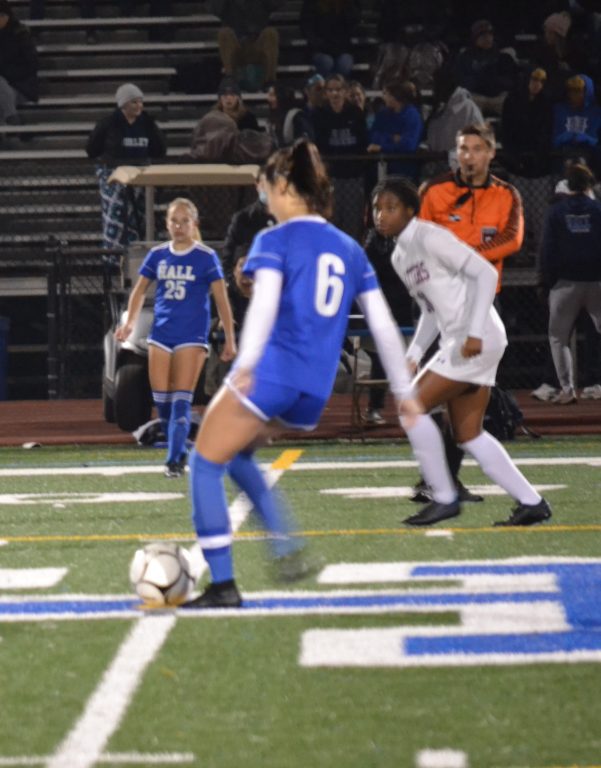 Monday, the  Hall girls soccer team tasted the sting of the end of the season, falling to Danbury 3-1 in the opening game of the CIAC Tournament. “We started well,” said head coach Scott Ferguson. “But we had two mistakes, team mistakes, and they took advantage of it in the first half.”

Hatters junior forward Caroline Dickson was the one on the end of those early mistakes. With just under 13 minutes to play in the first half, a long ball found its way though the Hall defense, and Dickson ran onto it, sped ahead of two defenders, and slotted a low shot into the far corner of the net to give Danbury the 1-0 lead. 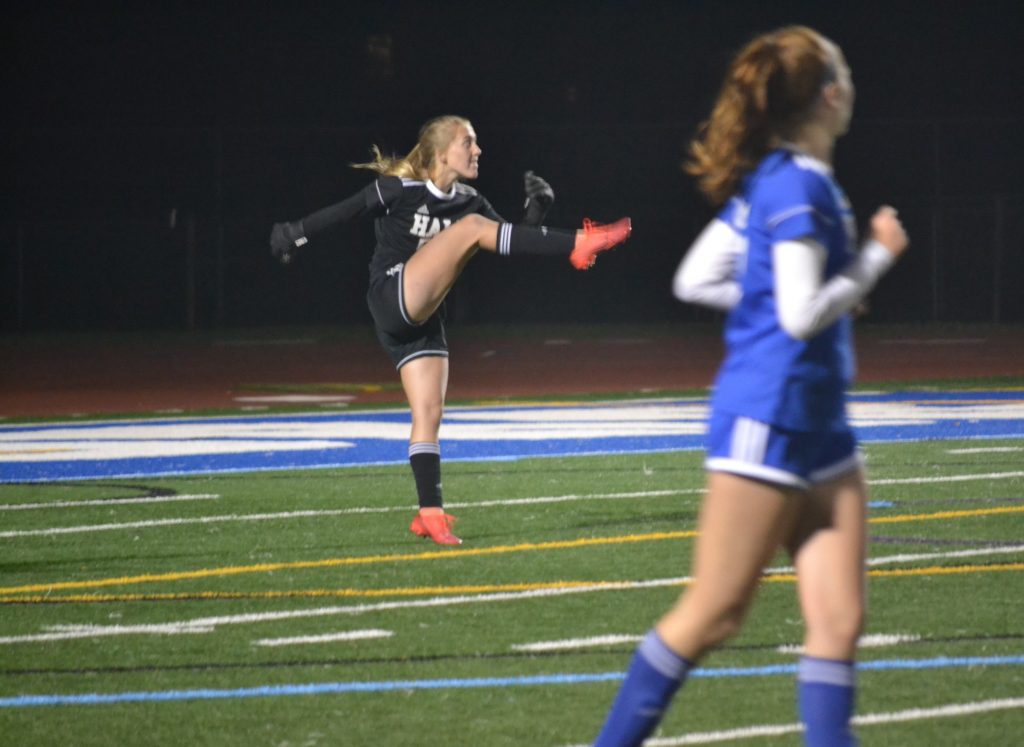 A little over 6 minutes later, it was Dickson again being in the right place at the right time. A long ball took a high bounce into the Hall box and slipped through the hands of goalie Allie Keith. Dickson managed to outreach Keith for the loose ball and poke it into the empty net.

But Ferguson and his team were not going to go away quietly. Their early chances came mostly from the efforts of Nicky Deslauriers. She had a turnaround shot deflected over the crossbar by the Danbury goalie. She would later whistle a shot just wide of the net and then with under a minute to play in the opening half, Deslauriers dribbled across the box and let go with a low shot at the left corner. Danbury’s keeper was able to smother it, to keep the score at 2-0. 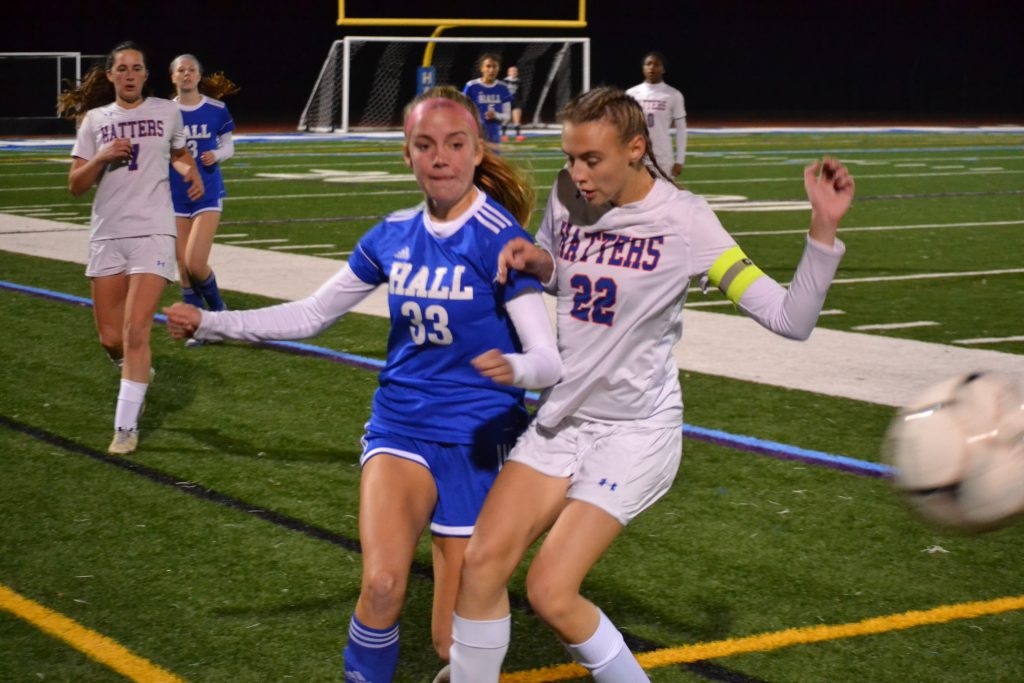 “I told them at the half that the next goal was important,” said Ferguson of his halftime speech. And his team responded.

Picking up their play, Deslauriers was fouled about 25 yards away from goal. Sophomore Sarah Punt stepped up the take the free kick. In the first half in a similar spot, her shot drifted over the bar but this time her effort was spectacular, the ball floating just over the outstretched hands of the Danbury goalie and under the crossbar to light a fire in her team, which had just cut the lead in half. 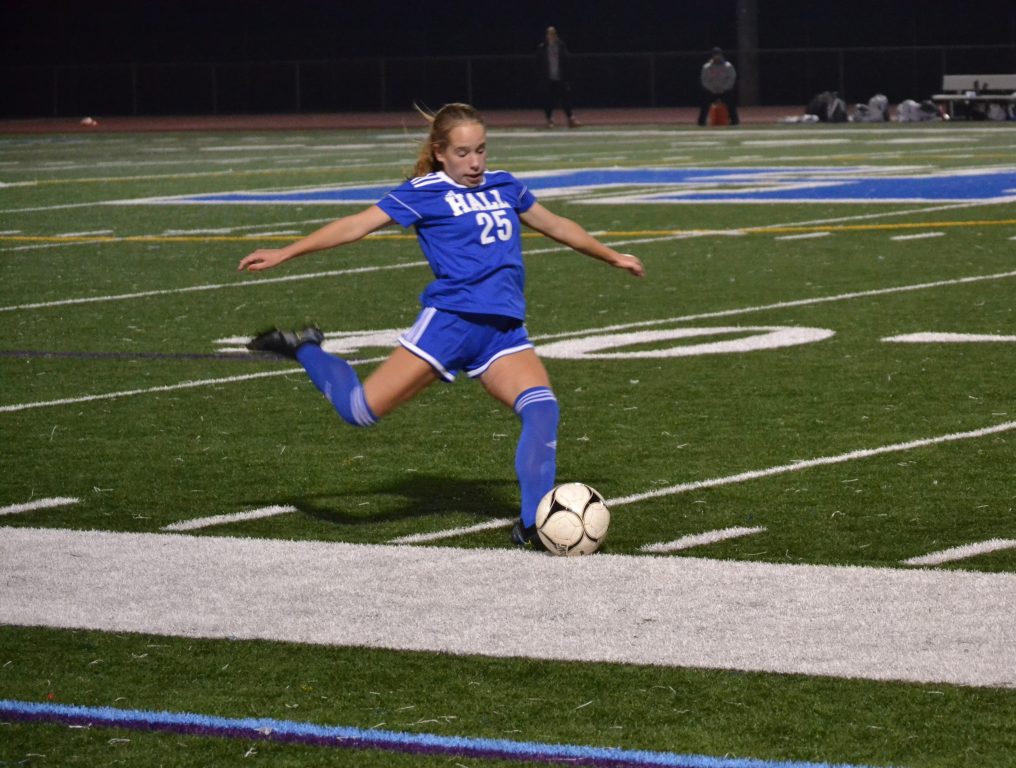 “Before she took it, I just looked at her and said get it on net,” said the coach. The goal energized Hall and its fan base, but Danbury was not going to go away.

On offense, Dickson and Natalia Catarino continued to make long runs to catch up to stretch passes. On defense, Deslauriers found herself often being double- and triple-teamed on her runs at goal.

”I’m proud of a lot of players, but I’m particularly proud of her,” said Ferguson of his senior captain. “She became unplayable this season; she just keeps fighting.” 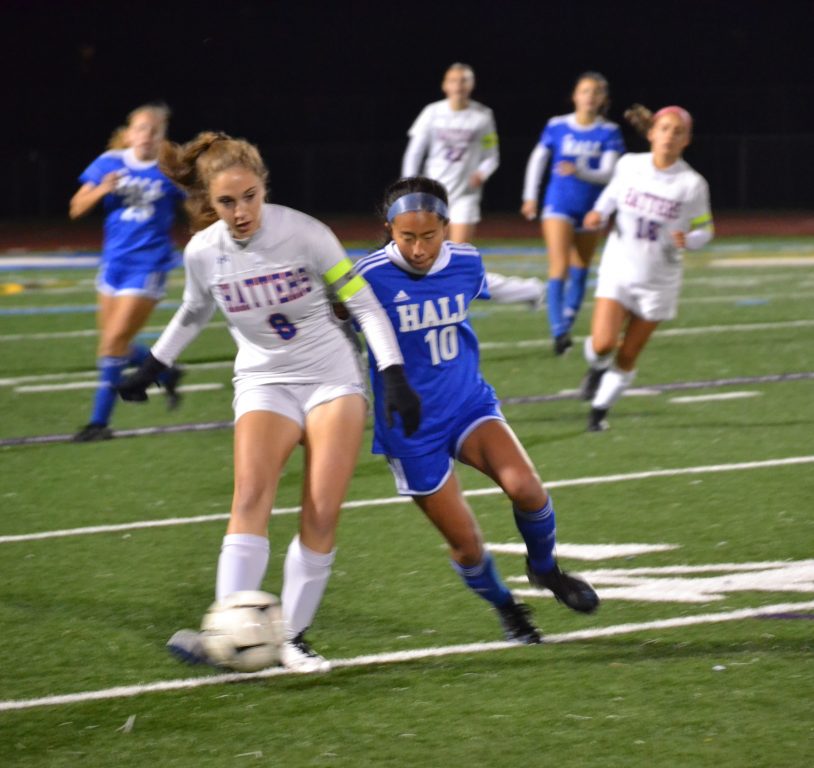 Deslauriers and winger Talia Sortman both would send great crossing balls across the face of the Danbury goal, but neither found a Warrior on the other end to convert. The goal that would seal the game for Danbury came when a Hall defender was injured on a 50-50 ball. The referee allowed play to continue and once again it was Dickson finding the loose ball and outracing a trailing player into the box where she was able to deposit a shot into the far corner of the net to make it 3-1.

After the game, Ferguson told his players that sometimes things just don’t work out for you. “I told them sometimes the bounces don’t go your way, but we walked off knowing that the effort was there, and they competed as a team, and nothing changes that.” 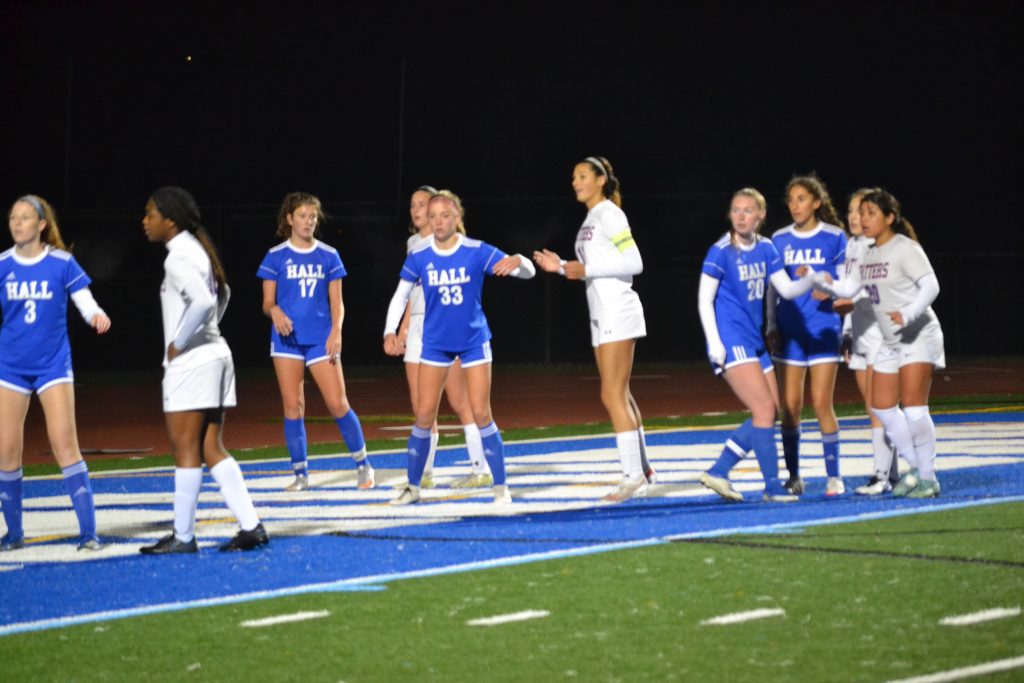 Hall ends the season at 7-4-6. Their biggest win of the season came when they knocked off top-ranked Glastonbury on Oct. 21 – something no Hall girls team had done in two decades.

Next year’s edition of the squad will look quite different then the one that  played Monday. Seven seniors started, and an eighth – Cate Mancini – was out with an injury. Altogether 10 seniors will not return for the Warriors next season.

Ferguson takes an optimistic approach to what his roster will look like. “ I’m losing a lot of senior leadership. But I have a lot of sophomores who’ll have to be seniors quickly.” 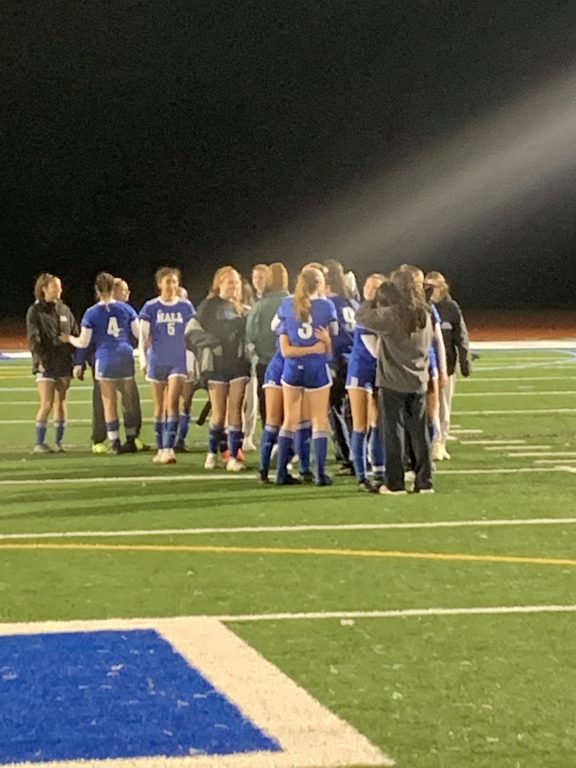